This style of ecosystem conservation is a bit more aggressive. Photo by Josh Atwood

From the open door of a Hughes 500 helicopter, James Leary stares down the barrel of his gun out onto the multi-tiered canopy of Maui’s dense tropical rainforest. A flash of purple catches his eye, and the pilot swoops the helicopter into position, giving Leary a clear line of fire. Leary pulls the trigger, and lights their target up with a rapid-fire blast.

“I can’t lie, it’s a helluva lot of fun,” Leary says. “Delivering a payload to the enemy is thrilling.” That payload? Poison-filled paintballs.

Shooting plants with herbicide from a helicopter may come off as gratuitous, but Leary, an invasive weed specialist at the University of Hawai‘i, stresses that the team’s work is detailed and highly coordinated. Invasive Miconia calvescens, a towering plant with broad, waxy leaves, and a pair of telling nicknames—the “green cancer” or the “purple plague”—has been shouldering out native vegetation and transforming the Hawai‘ian island’s fragile watershed ecosystem for decades. 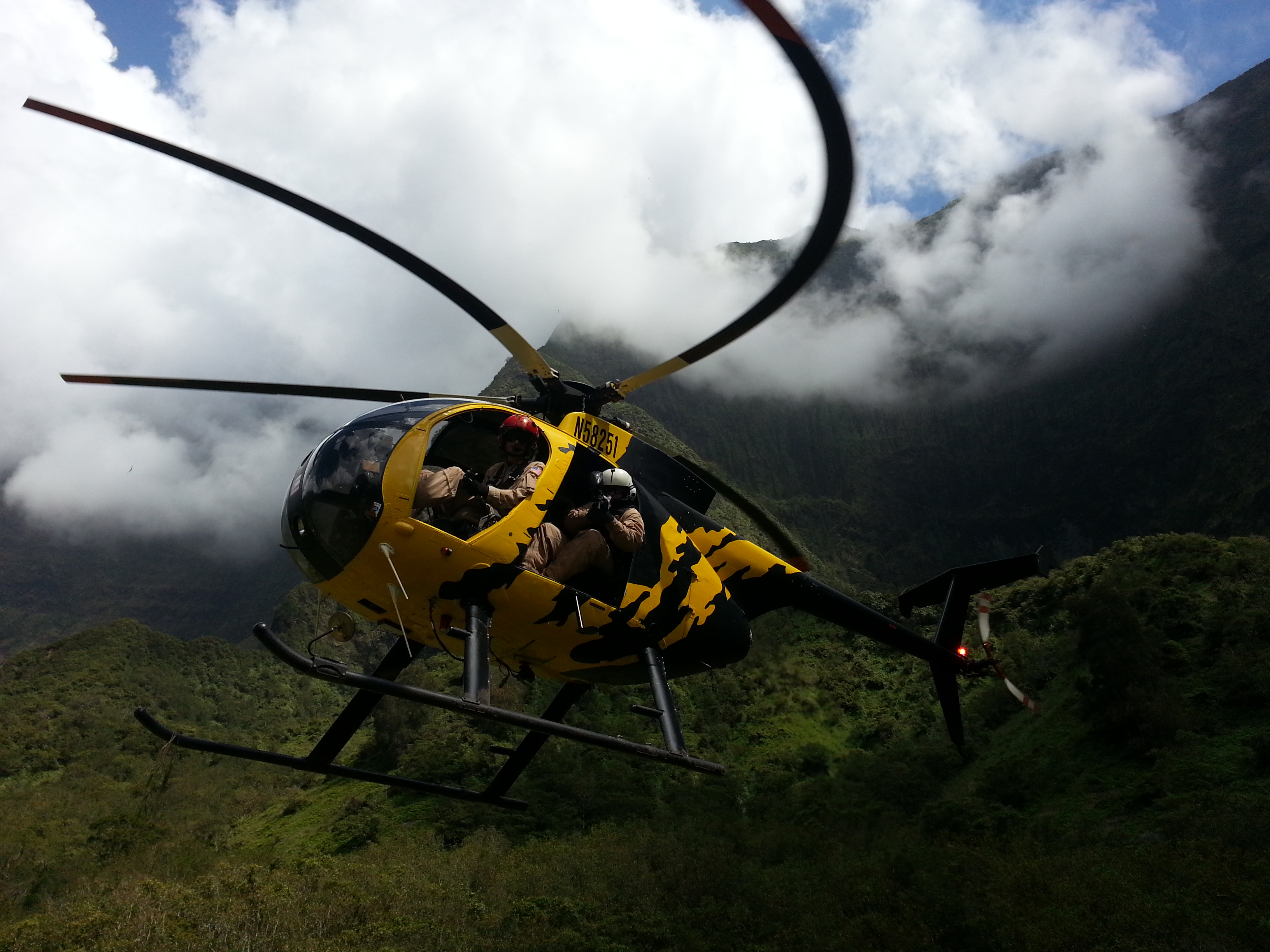 The researchers need to use a helicopter to navigate the dense tropical forest and steep volcanic slopes. Photo by Chris Brosius

Miconia calvescens, commonly known as “miconia,” originally hails from South and Central America, and was introduced to Maui in the 1960s and ’70s as an ornamental plant. One mature plant, which is able to self-fertilize, can produce more than a million seeds in a matter of months. And new shoots grow quickly, which means the plant reaches maturity in three to four years. As well, miconia’s shallow roots affect the forest’s integrity, and modify the ecosystem by crowding out other vegetation. In large enough numbers, this purple plague can suck parts of the watershed dry.

From its initial introduction, miconia has spread to approximately 80 square kilometers of Maui’s eastern slope.

Leary, originally from Michigan, first came up with his novel plan to fight Hawai‘i’s miconia around a decade ago. The green-draped jungle of Maui’s eastern slope is extremely rugged and mostly uninhabited. The clouds forced up by the steep sides of the Haleakalā volcano make the area one of the wettest on the planet. Reaching parts of this area on foot would mean climbing cliffs and passing over waterfalls. Putting boots on the ground carries some risk, both to the scientists and the ecosystem.

“Every time we go into these pristine areas by foot, we are imposing impact,” Leary says.

As it happens, miconia often grows at the edges of cliffs where Leary suspects perching birds drop seeds.

The team needed a way to kill the plants from afar, and herbicide-filled paintballs seemed the perfect answer. Leary contacted chemical and paintball companies, and eventually brought them together to make a product that could be tested for use in the field. Each paintball delivers about the same amount of active ingredient as an aspirin tablet, he says, and this small quantity is by design. A “high precision, high accuracy, and surgical mentality” allows the team to target the miconia from a distance of up to 30 meters, while minimizing splash damage to the surrounding vegetation.

“The videos, as fun as they are in interpreting what we do, don’t compare with what you see with your own eyes,” says James Leary of the work he and others are conducting to remove invasive Miconia calvescens from Maui’s remote eastern slope. Video courtesy of James Leary

Since the team started hunting plants in 2012, they’ve hit around 15,000 targets. So far, Leary says their efforts have had a modest effect on the miconia’s prevalence. Based on current funding, the team only gets about 120 hours of flight time a year. At this rate, he says it will likely take up to three decades to eliminate the plants.

But such special ops tactics may be the only way to tackle the plant in such difficult terrain. Leary says the seek-and-destroy operation is always thrilling, but adds that it’s just as satisfying to come back around a month later to verify the kill and find nothing but the miconia’s dried up remains.