In the mountains of southwestern Nevada, the dark fossilized remnants of extinct archaeocyath reefs dot the tops of the hills. Millions of years ago, these peaks were at the bottom of the sea. Photo by Sara Pruss

In the mountains of Esmeralda County, high above the parched expanse of southwestern Nevada and just across the border from California’s Death Valley, Emmy Smith is on the hunt for the signs of what seems unimaginable in such a scorched place: a tropical reef.

Around 520 million years ago, not long (geologically speaking) after the Cambrian explosion ushered in a sudden abundance of complex life, the tops of these mountains were the seafloor. The Paleozoic sea teemed with invertebrate life, and the organisms living here found refuge in an entirely new kind of ecosystem—an animal-built reef.

“This was a major biological innovation, and it was recorded out in California and Nevada,” says Smith, a paleontologist at Johns Hopkins University in Maryland.

At a field site roughly eight kilometers northeast of the largely deserted backwater of Gold Point, Nevada—a former mining town with a population of just six people—Smith and her colleagues recently examined the fossilized ruins of one of these ancient reefs.

“You’re in the desert walking around on mountains, but at the same time you feel like you’re scuba diving,” Smith says.

To the untrained eye, the rocks don’t look like much. But under a microscope, a thin cross section swarms with shapes resembling segmented donuts and dark, sinuous veins. This abstract motif is the fossilized vestige of the archaeocyaths, a diverse group of filter-feeding sponges. 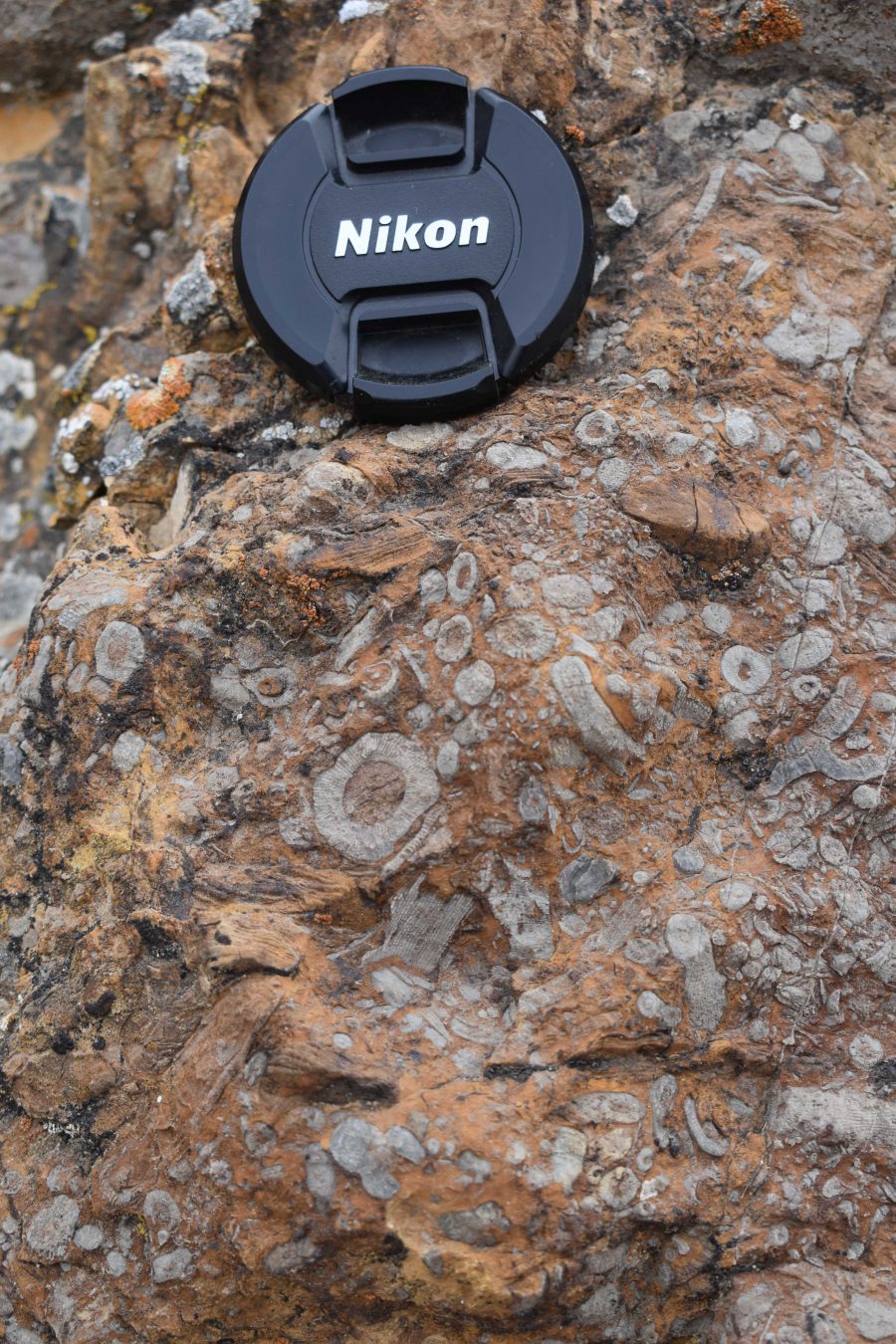 Up close, the rocks in the Nevada desert bristle with the fossilized remains of ancient life. Photo by Mary Lonsdale

Archaeocyaths were the world’s first reef builders. Common just after the Cambrian explosion, archaeocyaths predate reef-building corals by 40 million years. Like their modern equivalents, archaeocyaths grew on the calcified skeletons of their forebearers, adding their own tubular and branching bodies to build immense structures over generations.

These thriving ecosystems were relatively short lived. Globally, archaeocyathan reefs only persisted for around 20 million years, a mere blip in oceanic history. It is a mystery why they went extinct, but the Gold Point reef, which offers one of the last known examples of these reef-building sponges, holds a clue.

Fossilized archaeocyathan reefs have been found everywhere from Siberia to Morocco. But the reef high up in the mountains of southwestern Nevada is a particular boon to scientists’ understanding of the volatile conditions after the Cambrian explosion. The fossilized reef is 70 meters thick in certain spots, says Sara Pruss, a paleontologist at Massachusetts’ Smith College who was involved in the research. “You can look at the fine-scale changes through time because you get this big, thick period of deposition,” she says. “You can actually see how the environment changes.”

Within the fossilized remains, Pruss and Smith have found evidence of an abrupt change in the climate. By around 515 million years ago, a large slab of ancestral North America known as Laurentia had splintered from a southern supercontinent, spewing massive amounts of carbon into the atmosphere, which siphoned oxygen from the oceans and acidified the water in an event known as the archaeocyath extinction carbon isotope excursion.

This event, says Pruss, mirrors how the ocean’s chemistry has changed today, though in a much more dramatic fashion: “There are so many commonalities between the archaeocyath extinction and the decline [of] modern coral reefs,” says Pruss.

The detailed preservation of the Gold Point reef also paints a picture of what it would have looked like in its heyday.

The fossils encapsulate a spectrum of coastal habitats and archaeocyath species, from nearshore inhabitants that preferred the wave-battered shallows, to those that could only tolerate quiet deepwater enclaves. This breadth of archaeocyath lifestyles echoes modern-day coral diversity, says Pruss. “If you go to the Bahamas and snorkel around, you see the same [pattern] of different corals living in different places.” 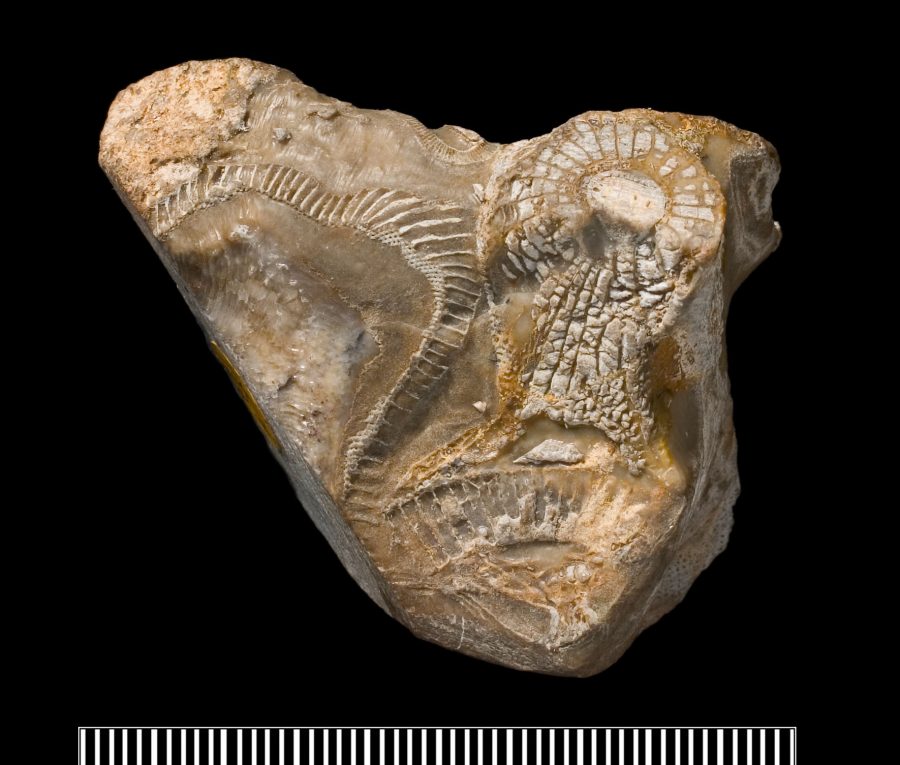 A fossilized archaeocyath as seen in Cambrian limestone unearthed in South Australia. Photo by The Natural History Museum/Alamy Stock Photo

Yet while the Gold Point reef shares structural similarities with a modern coral-encrusted Caribbean key, David Cordie, a paleontologist at Wisconsin’s Edgewood College, says it probably would not have made for great snorkeling. Nearshore and extremely shallow, these reefs would have been swamped by nutrients and sediment washing in from the coasts. “If you were to go back in time, it was probably murky, really shallow, with not nearly as much activity as you might expect in reef environments today,” says Cordie, who was not involved in the new Gold Point research. “So maybe a little underwhelming by some peoples’ standards.”

However, if you could peer through the cloudy water, you would be greeted by an outlandish group of reef inhabitants. Spiny trilobites scuttled along the seafloor, swerving around the featherlike arms of crinoids and cactus-like stalks of chancelloriids, an enigmatic group of sessile creatures encased in hundreds of star-shaped plates of armor. Other excavations nearby have yielded fossilized hyoliths, a bizarre group of ancient brachiopods seemingly ripped from the pages of a science fiction novel. Some hyolith species propped themselves up on the seafloor using a pair of long spines and deployed a roving set of tentacles between their two shells—the lower of which tapered off into a cone—to gather planktonic prey. (Their fossils look a little like an ice cream cone with arms.)

Like their modern analogs, archaeocyathan reefs “were hubs of diversity,” says Smith. And the Gold Point reef’s wonderful preservation—which includes its complex three-dimensional structure—has allowed the paleontologists to pinpoint the nooks and crannies where trilobites and early crinoids hunkered down between the stalks of sponges. “You really get a sense of the little houses that things lived in,” says Mary Lonsdale, a graduate student pursuing her doctorate in Smith’s lab at Johns Hopkins. “It’s a thriving ecosystem.”