Laboratory and field research has determined a number of ways—from physically altering the flow of water, to increasing the abundance of dissolved organic compounds—that fish farms can affect lobsters. Photo by Gaertner/Alamy Stock Photo

Open-net pen Atlantic salmon aquaculture is big business on Canada’s east coast. Given the industry’s size, much has been studied and written about its effects on wild salmon. But how might fish farms be affecting other species in their vicinity—such as lobster? Lobster is one of the most economically valuable wild species, and the bulk of the world’s catch is made along the eastern seaboard of North America. Inka Milewski, who studies the interactions between aquaculture and the wider ecosystem at Dalhousie University in Nova Scotia, recently parsed the scientific literature to determine the ways in which salmon aquaculture is affecting wild lobsters.

Milewski and her colleagues identified a multitude of factors that could affect lobsters, their habitat, and the lobster fishery. Net pens change oceanographic conditions, for example by reducing current speeds, increasing turbulence, and breaking up waves. The farms also generate waste, such as excess food, fish feces, and urine, as well as the chemicals used to control pests and diseases. Lights, noises, and odors associated with the farms can disrupt lobster behavior. 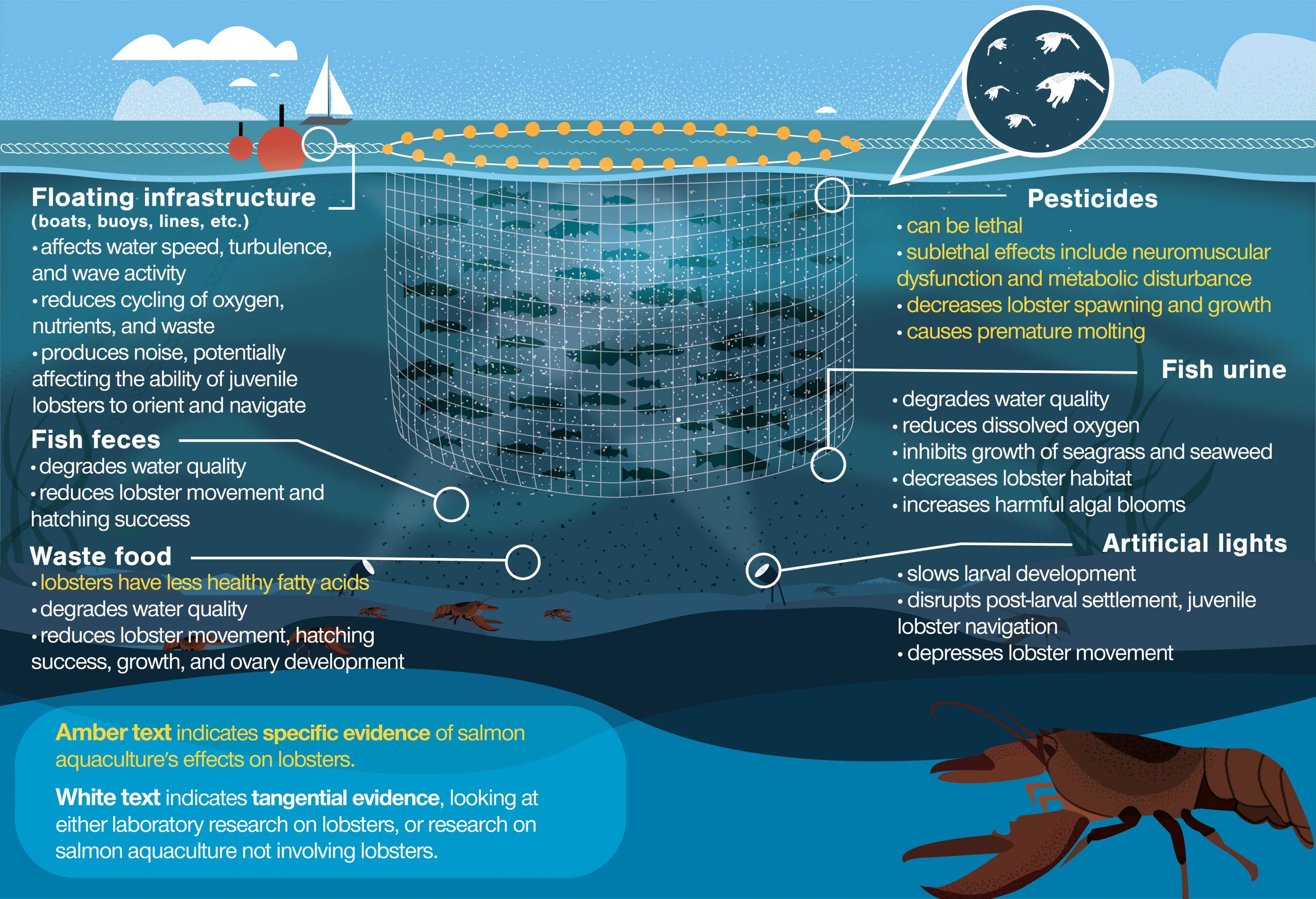 From the larval lobsters that inhabit the upper few meters of the water column, to the settled adults living on the seafloor, lobsters can be affected by fish farms in myriad ways. Illustration by Mercedes Minck

Milewski says she was most surprised by how sensitive lobsters are to the particulate and dissolved organic and inorganic waste that result from fish feces and uneaten food. These chemicals can disrupt critical lobster behaviors like feeding, spawning, and mating. Her review identified studies that show that these waste products can change the quality of lobsters’ diets and promote harmful algal blooms near farms.

“There is a tremendous amount of waste generated by fish farms,” Milewski says. “I don’t think people have a sense of the scale.” A fairly typical farm of about 600,000 fish will generate around 40 tonnes of waste every month during its 22-month production cycle. “It’s understandable how that waste can change lobsters’ behavior, distribution, and abundance,” she adds.

But the review also identified serious gaps in our understanding of the interactions between aquaculture operations and lobsters. While some aspects, such as the use of chemical pesticides, have been well studied, information on others, including waste discharges, disease, and noise, are limited or entirely lacking.

Cyr Couturier, an aquaculture scientist at Memorial University in Newfoundland and Labrador, says that while the review does a good job of identifying the array of potential issues, much of the science is based only on laboratory experiments, making it difficult to draw solid conclusions about how things are playing out in the real world.

Couturier points out that in the Bay of Fundy, for example, lobster catches have been increasing alongside the rise of salmon farming over the past several years. “If there is an impact from aquaculture, it is not yet evident,” he says. “But it is possible there could be an impact on lobster larvae if [aquaculture] is not used properly.”

One study of a small salmon farm off New Brunswick’s Grand Manan Island in the Bay of Fundy cited in Milewski’s review points to how aquaculture and lobster fishing may be able to coexist. Lobster numbers went up over the study’s eight-year sampling period, both near the farm and farther away, and there was no difference in abundance between the two sites. The authors point out that the well-managed salmon farm used minimal pesticides and that its location allowed waste to disperse rather than accumulate under the pens. Lobsters also benefited from an abundance of good habitat in the area.

Both Milewski and Couturier agree that restricting where farms are located and mandating some management practices, such as keeping farms out of known lobster spawning areas and juvenile habitats, and restricting pesticide use during lobster spawning season, could help reduce the impacts. “These are simple things that should be done,” says Milewski.

Couturier says many of these rules are already in place, and more stringent ones are on the way in some provinces. “If the rules become more stringent, that’s for the better,” he says.