For those who have braved swimming in British Columbia’s spectacular, glacier-fed fjords, “warm” is probably not a word that springs to mind. But at least four of British Columbia’s fjords are real hotspots for climate change. Since the 1950s, they’ve warmed up to six times faster than the rest of the ocean, according to new data.

Oceanographer Jennifer Jackson of the Hakai Institute* is preparing the data for publication and has been presenting it in a lecture tour for the Canadian Meteorological and Oceanographic Society that started this January.

One cause of the rampant warming is a marine heatwave known as the Blob that hit the northeast Pacific starting in 2013. About 3 ˚C warmer than usual, this patch of water stretched all the way from Alaska to California. No one knows exactly what caused the Blob to form, though it had something to do with higher air pressures, lower winds, and calm conditions that didn’t mix and cool waters as usual. Climate change is making marine heatwaves like the Blob more likely and more frequent.

In 2016, researchers declared the Blob dead. But the data Jackson analyzed suggests this was premature. The Blob actually sank, she says: the mass of warm water dropped more than a hundred meters below the surface. At depth, the warmth of the Blob lingered until at least March 2018. And that deep, warm water has seeped into the fjords.

Jackson has data from four of the more than 50 fjords that cut into the BC mainland. These four—Rivers Inlet, Knight Inlet, Bute Inlet, and Douglas Channel (see map)—are among the best-studied fjords in the world. From 1951 to 2019, the deep water (at a depth of more than 200 meters) warmed by around 0.18 ˚C per decade, a rate six times higher than the global average for water at that depth. 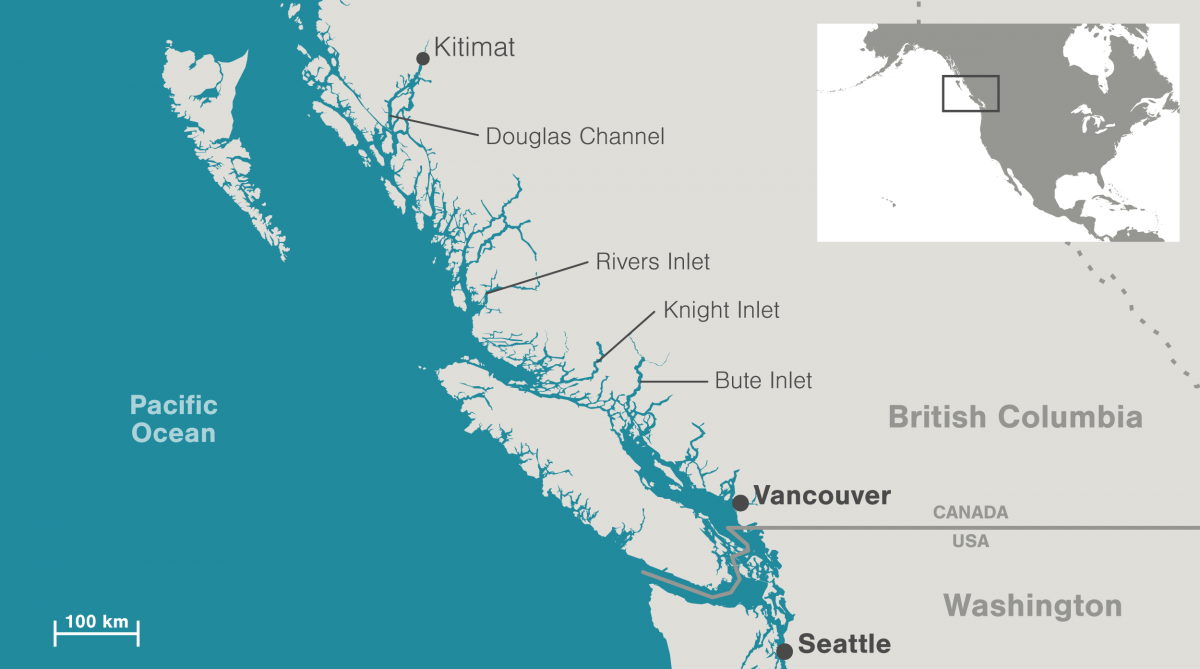 Unfortunately, that accumulated heat is unlikely to go away anytime soon. Though winter storms typically cause water to mix, which brings the heat trapped in deeper water up to the surface, the warm masses in these fjords are lurking too deep for storms to reach, Jackson says. This is bad news for the salmon that swim through the fjords because it means their food supply may shift to smaller, less nutritious zooplankton that thrive in warmer water. “Those are like junk food for salmon,” she says.

Warm waters are a challenge for salmon off the BC coast, confirms William Cheung, a marine ecologist at the University of British Columbia; they can’t tolerate too much heat, he says. Cheung’s recent modeling work shows that in a marine heatwave year, the mass of sockeye salmon off the coast of Alaska and British Columbia is expected to decline by 10 percent.

Jackson says forces other than marine heatwaves are making life difficult for salmon. She has as-yet unpublished data showing that some of these fjords also suffer from having layers of water with basically no oxygen, probably because of spring algae blooms. “Some of it is really alarming,” says Jackson.

Fjords around the world are vulnerable to the effects of climate change given their intimate connections to the ocean, their long fingers inland, and the glaciers at their heads. In Greenland, for example, melting ice has made fjord water much fresher, creating a cap that prevents deep water from being refreshed. In Patagonia, an increase in organic matter flowing down rivers into fjords seems to have lowered the oxygen content in the water. In British Columbia, the Blob added a particular twist to the tale.

In the summer of 2019, researchers noted another “blob” off the west coast. It was actually even warmer than the Blob, though the warm layer was relatively thin and didn’t last nearly as long, says climatologist Nick Bond of the University of Washington.

Bond, who gave the warming phenomenon its nickname, says he suspects we’ll be seeing a lot more marine heatwaves like the Blob in the future. Bond applauds Jackson’s team for keeping tabs on what’s going on at depth because while changes in ocean surface temperatures are easier to spot, he says, “the deeper effects can last longer.”