Across the world, humans have overwhelmed wild populations and brought chaos to natural ecosystems. We may suspect this intuitively, but now researchers have some hard numbers to show just how efficient humans are as predators.

The result of a decade of work, new research shows that the typical marine fishery kills adult fish at 14 times the typical rate of a wild predator. Humans tend to hit fisheries harder—with hands, hooks, and nets—than any other group of wild animals.

Even the better managed fisheries often start with the proposition of harvesting as much as possible. “That’s the general paradigm,” says Chris Darimont, a Hakai Institute-Raincoast Conservation Society scholar at the University of Victoria. “How can we maximize the so called sustainable yield to humanity?”

Drawing on existing data, Darimont compared the predation rates of human versus wild predators. For example, in Alaska’s Kodiak Archipelago, grizzly bears catch six percent of the adult salmon, while humans catch 78 percent, or 13 times more fish. Given the numbers, he says, humanity’s toll on ocean species is alarming and underlies many of the problems observed in the oceans today.

“Everyone assumes we are this dominant predator, but until now we didn’t know how to describe it,” he says. “Those cross-ecosystem comparisons had never been done before. It provides details at a global scale.” (Darimont’s research is supported by a grant from the Tula Foundation, which also funds Hakai Magazine. The magazine is editorially independent of the institute and foundation.) 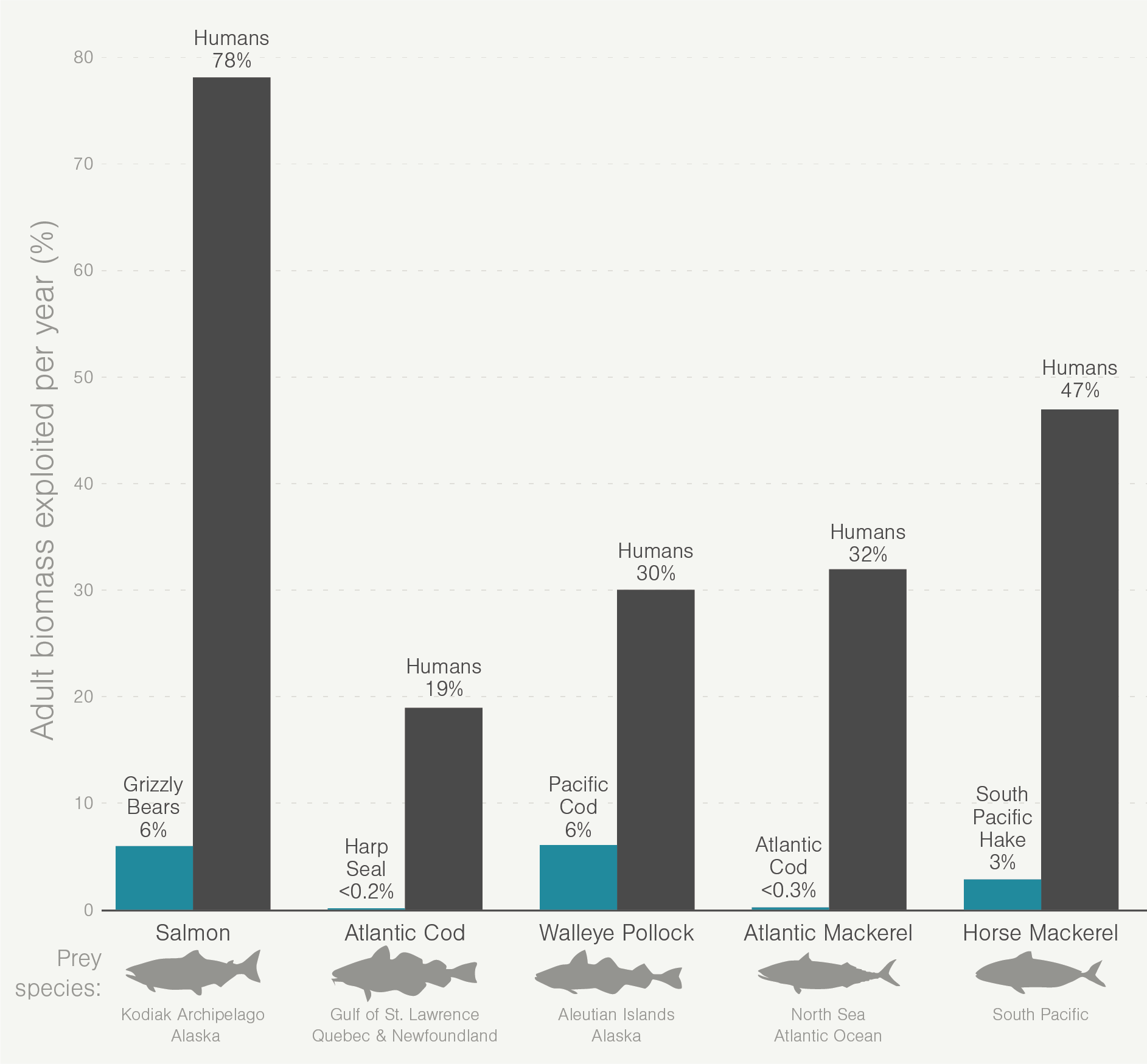 The research compares the number of adult prey killed by humans and other predators. This distinction highlights not only the scale of human predation, but the fundamentally different approach humans take to hunting. Other predators tend to kill mostly old, weak, or young prey, while humans tend to focus on large, healthy adults. Illustration by Mark Garrison

The research shows that human predation has hit the Atlantic Ocean particularly hard—Atlantic fisheries take 2.9 times more fish than those in the Pacific—most likely because there’s a higher density of people living along the Atlantic coast, and a longer history of fishing.

Compared to fish, terrestrial species have a slightly easier time with human predation. Yet humans still typically kill adult forms of mesocarnivores (omnivores that mostly eat meat) and large carnivores at rates 4.3 and 9.2 times higher than wild predators do. Human hunters also kill large carnivores 3.6 times more often than they kill herbivores, for reasons such as competition for the same prey and for sport or trophy hunting.

Darimont says he expects the findings to be “provocative and invite fierce criticism,” but that’s not the reaction from Nicholas Dulvy, the Canada Research Chair in Marine Biodiversity and Conservation. While issues such as climate change have dominated the biodiversity agenda over the past decade, this new research reframes the long-standing threat from human fishers and hunters in a thought-provoking way, he says.

“While the broad brush findings aren’t new to scientists, the details are,” Dulvy says. “The solution to over hunting is clearly within our grasp, and the scale of mortality measured by this study shows that we need to spread these solutions more widely.”

The scientists also found that it’s not just over hunting that separates humans from other predators. Humans tend to target the largest prey, while most wild predators target the slower and less dangerous newborns and juveniles. In the oceans, adult prey are saved by the physiological limitations of wild hunters. Predatory fish and seabirds literally cannot get their mouths around prey that grow too big—a process called gape limitation. “That’s one thing that has limited the exploitation rate of adults in the oceans for millions of years,” Darimont says. “Then along come technologically advanced humans that are not constrained by that limitation.”

In an accompanying article, marine researcher Boris Worm warns that killing the biggest adults “has implications for the sustainability of exploitation and even the course of evolution.” Targeting the “largest, healthiest, and fittest” creatures is risky business, he says, because it alters the gene pool and makes it difficult for heavily fished stocks to recover.

One solution is to look at existing sustainable harvest methods, such as the traditional spawn-on-kelp herring fishery practiced by the Heiltsuk First Nation on British Columbia’s central coast. While the industrial herring-roe fishery kills adult fish to obtain their eggs for global markets, the Heiltsuk take the eggs only and allow the adults to return another year to spawn. One model targets the reproductive adults and draws down that capital; the other balances food, livelihoods, and economic opportunities while maintaining reproductive capital, Darimont says.

Developing and enforcing sustainable fisheries “is not a biological problem,” says Darimont. “It’s about getting a grasp [on] managing humans.”