More than 100 sick seals have recently stranded on the coast of the northeastern United States, including this harbor seal pup found near Old Orchard Beach in Maine. Photo by Marine Mammals of Maine

Since July 1, more than 460 dead seals have washed up on beaches and islands in Maine, New Hampshire, and northern Massachusetts. Another 137 coughing, sneezing, and sick seals have stranded themselves, overwhelming marine animal rescuers. In an announcement last week, the National Oceanic and Atmospheric Administration (NOAA) declared the mass die-off an unusual mortality event (UME)—adding to the three other UMEs currently affecting right, humpback, and minke whales in the same waters.

“It’s heartbreaking to watch,” says Lynda Doughty, executive director of Marine Mammals of Maine, the nonprofit organization that has been leading the response and rescue effort. “These animals are in tough shape.”

Over the past three weeks, the organization has handled more than 300 animals—primarily harbor seals—from pups to adults. Doughty says her organization is still getting a steady flow of reports of stranded animals.

Until recently, most of the affected seals were found south of Portland, Maine. But Doughty says the range of observed strandings expanded northward to the state’s mid-coast beginning in late August.

So far, scientists are still unclear about what is causing the deaths. Preliminary results from an investigation by NOAA Fisheries show that the seals are succumbing to two diseases: avian influenza and phocine distemper virus (PDV), with some animals testing positive for both infections. 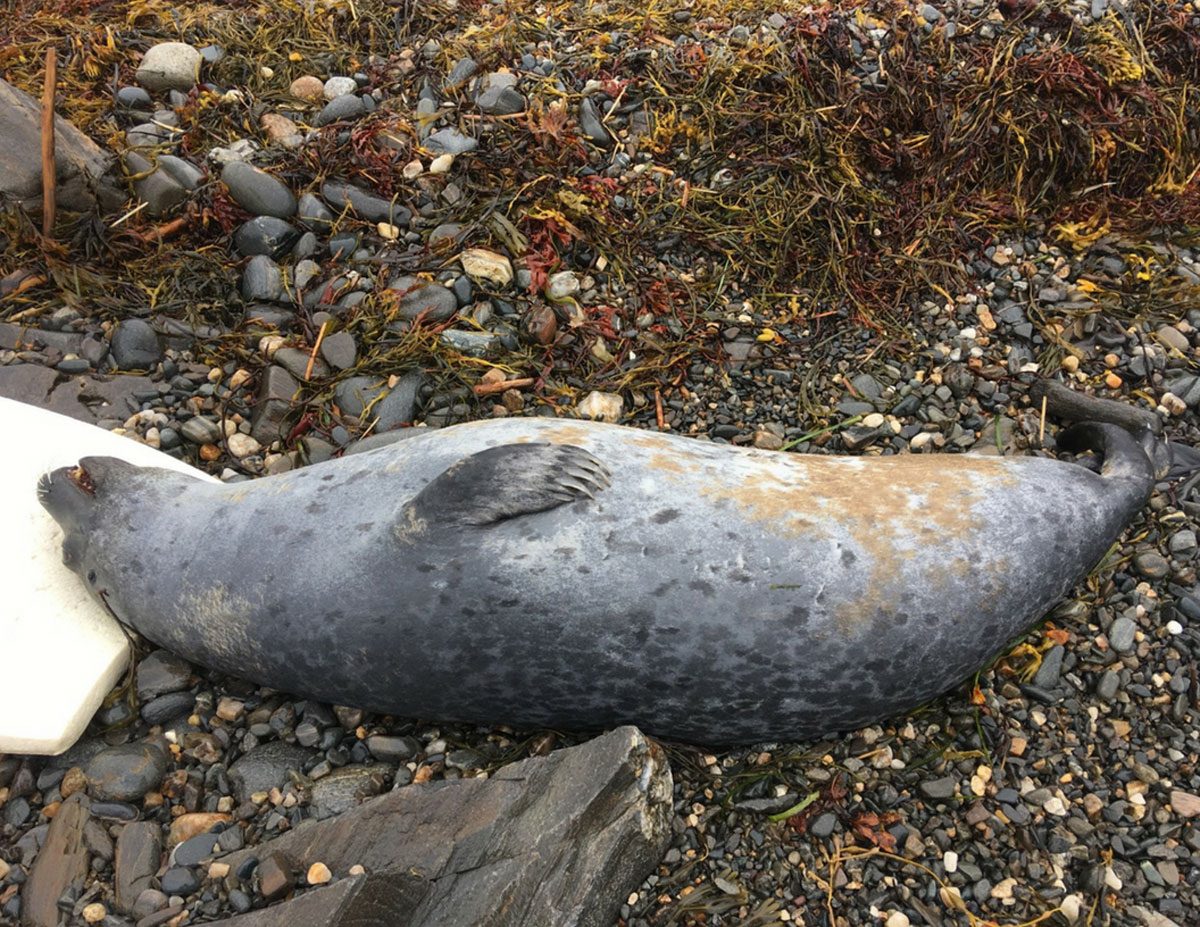 This dead seal, found washed up near Ogunquit, Maine, is one of the hundreds of seals to have died over the past two months. The die-off was recently declared an unusual mortality event by the government. Photo by Marine Mammals of Maine

This isn’t the first time seals in the region have suffered a mass die-off. In 2006, 1,500 seals from Maine to Virginia died as the result of a virus. Research on that event by Andrea Bogomolni, a pathobiologist* at the Woods Hole Oceanographic Institution, showed that the presence of contaminants, including polychlorinated biphenyls (PCBs) and algal toxins, could have contributed to the deaths by weakening the seals’ immune systems and increasing the replication rate of the virus.

Researchers think those toxins and toxicants may be a contributor to the current deaths, however some wonder if another factor is also at play: climate change.

The Gulf of Maine is warming faster than 99 percent of the global ocean, and this year the temperature is unprecedented. On August 30, the Gulf of Maine Research Institute (GMRI) declared that since July 20 the region has been experiencing a marine heatwave, a surge in water temperatures that coincides with the spike in strandings. According to the GMRI, August 8 was the second warmest day ever in the Gulf of Maine, with the sea surface temperature reaching 20.5 °C—3.2 degrees above the historic mean.

Globally, marine heatwaves are now occurring 54 percent more often than they did in the early 20th century. Previous marine heatwaves, such as the Blob, which plagued the northeast Pacific from 2013 to 2015, have been linked to algal blooms, species shifts, mass strandings, and mass deaths of marine creatures. 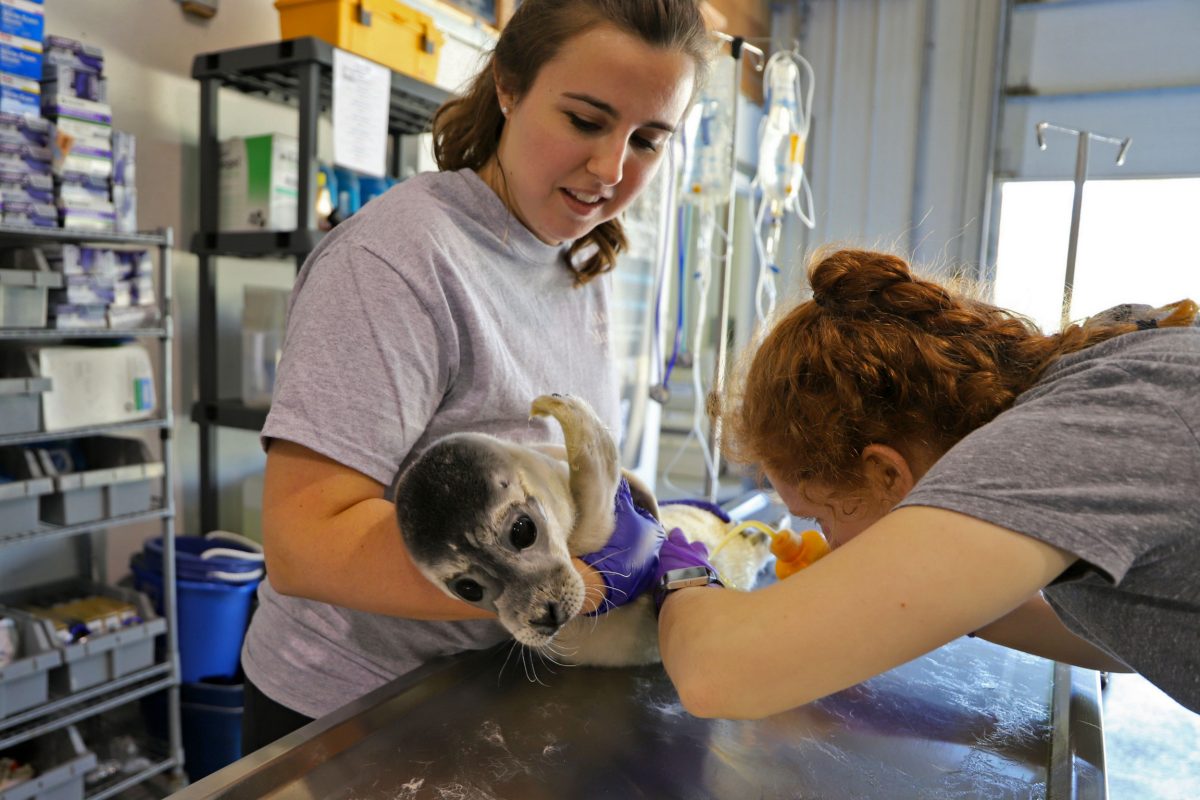 Researchers studying the recent seal die-off put varying degrees of credence in the idea that the deaths are associated with the heatwave, or with ocean warming more generally. Teri Rowles, a marine mammal health and stranding program coordinator for NOAA Fisheries, says that she and her colleagues look for underlying causes, but that “it’s too soon to say” what these might be.

William Sydeman, president and senior scientist at the nonprofit Farallon Institute, in California, was more explicit. With the scale of the temperature anomaly in the Gulf of Maine, “climate is certainly a contributing factor,” he says. “Anybody who says it isn’t is being a little myopic.” The marine heatwave is not expected to subside anytime soon—the GMRI says the Gulf of Maine is especially prone to high water temperatures in the fall.

Whatever the cause of the mass seal strandings, for Doughty and her team of 60 very exhausted volunteers, for now it’s just about saving as many seals as they can. “We don’t know how long this will continue,” Doughty says. The previous two events each lasted about six months. Rowles also revealed that there are probably hundreds of unconfirmed cases in addition to those reported.

Bogomolni worries that once the rate of strandings subsides, everyone will just move on, missing the broader message the seals are sending us. “Harbor seals are known to be sentinels of ocean and human health,” she says. “If something is happening in the ocean environment like this, we should really start paying attention.”

*Correction: Andrea Bogomolni is a pathobiologist with a doctorate from the department of pathobiology and veterinary science at the University of Connecticut. She is not a veterinary pathologist as was originally written.