Until recently, scientists knew relatively little about the lives of birds on the open North Atlantic. But a group of researchers has identified a habitat in the ocean teeming with great shearwaters and other seabirds. Photo by Mark Schuurman/Buiten-beeld/Minden Pictures

Ewan Wakefield had been sailing across the North Atlantic for days when the ocean suddenly greened. A phytoplankton bloom had emerged at the edge of an oceanic cold front roughly 1,000 kilometers south of Greenland, attracting precisely what Wakefield was hoping to find. Dozens of seabirds—great shearwaters, fulmars, and others—appeared, swinging in high arcs near the vessel, bombing the sea surface, and “feeding like crazy,” he says. “It is what we call a hotspot.”

Seabirds comprise one of the most threatened groups of vertebrates. Almost half of all seabirds are in decline. Until recently, scientists knew relatively little about the lives of the birds that dwell on the open North Atlantic. These species spend most of their existence beyond the continental shelves, where life is diffuse and at-sea surveys are costly and dangerous. Not knowing where they live or feed has made protecting the birds nearly impossible. But a group of about 80 scientists, including Wakefield, a biologist at the University of Glasgow in Scotland, has been scouring the North Atlantic to find out more. In the process, they’ve identified an ocean habitat teeming with birds.

In an area spanning nearly 600,000 square kilometers—reaching from the Grand Banks of Newfoundland and Labrador to the Mid-Atlantic Ridge, and from the Azores to the Labrador Basin off Greenland—scientists have found the highest concentration of seabirds ever documented on the open ocean. According to the researchers, an estimated 2.9 to five million seabirds visit the area yearly.

“It is a surprise,” says Wakefield, who surveyed the area in 2017. “The North Atlantic is bounded by some of the most developed countries in the world. And we weren’t doing that research in our backyard.” 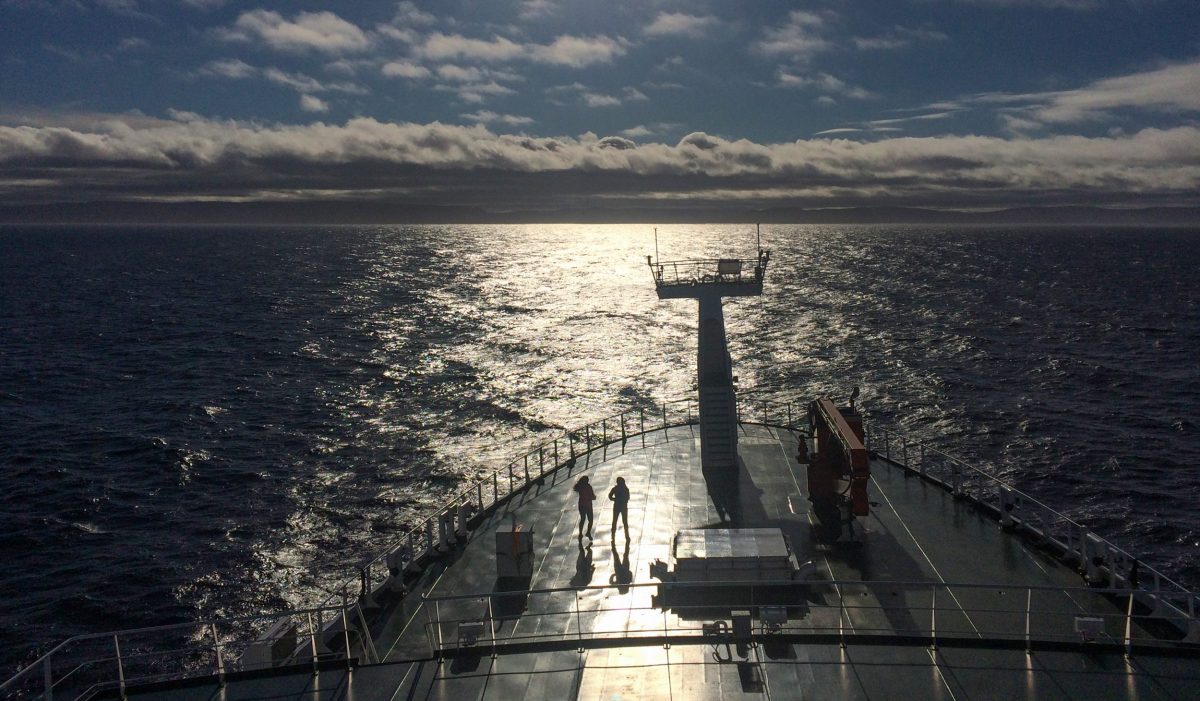 In 2017, Ewan Wakefield, a biologist at the University of Glasgow in Scotland, led a team of researchers aboard the RSS Discovery on a survey of seabirds in the open North Atlantic. Photo by Simon J. Pinder

The discovery, announced in a series of papers published this year, has already prompted a multinational agreement declaring that “this vitally important area for seabirds” needs to be protected.

“I don’t think anyone really thought it would be this big or this many birds consistently using the site,” says Tammy Davies, a conservation scientist and marine science coordinator at the conservation nonprofit BirdLife International, who led the research that identified the area.

Davies and her colleagues at BirdLife International first became aware of the outsized importance of this stretch of the North Atlantic in 2016, when they began mapping data from previous studies that had tracked 1,500 birds from 56 breeding colonies. The area jumped out. At least 21 species were using it, in many cases for hunting and foraging in the months after the energy-intensive mating seasons. Some, such as the great shearwater, were in molt, a vulnerable period when birds shed and regrow feathers. Wakefield says the birds are likely drawn to the area’s oceanic fronts—where the Gulf Stream abuts cold northern waters—which are rich with phytoplankton, small fish, and crustaceans.

“There’s always some hesitancy when extrapolating beyond a few tracked individuals,” says Autumn-Lynn Harrison, an ecologist at the Smithsonian Migratory Bird Center who was not involved in the research. “But there’s no doubt that the absolute number of species that use this place is real. … This place is very important.”

The agreement to establish this area as the North Atlantic Current and Evlanov Seamount Marine Protected Area (NACES MPA) was made by the Oslo-Paris Convention on the protection of the North-East Atlantic (OSPAR), an international body representing 15 countries and the European Union. OSPAR was the organization that established the first network of marine reserves on the high seas in 2010, protecting areas beyond the reach of national jurisdictions. The NACES MPA is the convention’s 11th high-seas reserve and its largest. Yet OSPAR’s declaration only marks that the area should be protected—exactly what shape that protection will take has yet to be decided.

“It’s a starting point,” says Erich Hoyt, a research fellow with the international NGO Whale and Dolphin Conservation, who has written extensively on marine protected areas. “Every protected area starts out on paper, and it’s what you make of it that becomes something.”

OSPAR’s high-seas reserves offer some protection, but because there is at present no global consensus on how to regulate the open ocean, OSPAR’s powers are extremely limited. It does not have sole jurisdiction in its protected areas, and it cannot ban longline fishing or seafloor mining, which are managed by separate organizations.

“There are lots of opportunities for ensuring [the NACES MPA] doesn’t become a paper park, though,” says Davies. OSPAR’s members have committed to monitoring human activities in the area and addressing new threats as they arise. Carrying this out falls to the individual governments that make up OSPAR.

When Wakefield zigzagged across the region four years ago, he noticed a small number of cargo ships and longliners. “We also saw fishing gear—ghost gear—floating around out there, which would still be catching birds,” he says, but given that it’s so far from shore, the NACES area sees relatively few impacts.

Still, as global fish stocks shrink, pressure to develop fisheries in international waters is expected to increase. Threats from deep-sea mining, fossil fuel extraction, and climate change aren’t going away either. So, while the NACES MPA is unblemished compared to many parts of the ocean, the challenge will be to keep it that way.