In a court decision reached late last year, Indigenous communities from the Wild Coast of South Africa’s Eastern Cape have attained a landmark legal victory against energy and petroleum giant Shell. To win their case, lawyers representing the Umgungundlovu, Dwesa-Cwebe, and Port Saint Johns Indigenous communities, among others, argued that because Shell failed to consult meaningfully with local communities, the company’s efforts to explore shale gas off the country’s eastern coast ignored a crucial aspect of local custom. The victory has been hailed as a major breakthrough in the effort to stem the tide of climate change. But it is also a potent example of how Wild Coast communities are using the courts to fight for the right to determine what happens in their territory and strengthening their hand in a country heavily marred by colonialism.

The application that kicked off the lawsuit was brought to South Africa’s High Court by a collection of NGOs, artisanal fishers, and community representatives after the exploration ship Amazon Warrior arrived in late November 2021 to conduct controversial seismic surveys that had been green-lighted by the South African government in 2013. The ship was preparing to study the seafloor using seismic airguns, devices that generate cannon blast–like pulses of compressed air. The plan was heavily criticized by environmental groups and marine activists. The Academy of Science of South Africa called the technology severely outdated and said the surveys are a “real harm to marine life.”

The vessel’s arrival sparked nationwide protests and boycotts of Shell filling stations, but the company defended their survey approach. They received vociferous support from South Africa’s minister of mineral resources and energy, Gwede Mantashe, a widely unpopular figure among Wild Coast communities. (When reached for comment, neither Shell nor Minister Mantashe’s office provided a response.)

According to educator and community leader Sinegugu Zukulu, who filed the lawsuit on behalf of the NGO Sustaining the Wild Coast, one of the core tenets of their dispute was that Shell failed to give local communities an opportunity to weigh in. “It is not only about giving consent,” Zukulu says. “It is about our right to say no to Shell directly and to be able to give our reasons.”

Another tipping point for the court’s decision was the significant cultural connection between Wild Coast Indigenous communities and the sea.

The Wild Coast falls within the Maputaland-Pondoland-Albany biodiversity hotspot, and its pristine waters provide habitat for an exceptional array of endemic and endangered marine species, including South Africa’s national fish the galjoen, or black bream, along with red steenbras, black musselcracker, and abalone. Every winter, the region plays host to a mass migration of sardines that is estimated to rival, or even exceed, East African terrestrial migrations by biomass.

South Africa’s Eastern Cape is one of the country’s poorest provinces, but because of this maritime abundance, Wild Coast communities’ hunger levels are also among the country’s lowest. “We survive because of this ocean, through fishing and catching crayfish,” says Tata Mashona Wetu, a village elder and the second applicant in the case. “If the exploration continues,” he says, “our survival will be destroyed.”

Beyond sustenance, water plays a central role in the system of knowledge and cultural practices of the amaXhosa of the Eastern Cape, says cultural anthropologist Penny Bernard, who studies the link between water and divinity in southern African Indigenous cultures at Rhodes University in South Africa.

According to Bernard, many amagqirha, or traditional healers, derive their divining abilities from spirits or ancestors connected to the underwater world. In this worldview, all bodies of water are conduits between the living and ancestral world, with the greatest water body of them all—the ocean—considered the most sacred. The ocean is known, according to Zukulu, as “God’s river.”

In its decision to back Wild Coast Indigenous communities’ opposition to Shell’s exploration efforts, the court supported the Indigenous worldview, writing that “in terms of the [South African] Constitution, those practices and beliefs must be respected, and where conduct offends those, and impacts negatively on the environment, the court has a duty to step in.” 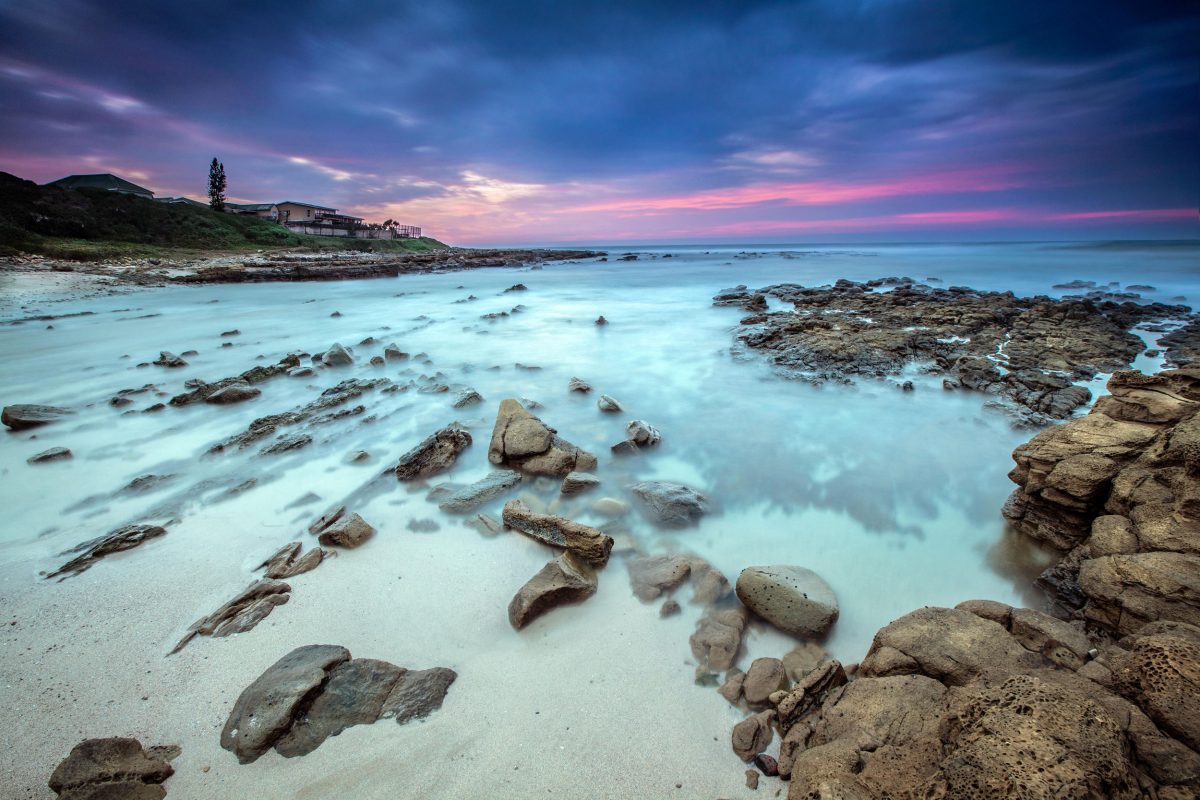 Shell is not the first multinational corporation to covet the Wild Coast region’s natural resources—nor is it the first to come up against a similar legal argument.

Indigenous communities in South Africa suffered mass dispossessions of their customary land under colonialism and apartheid rule. Three decades since the advent of democracy, land ownership and restitution remain highly contentious. Indigenous communities, like those in the Wild Coast, often have to take it upon themselves to enforce their constitutionally protected rights.

In 2005, Australian mining group MRC and its local subsidiaries announced plans for a beach mine in the northern section of the Wild Coast, again with overwhelming support from Minister Mantashe. After a protracted, violent, and occasionally deadly struggle, the High Court eventually ruled in 2018 that the minister would have to obtain “full and formal consent” for the mine from the local Amadiba community, setting a clear precedent by recognizing communities’ customary rights to their land.

“Since that judgement,” says Johan Lorenzen, an associate at Richard Spoor Attorneys, which has represented Wild Coast communities since 2006, “we have already seen a modest shift towards more meaningful engagement with similarly affected communities—even though it’s still not enough.”

In its 2018 ruling on the MRC mine case, the High Court referenced an earlier verdict made by South Africa’s Constitutional Court. In that earlier case, between the Richtersveld Indigenous community and the mining company Alexkor Ltd., the court highlighted the fundamental link between African people and their land—“their most treasured possession.”

In a separate case, also in 2018, the Constitutional Court, deciding on a case between the Lesetlheng community in South Africa’s North West province and Itereleng Bakgatla Mineral Resources, held that the community’s customary ownership is “ownership in its own right, and not merely akin to ownership.” The decision confirmed that Indigenous communities must provide consent for any proposed mining activity that would affect their land rights.

Lorenzen adds that this latest ruling helps to clarify what exactly meaningful, accessible, and inclusive engagement should look like. Considering the constellation of favorable judgements that have been obtained by Indigenous communities, he adds, “Surely the message has to break through at some stage that the disrespect of these communities cannot carry on.”

In response to the High Court’s ruling, Shell terminated the contract of the Amazon Warrior, and the vessel left South African waters in early January. But for Wild Coast communities, the battle to protect their communities and their environment is far from over.

“When you are fighting for a just cause,” says Zukulu, “getting tired is not an option. We are fighting to give life to our Constitution, but also to make life possible on this planet.”