Four people dressed in black drysuits are gliding across the surface of Manitoba’s Churchill River in an inflatable boat, quietly tailing a small pod of beluga whales. As they make their final approach, their stiff silhouettes are a marked contrast to the white whales playfully socializing in the river.

Like a modern-day Captain Ahab, “Captain” Jack Orr, sitting at the back of the boat, is on a mission. Over the past 30 years, Orr has captured more than 300 belugas and narwhals. Over the next 10 days, he intends to take 10 more.

With so many decades of experience, Orr has a plan. His team will chase the whales, herding a group into the shallows. A team member will jump into the water, pulling a hoop net over the target whale’s head. With the beluga restrained, Orr and his team will work quickly. One team member will pull out a piece of stainless steel a centimeter wide and drill it into the whale’s back, through the skin, the blubber, and out the other side. Using stainless steel cables and nylon cords, they’ll hook a satellite tag to the whale’s back.

Other members of the crew will collect blood, skin, and blubber, and start taking measurements: length, fluke width. The team will monitor the whale’s heart and breathing rates, and keep their voices low and movements slow, steering clear of the whale’s head.* Within 40 minutes, the whole ordeal will be over. The whale is released, and the crew returns to the hunt. It’s not quite Moby Dick, but it’s a daring maneuver nonetheless.

Orr, a project lead with the Arctic Research Division of Fisheries and Oceans Canada, has been catching belugas this way since the 1980s. But on his first day on the water in Churchill this past summer, everything Orr thought he knew about catching whales was challenged.

All day, his team waited for an opportunity that never came. They tried to herd the whales and push them ashore, but the animals refused. Instead, the whales swam beneath the boat, following it as if it were an oversized beach ball—a behavior that Orr had never seen. “The herders became the herded,” he says.

“They are wild animals, they are unpredictable, and their environment is always changing, so you have to be prepared.” 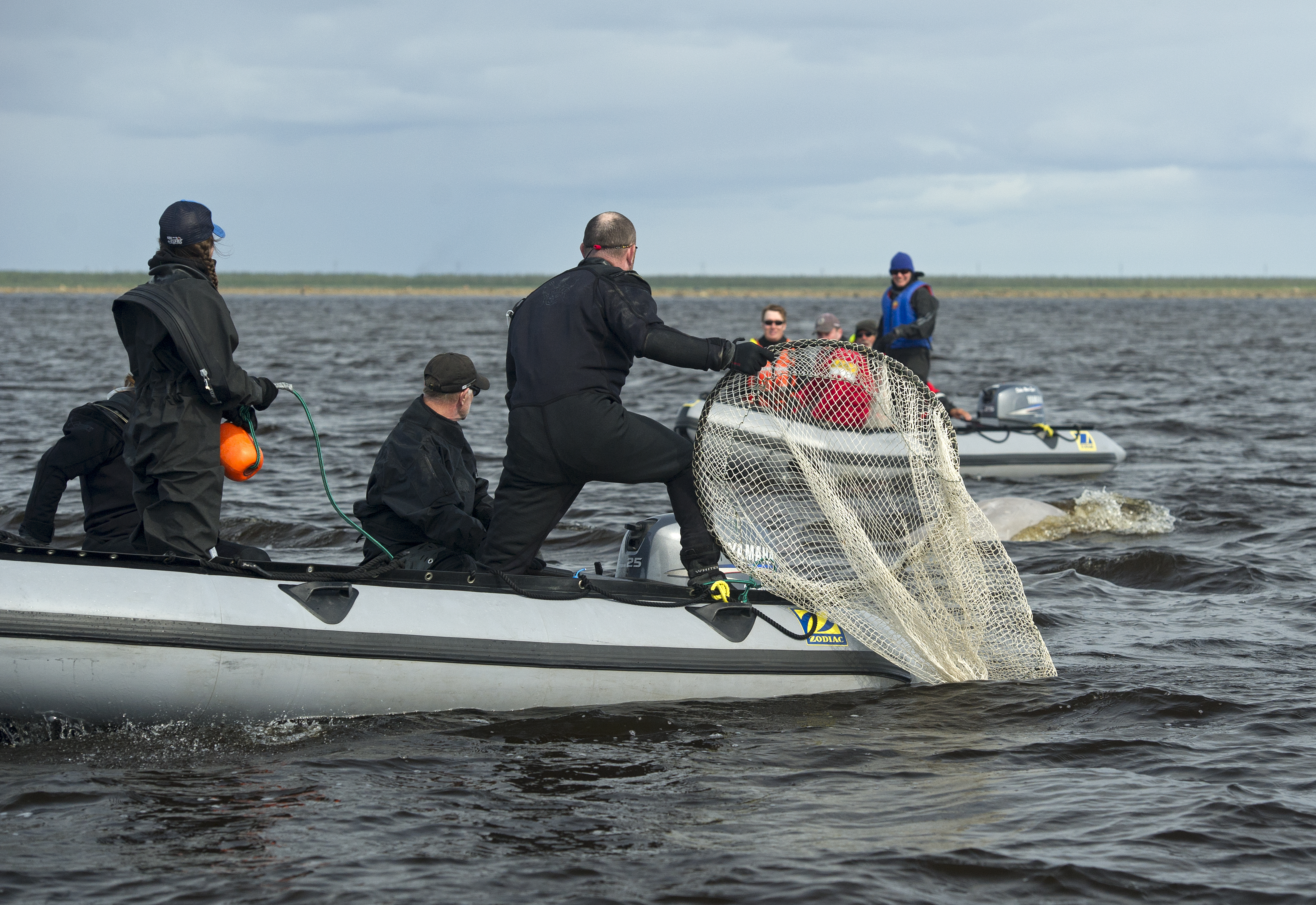 Orr and his team trying, and failing, to catch a whale with a hoop net. Photo by Isabelle Groc

Compared to their counterparts in Alaska or the North Atlantic, Hudson Bay’s belugas are faring reasonably well. They survived industrial whaling (until it came to an end in 1968), and the hunt by aquariums for live whales (which took over until 1992).

Today, the western Hudson Bay beluga population counts about 57,300 animals, and their summer congregations in the bay’s tributaries, including the Seal, Nelson, and Churchill estuaries, are the largest in the world. Yet ongoing climate change means that conditions in the once-safe bay are changing, and this period of brief respite could soon come to an end.

Compared to just a decade ago, the ice-free season now lasts four weeks longer, and the extent of sea ice cover has reduced dramatically. With the receding ice, new predators, such as killer whales, are entering the bay and its tributaries. “Belugas seem to be very adaptable for finding ways to eat,” says Steve Ferguson, a research scientist with Fisheries and Oceans Canada, who was also part of Orr’s tagging expedition. “But I don’t think they can find ways to escape killer whale predation if there is no ice around them to hide in.”

The reduced ice cover may also lead to an extended shipping season in and out of the Port of Churchill, and an increase in industrial development, putting the belugas at risk of noise disturbance and pollution.

In a proactive bid to save the whales, the Manitoba provincial government recently released a plan to protect the belugas’ habitat. “The idea is to put in place protection measures and get the ball rolling while this population is still healthy,” says Kristin Westdal, a marine biologist with the Pew Charitable Trusts’ Oceans North Canada, who worked with the province to develop the plan.

But to protect the belugas’ habitat, the policymakers first need to know which areas are most important to the whales. Hence, Orr and his satellite tags.

Orr and his indefatigable team have been trying again and again to drive the whales into the shallows, and still the belugas won’t be herded.

“Belugas do what they do and that’s why I love them,” he says. “I am not their boss.”

“It is humbling when they get the best of you,” he adds.

After three frustrating days on the water, Orr decides to take a different approach.

“When you change your method it can be pretty intense because it feels like starting over,” he says.

The team cast a long net into the water, using it to surround a group of belugas in deeper water. Within seconds, Orr catches his first whale.

After surrounding the whale with a net, the team finally manage to catch it. Photo by Isabelle Groc

Over the next few days, Orr and his team tag eight more belugas. A trip that began as failure turned into one of the group’s best.

“You have to have a couple of different tools in the marine mammal toolbox,” he says. “You can’t just rely on one method because it worked 10 years ago.”

In the months that followed, Orr used the tags to track the whales until the last tag stopped transmitting in mid-December. While Orr had hoped the tags would last longer, what he did see surprised him: the whales seemed to have delayed their northward winter migration compared to other whales tagged in the past.

“That’s the joy of being able to tag different whales in different locations in different years,” he says. “Each time, your knowledge has increased, and that’s so gratifying.”

From a policy perspective, Orr’s tagging is paying off, too. Pew’s Westdal used Orr’s tracking data to help calculate which areas seem most critical to the whales. When combined with previous research, the tags show that “belugas are tightly associated with the coastline,” says Westdal, “which is significant when you are looking at protections and understanding how to look after this population.”

The province’s plan is now going out for public consultation. No formal protections currently exist for the western Hudson Bay belugas’ habitat, and the province is looking to change that. Crucially, they’re looking to the federal government for support, and want to see the whale habitat near Churchill included in the country’s existing plan to protect 10 percent of its marine and coastal areas by the end of the decade.

*This sentence was updated for clarity.