A diver explores the artificial reef on the wreck of the Pinar I in Turkey. Photo by imageBROKER/Alamy Stock Photo

A fierce wind drives waves against the boat, and a battering rain strafes its bow. Here on Howe Sound, about 30 kilometers northwest of Vancouver, sailors call the wind a Squamish, a particularly aggressive blast of air that funnels down the fjord and can take mariners by surprise. “Looks like we’re hitting the worst of it,” says Captain Kevin Breckman, owner of Sea Dragon Charters. “That’s winter up here. It makes for exciting boating.”

After a pounding 25-minute journey from Horseshoe Bay, Breckman steers the boat, Topline, behind the southeast corner of Gambier Island and takes shelter in Halkett Bay Marine Provincial Park. Three buoys in the near distance hint at what lies beneath the dark, unyielding sea: the 113-meter destroyer HMCS Annapolis.

Launched in 1963, the Annapolis served in the Royal Canadian Navy and later the Canadian Forces, roaming through North Atlantic, Caribbean, and European waters. Then, on April 4, 2015, the Artificial Reef Society of British Columbia deliberately sank the ship in Halkett Bay. The Annapolis would serve once more, this time as the foundation for an artificial reef—a new habitat to promote marine life in all its diversity.

But is that the truth or just hyperbole? The captain and Topline are battling the weather in an attempt to find out.

Around the world, artificial reefs—habitats constructed from the bones of sunken ships, oil rigs, subway cars, or other structures—have their supporters and detractors.

Opponents have criticized artificial reefs for altering natural marine ecosystems, giving humans easy fishing targets, and for attracting divers to areas where they may damage natural habitats while exploring artificial ones. Critics also highlight the potential for pollution, and note the general lack of hard scientific evidence that artificial reefs promote marine populations.

In British Columbia, artificial reefs have caused strife in the marine community. The sinking of the Annapolis resulted in an unanticipated bill of about CAN $1-million (US $750,000) to federal and provincial taxpayers to remove polychlorinated biphenyls before the sinking, and triggered lawsuits from residents concerned about the potential for pollution in their backyard. 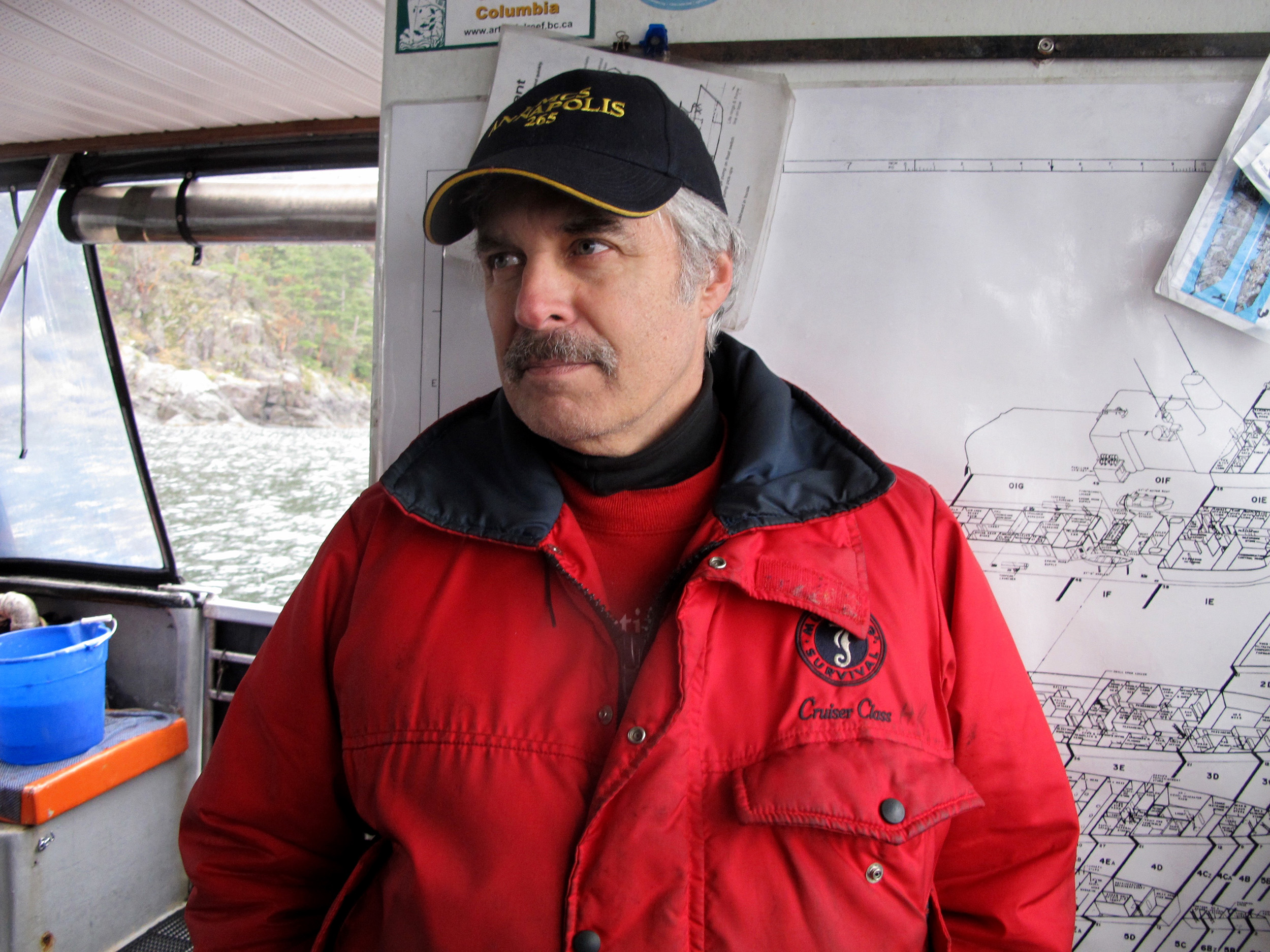 Howard Robins is the president of the Artificial Reef Society of British Columbia, the organization behind the sinking of the HMCS Annapolis. Photo by Larry Pynn

The Artificial Reef Society of British Columbia is well aware of the controversy surrounding artificial reefs. After all, the Annapolis is only the most recent vessel they’ve sunk over the past 25 years. Since 1991, the society has also dropped a coastal freighter, a Boeing 737 airplane, and six other military ships to the seafloor off southern BC.

“We know what we’re talking about, we know what we’re doing,” says society president Howard Robins as he stands at the Topline’s stern, gazing at the incessant whitecaps. “Nobody has done what we have.” Nor, apparently, has anyone done a rigorous analysis on the question of whether artificial reefs, like the Annapolis, do their jobs as advertised.

So the artificial reef society is trying something new to assuage some of their critics. In partnership with the Vancouver Aquarium, the society is embarking on the five-year Annapolis Biodiversity Index Study. Launched in 2015, the project is designed to document marine life on and around the ship.

So far, a total of 14 dives split almost evenly between aquarium and recreational divers armed with cameras has recorded around 80 species of flora and fauna.

As a bonus, the program now hopes to use the Stingray 500—a submarine built by Aquatica Submarines of West Vancouver and capable of carrying three people to the Annapolis lying at the bottom of Halkett Bay. “We have a living research laboratory in our backyard,” Robins says. “Having the submarine puts this project on steroids.” 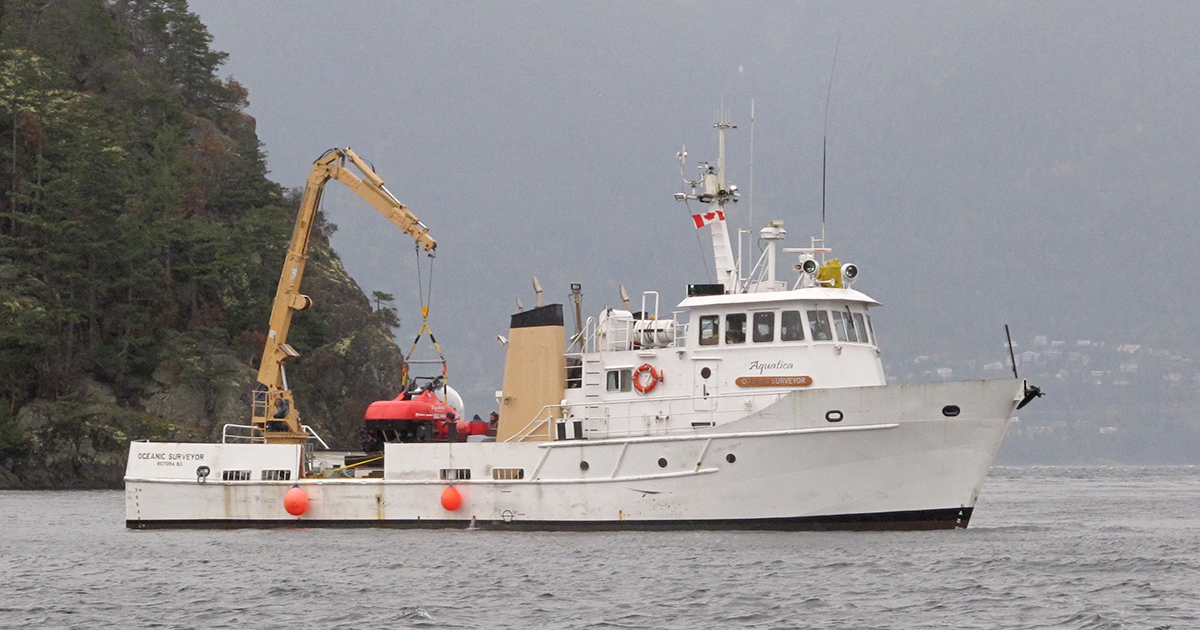 The Stingray 500 submarine sits on the deck of the Ocean Surveyor, waiting for the weather to change. Photo by Larry Pynn

The steel-and-aluminum Annapolis lies hull-down in mud at a maximum depth of 32 meters at low tide, with the top of the stacks just 10.5 meters deep—giving marine life a vast vertical and horizontal range to cling to and hide from predators.

“The Annapolis presents nature with a real diversity of habitat types,” says Jeff Marliave, a veteran marine scientist with the Vancouver Aquarium. “It’s like a sheer cliff with caves and all kinds of interesting physical features.”

Divers have seen benefits, too. Breckman estimates his charter business has increased at least 30 percent since the sinking of the Annapolis, with divers coming from the Pacific Northwest and as far as Europe. “It’s been great for us, fantastic.”

As for the handful of recreational property owners in Halkett Bay who fought the sinking, they were described as NIMBYS but remain concerned about pollution from anti-fouling paint. “None of us will eat the prawns or the crabs or anything that you take out of the ocean there,” says Nick Magendie, who owns property on Halkett Bay.

On this blustery afternoon in late October, the Topline and 27-meter Oceanic Surveyor, with the Stingray 500 on its deck, pace nervously back and forth in the bay, waiting for conditions to improve.

Everyone is anxious to get down to business and prove the Annapolis is a sign of booming and diverse populations—a net benefit to the marine ecosystem.

For now, that work is on hold.

The stormy weather forces the crew of the Stingray 500 to cancel their dive—the last, for now. In the near future, the plan is to expand the sub’s range to BC’s other artificial reefs.

“We’ll be back,” Robins says, as the captain points the Topline toward home.