Nishino-shima on January 14, 2014, shortly after merging with Nii-jima. Photo by Japan Coast Guard

On November 20, 2013, a new Pacific island was born. From a volcanic vent hidden just below the ocean’s surface, hot gas, black smoke, burning ash, and rock shot hundreds of meters into the air. The material piled up to make the Japanese island Nii-jima—literally, “new island.” By the end of December, Nii-jima grew so large that it merged with its nearest neighbor, Nishino-shima. Today, the old Nishino-shima is almost entirely buried under new lava, and the now 2.5-square kilometer island continues to grow.

Once the new, aggregate Nishino-shima cools, the volcanic rock will be a blank slate—but not for long. Life, as always, will find a way. But what way will it find? 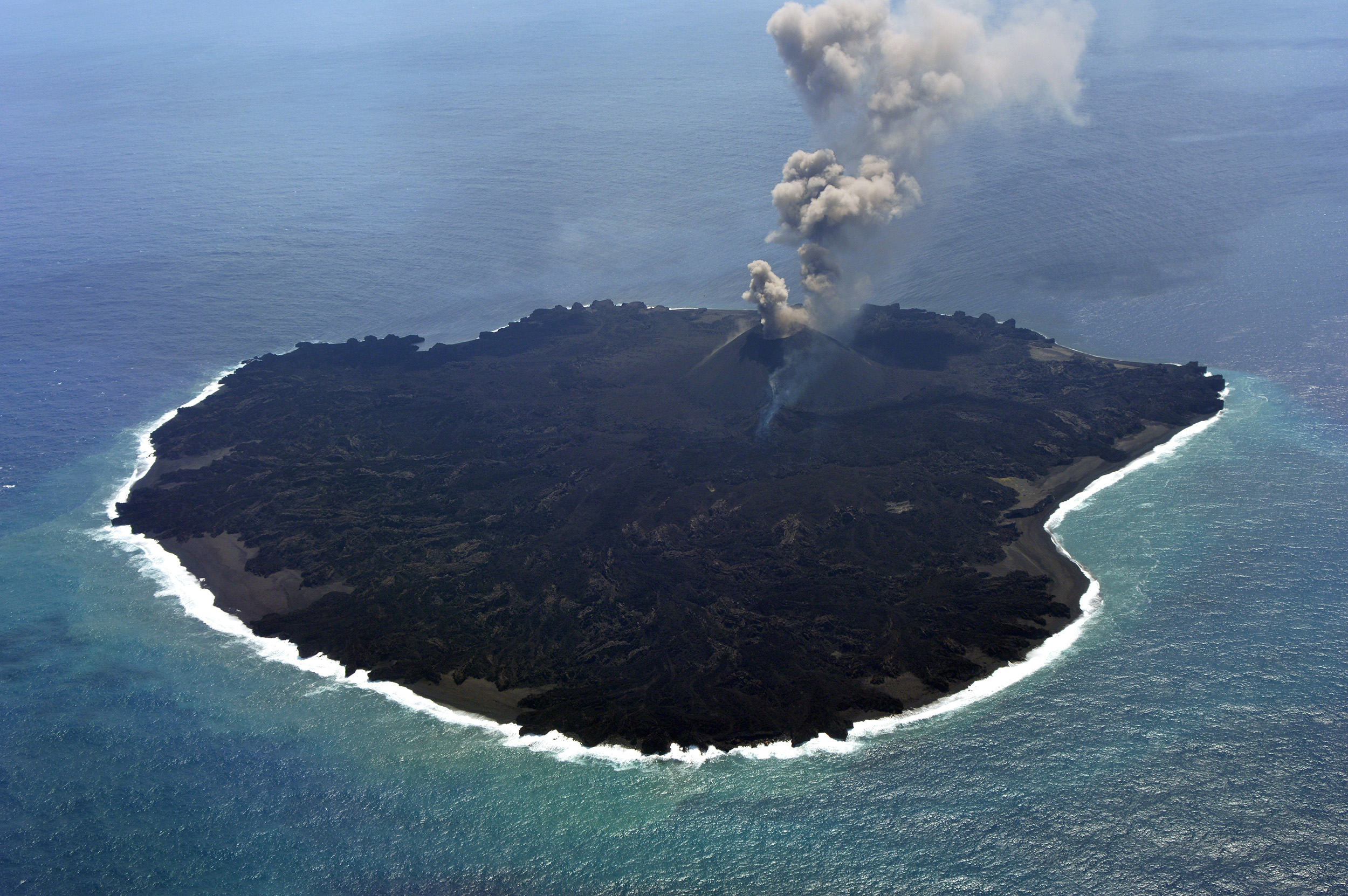 One intensively studied island may shed light on how life will populate the barren Nishino-shima. Surtsey, an island off Iceland, has been surveyed every year since it emerged from the depths in 1963. Despite obvious geographic and climatic differences, Nishino-shima’s colonization is likely to follow Surtsey’s, says Roger del Moral, a retired ecologist who previously studied how vegetation recovered on Mount St. Helens in Washington State after a 1980 eruption wiped the area clean. Nishino-shima is “going to be a warmer version of Surtsey,” he says.

Life first arrived on Surtsey in 1965 when searocket, a bushy plant with small purple flowers, sprouted along its black shore. Like other plants that travel by sea, searocket is well suited to colonizing new islands. Its seeds are survivors: they float, they resist salt, and they’re fat with nutrient reserves—a built-in backpack full of food.

“Sea-dispersed species always show up early,” says Borgþór Magnússon, a plant ecologist who’s surveyed Surtsey almost every year since 1987. “The seeds tend to be larger and the seedlings are capable of surviving in difficult conditions.”

For Surtsey’s first two decades, nearly all the plants that grew on the island arrived by sea. Despite their settlement, the soil remained infertile to smaller seeds and no animals settled in beyond the occasional vagrant. That continued until 1985, when a more complex ecosystem was jump-started by a new migrant: seagulls. The birds flew over from mainland Iceland to form a breeding colony, which soon grew to several hundred breeding pairs. And with the gulls’ arrival, life blossomed. 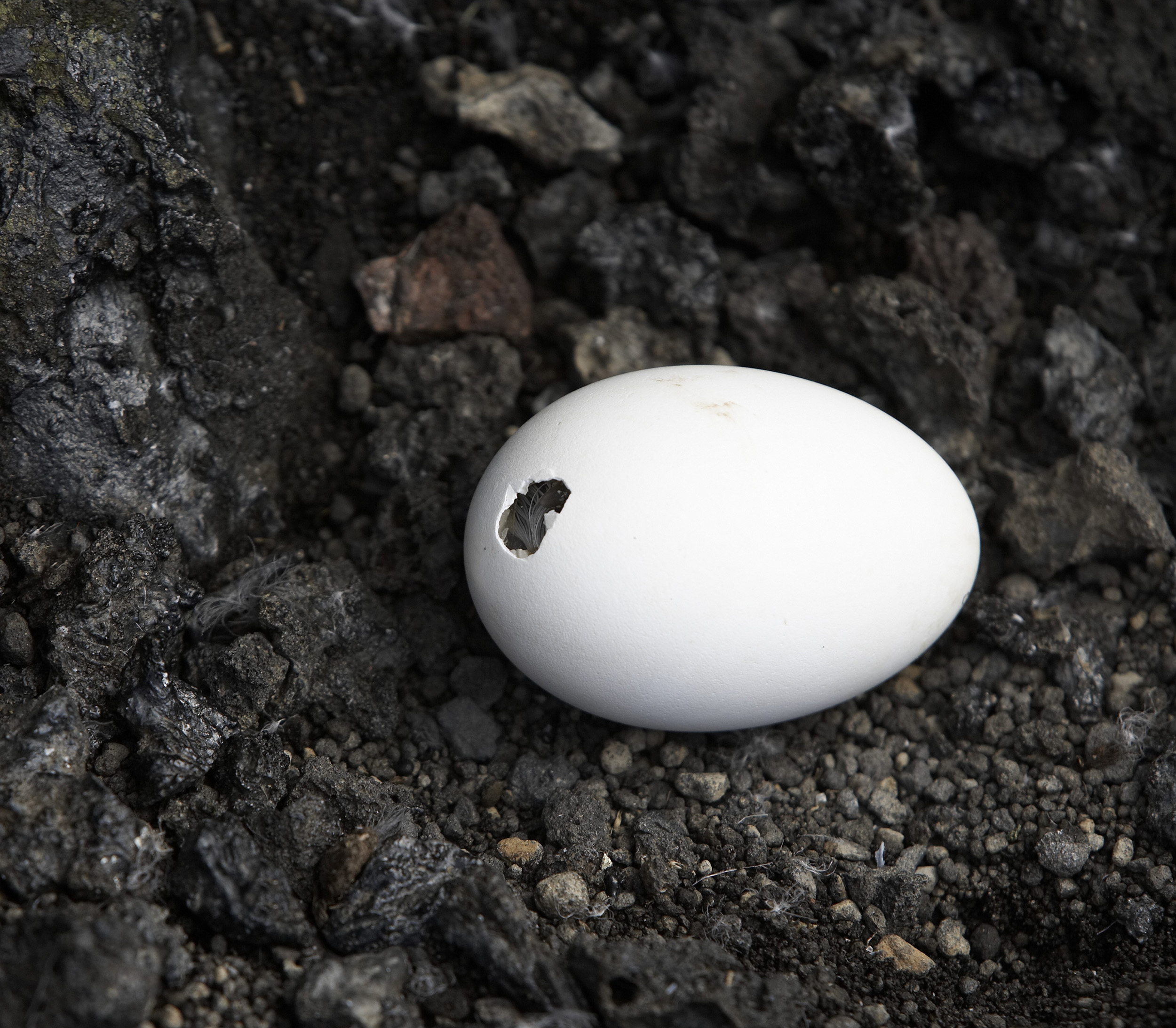 A chick hatches on Surtsey, Iceland. Photo by Arctic-Images/Corbis

Birds poop, vomit, shed feathers, and drop food on the ground. They die and their bodies decompose. But mostly they poop. Over time, the gulls’ noxious leavings accumulated into a thin layer of soil rich in nitrogen, phosphorus, potassium, and minerals.

Those nutrients changed everything. Small seeds were able to sprout and take root amid the gull colony. Insects arrived to eat the plants, and terrestrial birds flew over to eat the insects. By 1996, snow buntings, which require insects to feed their young, started breeding on Surtsey—a sign of complex ecology. 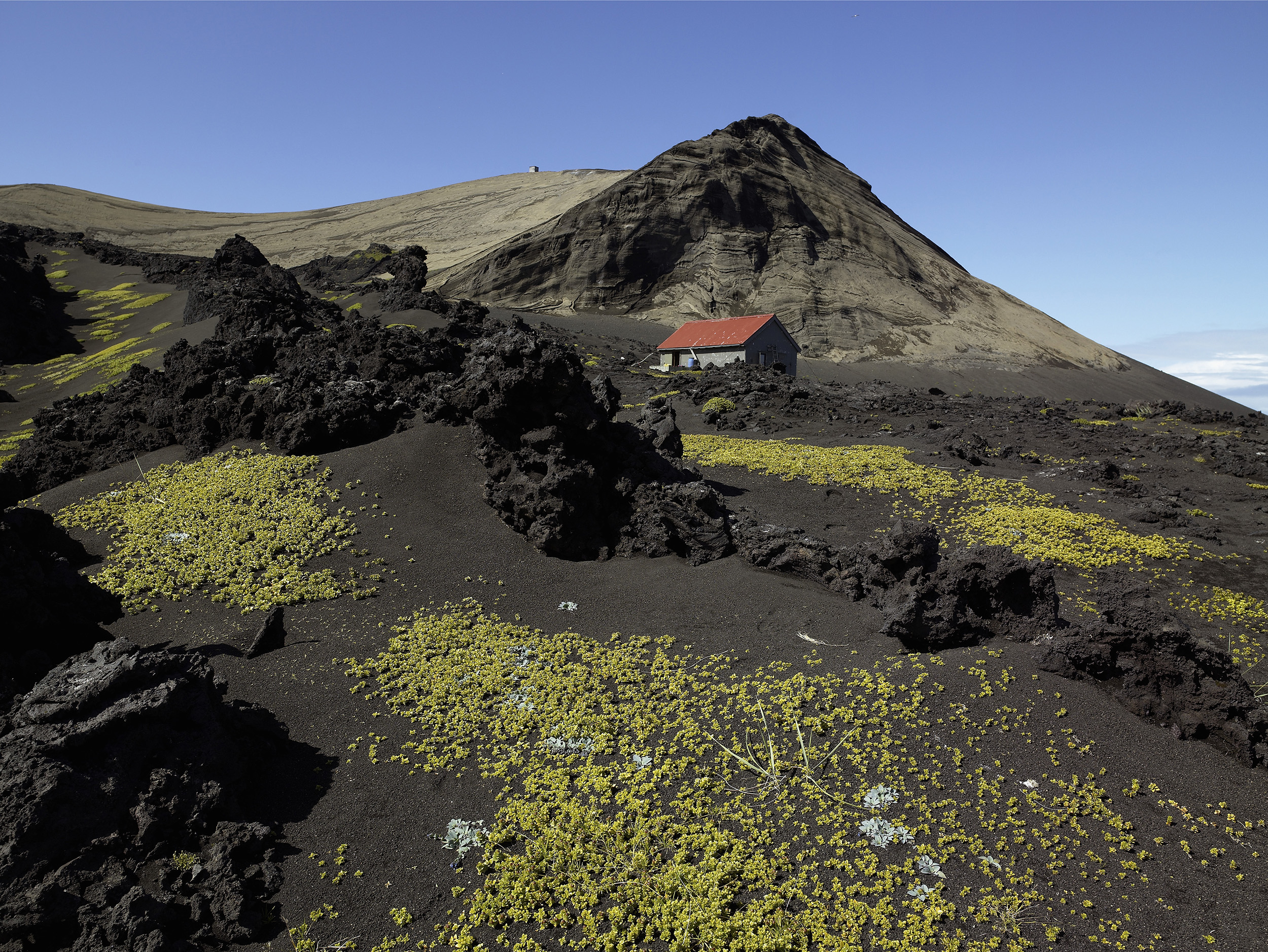 One of the two small research huts constructed by the Surtsey Research Society. Photo by Arctic-Images/Corbis

All this new life—69 species of plants, insects, and breeding birds—began with the seagulls. “Things didn’t really start to happen at Surtsey until we had seabird colonies and nutrient enrichment of the soil,” says Magnússon.

This isn’t the first time that life on Japan’s Nishino-shima has been reset. In 1973, a different volcanic eruption added land to the original Nishino-shima. The few surveys between then and now hint at the new island’s future: that succession will follow a path similar to Surtsey’s, but will unfold more slowly and on a smaller scale.

Step one, by Surtsey’s rules, is the arrival of sea-dispersed plants. Ten years after the 1973 eruption, only one new plant species had arrived at Nishino-shima. The floating seeds of beach morning glory, a salt-tolerant vine, sprung up along the coast, joining three hardy plants that managed to survive the eruption—a meager showing, but it fits the pattern regardless. 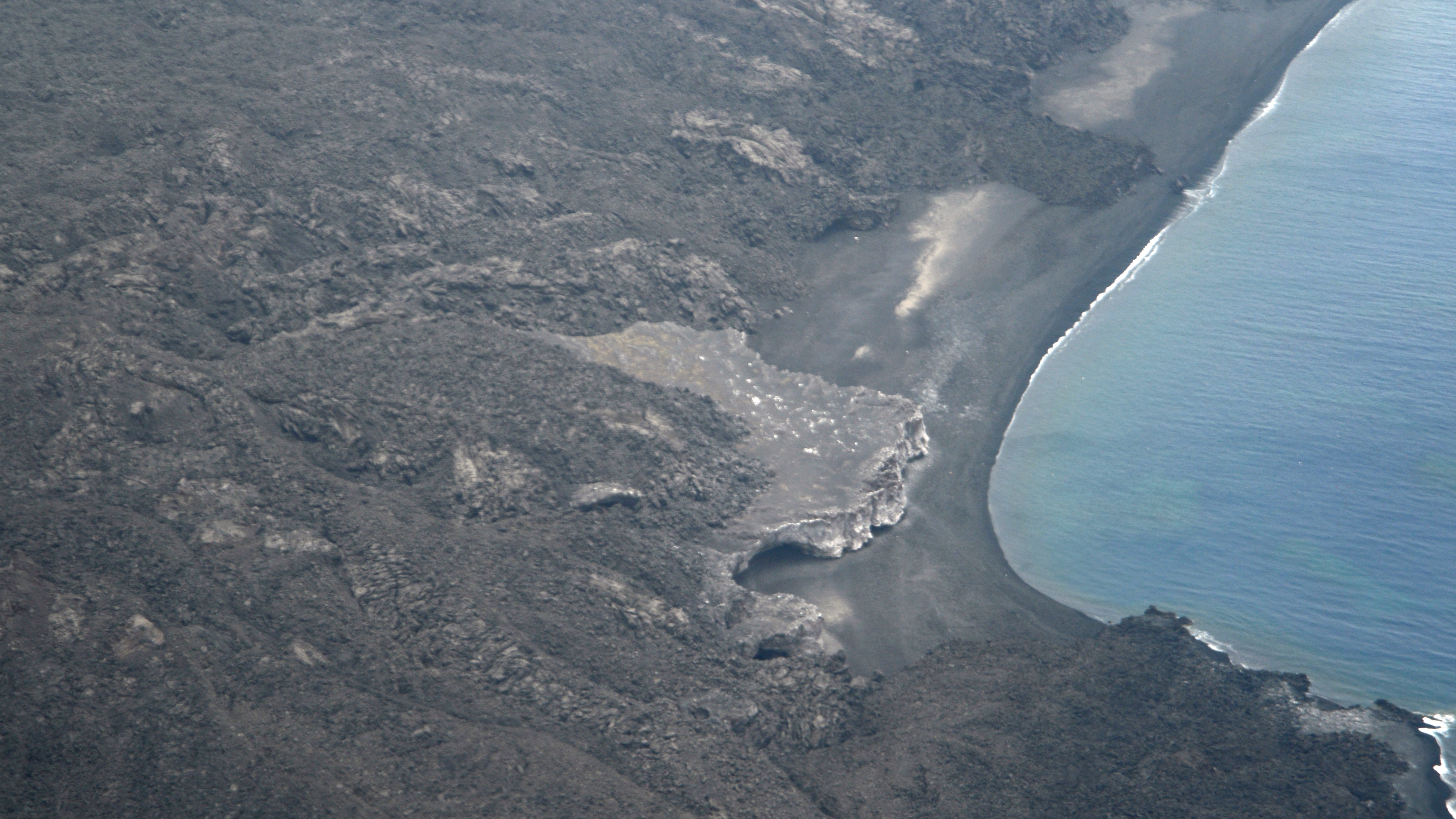 The light gray outcropping is all that remains of the old Nishino-shima. Photo by Japan Coast Guard

When researchers returned to Nishino-shima in 2004, a seabird colony had formed. However, the seabirds (and their poop) didn’t set off a surge in plant diversity as observed on Surtsey. This second survey unveiled just two new plant species (both sea-dispersed) for a whopping total of six plant species. Not so diverse after all.

“What is different from Surtsey is that this island is very remote, and even the closest islands are still very remote,” says Magnússon. Surtsey lies 33 kilometers from Iceland and within 10 kilometers of other islands; Nishino-shima is 1,000 kilo­­­­­meters south of mainland Japan and 130 kilometers from the nearest island.

A thousand kilometers is a long distance for animals to travel. More crucially, it changes which seabirds make it to the island.

Surtsey’s seagulls spend most of their time on land, hopping from coast to coast during the year. Along the way, “they are transferring seeds from the mainland and other islands to Surtsey,” says Magnússon. The terns, petrels, shearwaters, and boobies that nested on old Nishino-shima were true seabirds, coming to land only to breed. While their poop is just as nourishing as Surtsey’s gulls’, they aren’t planting seeds as they go.

Life on the new Nishino-shima, however, may arrive much more quickly than it did last time. Some seeds from the plants that grew on old Nishino-shima likely survived and float just offshore, ready to sprout when they wash aground. The seabirds that bred on the old island will probably return to their territory, says Magnússon, and if nesting habitat on the island is not too disturbed, the birds will try to breed.

Given enough time (and no more eruptions), plant diversity will likely develop even beyond what old Nishino-shima saw—and the researchers look forward to watching this new experiment unfold.

“It will be very interesting to see the rate of colonization around this much more remote island,” says Magnússon. “I find that very exciting.”