It’s a Haida saying she’s never forgotten: “When the tide is low, the table is set.”

Jenny Cross grew up beside the Pacific Ocean in the village of Skidegate on Haida Gwaii, a remote archipelago off British Columbia’s northwestern coast. For Cross, like many Haida people, fishing and foraging for the wild foods that are abundant on the remote islands is a way of life. When the ocean recedes, they dig for razor clams. In the spring, they harvest and dry seaweed, and fish the rivers and streams for salmon. Haida women often gather in groups to pick huckleberries, blueberries, and thimbleberries, their fingers flying. Cross’s mother passed down to her the knowledge of preserving wild foods, including canning salmon. In recent years, she’s returned to her family’s history of digging for butter clams. Today, Cross is sharing many of these traditions with younger generations through her work as an early-childhood educator.*

Despite the suppressing effects of colonization and the legacy of the residential school system, which ripped many First Nations children away from their communities, many Haida people keep their culture alive by fishing and foraging for traditional foods on the islands. According to Cross, traditional food is more than just sustenance for the Haida people. “It’s medicine,” she says.

In the early 1970s, traditional foods even showed up at the hospital in nearby Queen Charlotte, where Cross’s aunt worked as a cook. “Fishermen brought fresh salmon and halibut into the hospitals,” she recalls. But the practice didn’t last.

In the late 1970s, Haida foods disappeared from the menu at the islands’ two hospitals: the Queen Charlotte/Haida Gwaii General Hospital and the Northern Haida Gwaii Hospital and Health Centre in Masset. Today, patients are predominantly served reheated meals or food made from ingredients that’ve been shipped seven hours by ferry from the mainland.

“When our elders come to the hospital, they’re lonely,” Cross says. “To eat food they aren’t accustomed to—grocery store food—adds to the lonely feeling.” 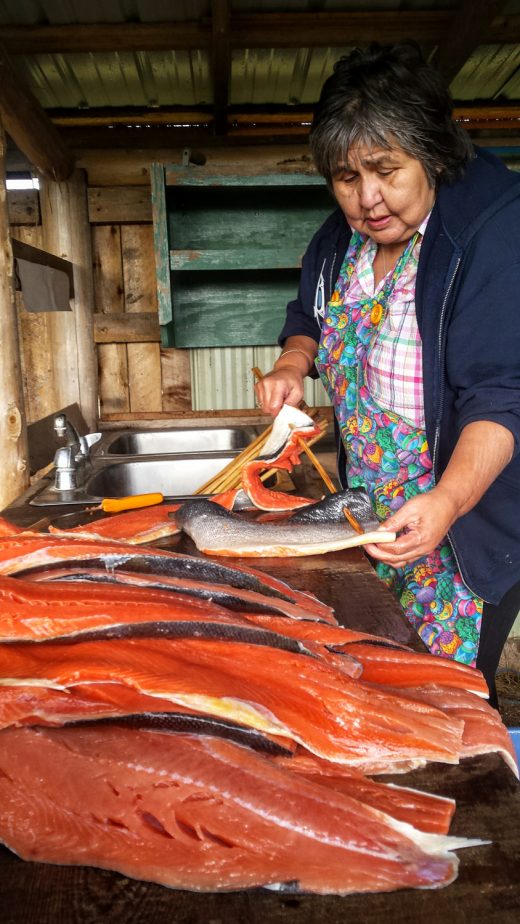 Marina Jones, a Haida elder, is involved with the food gathering and preparation for the new hospital food program. Photo courtesy of Shelly Crack

But the 40-year run of feeding patients frozen meals is about to change. Starting on June 21, the hospitals will take a significant step toward bringing traditional food into the healthcare system. The hospital in Queen Charlotte will soon dedicate one percent of its monthly food budget to purchasing local foods, including berries, vegetables, and venison, directly from foragers and farmers. In addition, Haida Wild, a Haida-owned and operated fish processing plant, will donate fresh, locally harvested salmon and halibut.

Shelly Crack, a registered dietitian with Northern Health in Masset, is one of the organizers behind the new project. “We’re going back to scratch: in-house cooking and traditional foods,” she explains.

But changing the hospital’s food system is no easy task, she says. “We’re trying to change the system on a small-scale … and eventually ramp it up.” The trial is part of a larger project, called Nourish, that’s working to change the food practices and policies at healthcare institutions nationwide.

One of the major concerns, and potential challenges, is ensuring food safety. But Crack and her team have worked closely with an environmental health officer to develop safety plans for locally harvested and foraged foods.

“If someone picks huckleberries, for example, we record who picked them and when,” explains Crack. “We then process the berries in a food-safe kitchen, freeze them, and give them a batch number, which we can track. We can do that with all of the foods, including mushrooms, farmed foods, berries, venison, and fish.”

At the Northern Haida Gwaii Hospital and Health Centre, the goal is to move entirely away from serving reheated meals to cooking from scratch. Once a month, patients and staff will share in a traditional meal of fish, vegetables, and venison.

“We want to show other communities that it’s possible to serve local, sustainable food—and that it can be safe and cost-effective,” Crack says.

As for Cross, she’s confident the project will be well received by hospital patients. “When traditional foods are served, it’s soul food. You say mmm when you eat from the ocean, because it nourishes and feeds your spirit,” she says. “It makes you stronger.”

*Correction: The previous two paragraphs were updated for clarity.