Opposition to the Sipekne’katik First Nation’s lobster fishery did not stop Potlotek First Nation fishers from opening their own moderate livelihood fishery off southern Cape Breton, at the opposite end of Nova Scotia, on October 1. Several other Mi’kmaq nations across the Maritimes are preparing to follow suit. Photo by Andrew Vaughan/The Canadian Press

Early Monday morning, flames engulfed a fishing boat belonging to a Mi’kmaw fisherman from the Sipekne’katik First Nation at a southwestern Nova Scotia wharf. The suspicious fire is the latest in a weeks-long saga of conflict between Indigenous lobster fishers and non-Indigenous commercial fishers.

Beginning on September 17, the day the Sipekne’katik nation launched its self-regulated lobster fishery, a multi-day standoff between Indigenous and non-Indigenous fishers led to violence on wharves in Saulnierville and Weymouth, Nova Scotia. The RCMP charged two men with assault. On the water, commercial fishers fired flares at Sipekne’katik fishers, blockaded their vessels, and removed hundreds of traps from St. Marys Bay, Nova Scotia, home to some of the most lucrative lobster fishing in Atlantic Canada. There is worry the unrest will flare up again when commercial lobster season opens, and Indigenous and non-Indigenous fishers are on the water at the same time.

Around Nova Scotia, the opening of the lobster fishing season is staggered throughout the year. But in this part of the province, St. Marys Bay, which is part of Lobster Fishing Area 34, commercial lobster season, as designated by Fisheries and Oceans Canada (DFO), runs from November 30 to May 31.

The commercial fishers claim the protests are to protect the lobster population, insisting that catching lobsters out of season threatens this valuable resource. 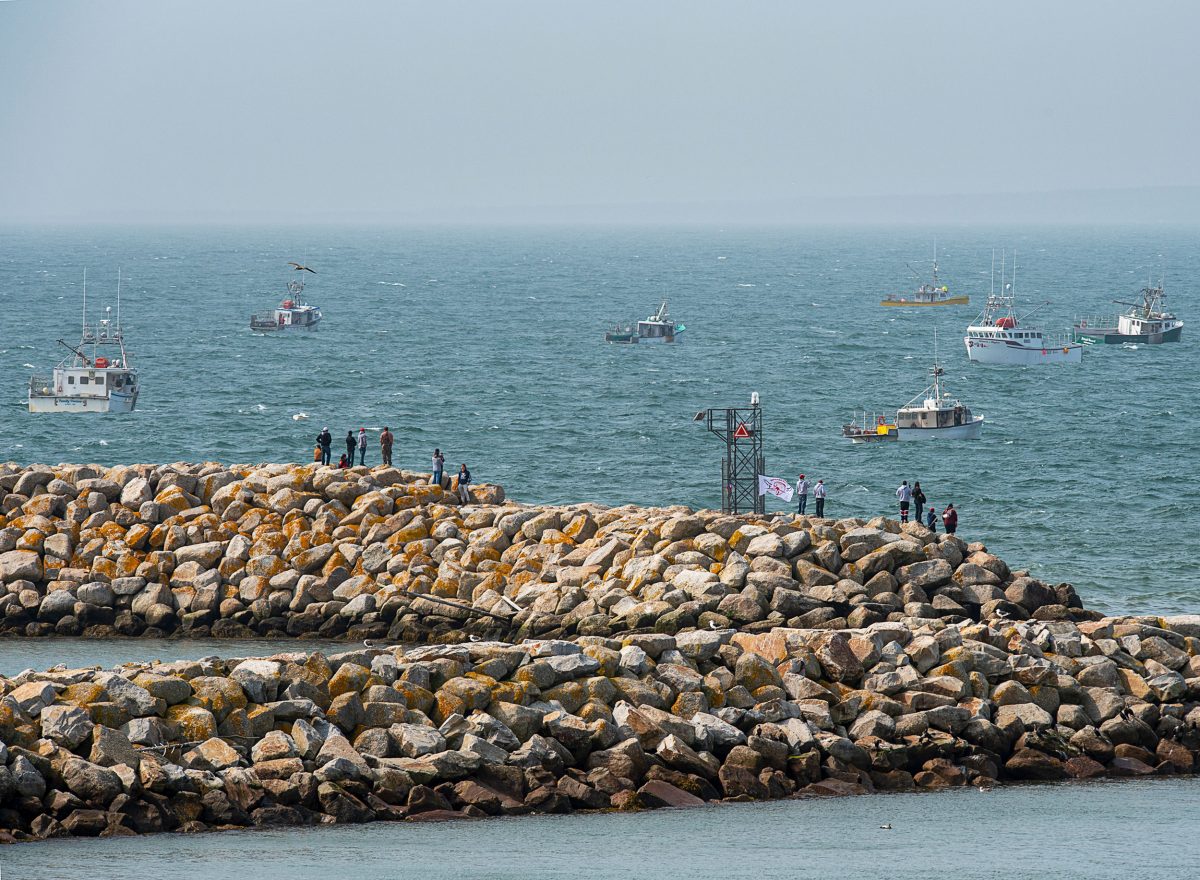 Fisheries and Oceans Canada spokesperson Heidi MacDonald said by email that the agency monitors the lobster population with an annual trawl survey, and that “the stock in [Lobster Fishing Area] 34 remains in the healthy zone, with high commercial biomasses and a broad size distribution.” Photo by Andrew Vaughan/The Canadian Press

Underlying these conflicts is a court ruling, made in 1999 by the Supreme Court of Canada, which determined that Mi’kmaw people—based on rights secured in the 1760–61 Peace and Friendship Treaties between East Coast First Nations and the British Crown—can fish year-round and earn a moderate livelihood selling the catch without a commercial license. The ruling, known as the Marshall Decision, was made in the case of Donald Marshall Jr., a Mi’kmaw man convicted by a lower court for catching and selling eels out of season.

The ruling confirmed that the Mi’kmaw right to fish, known as a moderate livelihood fishery, is distinct from commercial fishing and subsistence harvesting. Later, the Supreme Court clarified that DFO can limit this right for conservation purposes.

In the 21 years since, DFO and Mi’kmaw chiefs have not come to an agreement on how moderate livelihood fisheries should look in practice.

On the water in St. Marys Bay, Sipekne’katik fishers are now setting and hauling lobster traps without obstruction. On land, however, the situation continues to evolve. After days of talks with Sipekne’katik leadership, Bernadette Jordan, the minister of fisheries, oceans, and the Canadian Coast Guard, said the federal government would support a new Atlantic First Nations fisheries authority working directly with the Crown to establish new fisheries, provided the idea is supported by Mi’kmaw chiefs.

Excluded from these negotiations, commercial fishers continue to protest outside DFO offices in Nova Scotia, questioning the sustainability of the Sipekne’katik fishery.

To get to the heart of that argument, Hakai Magazine spoke with a range of experts to find out if the Sipekne’katik fishery poses a real threat to lobster conservation, or if something else is going on in St. Marys Bay.

Bob Steneck, a lobster biologist at the University of Maine, who specializes in marine biology and marine policy

Susanna Fuller, the vice president of operations and projects at Nova Scotia–based NGO Oceans North, who works in fisheries science, policy, and economics in Atlantic Canada and the Eastern Arctic

Megan Bailey, a fisheries scientist at Dalhousie University in Nova Scotia, who specializes in fisheries economics, management, and marine policy

Omer Chouinard, a professor emeritus of sociology and environmental studies from the Université de Moncton in New Brunswick, who helped found the Maritime Fishermen’s Union in 1977

Hakai Magazine: There are currently 10 Sipekne’katik moderate livelihood license holders fishing with a total of 500 traps in St. Marys Bay, following the nation’s lobster management plan. Is this fishery a conservation issue for the lobster population?

Steneck: The American lobster—the same lobster in Canada and in Maine—is perhaps the only species on the planet that’s been targeted for 150 years and is, by and large, doing better today than ever before. … I can’t say we completely understand [why], except that lobster traps are not 100 percent efficient. … That inefficiency probably is crucial to the sustainability of these stocks.

I would love to see a study that would look at coves where [the Sipekne’katik are] fishing—a before-after control-impact study. I would be willing to bet you a beer that there’d be no effect, relative to the control areas that are not fished.

Fuller: I don’t think it is a conservation concern. … If you compare this to the lobster fishery writ large in Atlantic Canada or in the State of Maine, the traps are a small fraction of the actual effort. In Atlantic Canada, we have about 3,000 lobster licenses. The average number of traps [per license] is 300. So that’s 900,000 traps, and this is far less than that.

Charles: In the regular commercial lobster fishery [in Lobster Fishing Area 34], that’s something like one person’s lobster traps.

Of course, there is the question of other First Nations starting up fisheries as well. And there’s also a question of where the fishing is actually taking place. If it’s concentrated in one location where there’s already fishing activity going on, then that can have more of a local impact.

Bailey: There’s nothing inherently sustainable or unsustainable about that particular fishery. It’s the cumulative impact of all of the fisheries over the year. If there was no commercial lobster fishery, would [the Sipekne’katik] fishery be sustainable? What is completely missing is the fact that you can’t take the system and say, Well, the system is sustainable, so now we add one more fishery, therefore it is unsustainable. … The additional mortality impact of the current scale of the livelihood fishery—I don’t think is a conservation concern. But we are talking about one [Mi’kmaw] band exercising their right. There will be other bands. … So, that is an evolving space in terms of how this fishery scales up.

Hakai Magazine: Some commercial fishermen have suggested that, by fishing out of season, the Sipekne’katik moderate livelihood fishery will interfere with lobster molting and reproduction, which happen in summer and early fall when the water is warmer. Is that a concern?

Bailey: After the molting, females tend to spawn, and then females are carrying their eggs with them for nine to 11 months. … There are regulations across the lobster fishing areas about bringing up egg-bearing females, because that can happen months after this time period. Even when you’re fishing in November, December, January, February—you’re pulling up females that have their eggs on them and have to throw them back. So, I don’t think it’s fair to point that out for the summer fishery, because that situation is going to exist for nine to 11 months.

Fuller: I do think [lobster fishing seasons] have some conservation outcome, but they were not initially only conservation driven. … The State of Maine fishery has no seasons. It’s a year-round fishery, and fishermen have about three times as many traps as Atlantic Canada. Because [lobster is] an effort-controlled fishery, there are different ways of managing it, and Canada has chosen to manage it with seasons that maximize the amount of hard shell lobster on the market.

If you do catch lobsters when they’re molting and their shell is soft, there is a greater chance of mortality from handling, and they don’t ship as well. … It’s interesting because I’ve worked with hundreds of lobstermen on the coast of Maine, and the lobstermen all prefer soft shell—and I do, too—but there is [higher] market value [for] hard shell.

Hakai Magazine: If the current scale of the Sipekne’katik moderate livelihood fishery is not a conservation concern for the lobster population, why has it been so contentious?

Charles: [Commercial] lobster fishers have been engaged over decades in a bit of a struggle to get the government to let them make some of their local decisions themselves. … So, the mostly non-Indigenous fishers have bought into the management system that’s there. They believe in the closed seasons that are set, and they believe that they’re fishing as much as they should be fishing.

Chouinard: Some people have the conception that the First Nations are poaching. It’s not the case. It’s the subsistence fisheries, and the moderate [livelihood] fisheries. [The government has] to establish parameters and explain that to the communities. Because the tendency of some people who don’t have a good intention [is to say], “If they are doing that, if they’re poaching, we’ll go poaching, too.” And it’s not the case.

Fuller: At the end of the day, we have a racism problem, and that is one thing to unpack. The other thing is that the government needs to deal properly with moderate livelihood [fishing] on a community-by-community basis. And that is going to be hard. But we have to come to a place where we can talk about all the issues on the table, because if we don’t resolve the violence and the anger—what people are feeling—then we’re not going to get to that spot.

The overall solution to this particular current dilemma is not to simply increase the number of traps and increase the length of fishing time by itself. If you’re going to increase traps in one spot—like if the First Nations who have recognized treaty rights to fish are increasing their amount of fishing—then something has to give somewhere else in the fishery.

Bailey: If what fishermen are saying is that the total effort in this fishery is fully subscribed … then under a hierarchy of rights, the commercial sector is going to have to be the one to fish less.

Hakai Magazine: What are the next steps to resolving the uncertainty and conflict around First Nations’ moderate livelihood fisheries in the Maritimes?

Chouinard: It’s not an easy thing, you know, because our history is a colonial history. Negotiation, education—it’s a long process. You have to be at the table with the federal government, with the First Nation, and with commercial fishermen to try to arrive at a compromise. It’s not a consensus, it’s a compromise.

Bailey: Can we have collaborative coexistence of a commercial sector and an Indigenous sector? Of course we can. But parties have to be willing to show leadership to get us to there. Parties being, you know, fishing association heads and government heads and First Nations leaders.