This house sank into the ground after the permafrost beneath it melted. Photo by Gloria Dickie

If you were looking for the front lines of Arctic climate change, most Alaskans would point you westward to the tiny coastal town of Shishmaref. Here, rising temperatures are causing the permafrost that holds the ground together to quickly thaw. The Chukchi Sea’s stormy swells, ever battering the shore, are gaining new strength over the loosened earth. The sea is stripping the island’s edges, leaving houses teetering over cliffs. Such dramatic decay has turned Shishmaref into a poster child for Arctic climate change. But according to new research, many people in the North could soon see the sea claim their land, too—though in a far more subtle way.

Deep in the recesses of the United States Army’s Cold Regions Research and Engineering Laboratory’s Permafrost Tunnel in Fox, Alaska, Vladimir Romanovsky, a permafrost scientist, motions to a 10-meter-wide mass of ice that blankets two of the tunnel’s walls and the ceiling. 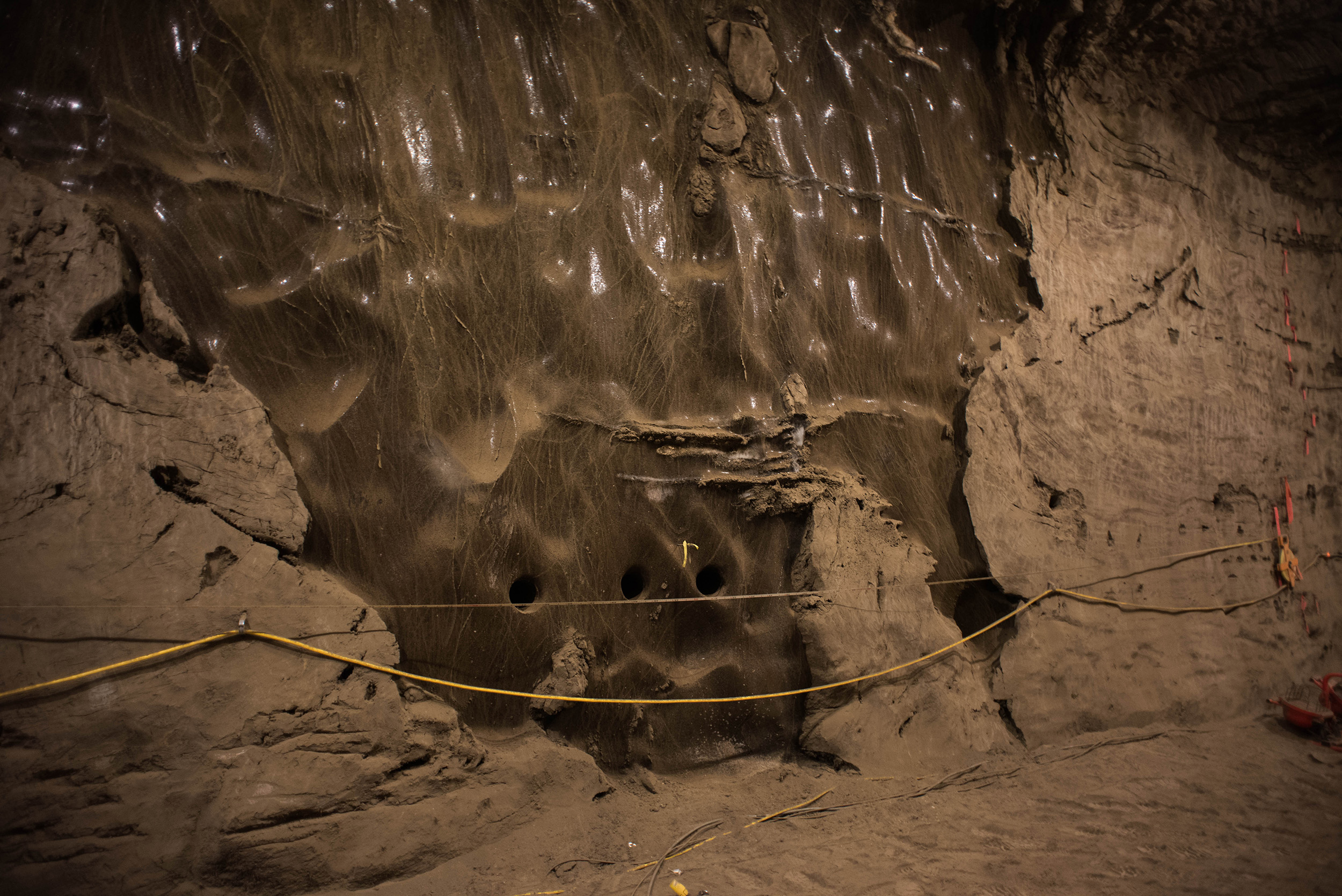 An ice wedge is visible from a tunnel at the army’s Cold Regions Research and Engineering Laboratory. Photo by Gloria Dickie

Massive ice wedges like this one, Romanovsky says, can be found across Alaska’s North Slope and much of the high Arctic. Such wedges form over hundreds or thousands of years, when water seeps into cracks in the permafrost and undergoes repeated frost cracking and ice vein growth. Up on the surface, when the vegetation is thin enough, ice wedges appear as polygonal shapes spanning roughly 15 to 30 meters.

In some parts of Alaska, these ice wedges can comprise 70 to 90 percent of the upper permafrost volume underfoot, and they are melting much faster than scientists expected. The sudden loss in underlying support is causing land slumps that could ultimately put many parts of the Arctic under sea level.

“You can lose land to the ocean without coastal erosion, just because land in these Arctic lowlands is so low that any depression of several meters can allow it to fill with seawater,” Romanovsky says. “This process is not commonly known or discussed, but it’s happening.”

Though ice wedge degradation has been previously observed in individual locations, this new research is the first time scientists have been able to show, via remote sensing imagery and on-site observations, that rapid melting has become widespread throughout the Arctic. Ten of the 11 sites surveyed in three countries showed evidence of ice wedge degradation. Though big land subsidence is slowly playing out over several decades, it only takes a few years of warmer weather to trigger the initial onset.

At some study sites, the scientists found that a single unusually warm summer was enough to cause more than 10 centimeters of surface subsidence.

“Here we’re combining observations from people working in the field across the Arctic—Russia, Canada, and Alaska—where we’re seeing the same ice wedge melting phenomenon,” says Anna Liljedahl, the lead author of the study.

For Romanovsky, this phenomenon is a bit of a canary in the coal mine with regard to future changes to the hydrology of the Arctic.

“You can think of [melting] ice wedges as an early warning because it’s really just the beginning,” he says. “This process can accelerate the thawing of permafrost, which will greatly lower down the land’s surface.”

A good example, he says, is Barrow, Alaska, where the land is roughly three meters above the ocean. It’s quite possible, he says, that the region will see three meters of subsidence within the next 100 years.

“We were not expecting to see these dramatic changes,” he says. Though some parts of the Arctic have seen subsidence caused by surface disturbances—such as from the construction of buildings, roads, or pipelines—Romanovsky says it was startling to find such changes in largely undisturbed landscapes. “Whatever is happening, it’s something new for at least the last 60 years in the Arctic.”

In the coming years, scientists will continue to monitor permafrost sites around the Arctic, and expect many of the big subsidence issues to play out over the span of a few decades.