The first vaquita caught by VaquitaCPR—a juvenile—had to be released. The international group was aiming to establish a captive breeding program for the highly endangered porpoise. Photo by Ministry of the Environment and Natural Resources/Reuters

The little porpoise seemed perfect. She had been lifted from the ocean onto a boat, but her breathing and heart rate were regular. She was plump and well over a meter long. She looked old enough and healthy enough to bear young. When Lorenzo Rojas-Bracho joined the veterinarians alongside her around dusk on November 4, he bent to peer into her face. “It was one of the most beautiful sensations of my life,” he remembers. “Finally, I can see those beautiful eyes.”

At last, he thought, he was looking at a glimmer of hope in the otherwise grim future of the vaquita marina—the little cow of the sea—the world’s smallest and rarest cetacean.

Rojas-Bracho, a marine mammal expert at Mexico’s National Institute of Ecology and Climate Change, has studied the vaquita since the early 1990s. In that time, the species, found exclusively in Mexico’s Upper Gulf of California, has plunged from just under 600 individuals to fewer than 30. They are the unintended victims of fishers setting gill nets for shrimp and other creatures, and of poachers illegally netting a fish called the totoaba for their swim bladder, a product worth thousands of US dollars on the Chinese black market.

Vaquitas are famously elusive and shun the noise of boats. Rojas-Bracho, like others who study them, learned much of what he knows about the vaquita from a great distance, or by examining carcasses found adrift at sea or washed up on the beach.

Now here was a living one, the first adult caught during a desperate, meticulously planned effort to stave off the species’ extinction.

In this rare footage captured in October 2008 by videographer Chris Johnson, live vaquitas slice slowly through the Upper Gulf of California. Video taken under permit (Oficio No. DR/847/08) from the Comisión Nacional de Áreas Naturales Protegidas (CONANP)/Secretaría de Medio Ambiente y Recursos Naturales (SEMARNAT) within a natural protected area subject to management decreed as such by the Mexican Government.

Government authorities, scientists, conservationists, and others have spent decades trying to slow the species’ decline. Gill net bans, alternative fishing gear programs, and a Herculean enforcement effort against poaching have so far failed.

So starting on October 12, 2017, nearly 70 leading cetacean biologists, veterinarians, and other experts from nine countries gathered in San Felipe, Baja California, under the leadership of Rojas-Bracho and Mexico’s environment ministry for a last-ditch effort they called VaquitaCPR. They wanted to catch what vaquitas they could, safeguard them in an in-sea sanctuary and, if they tolerated care, eventually begin a captive breeding program. The plan was risky and controversial, yet it appeared to be the only way to buy the porpoise time.

In the first few days, the team could hardly believe their luck. Reports delivered by acoustic monitoring experts, who tracked vaquitas by their calls with remote sensor data retrieved daily by local fishermen, helped guide spotters with giant binoculars toward several fat and healthy-looking vaquitas. Then, about a week in, the team managed to corral a juvenile into a net. Veterinarians monitored the young vaquita carefully for signs of capture myopathy—stress that could lead to her sudden death, as can happen with some other dolphins and porpoises.

“These are species which have no concept at all in their world of a barrier, or of being restrained or handled,” says Grant Abel, a marine mammal care expert based in Hong Kong and part of the core VaquitaCPR management team.

The young vaquita did not take well to a specially designed offshore enclosure. She swam in circles and kept bumping into handlers there to guide her away from the taut netting of the pen’s walls. After four hours in the team’s care without a change, they released her. They hoped an adult would handle the circumstances better.

But catching another vaquita was not so easy as the first had been. The weather turned, with unseasonable winds kicking up lumpy seas that made a diminutive vaquita’s 20-centimeter-tall dorsal fin impossible to spot. Some days the team had narrow windows of calm in the morning and afternoon to survey the sea. Other days they had none. The researchers also quickly realized that vaquitas are exceptional escape artists.

“If you kill 95 percent of the population, the five percent that’s left is probably not random,” says Barbara Taylor, a geneticist with the US Southwest Fisheries Science Center who coordinated catch efforts from a converted Bering Sea crab boat. Those that remained were likely more adept at avoiding the nets that fishermen and poachers set throughout their home. Now, they dove more than nine meters below those placed by would-be rescuers, or swam easily around them. 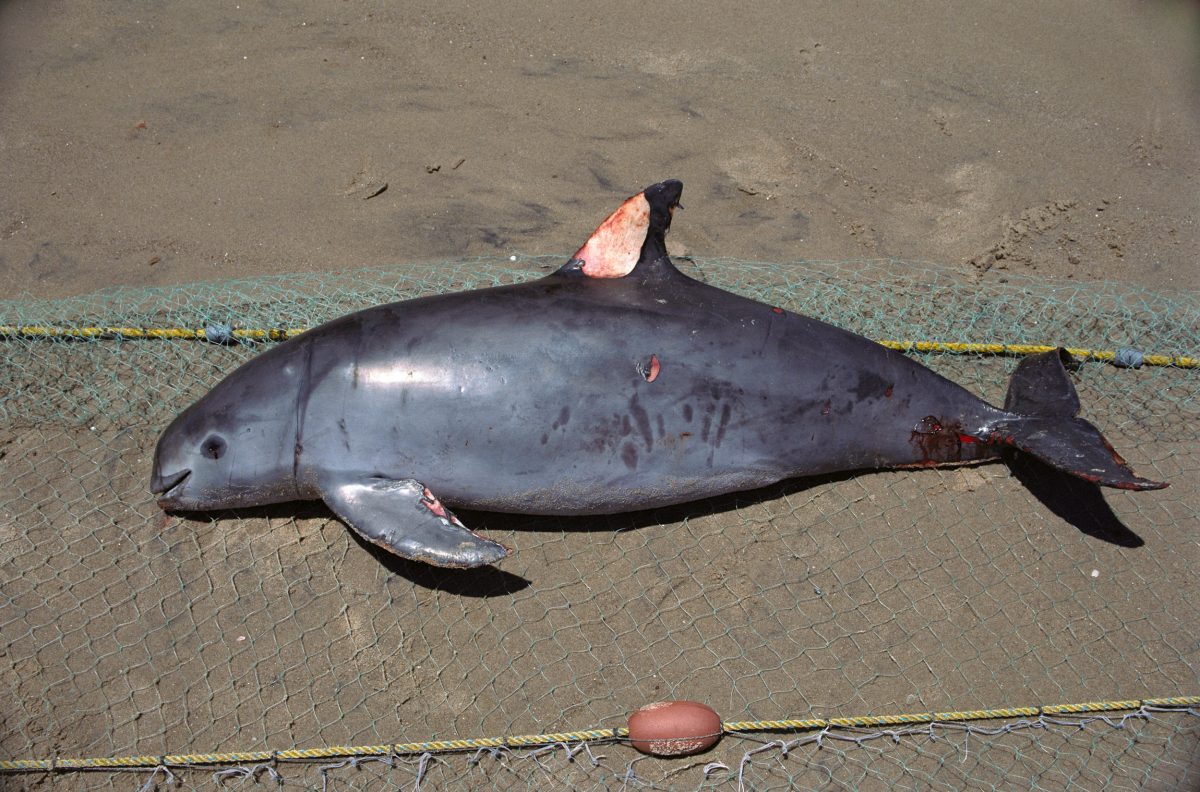 The vaquita has been nearly wiped out, killed as unintentional by-catch. Now, there are fewer than 30 vaquitas left. Photo by Flip Nicklin/Minden Pictures

A group of Danish scientists with years of experience catching and tagging harbor porpoises modified the capture strategy, and then modified it again. One day, the team hoped to set their nets far ahead of a group of vaquitas that was swimming in a consistent direction. If they then tailed the animals slowly by boat, they figured, they could surprise the vaquitas as they neared the nets and force them into the trap.

But the vaquitas had other ideas. They milled around, swimming randomly rather than setting any particular course. “It was one of the most impressive displays of vaquita craftiness,” says Taylor. The rescuers had surrounded the group in eight boats and could see their targets clearly. “And they disappeared,” she says. “It was just jaw dropping.”

“They really deserve their reputation of being fantasmas,” Taylor says. “You know, ghosts.”

Too soon, the project wound into its final week. At dawn on November 4, Rojas-Bracho noted a full silver moon setting alongside the rising sun. He took it as an auspicious sign. If they were going to catch vaquitas, it needed to happen now.

There were just a couple of days of good weather left in the forecast before the team disbanded. Their next chance wouldn’t be until spring, when it would be too risky to catch vaquita females—crucial to the planned captive breeding program—because they would be nursing new calves. And in between loomed totoaba poaching season; no one was sure the vaquitas would survive it.

And then, miraculously, the team caught an adult female in the late afternoon. She hadn’t spun or struggled in the net. Three veterinarians kept tabs on the animal in a special foam-bottomed box aboard the transport boat, wetting her with seawater.

Once she was in the enclosure, she seemed to grasp her environment quickly, says Frances Gulland, the lead VaquitaCPR veterinarian and a member of the US Marine Mammal Commission. She made swift, graceful corrections as she navigated the pen’s walls, “a bit like an Olympic swimmer doing turns in a swimming pool.” Soon she slowed as if she was calming down.

And then, abruptly, slow turned to sluggish, and sluggish to limp. The team immediately released her, but her swimming became erratic. She sped away from the pen at the water’s surface, and then turned and sped back. A few people threw themselves into the water, hoping to cushion her collision with the pen’s wall. When they caught her in their hands, she stopped breathing.

For three hours, five veterinarians worked to revive her. Twice, they coaxed her to breathe and lost her again. At 10:20 p.m., they finally stepped back. Rojas-Bracho looked up and noticed the moon had risen again. It was red.

Back onshore, soaking and devastated, the crew walked into the embraces of their colleagues and wept. Gulland and others turned to the necropsy, hoping to determine what had happened. They also saved tissues that may be of use in any future effort to understand or save the species.

Despite the scientists’ best attempts to learn her story in life, here they found themselves discerning, again, all they could about her from her death. The most painful insight: perhaps vaquitas will not tolerate captivity at all.

The next morning, the group decided to end the capture program. The team would instead spend their final days taking pictures for visual identification of individual vaquitas and continuing acoustic monitoring of the population. The species’ future now hangs entirely on efforts to end illegal gill net fishing. Still, says Rojas-Bracho, “hope is the last thing you lose.”

Scientists always recognized the risk of losing a vaquita. “This was an effort to save some animals that hasn’t worked as currently designed,” says Gulland. “But if we didn’t try this option, and the species went extinct, we would have asked ourselves why we didn’t try.”