Dickinsonia were quite large compared to the other creatures with which they shared the sea. One fossilized specimen discovered by paleoecologist Scott Evans was around a meter in diameter. Photo by Dotted Zebra/Alamy Stock Photo

About 570 million years ago, life in the ocean did something strange. The continents were gathered around the South Pole, and in the vast expanses of open, shallow water, life transformed from tiny unicellular organisms to drastically larger, multicellular creatures that resembled blobs, upturned bells, branched fronds, and worms, and lived on a seafloor covered entirely in slime.

For decades, scientists have been trying to understand this mysterious interval of earliest animal life known as the Ediacaran, including if these oddly shaped, soft-bodied organisms could move. Now, researchers studying new fossils have shown that at least one of these strange organisms actively moved on its own and, for the first time, they have explained how.

Scott Evans, the paleoecologist from the University of California, Riverside, who led the research, was particularly interested in Dickinsonia fossils: thin, plate-like organisms that were preserved, along with other Ediacaran life forms, when storms buried them alive in sand.

These organisms left impressions of their top surfaces in the overlying sand, says Evans, while their undersides, or “footprints,” were preserved when the sand filled the depressions they left in the slime.

To access these fossils, Evans and his colleagues excavated and pieced together over 35 storm-deposited sandstone beds they unearthed on a cattle farm at the Nilpena National Heritage Site in South Australia, creating a 300-square-meter surface of fossilized Ediacaran life forms that captures what life would have been like on the ancient seafloor.

The team scrutinized this surface, looking for clues, such as the directions the organisms were facing and their proximity to other structures, to test existing hypotheses about how Dickinsonia fossil footprints formed and what this reveals about if and how they moved around in the Ediacaran sea. 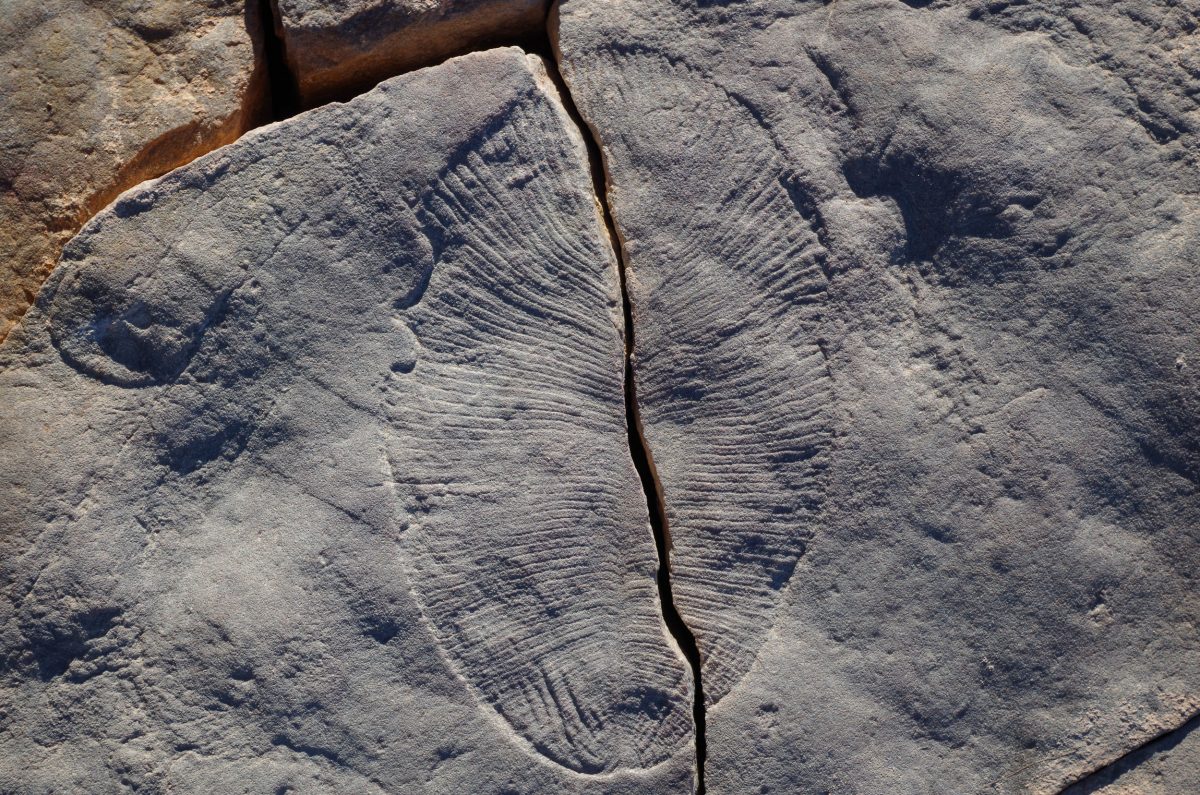 Some people argue that Dickinsonia footprints were formed as a result of their soft bodies collapsing and decaying after death from burial. Evans, however, found fossilized Dickinsonia that were ripped in half, and clearly dead before burial, that still left strong depressions in the organic mat. The top surfaces of the Dickinsonia also didn’t match the footprints in size or distribution patterns, which you would expect with decay, explains Evans.

Evans also dismisses the idea that Dickinsonia footprints represent touchdown spots where the animals landed after having been picked up and transported by currents. If that were the case, he says, the footprints would all be aligned on the seafloor in the same direction as the current, but they were facing all directions.

Instead, Evans and his colleagues found individual Dickinsonia tracks of up to 12 successive footprints that were consistently orientated in a forward direction, with the distance between each footprint averaging the size of the organism itself.

Convinced that Dickinsonia moved across the seafloor, the next question to answer was how.

Evans suggests Dickinsonia moved in a similar way to the modern earthworm, by alternating waves of muscular expansion and contraction. A few Dickinsonia fossils clearly look to be expanded on one side relative to the other, and it seems the Dickinsonia were alternately expanding and contracting the muscles fixed to their midlines to move slowly along the seafloor, he says.

If researchers can get a handle on how these organisms moved and infer from that what the arrangements of their muscles and tissues might be, then that’s a back door into understanding where these mysterious animals might fit in the history of life, says Simon Darroch, a paleoecologist from Vanderbilt University in Tennessee who was not involved in the study.