Thirteen percent of western snowy plovers breeding along the coast of California’s Humboldt County are responsible for producing half of all the snowy plover chicks born there every year, and their success comes down to one thing: where they put their nests. Plovers and their eggs are small and well camouflaged, which keeps them hidden from the probing eyes of hungry predators. But some plovers up their survival by choosing better real estate: those that build their nests on riverside gravel bars have an advantage over those that opt for sandy beaches.

The sparrow-sized birds are listed as threatened by the US Fish and Wildlife Service. The agency’s recovery plan lists three factors that limit the snowy plovers’ potential for recovery: habitat degradation due to invasive plants, human disturbance, and predation of eggs and chicks by ravens and crows.

To learn which of those threats has the biggest effect, wildlife biologists from Humboldt State University spent 12 years painstakingly monitoring a population of 200 snowy plovers nesting in Humboldt County. They tracked each male and female bird over the course of its lifetime to determine how many eggs it was responsible for, and how many of those chicks survived fledging. By calculating each bird’s reproductive success, researchers Dana Herman and Mark Colwell determined which threats made some eggs less likely to hatch and some chicks less likely to survive.

The researchers found that neither human activity nor predator abundance affected the plovers’ success. And building enclosures to protect the eggs didn’t help either—the cages couldn’t protect the chicks once they’d hatched and also made convenient perches for raptors in search of adult plovers. Instead, the researchers found that plovers nesting on gravel bars along the Eel River successfully produced more than double the surviving offspring than did those nesting on nearby beaches. (Even more impressively, they did so while laying fewer eggs than those nesting on sand.) Average gravel-nesters fledged three to four chicks over the course of their lives, while sand-nesters fledged one to two of their offspring. 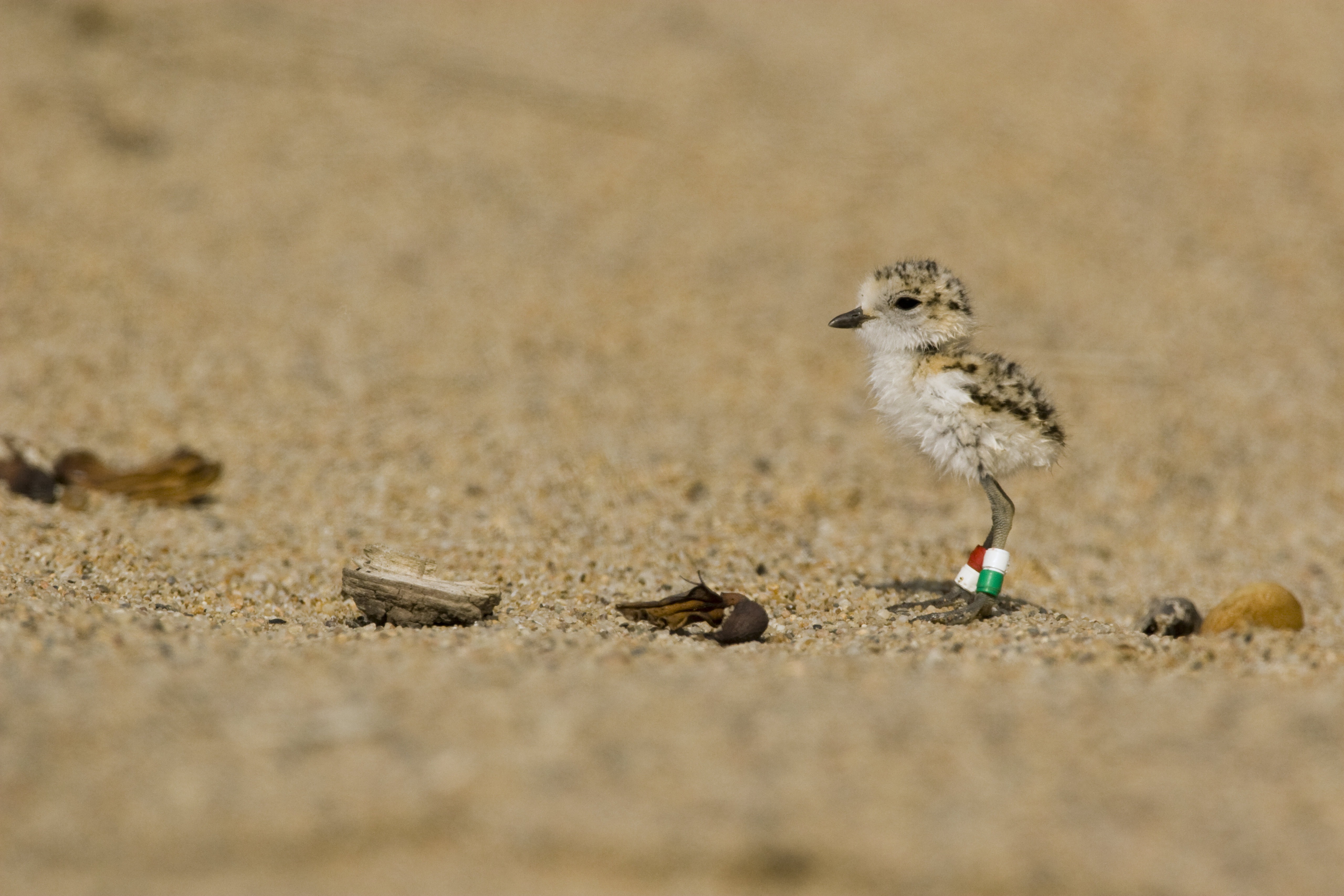 This western snowy plover chick is adorable, but by standing on the sand it is much less camouflaged. Photo by Sebastian Kennerknecht/Minden Pictures/Corbis

Unfortunately, the area’s plovers mysteriously stopped nesting on gravel entirely in 2010. “Maybe they came back to nest and the water levels [in the river] were too high that year, so they started nesting on the beaches,” Herman speculates. And because the birds tend to nest in the same places at which they hatched, they’re stuck in a negative, sandy feedback loop.

Perhaps the beach will eventually become so uninviting that the plovers will again attempt nesting along the river’s gravel-covered bars. Until then, wildlife officials can sprinkle the beaches with crushed seashells to better conceal the eggs and hatchlings from the prying eyes of crows and ravens, a method that’s been successfully used in Oregon and Southern California. It wouldn’t exactly turn the beach into prime shorebird real estate, but it can still make the neighborhood safer. And what homeowner wouldn’t want that?