Between June and December 2017 alone, eight fishermen operating out of Isla San Esteban, Mexico, illegally caught and killed as many as 14 great white sharks. Plying the waters of the Gulf of California in small boats known as pangas, they hunted down the enormous fish, hauled them to remote beaches, and dismembered them. To conceal their activity, they mixed the flesh in with their legal catch. From each shark the fishermen kept a tooth. From one, they extracted a full set of jaws.

Marine biologist Daniel J. Madigan, now with the University of Windsor in Ontario, was setting up a research project in the area at the time. While interviewing fishermen about their practices and the species they encountered, he heard rumors of shark poaching.

After gaining the trust of the poachers, he was allowed to examine the teeth they had collected and was given copies of graphic photos and video depicting their harvest. Using models based on known white shark measurements, he and his colleagues determined that four of the 14 sharks were juveniles and more than half may have been mature females.

If accurate, these recently published findings are alarming. The death of even a handful of mature white sharks is cause for concern, as there are thought to be only a few hundred adults in the eastern North Pacific (ENP) population.

The study reveals how little is known about great whites in the Gulf of California. Though there have been sporadic reports over the years, there hasn’t been strong evidence that they frequent the area in great enough numbers to support a fishery of this size.

“Clearly there are more of them than has been acknowledged in the literature and in the popular press,” says study coauthor Aaron Carlisle, a shark specialist at the University of Delaware.

The extent to which the sharks found in the Gulf are connected to the greater ENP population, which is divided between aggregations at Isla Guadalupe, Mexico, west of the Baja California peninsula, and the Farallon Islands, off the coast of San Francisco, California, is unknown. But scientists have tracked a few tagged females from Isla Guadalupe, and one tagged juvenile released off the coast of California, moving into the Gulf. Interchange is thus highly probable.

The large number of adult females captured, combined with the timing of the entry of tagged females into the Gulf, also indicates something particularly exciting: the area may be a great white shark pupping ground. Newborn sharks are relatively common on the western coast of Baja California. The Gulf—with its long stretches of continental shelf and abundant fish—may be an additional birthing ground, or at least a nursery for growing youngsters. 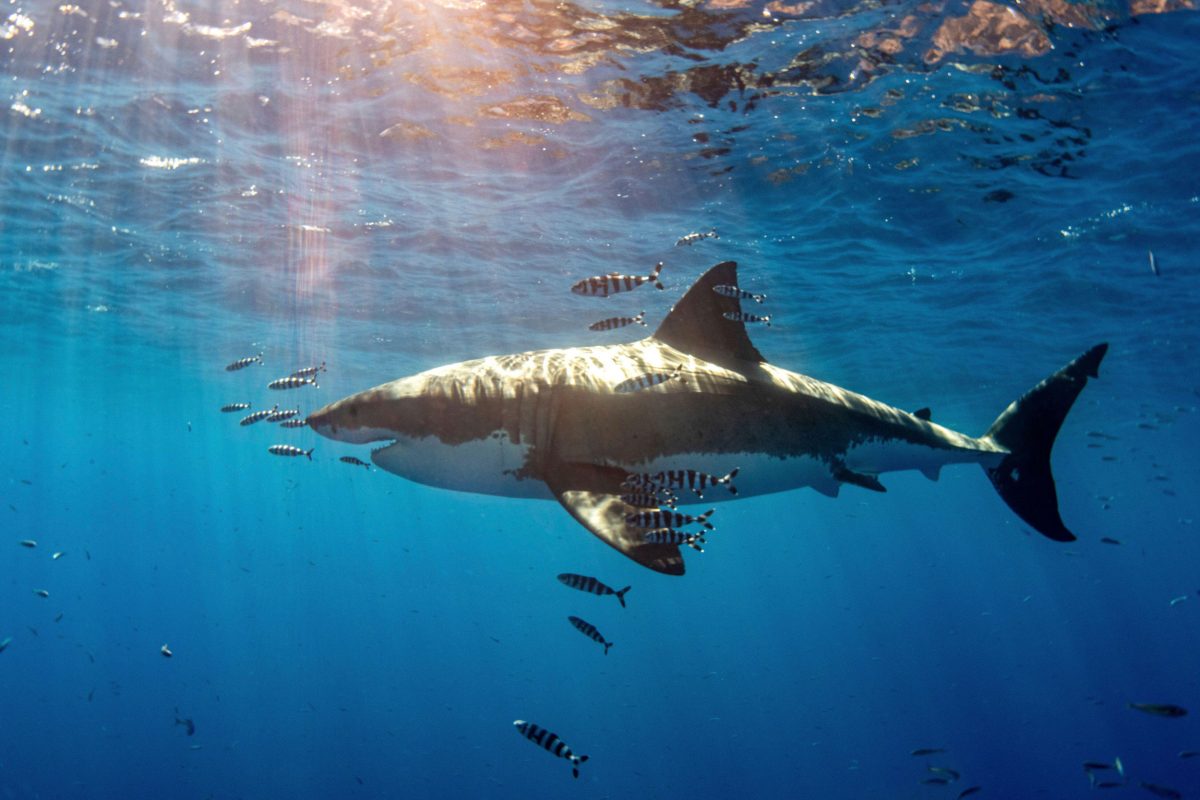 Chris Fischer of Ocearch, an organization that collects and disseminates data about marine organisms, says that his team found evidence of young great white sharks being harvested in the Gulf of California between 2007 and 2010, well before the findings of a new paper. Whether or not they were newborns was unclear. “They were decomposing. We could identify them because of their jaws and their teeth. They were small,” he recalls of the remains discovered at fishery dumping grounds. Photo by Brook Peterson/Stocktrek Images/Alamy Stock Photo

Harvesting great white sharks of any age is prohibited by Mexican law, as well as by the Convention on International Trade in Endangered Species. But the Gulf of California is large, and resources to monitor impacts on fish populations are scant. Most of the 26,000 boats operating in the Gulf are pangas like the ones used by the poachers working out of Isla San Esteban. Many operate illegally, and most of the fishermen who pilot them eke out a living at or below the poverty line.

Their reliance on the Gulf’s resources is taking a toll. Some 80 percent of fishing in the Gulf of California is considered unsustainable. Indeed, as stocks of reliable commercial species continue to plummet, fishermen increasingly turn to less conventional sources of income—like the great white shark. Yet with shark meat selling for pesos per kilogram, white shark fishing is barely worth the effort.

Because of this, the researchers were initially hesitant to publicize their findings, fearing the consequences for the economically vulnerable poachers.

“It was an ethical dilemma for me,” Madigan explains. “I didn’t love the potential side effects of publishing the paper. But once I had that information, I felt obligated to put it out there.”

This uneasiness is echoed by Felipe Galván-Magaña, Luis Malpica-Cruz, and other prominent Mexican scientists who study the white shark. They further worry that the exposure of these practices may jeopardize their relationships with the fishermen on whom they depend for information.

“The fishermen are going to close the door on us. No more samples. No more research,” says Galván-Magaña, a pelagic fish researcher at the Mexican Interdisciplinary Center for Marine Sciences.

The Mexican researchers also expressed concern that the findings read as sensationalistic and overestimate both the number of sharks in the Gulf and the extent of their exploitation. The paper suggests that there may be a significant population in the Gulf, but that would be a far departure from a 2010 survey that found only 38 records of great whites in the area between 1964 and 2010. And, they note, Madigan only has the fishermen’s word that each tooth came from a separate specimen.

“Interactions [between fishermen and white sharks] do happen,” Malpica-Cruz, a marine ecologist at the Oceanographic Research Institute at Mexico’s Autonomous University of Baja California, says. “But in the paper, they’re magnified.”

George Burgess, director emeritus of the Florida Program for Shark Research at the Florida Museum of Natural History in Gainesville, thinks that publishing the study was worth it even if the numbers it presents do ultimately wind up being too high. “It’s a classic example of what we need to do sometimes, which is to try to get a feel for a situation under conditions of minimal data gathering ability,” he says.

A great deal of additional research remains to be done to verify the extent of the great white shark population in the Gulf of California, and to assess its potentially vital role in supporting the young of these crucial predators. Until then, the fates of both fishermen and sharks remain a matter of clandestine migrations, unenforced regulations, and taut fishing line.