All that separates India’s Pulicat Lake from the Bay of Bengal is a thin strip of land. Photo by Manivannan Thirugnanasambandam/Alamy Stock Photo

Rajalakshmi takes pride in her prawn gravy. The trick, she says, is to add prawns to a boiling pot of gravy as soon as her husband comes home, usually in the wee hours of the morning, with a fresh catch harvested from nearby Pulicat Lake. “You won’t get this taste anywhere else,” she says.

Pulicat Lake is separated from the mighty Bay of Bengal by just a thin strip of land. Encompassing 481 square kilometers, it is India’s second-largest brackish lake. For Rajalakshmi’s family and 50,000 others in the states of Tamil Nadu and Andhra Pradesh, the lake is a source of food, a natural barrier against the vagaries of the sea, and, increasingly, a bulwark against climate change.

But Adani Ports and Special Economic Zone Limited (APSEZ), an Indian shipping company, is working to expand an existing port in nearby Kattupalli, a dozen kilometers south of Pulicat Lake. APSEZ is proposing to increase the port’s capacity from roughly 25 million tonnes per year to 320 to support the region’s coal-fired power plants, oil refineries, and car factories.

If the project goes ahead, however, Rajalakshmi says it would put her community at risk. “Not just our livelihood, but our lives will also be under threat.”

Expanding the port would change the coastal landscape drastically. APSEZ plans to dredge 85 million cubic meters of sand to expand the harbor and shipping channel, according to the development plan. Nearly half of the planned 2,500-hectare facility will be constructed on sand dredged from the sea. The company will also build two new breakwaters to protect the port from ocean currents.

Nityanand Jayaraman, an Indian human rights activist, is worried about the effects this construction would have on the thin strip of land that protects Pulicat Lake from the sea. “While the dredging would destroy the naturally occurring shoals, the new breakwaters will stop them from being nourished by blocking the sand from migrating from south to north,” he says. “Without the shoals that act as natural barriers, the waves will hit the coast with unimpeded force. The thin strip of sand separating the Pulicat lagoon from the sea will erode, and the lagoon will eventually merge with the sea, putting densely populated regions at risk.” 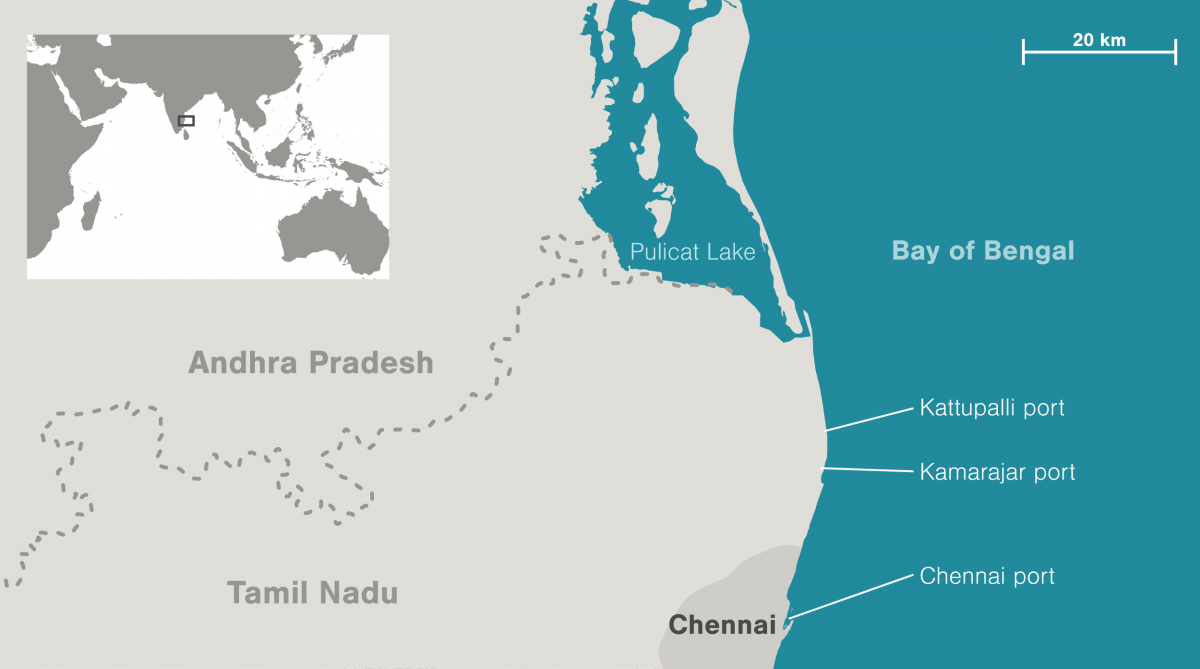 Three ports are located south of Pulicat Lake, which straddles the Indian states of Andhra Pradesh and Tamil Nadu. The nearest port, in Kattupalli, is expected to expand substantially—pending a decision by India’s Ministry of Environment, Forest and Climate Change. Map data by OpenStreetMap via ArcGIS

People from across Tamil Nadu have seen similar consequences from other construction projects. Slightly farther south of Pulicat Lake, the coast near the Port of Chennai has eroded by 350 hectares since it was built in the mid-1800s, according to a 2006 report by India’s Ministry of Earth Sciences. The report warned that erosion caused by the Chennai port was increasing wave action that was disturbing the shoals that protect the lake from the sea. “If no intervention is planned, a threat to ecologically sensitive Pulicat Lake is inevitable,” the report said. Similarly, India’s Ministry of Environment, Forest and Climate Change (MoEFCC) noted last year that an existing breakwater at the Kattupalli port has caused more than 300 meters of coastal erosion in Kalanji, a nearby village.

The port expansion would further drive the existential threat to the region caused by climate change. Maps developed using new elevation data show that 35 million Indians are at risk of annual flooding by 2050, including those living in Chennai and in three other coastal cities. Regions north of Chennai, including those bordering the lake, are particularly vulnerable to this flooding, according to mapping by Climate Central, a nonprofit science and news organization.

A. Mugan, a fisherman and engineer, remembers when festivals were once organized on the beach outside of a temple south of the lake. “Now, there is hardly any space,” he says. The temple is dilapidated, and people have grown fearful of living on the shore. Breaking with tradition, village elders are now advising locals not to build houses along the sea. “The sea is coming closer right in front of our eyes,” he says.

Among the people from dozens of nearby villages who have come together to oppose the proposal by APSEZ to expand the port in Kattupalli is K. Saravanan, a fisherman and activist from Chennai. Equipped with maps and a keen understanding of traditional fishing wisdom, Saravanan has presented APSEZ and MoEFCC with charts showing land and revenue that have been lost to the sea because of previous port construction.

This work, along with a letter-writing campaign and protests organized by the fishing community and people from potentially affected villages, has forced APSEZ and the government to respond, Saravanan says. The government has sent a committee to take stock of the concerns, which were first raised in October, before it makes a decision regarding APSEZ’s bid to expand the port. “The environmental impact assessment, which is underway, will have to consider the issues we raised,” Saravanan says.

Rajalakshmi is not ready to give up her village, or her prawn curry, and Saravanan is confident that the community’s pushback is having an effect. Although APSEZ is hugely powerful, he says it’s telling that it took the company three tries to receive the necessary document to launch an environmental impact assessment. “This shows the power of public pressure.”