This petrel chick is one of 10 that will help found a new colony of this endangered bird. Photo by Kim Steutermann Rogers

Ecologist Robby Kohley peers over a sloped section of land at Hawaii’s Kilauea Point National Wildlife Refuge. Not a leaf stirs on any of the 10,000 recently planted shrubs, coastal grasses, and sedges, but that won’t last long. The trade winds are coming, expected to sweep across the Hawaiian Islands later in the week.

With knuckles incised by cuts, as if he’s spent time punching glass, Kohley reaches for a retrofitted plastic toolbox—and pulls out a chick. This baby Hawaiian petrel is partly to blame for the state of Kohley’s hand. But he’s also a sign of hope. This petrel chick is a founder for a new colony of petrels, and an important part of a bid to save this endangered species.

Every morning for the past three weeks, Kohley has collected 10 feisty petrel chicks from their nest boxes. In the padded toolbox, he carries them to a table where he weighs and measures each chick, then hand-feeds each a smoothie of fish and squid—trying, and failing, to avoid their sharp hooked bills.

“I want ‘Ten’ to fledge,” Kohley says, referring to the bird in his hands. Each chick sports a metal ID band on its leg, but Kohley calls the birds by the number on their nest box. “Ten is ready. When the winds get here, he’ll go.”

By “go,” Kohley means fly for the first time. If he goes, Ten would be the fifth of the ten to do so.

Although no Hawaiian petrels have nested at Kilauea Point in recent history, fossil records show that the seabird once bred in coastal areas across the Hawaiian archipelago.

The 10 chicks in Kohley’s care are part of an effort to turn back the clock. If all goes well, these 10 chicks, translocated from their natal grounds, will help the dwindling Hawaiian petrel expand beyond Kauai’s interior mountains, one of their last refuges.

The Hawaiian petrel was first federally protected in the United States as an endangered species in 1967. Because of their remote nesting sites, population counts are educated guesses at best, although scientists believe that the birds have suffered a 75 percent decline since the early 1990s. Their plight is shared by many of Hawaii’s native birds that have wrestled with shrinking habitat and introduced predators—cats, rats, dogs, and pigs.

Ten’s translocation is the culmination of five years of hard effort rebuilding a petrel-friendly ecosystem. Kohley works with the non-profit Pacific Rim Conservation, one organization in a multi-agency team, that have partnered to modify 0.3 square kilometers of land by building a US $300,000 fence that will block anything bigger than a two-day-old mouse, eradicating existing predators, and replacing invasive plants with native ones. 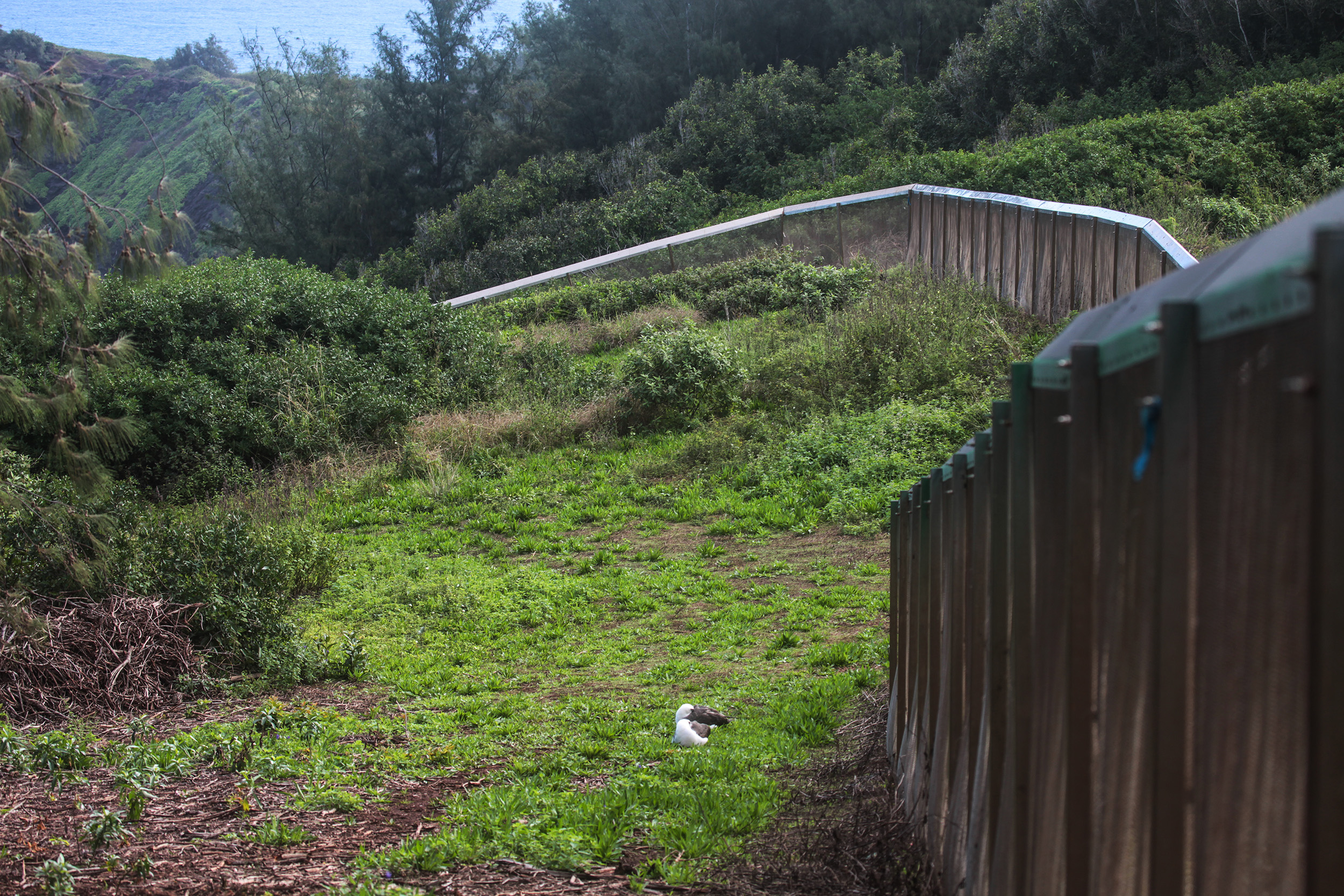 The wall stands about two meters tall and has a portion that descends into the ground, preventing predators from both climbing and burrowing into the refuge. Photo by Kim Steutermann Rogers

“One of the more difficult parts of this project was finding the birds to translocate,” says Dr. Andre Raine, coordinator with the Kauai Endangered Seabird Recovery Project.

Not only are the birds nocturnal, they lay their eggs in the back of burrows some two meters in length. For several years now, Raine’s team has employed radar and acoustic technology to locate breeding colonies in the mountains and motion-detection cameras with night vision to monitor active nest sites.

The plan should work, because petrels imprint on the burrows they emerge from as chicks. In three to five years, the birds will return to this place, looking for a mate. Still, Michael Mitchell, acting project leader for the Kauai National Wildlife Refuge Complex, says this is no quick save for the species.

“We’ll be protecting and managing this area at Kilauea Point for nesting seabirds for many, many generations to come,” he says.

And, the team plans on seeding the colony with more birds over the next several years, starting with 20 more next fall.

Yet for now, all eyes are on the new colony’s 10 founders—including little Ten. Two nights after he’s pulled from the toolbox, the winds arrive. Just as Kohley predicted, Ten takes to the air. Now, the wait for his return begins.