For hours, Cory Overton has been wading through a vast expanse of orange marsh in Oakland, California, straining to pick out a distinctive call over the sound of his boots sticking in the muck. Spotting a quill next to what looks like a tiki hut for a gnome, he stops and waits. A shrill cackle carries over the wind—kek-kek-kek.

Inching closer to inspect the source of the cry, Overton finally spots it: a tangerine bill, a cinnamon-hued breast, and long, scrawny legs—the chicken-sized bird known as the Ridgway’s rail.

From California to western Mexico and into Arizona and Nevada, habitat destruction is causing the population of Ridgway’s rails to plummet. The United States Fish and Wildlife Service listed it as an endangered species in the 1970s. Its numbers now rest in the low thousands, though its slow slide toward extinction continues. The rail has managed to hold on in places, such as the fragmented salt marshes of San Francisco Bay. But now, sea level rise is threatening to strip the bird of what little land it has left.

“Their survival rates are lowest when the tides are highest—in the winters,” says Overton, a biologist with the United States Geological Survey (USGS). “When the marsh plain is inundated, the rails grapple for cover.” When the birds seek higher ground, they’re at the mercy of falcons and other predators.

The ideal remedy for this crisis is to raise the elevation of the marsh, Overton says. But such massive restoration projects take time. Without human intervention, the rail will not survive, he says. Time is not in abundance.

So in 2010, Overton and his team began field-testing a device that they hope can save the embattled bird.

Ridgway’s rails live on the ground and build nests camouflaged in the dense marshland grasses. With the encroaching sea, it’s becoming more difficult for the birds to find a site safe from flooding. While the elevation of the marsh remains the same, the birds can still be given a way to escape.

In the Arrowhead Marsh, a 200,000-square-meter mire not even a kilometer from Oakland’s Oracle Arena, Overton and his colleagues installed 10 artificial islands—refuge habitats for the rails. Each island has a base slightly smaller than a twin bed made from recycled plastic and high-density foam. Sitting on the base is a frame woven through with palm leaves. The refuge is tethered to the marsh with rope, and affixed with a motion-sensing camera. 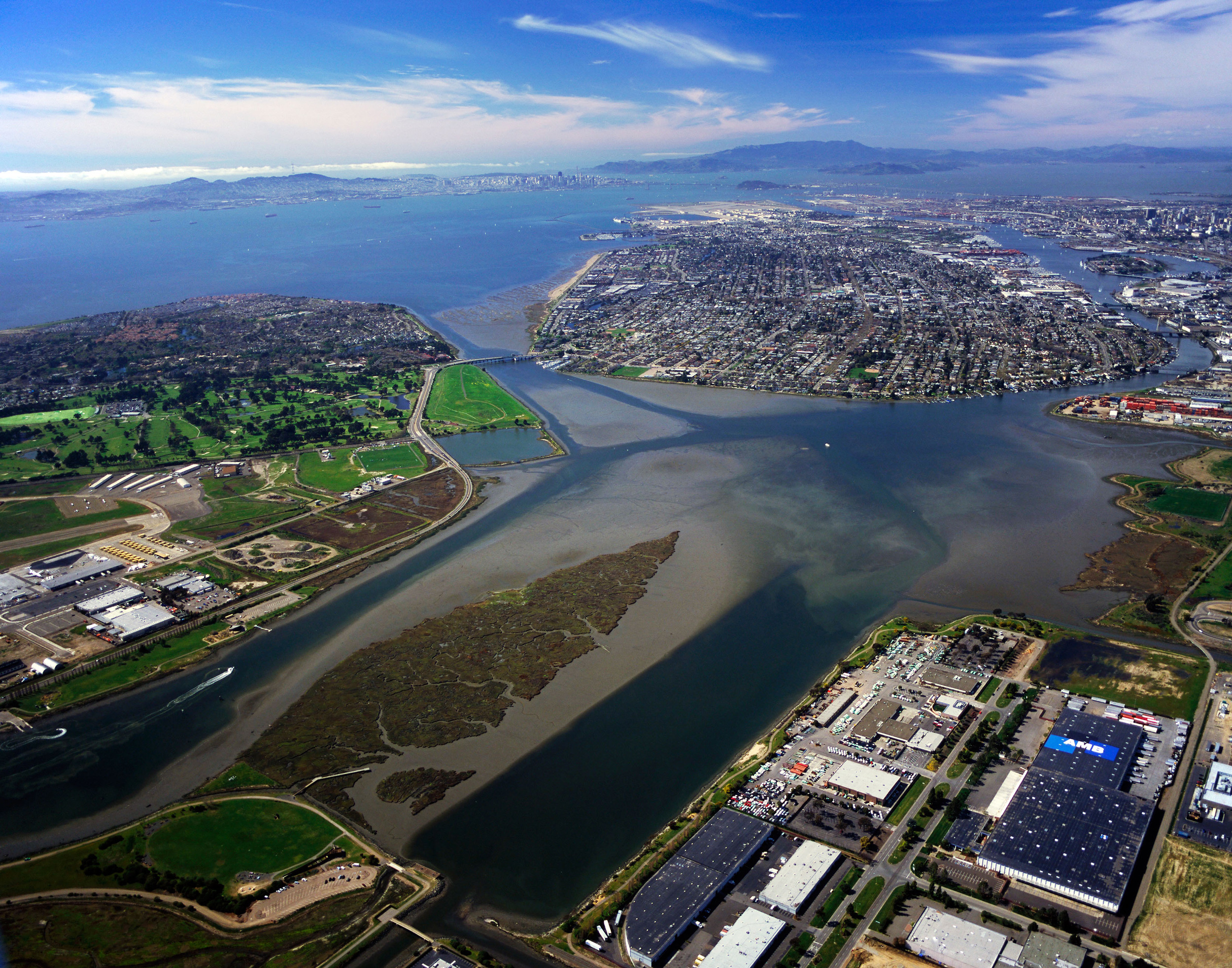 The Arrowhead Marsh, in Oakland, California, is nestled between the city and San Francisco Bay. Photo by Aerial Archives/Alamy Stock Photo

The researchers were not disappointed. “Within a few weeks, every island was visited by the rails, sometimes for hours each day,” says Overton. In the first year, the cameras recorded the birds 85,582 times. By the end of the first winter, individual pairs had taken up most of the islands.

Since the success of that pilot project, Overton and his team have refined the design of the islands to make them smaller, less expensive, and easier to maintain. The islands were originally intended to help the birds survive the winter. “Now we want the birds to make these rental spaces their homes, regardless of the season,” he says.

Since 2010, the team has deployed five different island designs with about 200 individual islands in 12 different marshes. Most were installed throughout California, in Arrowhead Marsh, Cogswell Marsh, Greco Island, Whale’s Tail Marsh, and Robert’s Landing.

Ultimately, even Overton’s improved island habitats are unlikely to save the Ridgway’s rail. Rising seawater will continue to drown coastal salt marshes, and with them, the rail’s chance for the future.

“The plight of the rail is an indicator of what is happening in front of our eyes,” says Neil Ganju, a USGS oceanographer who has studied the effect of sea level rise on eight salt marshes on the United States’ east and west coasts. Among them, the Seal Beach National Wildlife Refuge, south of Los Angeles, which is home to a population of Ridgway’s rails. “None of the eight is keeping up,” he says.

Ganju’s research shows that half of these marshes will disappear within 350 years if they don’t regain some lost ground. The other four are backsliding as well, albeit at a slower pace. Other studies predict that in San Francisco Bay, as much as 96 percent of the marshland is set to become mudflat by 2100.

Regardless, Overton sees signs for hope. In that first spring after installing their island habitats in Arrowhead Marsh, the team was greeted with a sweet surprise.

Inside one of the habitats, the researchers found a nest. Inside the nest, there was an egg. “It was hatching on the day of our site visit,” says Overton. Soon after, a downy black chick was walking unsteadily across its island home.

Had the birds been nesting on the ground, their nest would have most likely drowned in the storm water and early spring tide that flooded the marsh the week before, says Overton.

“Fortunately, the artificial island kept the nest high and dry.”