An archaeological site in northern Australia has revealed some surprising new evidence of the peopling of Down Under that promises to upend the debate on human migration across the globe. Photo by Dominic O’Brien

They were typical humans. They hunted and gathered. They ground nuts, plants, and seeds, and built hearths. They also worked the oldest-known ground-edge axes and used the oldest-known reflective pigment. They lived, surprisingly, 65,000 years ago in Australia, which pushes back the earliest-known settlement of Down Under by 15,000 years.

That’s the scenario sketched out by new research published today in the journal Nature by an Australian research team working at the site of Madjedbebe. The findings may help answer some of the enduring questions of archaeology: when did Homo sapiens first build boats that could cross open ocean, how long did they coexist with other hominin species in Southeast Asia, and when did these modern humans migrate out of Africa?

“It’s really the end of the route, but somehow we get earlier dates in Australia than in places like Europe,” says Zenobia Jacobs, a professor at the University of Wollongong in Australia and the project’s geochronologist.

In recent years, the picture of early human migration has become ever more complex and surprising. Scientific evidence suggests that modern humans first reached Europe approximately 48,000 to 40,000 years ago, encountering groups of their Neanderthal kin who were already living there. The descendants of the more mysterious Denisovans may have roamed in China up to 125,000 years ago, and Homo floresiensis (aka the hobbit) seem to have inhabited Indonesia 190,000 to 50,000 years ago. Even Homo erectus was still in Asia 140,000 years ago, although there’s some evidence they hung on until much later. And all of this raises a question: did modern humans intermingle with their hominin cousins earlier and more often than scientists thought?

Artifacts from Madjedbebe push back the date of human occupation in Australia from roughly 47,000 years to possibly 65,000. Video courtesy of Gundjeihmi Aboriginal Corporation

Excavations at Madjedbebe, dating to the 1970s, have long sparked controversy. In the 1980s, archaeologists dated sand grains from the site using a technique called thermoluminescence and found there were artifacts in sediment layers dating to 60,000 years ago, but the margin of error for those dates was so great that the site could have been much younger. But 30 years of technological progress has given geochronologists more precise dating tools. Jacobs used a technique called optically stimulated luminescence (OSL) to measure when individual grains of sand had last been exposed to sunlight. Knowing that the dates would be contentious, the geochronologist took dozens of samples from across the site, and even conducted a blind test by having a second geochronologist rerun her OSL analysis. Those samples returned dates from an artifact-bearing layer that ranged from about 65,000 to roughly 52,000 years ago.

The artifacts themselves are a bit surprising. They include ground-stone axes that were hafted to wooden handles, and also stones that were used for grinding seeds of plants that can be found in the area today.

“It’s very rare to find these kinds of technologies at this period anywhere in the world,” says Ben Marwick an archaeologist from the University of Washington and a member of the team. During this period, humans mostly made stone tools by flaking rather than grinding.

The team also found a large number of ocher “crayons” that were used for making yellow and red paints. Today, ocher is still used by aboriginal people to make rock art. Mica embedded in the ocher created a reflective pigment. Clearly, the people of Madjedbebe were not an earlier species of hominin. The artifacts show they were using the full array of modern human behaviors.

Researchers retrieved thousands of artifacts from Madjedbebe that suggest the people were modern humans. Video courtesy of Gundjeihmi Aboriginal Corporation

The new dates for Madjedbebe raise important questions about the extinction of Australia’s megafauna. Many scientists have suggested that the earliest humans on the continent wiped out dozens of species through overhunting, including marsupial lions and the giant short-faced kangaroo. But the new dates place humans in Australia nearly 20,000 years before the megafauna extinction.

James O’Connell, a professor emeritus at the University of Utah who is not a member of the team, is skeptical of the new dates, although he admits that he has not reviewed the new findings in depth. O’Connell suspects that the artifacts became mixed with older sand grains, which would make the human occupation at Madjedbebe appear to be earlier than it is.

In O’Connell’s view, the settlement of Australia likely took place around 47,000 years ago, a date that fits nicely with mitochondrial DNA evidence that shows aboriginal Australians descend from a population that settled the continent roughly 50,000 years ago.

All routes to Australia lead through Southeast Asia, and the migrants would have had to take watercraft over ocean crossings. O’Connell estimates that the trip may have taken four to seven days, and that a founding population would have needed at least 60 people, which means the boats had to carry water and supplies for that many colonists. Jacobs, on the other hand, believes the trip may have been less daunting. Sea levels were lower than they are today, which may have made the islands between Indonesia and Australia visible to each other. The trip may have been a series of hops between islands. 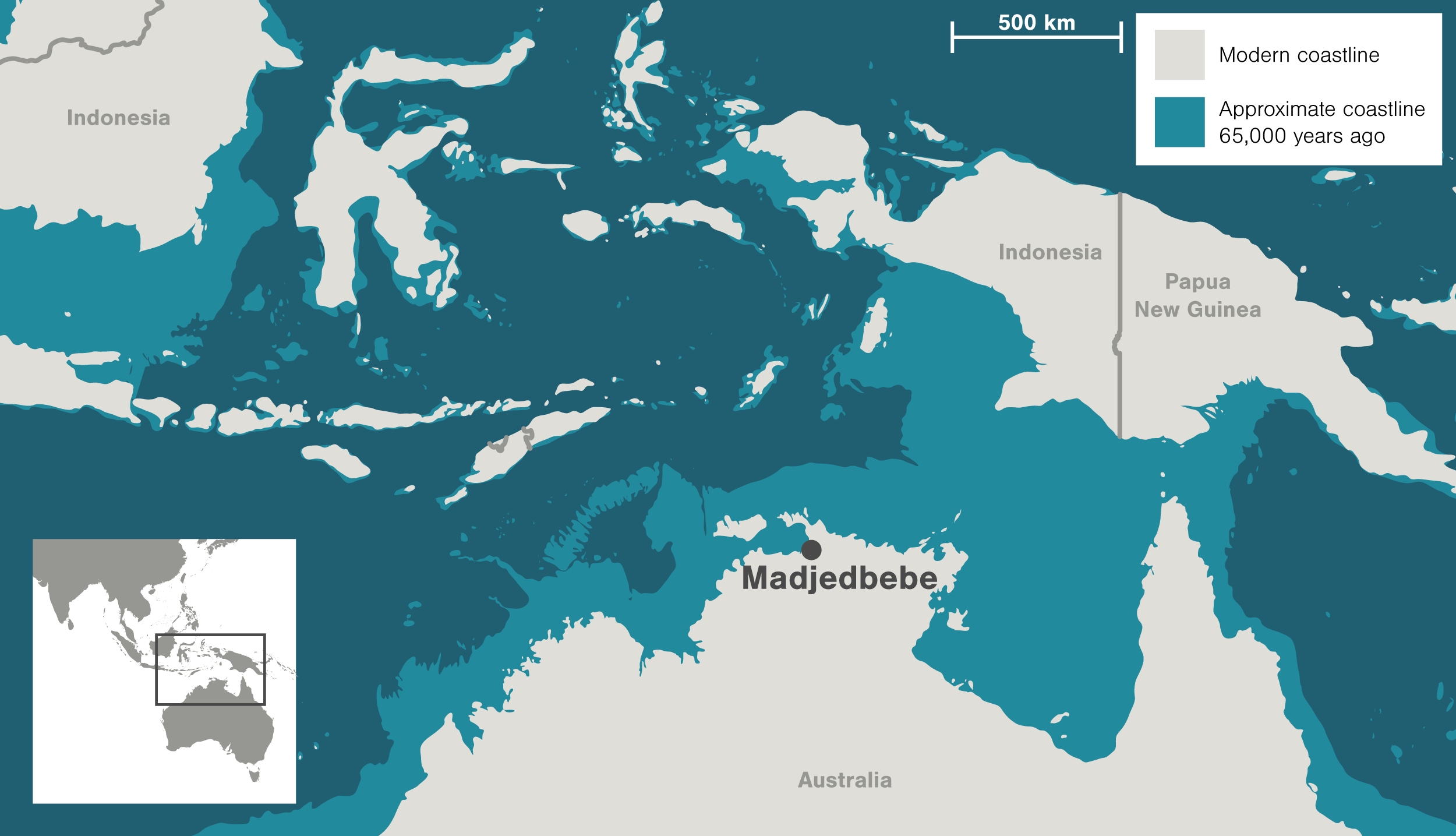 Jon Erlandson, an archaeologist at the University of Oregon and an expert on human migration patterns, thinks that the new dates from Madjedbebe fit with models that put the date of modern human migration out of Africa around 70,000 years ago. Our modern human ancestors, he says, may have moved relatively quickly following the South Asian coast along what he calls “the mangrove highway,” and developed boats to exploit those coastal environments. From there, it would not have been a big leap to building boats that could cross the ocean to Australia.

Erlandson is generally impressed with the archaeology being done at Madjedbebe. “This is good, solid work, but it won’t end the debate about when people first got to Australia,” he says. “It may enliven that debate.”