This denizen of the deep is just one of the spectacular watercolor paintings found in Adriaen Coenen’s 16th-century Visboek (Fish Book). Photo courtesy of World Digital Library

Adriaen Coenen was born in 1514 in the small Dutch fishing town of Scheveningen, where life was all about the sea: fishermen brought in their catch, villagers ate it, and life went on. But beyond the town’s limits, Europe was caught up in the High Renaissance. Michelangelo had just illustrated the world’s divine origins on the ceiling of the Sistine Chapel, and Leonardo da Vinci had sketched the proportions of the human body. It was a time of booming exploration, too. Christopher Columbus had landed in Haiti, and Ferdinand Magellan was preparing to sail around the world for the first time. Art and science were changing the world, and even Scheveningen was swept up in the wave.

Coenen was a fisherman, but also served as the town sheriff, fish auctioneer, and even the country’s wreck master for a time, which meant he was in charge of the debris that washed ashore after shipwrecks. Living and working by the sea—often seeing its creatures firsthand—fueled Coenen’s passion for the natural world and spurred him to become a Renaissance man in his own right. Fascinated by the fishes and other sea creatures that he saw living or dead—or heard about in the tales (tall and otherwise) of others—he collected specimens and meticulously cataloged his findings in text and art. Coenen also contacted eminent scientists to borrow books and texts on marine life.

The result was Visboek (Fish Book), a 410-page handwritten and illustrated encyclopedia of the world’s fishes, whales, and assorted creatures of the deep. Remarkably, he began the project at age 63, and it took three years to complete. Although he was not a professional artist, Coenen studied and worked with fishes all his life and filled the book with evocative and detailed drawings. Lush watercolors show creatures from the quotidian (herring, whales) to the spectacular (large beached whales painted in watery black) to the downright fanciful (beasts with multiple heads).

Coenen knew he’d created something of value. At one of Scheveningen’s annual fairs, he charged visitors one duit coin to see his collection of dried fish, but two to leaf through the fish book. Coenen later drew a similar book all about whales, with the same artistic beauty, but less fantastical variety. Today, the curious can see the Visboek for free online, courtesy of the World Digital Library and the National Library of the Netherlands. 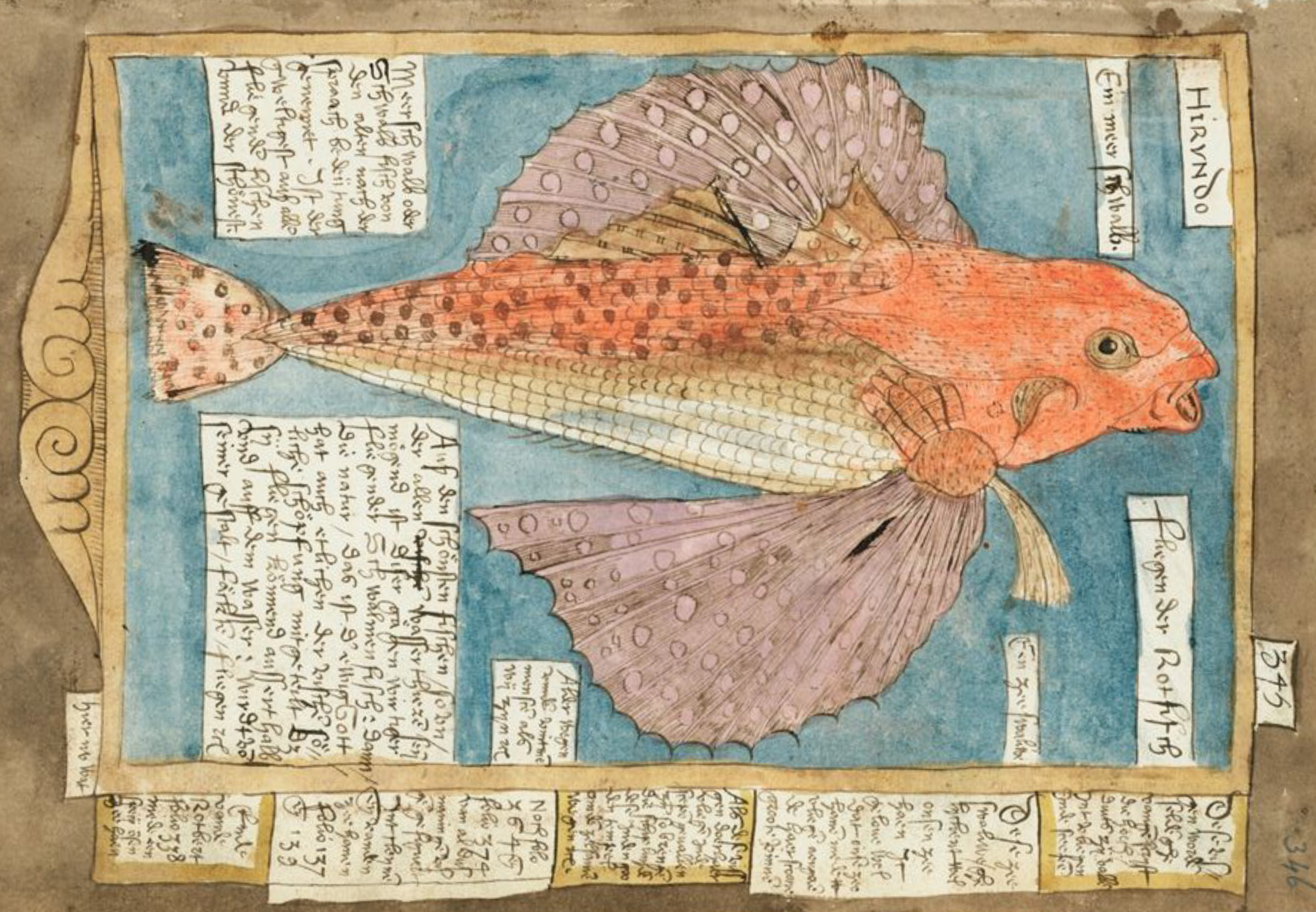 The Visboek as a natural history compendium is not unique. The human urge to document all the animals in the world goes back to at least Aristotle, who authored Historia animalium (History of Animals). During the Renaissance, science and exploration revealed new lands and species to Europeans, and comprehensive natural histories such as Conrad Gessner’s Historia animalium or Edward Topsell’s The History of Four-footed Beasts and Serpents became popular.

In Holland, herring was an important catch—so much so that Coenen refers to the fish as “our big golden mountain in Holland.” Coenen, a true a-fish-ionado, organized the Visboek by the species’ usefulness and devotes several full pages near the book’s beginning to den haring, the humble herring. 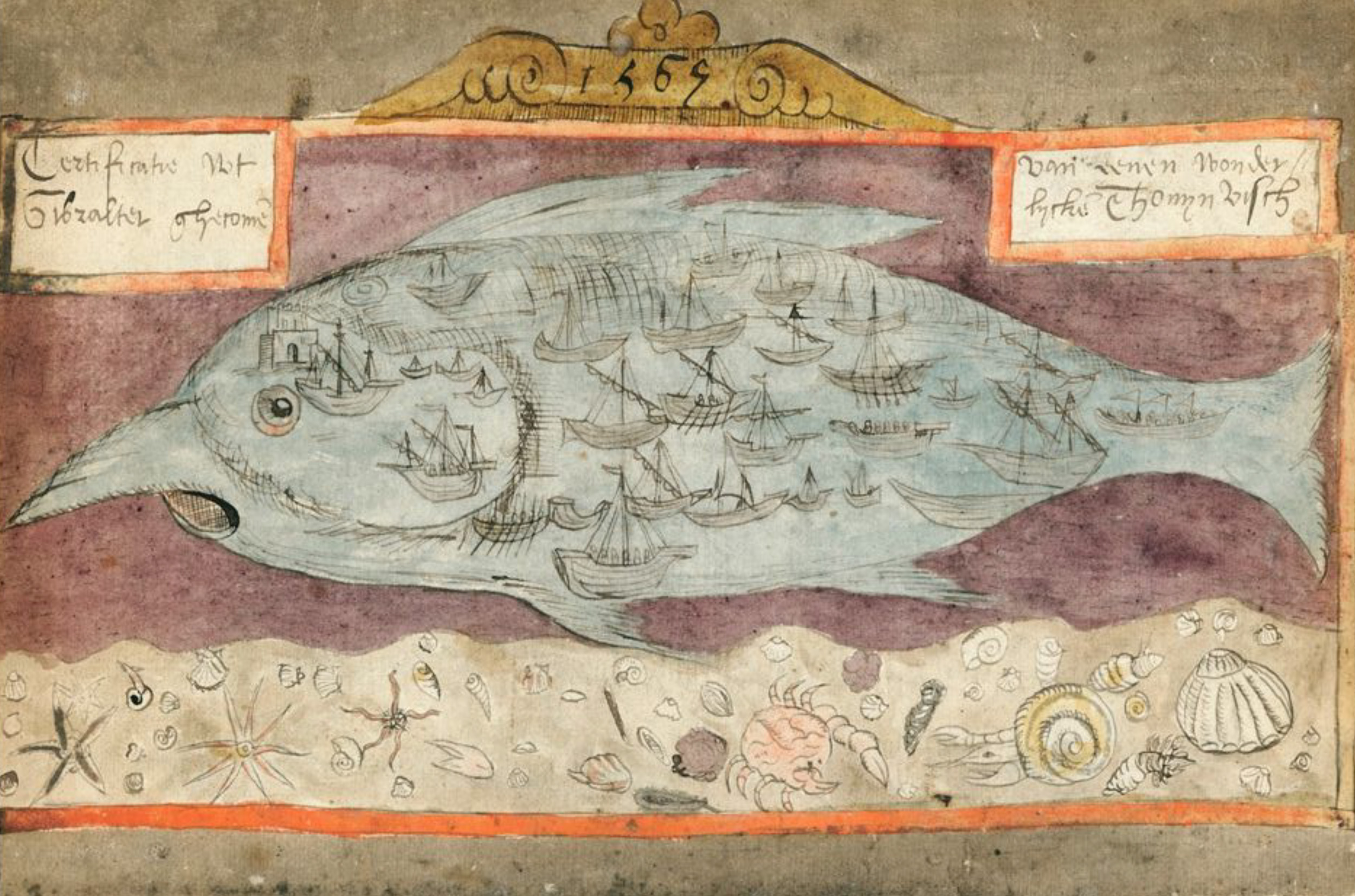 Many drawings in Visboek straddle the realistic and the fantastic. The fish illustrated here is likely a tuna species also called the tunny, which has black markings on its upper back that resemble finely sketched lines. In this image, Coenen illustrates the story of a tunny caught in the Mediterranean Sea; its markings depict ships Coenen imagined the fish had seen on its travels. 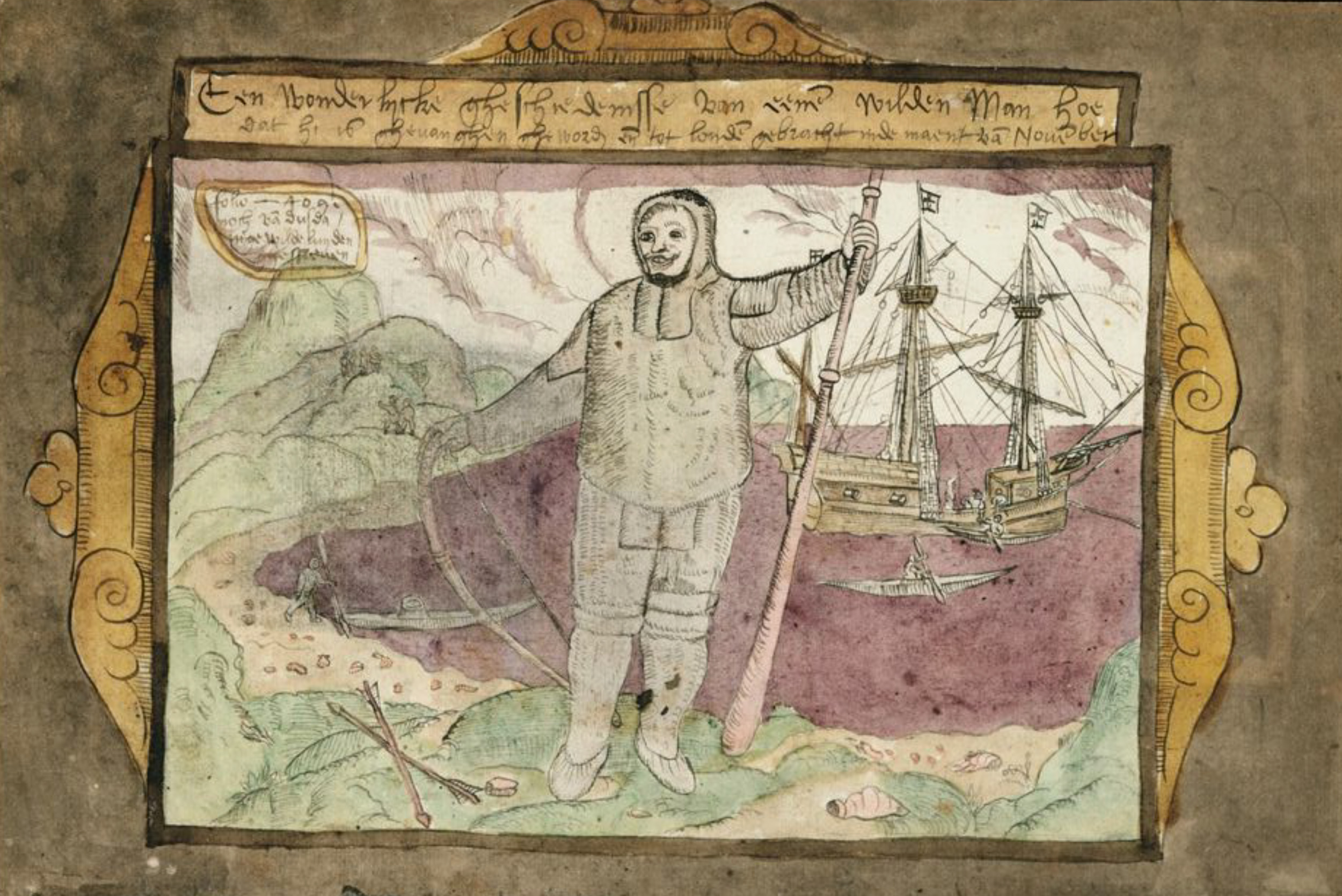 Coenen lived at a time when a particularly cruel practice had begun: publicly displaying indigenous people who had been kidnapped or lured away from their homes by European explorers. This man, whose name is unknown, is thought to be an Inuit captured by Captain Martin Frobisher in 1576. The man died after only two weeks in London, but several people drew portraits of him during that time and Coenen likely adapted one of them to create his own drawing, complete with kayak and dramatization of the abduction. 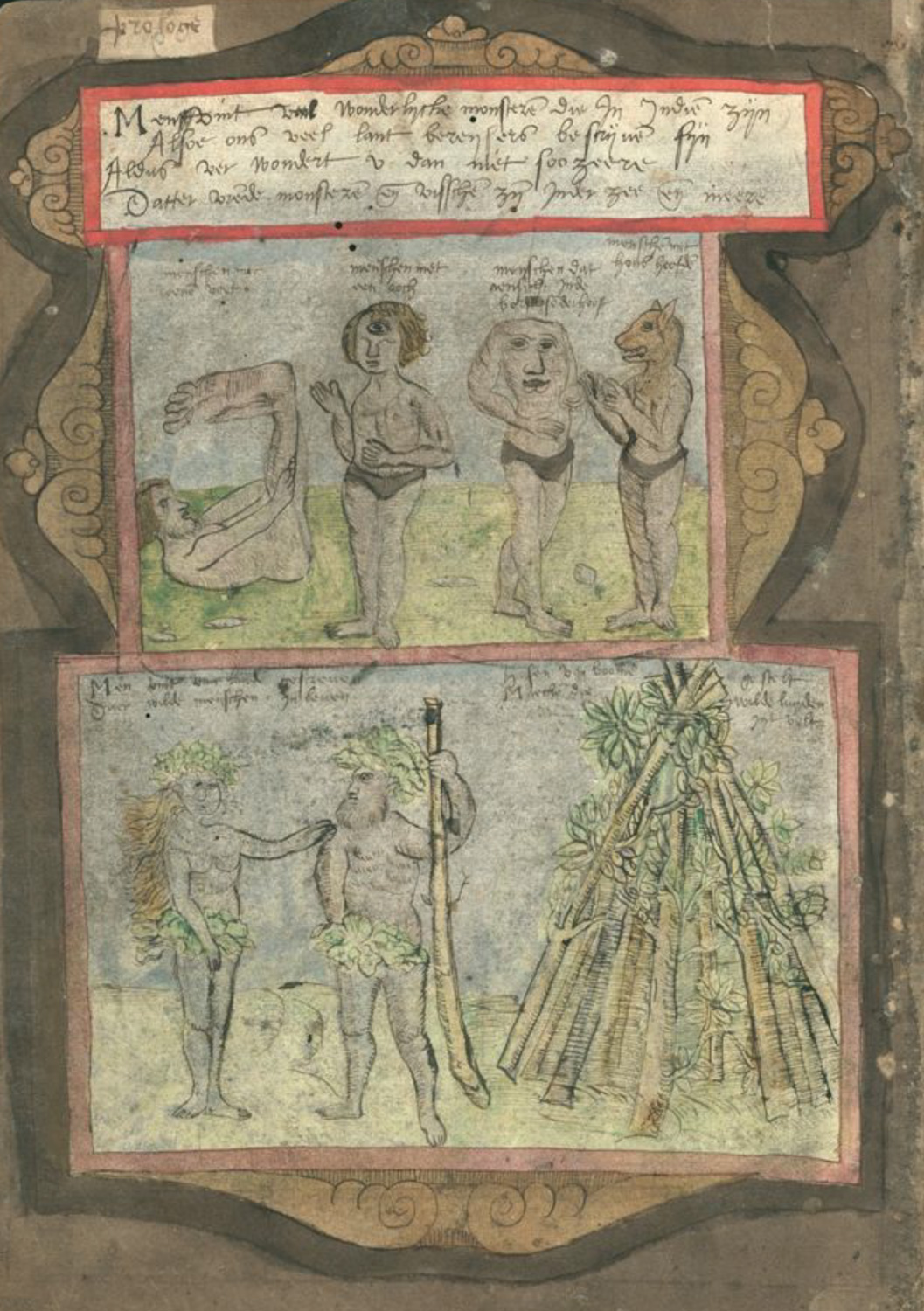 Coenen’s most fantastical drawings are based on stories of distant peoples found in earlier natural histories. Some stories include “monopods,” a mythological race of one-legged people reputed to live in the shadow of their own huge feet, and who appear in earlier Greek, Roman, and medieval writings.

Coenen’s work reflects the biases and misinformation of his time, but, for a man who made his living from the sea, this labor of love was a Renaissance masterpiece as epic as any church ceiling.