Fishers in Ulukhaktok and five other Inuvialuit villages in the western Canadian Arctic have reported an influx of Pacific salmon, which were once scarce in the region. Photo by Ian Hogg/Alamy Stock Photo

The first time Jody ​​Illasiak saw a salmon in one of his fishing nets was in 2017. He and a close friend were aboard a 5.5-meter Lund boat, searching for Arctic char near Lessard Creek, a well-known fishing spot near Paulatuk, Northwest Territories, when Illasiak’s friend pulled up the unfamiliar fish.

Two years later, Pacific salmon were everywhere across the Inuvialuit Settlement Region (ISR) in the western Canadian Arctic, an area that includes Paulatuk and five other communities and where the species were once scarce. “That was the craziest year for salmon in our area,” says ​​Illasiak, who is a member of the Paulatuk Hunters and Trappers Committee.

In other parts of the world, a sudden influx of salmon might be cause for celebration, but for the ISR communities, the fish pose problems. Their arrival is a sign of how much climate change is altering the marine environment in the western Arctic—and how much the Inuvialuit will have to adapt to maintain their culture and ways of life.

In a 2021 study, Zander Chila, a graduate student at the University of Victoria in British Columbia, delved into the firsthand knowledge of fishers from across the region, confirming that more and more Inuvialuit are catching more and more salmon. Chila and his coauthors combined accounts from more than 50 interviews with 20-plus years of voluntary harvest data from the Arctic Salmon Project, a collaboration between Fisheries and Oceans Canada (DFO) and local hunters and trappers’ organizations, to track the numbers through time.

Fishers in the more westerly communities, located around the Mackenzie River delta, have been catching salmon on and off for more than 60 years—likely chum salmon returning to the Mackenzie River to spawn. But the eastern communities rarely caught salmon before 1990. In the mid-1990s, ISR salmon harvests—of mostly chum and pink—began to rise as fish from booming Pacific Ocean populations strayed into the Arctic. In recent years, fishers in the ISR, on Alaska’s North Slope, and in the eastern Canadian Arctic, are continuing to catch greater numbers of salmon, even though Pacific Ocean populations have declined. 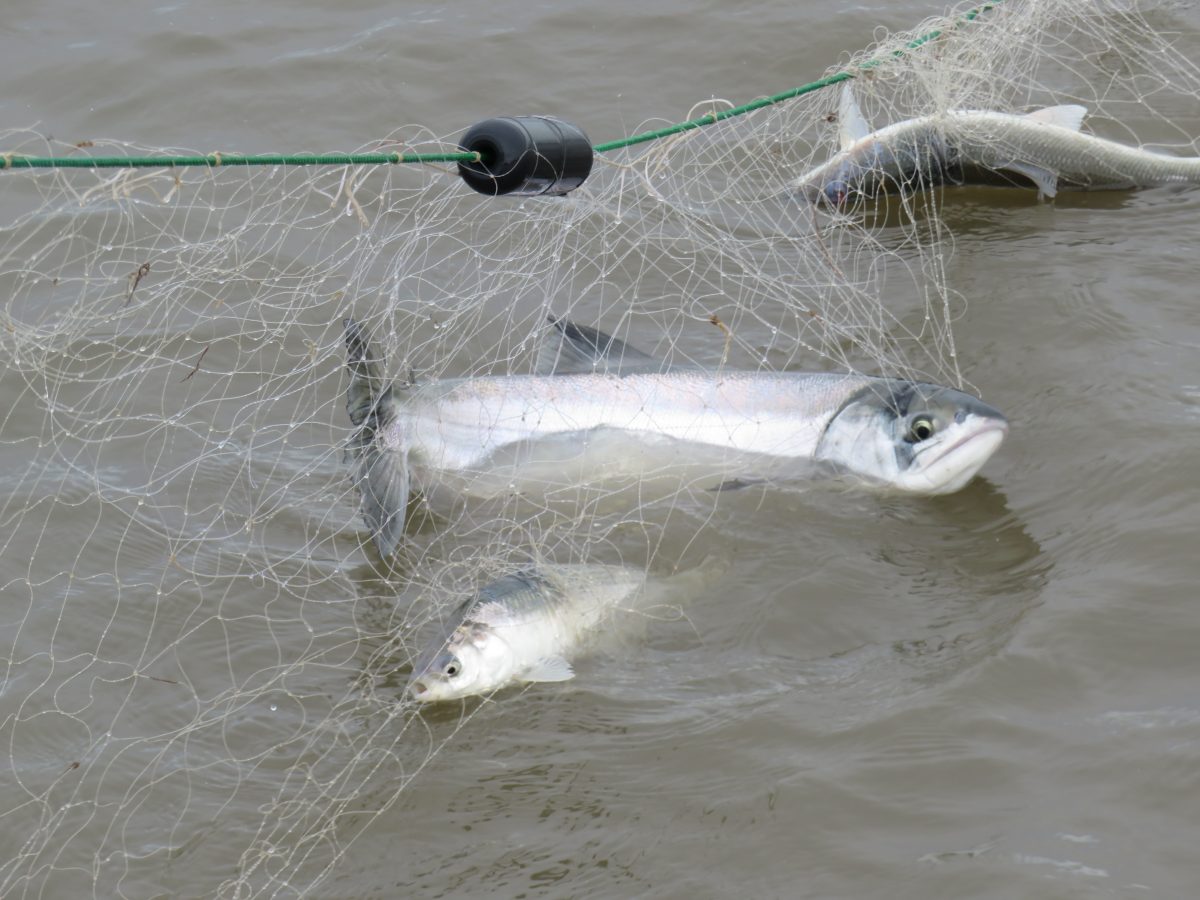 Fishers across the Inuvialuit Settlement Region in the western Canadian Arctic are turning up Pacific salmon in nets set for iqalukpik (Arctic char), anaakłiq (broad whitefish), and other traditional foods. Photo courtesy of Colin Gallagher

Although scientists aren’t sure what precise impacts these fish might have on Arctic ecology, Chila says the salmon’s growing prevalence is cause for concern. In particular, salmon may interact with species that the Inuvialuit rely on, including iqalukpik (Arctic char), anaakłiq (broad whitefish), Dolly Varden, and trout. For instance, salmon might compete for food or carry novel parasites that could harm char. By disrupting these traditional foods, salmon stands to negatively affect Inuvialuit culture and community life—a fear expressed by all of the fishers that Chila’s team interviewed.

But the harvesters also stressed their communities’ ability to adapt. Although Inuvialuit fishers do not target salmon, many who net the fish incidentally have put them to use. About half of interviewees had eaten the fish they caught and several shared their catch with community members. Even among those who are open to eating salmon, though, few know how to prepare it. In response, the Arctic Salmon Project created a cookbook in 2020 to share recipes for jerky, battered steaks, quiche, and Thai chowder.

Not everyone is ready to taste salmon, however. In Paulatuk, where salmon have begun showing up most recently, only one interviewee had eaten their catch. All others had returned the fish to the Arctic Salmon Project in exchange for gift cards to the grocery store.

“Basically, we’ve got no use for them,” says Illasiak.

Right now, the most pressing question for Inuvialuit across the ISR is how to get salmon out of the region and prevent the fish from gaining a permanent foothold in char habitat. A challenge is that the communities follow both traditional values and governmental laws, which stress not wasting anything harvested. “If it’s a species that we’re not targeting, how do we prevent [salmon spawning] from happening without breaking the law?” asks J. D. Storr, a member of the Aklavik Hunters and Trappers Committee.

In early October, Illasiak hit upon a possible solution. He was in Vancouver, British Columbia, with Storr and DFO research scientist Karen Dunmall, who helms the Arctic Salmon Project, to present at the International Year of the Salmon symposium on the growing presence of salmon in the ISR. The trio met people from Indigenous communities along the West Coast of the United States and Canada, whose local salmon populations have declined for decades. During one conversation, Illasiak proposed catching salmon in the Arctic and shipping the fish to the West Coast.

While Illasiak admits that the community members were a little taken aback at first, he believes interest may be there, despite the logistical challenges. As the Inuvialuit adapt to the influx of salmon, Illasiak’s idea, which finds a good use for the salmon by sharing abundance with communities in need, may be worth exploring.

In the meantime, though, communities in the ISR are working with the Arctic Salmon Project to learn how to make use of the salmon swimming into their region. Even with all of the uncertainties the fish represent, many of the Inuvialuit harvesters interviewed are optimistic that they will find a way to adapt.