Alia Al-Haj, with the Smithsonian Environmental Research Center, is testing how sea level rise and warming affect the microbes that dwell in tidal marsh sediments. Photo by Christian Elliott

Alia Al-Haj strides down the half-kilometer boardwalk, a wagon full of power tools and PVC pipes in tow. Off to each side, a vast marsh stretches into the distance, the wet ground punctuated by tall sedges waving in the cool spring breeze. Al-Haj closes her eyes and takes in a deep breath of the salty, sulfury aroma.

“It’s really important to me being able to smell the marsh,” she says. “I know it may not always be there. That smell is something I think about a lot, how much I’ll miss it.”

For the past 35 years, scientists with the Smithsonian Environmental Research Center, including Al-Haj, have been coming here to the Global Change Research Wetland in coastal Maryland to conduct extensive long-term research. The scientists have turned the tidal marsh off the Chesapeake Bay into a giant experimental laboratory designed to simulate how marshes might respond to climate conditions decades into the future.

Tidal salt marshes are coastal guardians. They filter runoff, protect the shore against storm surges, and shelter wildlife. On a grander scale, they are incredibly effective buffers against climate change. Tidal marshes sequester carbon at a rate 10 times higher than even mature tropical rainforests.

Land development has already stripped the world of half its salt marshes. Along the US East Coast there’s an ongoing push to restore these rare, service-rich ecosystems. But with sea level rise, severe storms, and warming temperatures, scientists are concerned salt marshes could wash away entirely. About 1,500 square kilometers has disappeared in just the past 20 years, according to new NASA research. Globally, that loss of carbon storage is equivalent to the annual emissions of 3.5 million vehicles.

Short of their outright disappearance, there’s a chance the marshes could unpredictably flip from carbon sinks to net carbon emitters, causing a measurable shift in the carbon balance of the world. That’s where Al-Haj’s experiment comes in.

At the end of the boardwalk, Al-Haj unloads the wagon. Here and at a nearby freshwater marsh she’s building “marsh organs”: a series of sedges planted in white PVC piping that she submerges in the marsh at different elevations in an attempt to simulate future scenarios of sea level rise. Sitting in the marsh water, they look like very lost pipe organs. To simulate warming, the pipes have heating elements that maintain a constant temperature 6 °C above the ambient air. Nearby, other odd infrastructure covers the marsh, such as the octagonal plastic igloos pumped full of carbon dioxide to test the effects of elevated emissions.

In tidal marshes, sedges suck carbon dioxide out of the atmosphere and preserve it underground in the form of dead root material. But when microbes decompose the material under low oxygen conditions, they can emit methane and other greenhouse gases. Exactly which gases get produced depends on a number of factors.

The funky, salty smell permeating the air is from hydrogen sulfide gas, Al-Haj explains. That the odorous gas is so prevalent is a good sign. It means that in the submerged sediment beneath the boardwalk, microbes that consume sulfate—a component of seawater—are outcompeting other microbes that produce methane.

“It’s like a schoolyard battle, or a war for resources,” Al-Haj says. “We don’t think about it, we can’t see it, but we can measure the amount of methane and carbon dioxide coming out, so we can get at the outcomes of those battles.”

For now, in this marsh, the sulfate-consumers are winning. But if the methane producers take over, the outcome of this microscopic battle has the potential to change the makeup of the atmosphere.

A few months after installing the marsh organs, Al-Haj’s results are in. Compared with the nearby freshwater marsh site, where methane-producing microbes have free rein, the experimental salt marsh is producing 50 times less methane. 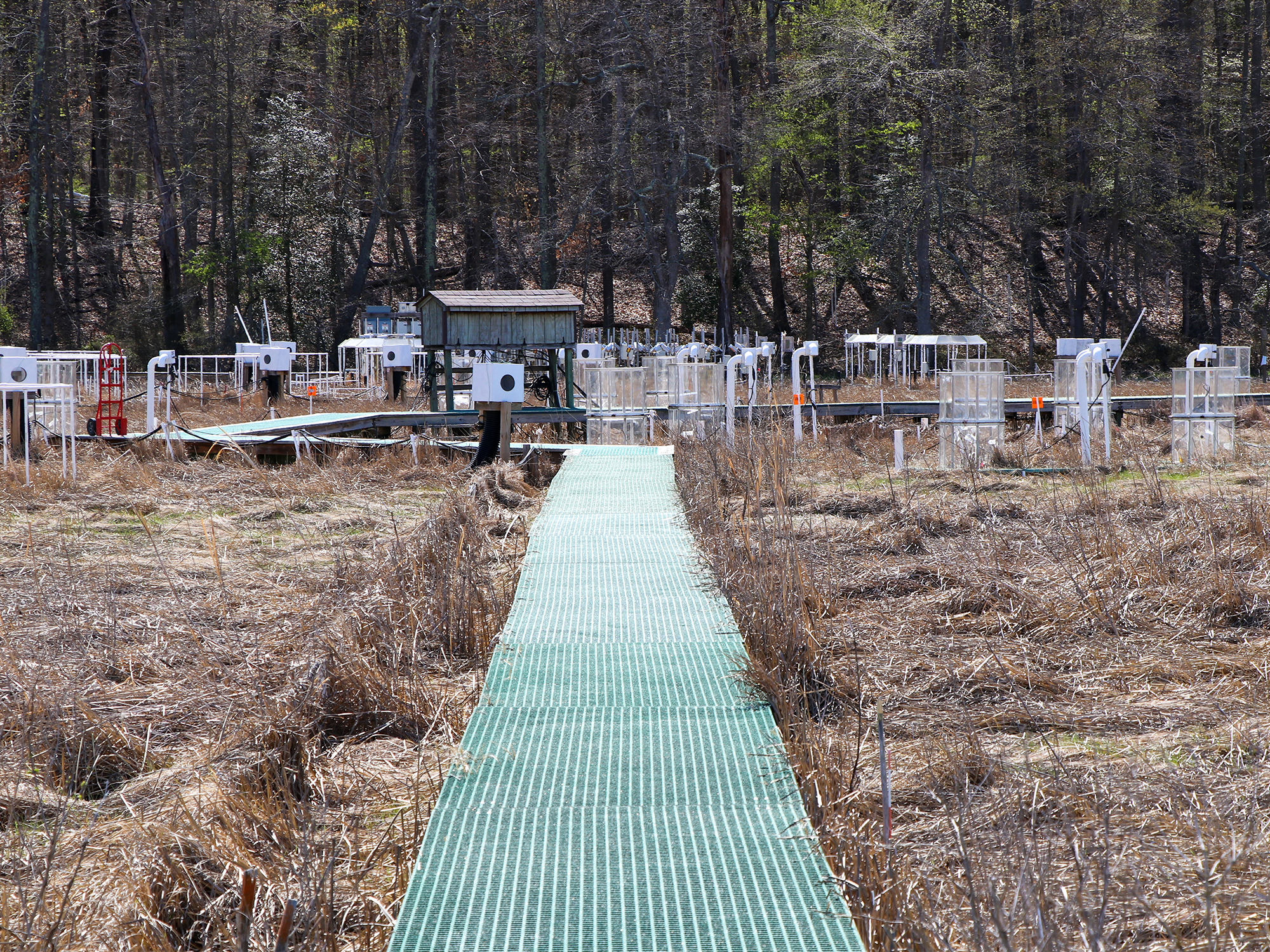 A range of experiments at the Global Change Research Wetland in coastal Maryland is giving scientists a look at how climate change could affect tidal marsh ecosystems. Photo by Christian Elliott

That squares with similar research being done by Kevin Kroeger, a biogeochemist with the United States Geological Survey’s Woods Hole Coastal and Marine Science Center in Massachusetts who was not involved in Al-Haj’s work. In experiments in tidal wetlands near Cape Cod, Kroeger found that tidal wetlands cut off from seawater freshen, resulting in more methane production.

Under Kroeger’s guidance, the National Park Service is currently converting dikes to bridges to let seawater back into former marshland at the Cape Cod National Seashore—a bid to undo this freshening, restore the wetlands, and prevent future methane emissions.

“We have solid evidence now that tidal restriction, building structures across the tidal landscape, drives changes in salinity,” Kroeger says, which ultimately contributes to carbon emissions.

There’s a limit, though, to how much we can avoid marshland methane emissions. As Al-Haj’s experiments have shown, higher soil temperatures mean more methane production across the board. Sea level rise also causes higher methane emissions because the more time a marsh spends underwater, the more time methane-producing microbes spend in low-oxygen conditions where they can consume soil carbon and emit methane.

Al-Haj will continue her experiments over the winter to see how more frequent freeze-thaw cycles can affect emissions. So far, her data suggests that, at least over the next 20 years, salt marshes should remain carbon sinks. But as climate change progresses, they won’t be able to offset as much carbon as they do now.

Many other factors affect marsh methane emissions and threaten to throw off that prediction. For instance, nitrogen runoff and the presence of invasive grasses can upend the math. But at this point, Kroeger says, restoring former tidal marshes is the right move.

“The negative outcomes of not restoring these ecosystems can include total loss, and in specific locations, the emission of that old, stored carbon back into the atmosphere. If you’re asking whether there’s a potential carbon bomb scenario, that would be it,” he says.

Restoration efforts have to happen sooner rather than later, Kroeger says, to give marshes time to build up enough elevation to withstand sea level rise.

For her part, Al-Haj feels hopeful. “There’s a big movement to restore marshes right now, which is great,” she says.

“But we also know with sea levels rising, marshes need room to migrate landward, and in a lot of places, they don’t have that room. I’m expecting we will lose a good amount of marshes on the East Coast. With that, the outlook is a little more bleak.”