Salmon makes up a substantial part of the diet of grizzly bears living near Rivers Inlet, British Columbia. Photo by John E. Marriott

Twenty-two years after at least 15 salmon-starved grizzlies were shot to protect residents of a small Indigenous village on British Columbia’s central coast, that same First Nation is preparing to prioritize the bears’ claim to the fish. The Wuikinuxv Nation is willing to reduce its own catch of wild Pacific sockeye from Rivers Inlet to provide more for grizzlies during an age of reduced spawning returns.

“In this era of low fish abundance, how do we take care of bears?” says Megan Adams, a Raincoast Conservation Foundation researcher and lead author of a new study, supported in part by the Hakai Institute,* designed to determine how to achieve peaceful coexistence with bears by sharing the salmon harvest. “If people can compromise their catch by 10 percent … bear population density can increase by 10 percent,” she says.

The fjord of Rivers Inlet boasted annual returns of up to 3.1 million sockeye from 1948 to 1992. It was the third-largest run in the province, with more than enough fish to support commercial and Indigenous food/ceremonial fisheries, and to see grizzly bears through their winter hibernation.

Squeezed by factors such as historical overfishing, myriad changes in the ocean, diminished spawning habitat due to logging, and receding glaciers—which result in warmer temperatures in spawning tributaries—salmon returns dropped off dramatically starting in 1993. They hit rock bottom in the fall of 1999, when fewer than 10,000 sockeye showed up at the Wuikinuxv village of ‘Kìtit about 400 kilometers northwest of Vancouver along the Waanukv River.

Emaciated grizzlies desperately wandered the streets, prowled around homes for scraps, rummaged through garbage, and put frightened residents on high alert. “They were starving,” recalls Jennifer Walkus, a study coauthor and an elected councilor with the Wuikinuxv Nation.

The toll of grizzlies shot that season as a threat to humans included an adult female that “just had no energy left and was put down with her cubs,” Walkus says.

The grizzly bear is featured in Wuikinuxv culture, including as crests on houses, ceremonial poles, and other items, and in dances handed down by families over generations. “It was one of the hardest things that the village had to go through,” Walkus says.

The Wuikinuxv Nation responded with a plan to reduce bear-human conflicts by removing attractants that might otherwise draw bears into the village: residential garbage is collected door-to-door three times a week during the salmon season rather than left outside, and the entrails of human-caught salmon go back into the river, Walkus says.

But the move to voluntarily reduce their salmon harvest is the latest and most ambitious initiative by the Wuikinuxv to help the bears and keep the community safe.

“There is an incredible awareness—almost an accountability to bears,” says Adams, who conducted the study for her doctoral thesis at the University of Victoria in British Columbia.

Adams’s research explored how much salmon the bears would need, and how much catch the Wuikinuxv would need to give up to make that available.

To determine the bears’ needs, Adams and her colleagues analyzed hair samples from 51 bears, using stable isotope analysis to calculate the proportion of salmon in their annual diet. They found that from 2013 to 2017, salmon represented about 63 percent. 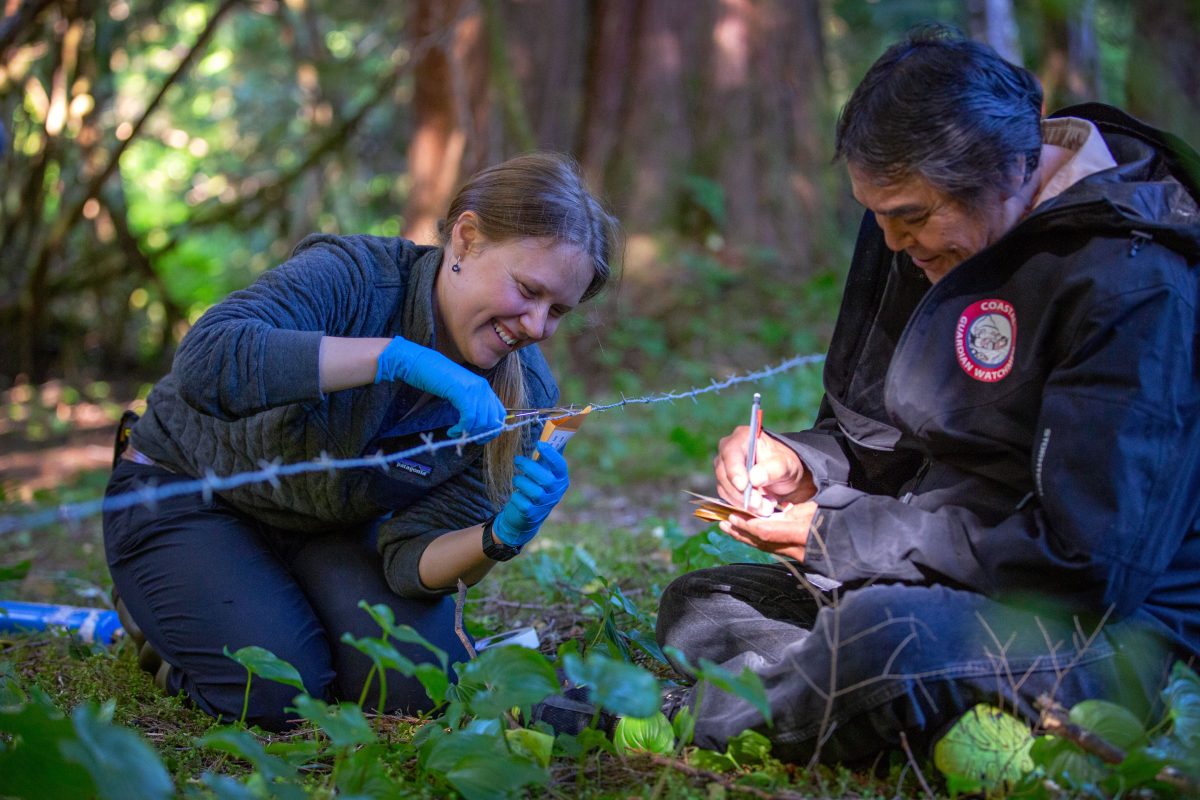 Raincoast Conservation Foundation researcher Megan Adams studied how much salmon the grizzly bears near Rivers Inlet, British Columbia, would need to thrive. Seen here with Patrick Johnson, a member of the Coastal Guardian Watchmen, the two were collecting bear hair samples near a Wuikinuxv village. Photo by Grant Callegari

To estimate the number of salmon passing through the Waanukv River, the Wuikinuxv use underwater sonar scanners as well as conduct test catches from boats.

Since the 1990s, sockeye returns have averaged about 250,000 annually. Adams and her colleagues calculated that if the community harvests about 45,000 fish, that still leaves adequate salmon for the bears.

The Wuikinuxv Nation currently does not harvest at that rate—annual catches are less than one percent of the return. But if stocks rebuild and one day a commercial fishery is reintroduced, that could tip the balance against the bears. By doing its research now, the community can push to implement the precautionary principle on future harvest levels. “The nation wants to be ready to advocate not only for themselves but also for wildlife,” Adams says.

Jonathan Moore, an aquatic ecologist at Simon Fraser University in British Columbia who did not participate in the study, says the research is consistent with both Canada’s reconciliation initiatives and Wild Salmon Policy, which recognizes that salmon “play a key role in natural ecosystems, nourishing a complex web of interconnected species.”

He says the study is important for looking not just at salmon populations but “salmon systems,” and their wider importance to both humans and wildlife. “It is a system that has totally changed over the decades,” he says. “Bears and people still need fish.”

The Wuikinuxv principle of n̓àn̓akila means to watch over someone as a guardian or protector. For grizzlies, it also means a bellyful of salmon before a long winter’s rest.