Sea lamprey can live in both salty and fresh water. They invaded the Great Lakes more than a century ago and have been a management challenge ever since. Photo by Wil Meinderts/Minden Pictures

The sea lamprey, an anadromous fish that looks like an eel with a garbage disposal where its mouth should be, first hit the list of most wanted invasive species in the 1860s. Renovated shipping canals gave the sizable parasites access to the Great Lakes, where they found plenty of food, near-unlimited spawning habitat, and no natural predators. By their peak in the 1950s, sea lamprey were killing 45,000 tonnes of lake fish per year—five times the commercial catch in the region at the time.

“The fishery collapsed and that really opened everyone’s eyes,” says Cory O. Brant, a postdoctoral researcher at the University of Michigan who studies sea lamprey impacts on the Great Lakes. With dead fish piling up by the hundreds of millions, First Nations and wildlife officials across eight US states and the province of Ontario rallied to find a solution. “Everyone came together to say, maybe for the first time ever, that invasive species like sea lamprey could be really bad.”

Out in the ocean, sea lamprey aren’t a problem because they rarely kill their hosts. The pilfering hitchhikers use rings of hooked teeth and a raspy tongue to slurp blood and tissue from hardy prey like tuna and swordfish. In the Great Lakes, however, lake trout and other native species never evolved to handle such hefty tagalongs. So when sea lamprey showed up, fish began washing ashore looking like Swiss cheese.

For conservation managers, driving the invaders out of the Great Lakes is an unending challenge. Each female that sneaks into the system can lay up to 100,000 eggs, so the chances of catching every last fish is essentially zero. Since 1958, chemical treatments, barriers, and traps have kept sea lamprey numbers from once again soaring to catastrophic levels. But a new addition to the arsenal may open a new frontier in the fight.

A team of scientists recently discovered that a fatty acid chemical produced by lamprey larvae acts as a pheromone—a chemical beacon—that summons passing adults. Like an olfactory pied piper, biologists could deliberately release the signature scent to trick migrating lamprey into following the trail out of town or into traps.

After hatching, lamprey hide in mucky streams for several years. These larvae are harmless filter feeders, but the scent they release influences the behavior of their more destructive senior counterparts. The fatty acid sends a clear message: sex worked well here; this is a good river to swim up. 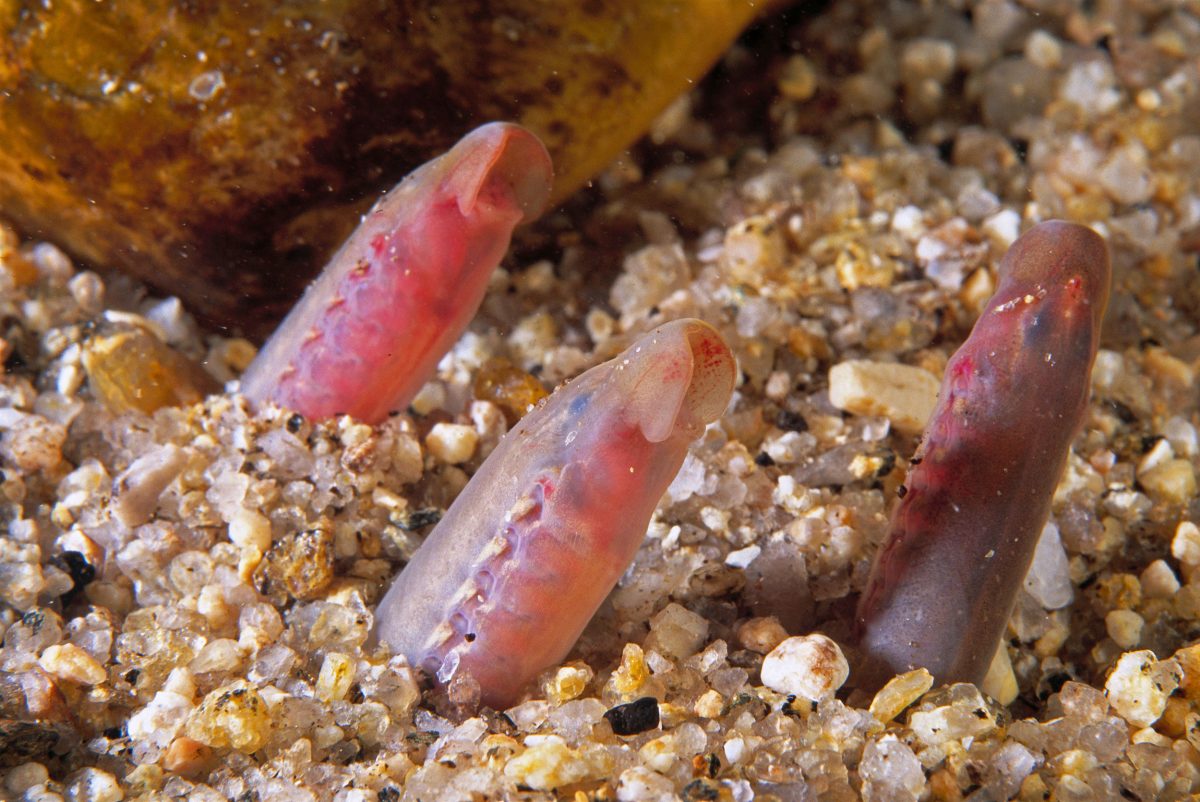 Juvenile sea lamprey release a chemical that attracts migrating adults. By their very presence, the juveniles indicate that the area is viable spawning habitat. Photo by Age Fotostock/Alamy Stock Photo

“Their sense of smell is amazing,” says Brant. A tiny pinch of the fatty acid is all it takes to lure the lamprey. Even an amount the size of a grain of salt, mixed with 110 liters of water and pumped into a river over hours, attracted migrating adults during field tests, explains Brant.

“That crazy mouth is eye-catching, but sea lamprey are all nose in the front,” says Brant. If your sniffer were as prominent as a sea lamprey’s, it would be about the size of your fist.

The idea that baby lamprey may be luring adults first arose in the 1980s, years after conservation managers started using lampricide to kill sea lamprey in the Great Lakes. The poison, which remains the workhorse of the control program, only targets larval sea lamprey. Researchers observed that when the larvae were killed, fewer adults showed up the following year.

Using synthetic pheromones to redirect the lamprey away won’t be a replacement for lampricide, says Marc Gaden, a spokesperson for the Great Lakes Fishery Commission, but there would be benefits to one day using both approaches. “This work is innovative and gets us excited,” he says. “It gives us another tool to protect the future of the lakes, which means we may be able to rely less on one technique.”

Though lampricide is fairly targeted, it can affect other animals such as aquatic insects and the lakes’ native lamprey, smaller cousins of sea lamprey that pose no grand ecological threat. So, pheromone lures could help avoid overlap by drawing the seafaring lamprey away from areas that harbor sensitive species prior to the application of lampricide. Alternating between lures and lampricide could also reduce the likelihood that lamprey become resistant to chemical treatments.

“We have a really great tool with lampricide,” says Nicholas Johnson, an ecologist at the US Geological Survey Great Lakes Science Center in Ann Arbor, Michigan. “But we have to be careful not to overuse it.”

Deciphering this smelly cue isn’t only about trapping and killing, says Brant. The pheromone work has serious conservation potential, too.

Outside of the Great Lakes “these animals are desirable and in decline,” notes Johnson. Sea lamprey are an important food source to people in Europe, and their threatened Pacific cousins are valued by communities on the west coast of North America. By directing adults into desirable habitats, up fish ladders, or around barriers, the same lures used to kill lamprey in the Great Lakes could help restore them throughout their native ranges.