Juvenile chinook salmon in California must overcome hurdles to reach the ocean, including rivers that have been diverted for human use. Photo by Kimberly White/Corbis via Getty Images

Life is perilous for juvenile chinook salmon just starting their journey to the ocean: predatory striped bass lurk in gin-clear pools; low streamflows limit access to the shrimplike amphipods they feed on; downstream sloughs halt at dead ends. As young fish navigate from spawning grounds in California’s Feather River to the Pacific, climate change is further reducing the water available for their celebrated runs. Of the salmon populations struggling to survive along the Pacific Northwest, scientists worry California chinook may be the first to blink out.

Just as the Feather River salmon seem doomed, along comes a scheme that would be cockamamie if it weren’t so practical: a water-management project in Southern California that won’t divert water from a river, won’t involve new dams, and promises enhanced streamflow for the beleaguered Feather River salmon 780 kilometers away.

The key piece of this scheme, known as the Chino Basin Program, is a new recycled water treatment facility that should soon be built 60 kilometers east of Los Angeles, at the base of the San Gabriel Mountains. The inspiration of the Inland Empire Utilities Agency (IEUA), a regional wastewater treatment agency that distributes water imported from Northern California and the Colorado River to 875,000 residents in the southern county of San Bernardino, the facility will treat 18.5 million cubic meters of recycled water per year and store it underground. The plan should result in a reliable source of water for local residents while, in a roundabout way, bolstering flows for chinook in the Feather River—thanks to a clever trade agreement.

Rather than physically move water hundreds of kilometers across earthquake country between Northern California and San Bernardino, the plan involves reallocating water virtually, just as you would electronically transfer funds from one bank account to another. Once the Chino Basin Program is operational, in times of drought the southern region can draw water from the new reserve instead of from the State Water Project, a massive system of aqueducts and pumps redirecting Northern California water to farms and cities in the south. That will mean that water impounded by the State Water Project’s Oroville Dam can be released into the Feather River, benefitting the endangered chinook.

In a state where water rights are tightly regulated, over allocated, and historically contentious—and where municipal demand is increasing—the Chino plan can assure Southern California a reliable supply of local water that doesn’t risk regulatory conflicts with those upstate. 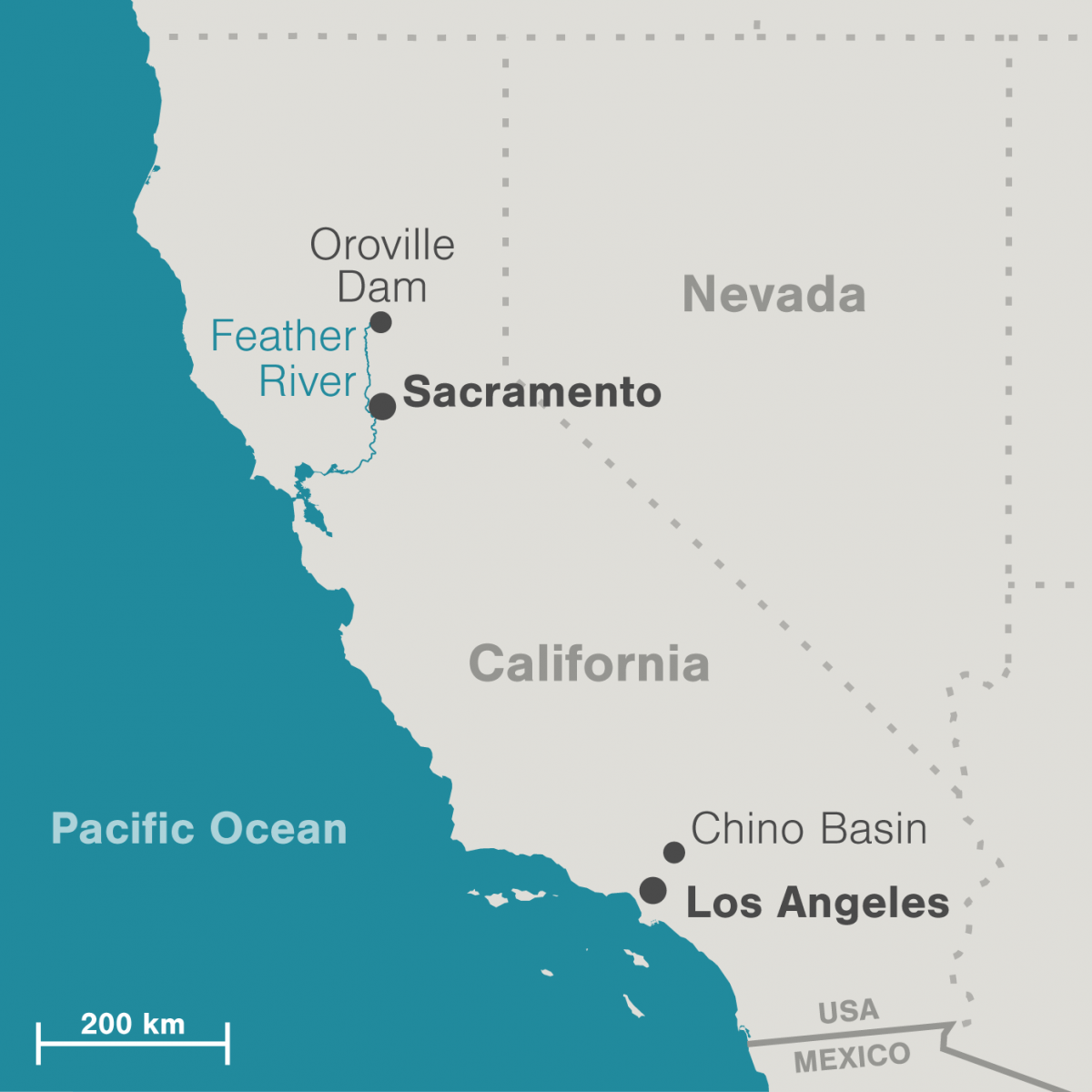 More water for chinook without new dams is what got John McManus’s attention. The lifelong surfer who has fished for salmon since he was a teenager has a history of opposing water-storage projects. “I’ve never seen a dam that’s good for salmon,” says McManus, the president of the Golden State Salmon Association, which endorsed but is not affiliated with the project. If the water exchange secures a future for imperiled fish, that’s “music to my ears,” he says.

The proposed water exchange would be the first of its kind and the first recycled-water project dedicated to tangibly benefitting Northern California ecosystems, says Jay Ziegler, policy director for the Nature Conservancy who conferred with IEUA at an earlier stage of the project.

The California Water Commission, the agency that oversees the state’s water management, has awarded US $207-million in conditional funding to IEUA, allowing it to develop agreements with the cities of Chino and Ontario and other member agencies to pave the way for construction to begin in 2021. Any challenge to the project will likely come from a state water contractor taking a hard line on conventional water rights and not wanting to participate in an untested innovation, says Brian Gray, a water expert with the Public Policy Institute of California. But if all goes well, the project could be in operation as early as 2026.

As climate change promises warmer temperatures and diminished mountain snowpack in the Sierra Nevada, which supplies 60 percent of California’s water, it will be increasingly critical to capture as much water as possible when it’s available, says Gray, who is not affiliated with the project.

Other regions that endure drought could replicate this model by capturing and storing storm water underground for use when supplies are scarce, he adds. The IEUA arrangement between agencies is unique, but by thinking creatively, water managers elsewhere could come up with ways to swap stored water with distant water contractors to alleviate pressure on the environment.

“It’s one of those rare instances where all parties can benefit,” says Gray.

Salmon have always helped build communities and bring people together, says McManus. By connecting water users in Southern California with salmon in the Feather River, the IEUA project may achieve just that. After all, he adds: “You rarely eat a piece of salmon by yourself.”