Black turban snails are small marine snails that make tasty prey for crabs. Failed crab attacks leave scars on a snail’s shell. By analyzing the rate of scarring and the size of the snail when it was attacked, researchers can learn important details about crab populations. Photo by MediaNews Group/Orange County Register via Getty Images

The Pacific coast of North America is littered with black turban snails, and many of these thimble-sized mollusks bear triangle-shaped chips on their shells. These chips are predation scars, evidence that, at some point in its life, this turban snail was attacked by a hungry crab.

Scientists have known that by studying these scars they can glean important insights about the predatory crabs, such as population numbers. In a new study, researchers have shown that by looking at the number of scars borne by modern snails and those on snail shells plucked from the fossil record they can stretch this comparison back up to 120,000 years.

“It’s really just so fascinating to think about the fact that you could be walking along the beach and pick up a snail and see this record of an interaction between a predator and its prey,” says Carrie Tyler, a paleontologist at Miami University in Ohio* who was not involved in the study. “I think it’s amazing to go back all the way to the Pleistocene and make that direct comparison.”

For the study, Kristina Barclay, a paleoecologist at the University of Victoria in British Columbia, compared the scars on black turban snails taken from study sites on the California coast near Los Angeles and San Diego with fossilized shells collected from the same area that date back to the Late Pleistocene, between 120,000 and 80,000 years ago.

She found that modern snails have a rate of scarring that is 10 to 15 percent lower than their Pleistocene counterparts, which likely reflects a decline in crab numbers. 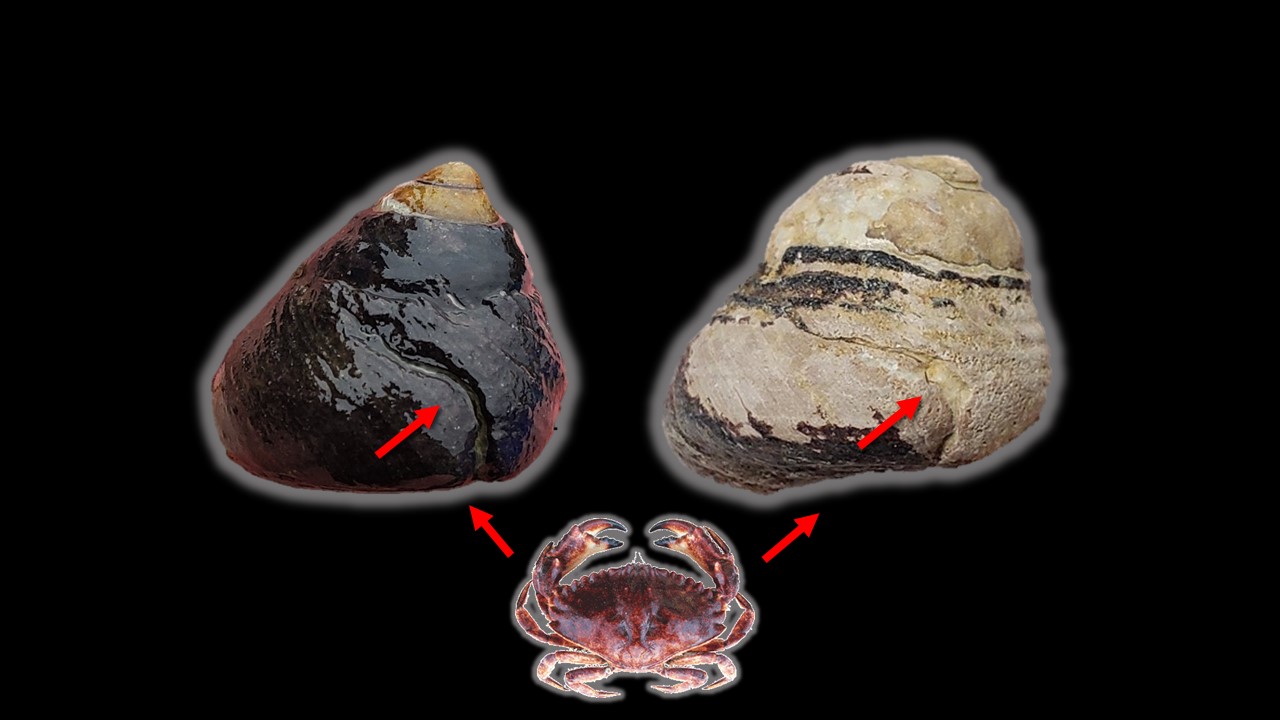 Predation scars on snails dating back to the Late Pleistocene can be compared to the scars on shells of black turban snails today. Photo courtesy of Kristina Barclay

To ensure that the lower rate of scarring represents a decline in crab population, rather than being a reflection of the crabs becoming weaker predators over the 120,000-year period, Barclay also looked at a measure called the size at attack—or how big the snail was when the crab tried to eat it. Scars that mar the snail’s shell near its center mean the crab tried, and failed, to eat the snail while it was still small, and was therefore a weaker predator. Conversely, if the size at attack was larger across a sample site, it means that crabs were better predators. Barclay found that despite the long time span the size at attack remained relatively unchanged, suggesting that the drop in modern-day scarring reflects a drop in crab numbers rather than a change in the crabs’ hunting efficacy.

The finding is consistent with previous estimates and anecdotal accounts that point to crab populations being on the decline. “I was really pleased to see that this is an extra piece of information that can support the story that we’re already hearing about crabs,” says Barclay. “This study is a helpful piece of evidence to say that maybe we should have a little bit more management of these fisheries.”

Given the relative ease of studying snail scars, Barclay hopes the method could be used by local or citizen science groups that are interested in monitoring crab populations.

*Correction: Carrie Tyler is at Miami University in Ohio, not the University of Miami in Florida.