Mystic Aquarium in Connecticut is home to the United States’ largest habitat for captive beluga whales. Of the country’s 30 captive belugas, three reside in the aquarium’s 4,000 square meter outdoor exhibit, a site dominated by a 50 by 25-meter kidney bean-shaped tank.* Now the aquarium, which puts the animals on public display and uses them as research subjects, wants more whales. It has submitted a request to the US National Oceanic and Atmospheric Administration (NOAA) to import five belugas from Marineland, a highly controversial amusement park in Niagara Falls, Ontario. The request has sparked criticism from animal rights organizations, who say the whales should be left where they are.

NOAA is ultimately responsible for approving or denying the request and it is collecting public comments through to December 2. NOAA spokesperson Jennie Lyons says the agency is also considering comments from other federal agencies, including the US Marine Mammal Commission and the US Department of Agriculture.

Mystic Aquarium’s request is controversial partly because it deals with the highly charged topic of marine mammals in captivity but also because it’s unclear whether the plan is legal.

In the United States, the Marine Mammal Protection Act makes it illegal to import, capture, or harass beluga whales. NOAA can issue permits for marine mammals to be captured or imported for public display or scientific research, but such permits come with several caveats. Key to this case: even with a scientific research permit certain criteria must be met to obtain authorization to import marine mammals from depleted populations, and also to put them on incidental display to the public.**

There are about 130,000 belugas living in the wild in Arctic and subarctic waters. The species is not endangered globally, but certain populations are at risk. According to the US Endangered Species Act, the population in Alaska’s Cook Inlet, for instance, is endangered and the Russian stock from the Sakhalin Bay-Nikolaya Bay-Amur River region is depleted.

Belugas face a number of threats, including habitat loss, pollution, entanglement in fishing gear, ship strikes, and, in the case of the Russian stock, capture for the international aquarium industry.

The five whales under discussion were born in captivity. But their parents were captured from the Russian stock in the 1990s, though, at the time, that population was not considered depleted.

That the parents are from a now-depleted stock is the focus of opposition from groups like the Animal Welfare Institute (AWI). “These animals are in trouble in the wild,” says Naomi Rose, a marine mammal scientist with the AWI. “Encouraging their trade either alive or dead is bad. We shouldn’t do it, and the US shouldn’t be part of it.”

Rose says this is the first time a US facility has tried to import belugas, or any marine mammal, from a depleted population for scientific research. That Mystic Aquarium’s plan would involve putting the whales on display “is specifically not allowed under the law,” she says. “If NOAA allows this, they are setting a very bad precedent.” 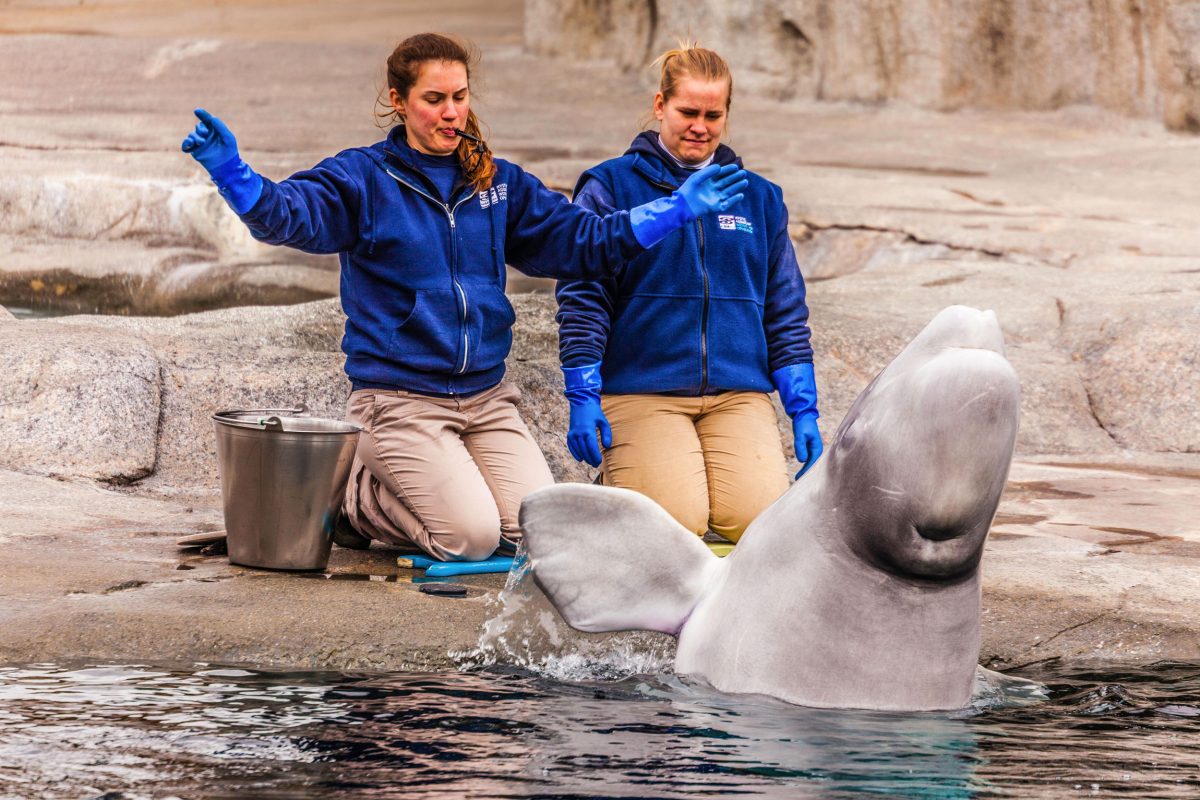 Randall Reeves, a marine mammal scientist and chair of the International Union for Conservation of Nature’s Cetacean Specialist Group, says he understands “the logic of the argument that by importing the animals and allowing them to be on display, the US facilities might implicitly encourage more capture trade.”

However, he has “always believed that the trend toward stopping further capture of wild cetaceans and relying instead on captive-born animals to stock facilities was a good thing, as long as the facilities being stocked are responsibly run and making good-faith efforts to care for the animals, promote conservation causes, and conduct scientific research.”

Reeves adds that he is “personally not convinced that it is fair to classify these captive-born belugas, regardless of their bloodlines, as depleted animals.”

According to NOAA, the depleted designation applies to all biological members of the stock, including those in captivity. But the question remains: are the five captive-born whales in question considered biological members of this stock? When asked, NOAA said that because the question relates to an open permit application, it cannot speculate on factors that might relate to their decision.

NOAA is, however, cognizant of the potential ripple effects of its decision. In 2013, the agency denied a controversial request by the Georgia Aquarium (a partner in the current permit request) to import 18 wild-caught belugas from Russia for the purpose of public display. (At that time, the stock was not listed as depleted.) In its official denial letter, NOAA said that its decision to reject that permit was made, in part, because of a fear that approving it would “likely result in the taking of marine mammals beyond those authorized by the permit.”

Tracy Romano, a beluga expert and chief scientist of biological research at Mystic Aquarium, says importing the five whales would help the whales individually as well as the conservation of wild belugas by strengthening the aquarium’s scientific studies.

“We have an opportunity to really help belugas in the wild, especially given climate change and rapid changes to their habitat,” she says. Of their eight proposed studies, one project is the development of new noninvasive techniques to assess the health of wild belugas. Moving the animals to the United States will also improve their quality of life, Romano says, as Marineland is overcrowded and the animals suffer a lack of one-on-one attention and training.

Romano is also skeptical that NOAA approving Mystic Aquarium’s request would symbolize a weakening of the law as some critics fear. “If other groups wanted to import belugas, their permit would need to be as good as or better than the criteria for research and rigor of research that we are setting,” she says.

Rose suggests Mystic should conduct its research at Marineland. She recognizes such a plan would be inconvenient and more costly, but argues that existing issues in the Ontario park, such as overcrowding, will lessen over time since Canada recently banned the captive breeding of marine mammals. The other issues can also be fixed, she says, by investing in better equipment and staff training. “Mystic should help all the whales at Marineland … and enrich their lives by doing the research there,” she says.

But Romano says the research must happen in Connecticut—partly because that’s where the aquarium’s laboratory is located but also because there are too many whales in Marineland, which would make training and working with individuals during experiments difficult. “Mystic Aquarium is the ideal space for the research to be effective,” she says.

Reeves thinks Mystic’s research is among the best. But he does have concerns, including about Mystic’s stance on not preventing mating by the captive whales.

To Rose, this position foreshadows another potential slippery slope, one that could lead to these whales—and their calves—winding up absorbed into the population of belugas used solely for public display.

“This is unacceptable,” she says. The restrictions on captive animals from depleted populations “are meant to prevent precisely this outcome.”

*Correction: This story has been updated to more clearly reflect the size of the outdoor beluga whale tank at the Mystic Aquarium.

**Correction: This line was updated to add important nuance. The line originally read: “Key to this case: even with a scientific research permit, it is illegal to import marine mammals from depleted populations and put them on display to the public.”