The process of water darkening is well-studied in fresh water, but scientists are keying into the effects it may be having in coastal environments. Photo by LWM/NASA/LANDSAT/Alamy Stock Photo

Coastal waters around the world are steadily growing darker. This darkening—a change in the color and clarity of the water—has the potential to cause huge problems for the ocean and its inhabitants.

“It’s affecting the quality of the sea we know,” says Oliver Zielinski, who runs the Coastal Ocean Darkening project at the University of Oldenburg in Germany. These “changes in the physics will lead to biological changes,” he adds.

Some of the causes behind ocean darkening are well understood: fertilizer enters the water and causes an algal bloom, or boats stir up light-blocking silt as they move. But other causes are murkier. During heavy rains, for instance, organic matter—primarily from decaying plants and loose soil—can enter the ocean as a brown, light-blocking slurry. This process is well documented in rivers and lakes, but has largely been overlooked in coastal areas.

Maren Striebel, an aquatic ecologist also with the Coastal Ocean Darkening project, showed in a large-scale experiment the power of this phenomenon.

In the study, Striebel and her team filled huge metal vats with water, phytoplankton, and silt. From peat, the team extracted a brown liquid as an approximation of the dissolved organic matter found in coastal waters. They put low, medium, and high concentrations of the liquid in the vats, and hung lamps above them to mimic the sun’s rays.

Over the first few weeks, the peat extract decreased the light’s ability to penetrate the water by 27 percent, 62 percent, and 86 percent, respectively, for the low, medium, and high concentrations. The phytoplankton suffered from the lack of light—primarily in the medium- and high-concentration vats.

However, and perhaps more importantly, the organic matter not only caused the raw biomass of phytoplankton to drop, it also favored some species over others. As phytoplankton form the base of the ocean’s food web, this could have stark implications. Some species of zooplankton, for instance, have adapted to eat one kind of phytoplankton. Any change in phytoplankton composition could result in winners and losers throughout the ecosystem.

Over time, Zielinski says, coastal darkening could have widespread effects beyond those on microorganisms. Decreased light availability, he says, would benefit creatures that don’t rely on sight to hunt, such as jellyfish, and hinder species such as fish that hunt better when they can see.

As the experiment progressed, Striebel says that the murkiness dissipated as light and microscopic life forms in the water began to degrade the dissolved organic matter, allowing the phytoplankton to fully recover. However, she says that in the real world, this relief may be unlikely. In the experiment, the water was contaminated with a singular addition of the peat extract. But under normal circumstances, rain would continue to push new dissolved organic matter into the ocean. 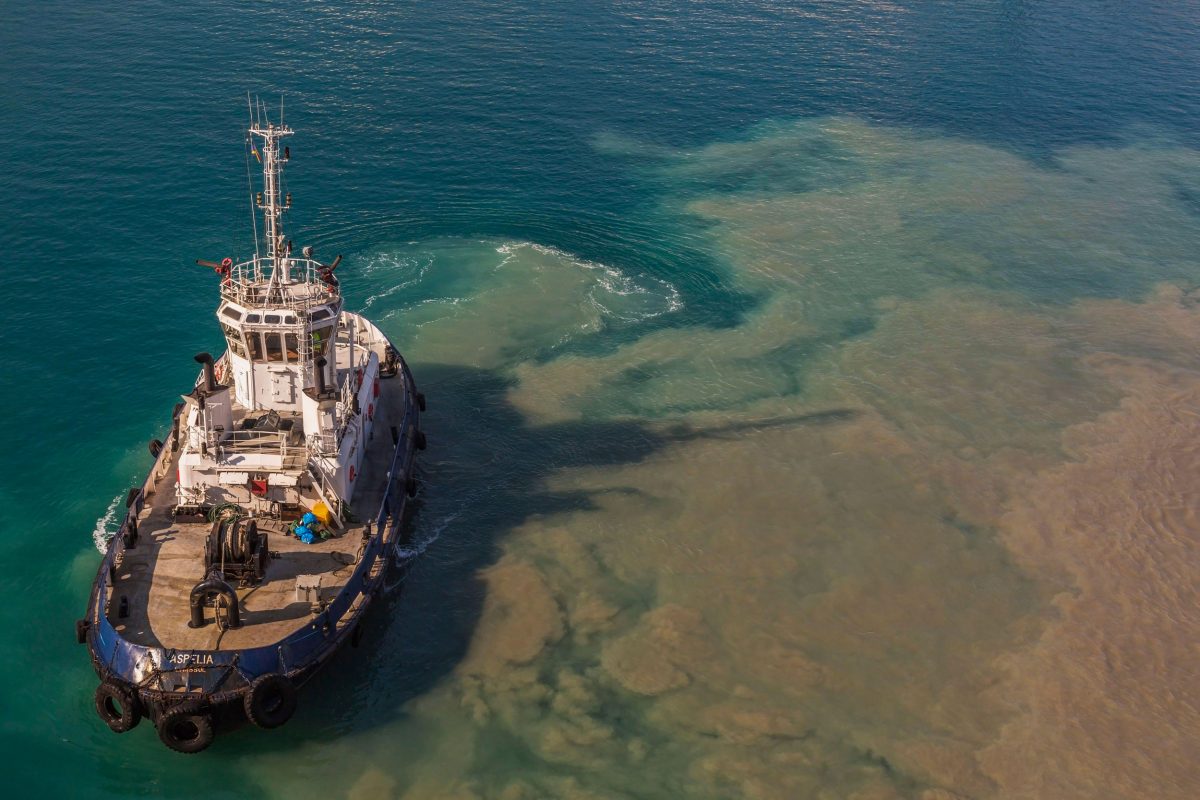 A range of processes can cause water to become darker, from the runoff of fertilizer and dissolved organic matter, to boats churning up seafloor sediments. Photo by Perry Mastrovito/Alamy Stock Photo

There were some other quirks of the experiment, too, that might have mitigated the effects of coastal darkening.

The organisms that lived on the bottom of the tank, for example, were largely unaffected. The vats had chambers that changed the water level to mimic the rise and fall of the tides. Striebel suspects the decrease in water depth at low tide meant more light could reach the life on this artificial seafloor. This wouldn’t necessarily be the case in some places that do not receive much natural light even at low tide.

According to research by Amanda Poste, an aquatic ecologist at the Norwegian Institute for Water Research, darkening could also have a pronounced chemical effect.

Along with various microorganisms, sunlight breaks down some toxic chemicals, including methyl mercury, that end up in some waterways. Poste’s study showed that if light is less able to penetrate the water, methyl mercury sticks around longer, potentially giving the pollutant enough time to transfer through the food web to fish and, eventually, humans.

Though researchers are only beginning to study its effects in detail, there’s strong evidence that coastal darkening is happening—and has been for a long time.

Over the past 100 years, the North Sea has been growing markedly darker, according to a 2019 study by biologist Anders Frugård Opdal at the University of Bergen in Norway.

This darkening, Opdal shows, may have already caused up to a three-week delay in the usual “bloom” of phytoplankton in the North Sea, when lengthening daylight and an influx of nutrients cause rapid population growth. The timing of these blooms is essential to some species, such as fish that rely on phytoplankton for food when they spawn.

All in all, it’s difficult to pin down any specific consequences of coastal darkening, says Opdal. The darker water may even be having some benefits, such as sheltering some species from predators. Somewhat ironically, while global warming is expected to push plankton to bloom earlier in the year, in the North Sea that change may have been somewhat mitigated by the darker water. It’s a tricky thing to study with many moving parts, Opdal says.

Environmental regulations around fertilizer use, and efforts to tackle greenhouse gas emissions, mean that in some places—such as the North Sea, parts of North America, and the Mediterranean Sea—the situation is already improving. There, the water is either staying at the same level of murkiness or even getting clearer. But such improvements are not the case everywhere, Zielinski says: more data is needed from around the world to really understand the breadth of the phenomenon.