Scientists think the conditions at Iceland’s geothermal sites, with their hot springs and hydrothermal vents, may be similar to the environment on Mars three billion years ago. Photo by Ralf Lehmann/Alamy Stock Photo

On a misty day near Reykjavik, on Iceland’s west coast, Bethany Ehlmann hiked along the edge of the fjord Hvalfjörður. Nestled between the steep cliffs and vertical veins of lava, she found what she was searching for: a rock with signs that showed water once flowed here.

The marks in the rock were subtle—little more than speckles and banding—but they suggested much more than the presence of an ancient trickle of water. They were earthly clues that would help Ehlmann, a planetary scientist and geologist at the California Institute of Technology, better understand the conditions in which life may have arisen on Earth. And, potentially, on Mars.

Before Mars became the frigid, inhospitable desert it is today, scientists think it looked a lot like coastal Iceland. Modern Iceland’s iron-rich rocks, glaciers, volcanoes, and hot springs reflect conditions on Mars more than three billion years ago. This makes Iceland a great trial ground for upcoming missions to Mars, including that of the Mars 2020 rover. Set to launch in 2020, this mission will, among other things, search for evidence of extraterrestrial life.

From satellite and telescope observations, and measurements taken on the ground by previous robotic explorers, scientists know a lot about the geology and environmental history of Mars. They’ve also discovered water at the planet’s poles, and evidence that liquid water once flowed on its surface—a critical ingredient for life as we know it.

For the past five years, NASA scientists and engineers have been trying to figure out where to send the rover, and what instruments to bring on board to maximize their chances of detecting evidence of past Martian life. The years-long site selection process came to an end last month: from a short list of four possible landing sites, NASA has chosen to send the rover to Jezero Crater—a former delta where an ancient river deposited weathered volcanic sediments.

Matt Golombek, cochair of the Mars Landing Site Steering Committee at the Jet Propulsion Laboratory in Pasadena, California, says the main factors that went into the site selection process were considering the sites’ diversity of rocks and the potential for the preservation of signs of life.

But what kinds of environments have the best chances of preserving that crucial evidence, should it exist?

Based on Ehlmann’s work: ones that look the most like Iceland. By studying the organisms that dwell in Iceland, Ehlmann’s research suggests that billions of years ago, when Mars was warmer and had not yet lost its atmosphere, the planet may have harbored enough liquid water below its surface that tiny, nascent life forms could have developed there. Just like the organisms in Iceland, Martian life forms could have been fueled by chemical energy from volcanic activity, she says. Occasionally, they may have even emerged onto the surface to dwell in melted snow and ice. 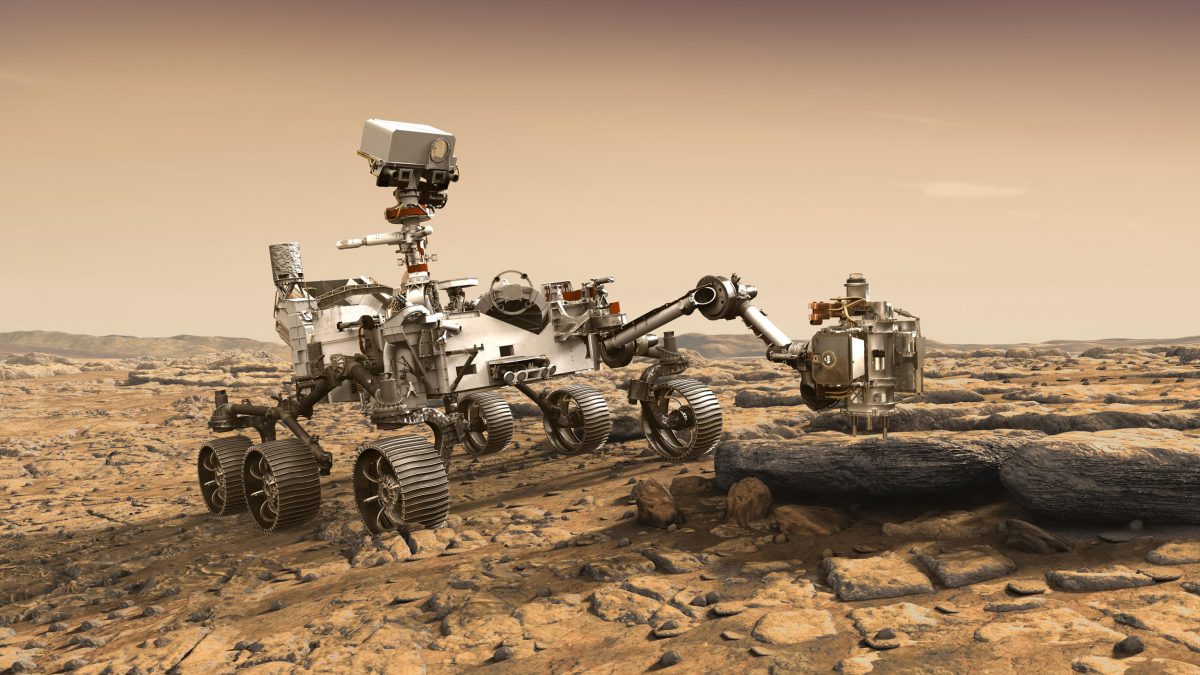 NASA’s Mars 2020 rover will be used to look for signs of ancient life. The rover is based in part on the successful design of the Curiosity rover. Artist rendering by NASA/JPL-Caltech

In Iceland, Ehlmann says, “there are underground microbes happily living and munching away on the rocks. They’re there, they form an amazing microbiome, and they’re being studied.”

Like Ehlmann, SETI Institute planetary scientist J. R. Skok has also contributed to the upcoming Mars 2020 mission. He says that for the mission to succeed, proper site selection is critical: the rover needs to land on a site with the right rocks and environmental history. He has studied how a rover’s instruments might find the kind of evidence scientists are looking for.

In particular, his fieldwork has taken him to the horse pastures of Lýsuhóll, on Iceland’s west coast, not far from Ehlmann’s research site in Hvalfjörður. There, he flew a drone to take high-resolution color photos of the area, then traversed the terrain on foot. Skok and his colleagues carefully scanned the area and mapped the site rock by rock. They looked for signs of extinct hot springs and hydrothermal vents—fissures forged by volcanic activity, spreading tectonic plates, and water—from which early microbes might have been born. Knowing precisely which types of rocks have the best chances of harboring signs of life is important because the rover will only be able to examine so many.

“On Mars, we’ll have 100-meter-wide hydrothermal deposits, and we’ll only be able to look for evidence of life, little microfossils, in pieces of rock,” Skok says. “We have to be able to pick out which two-millimeter rock in this giant field is the one to analyze.”

Based on his research, Skok says traces of bacteria or microbes could be found encapsulated in the silica deposits from hot springs or geysers, making these features good locations for the rover’s investigation.

If the Mars 2020 rover fulfills its primary mission to explore the Jezero Crater with energy to spare, the rover will trundle to one of the other shortlisted sites: Midway, a higher-elevation plateau with clay minerals that suggest the presence of water and older rocks that originated from ancient volcanic fissures.

Of the shortlisted Martian sites, Midway, in particular, resembles the now-dormant volcanic sites in Hvalfjörður. And as Ehlmann’s work indicates, if the Mars 2020 rover doesn’t find what it’s looking for in the Jezero Crater, the primordial rocks in Midway will be another great bet.