Flying foxes are the only mammals endemic to Mauritius, an island nation 900 kilometers east of Madagascar. Photo by Michael Sannwald/Alamy Stock Photo

Two years ago, Vashist Seegobin was paddling his kayak 200 meters off a Mauritian beach when he spotted a bat trying, very clumsily, to dip its belly and feet in the water. After six or seven attempts, the bat succeeded. Then, seemingly satisfied, it flew back to dry land.

Seegobin, a graduate student studying ecology at the University of Mauritius, was puzzled by this odd behavior. Over the next two months, he embarked on eight more kayak expeditions, watching bats engage in this apparent bathing ritual 14 more times. While observing the bats’ maritime antics, he was struck by a small detail he might have missed had he not been paying close attention: after dunking themselves in the sea, the bats carefully licked the salt water off their bodies.

Mauritian flying foxes are conspicuous creatures: golden-furred, with a wingspan that can reach nearly a meter, these endangered bats are the country’s only native mammal. Although Seegobin’s observations were restricted to just one area on the main island of Mauritius’s southern coast, locals have reported seeing the bats dip themselves into the ocean around the island. 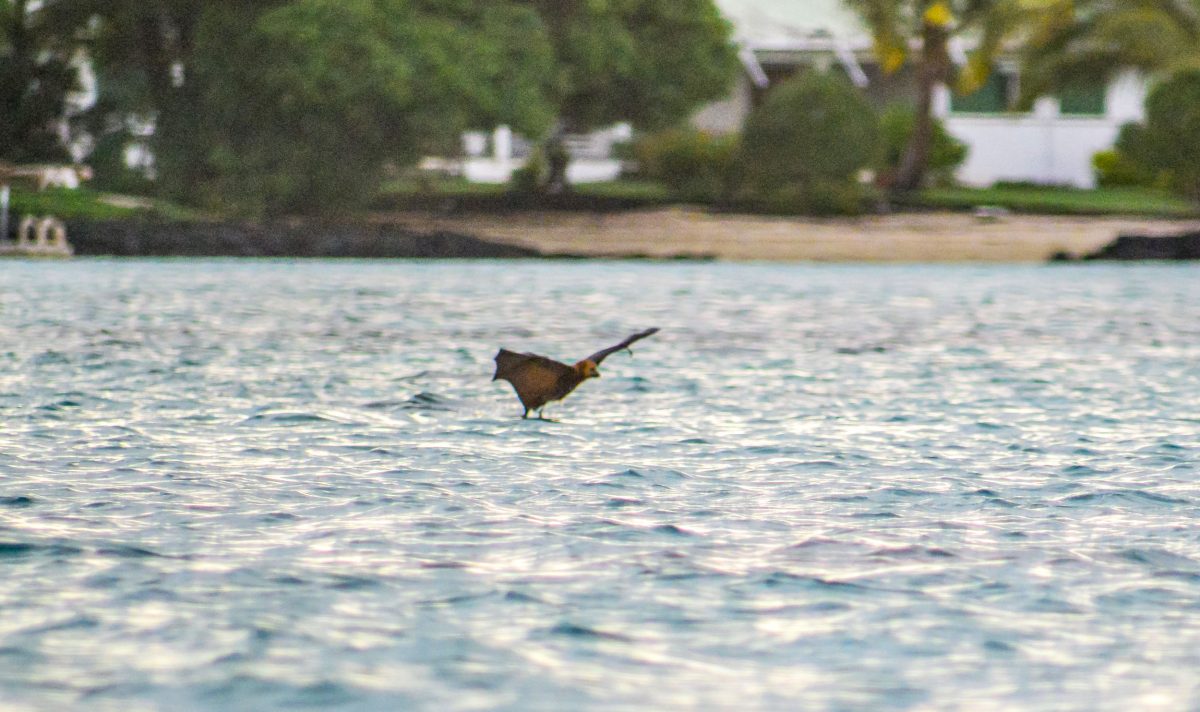 A Mauritian flying fox dips into the ocean in an effort, some scientists believe, to obtain sodium in its diet. Photo by Vashist Seegobin

Justin Welbergen, an ecologist at Western Sydney University and the president of the Australasian Bat Society, who was not involved in the research, has heard of the bats’ affinity for salt water. He recalls an Australian laboratory experiment that found flying foxes prefer drinking diluted seawater over fresh water.

“Belly dipping is a very common behavior in flying foxes,” he says, noting that they could be trying to cool off on hot days. “What is less common is that they do it in seawater.”

Seegobin, who recorded his findings in a recent study, suspects the bats are doing more than taking a dip. He thinks they are using the salt water as a source of nutrients. Like other vertebrates, flying foxes need sodium, an element critical for nervous system functions. And like many other herbivorous species, these fruit-eating bats don’t get enough sodium in their diets.

Around the world, many herbivores have evolved clever strategies for supplementing their diets with the nutrients they need. In western Amazonia, macaws and monkeys eat sodium-rich clay. Urine is known to attract butterflies and moths. And in East Africa, it’s common for tourists to stake out a salt lick and wait for wildlife—zebras, impala, warthogs, giraffes, elephants—to come to them.

Alternatively, fruit-eating animals can sometimes change which fruits they eat, adjusting their diets to get the proper balance of nutrients. But that’s a difficult proposition in Mauritius, where deforestation and invasive species such as long-tailed macaques and rodents are limiting the amount of wild fruit available to the bats. Tropical cyclones, which damage the main island’s cultivated fruit trees, present another challenge. That dearth of nutritional variety may explain the bats’ belly-dipping behavior.

Seegobin has now turned his attention to these external forces. If he can identify how they are changing Mauritius’s native fruit trees, he may begin to understand how those changes are influencing the bats’ dietary decisions—and ultimately secure a future for the imperiled animals.