To re-create a wine loved by ancient Greeks, a team led by farmer Antonio Arrighi and professor of viticulture Attilio Scienza submerged grapes in the Mediterranean Sea for five days. Photo courtesy of Roberto Ridi

Antonio Arrighi steered his boat into the Mediterranean Sea, just off the Italian island of Elba, and with the help of a small crew lowered a wicker basket full of grapes into the sea. Then another and another. That day, the farmer and his team sank 200 kilograms of fruit into the ocean. What looked like a baffling act of dumping was, in fact, a loving tribute to the past. Five days after submerging the grapes, divers plunged into the sea to retrieve them.

Twenty-five hundred years earlier, vintners from the Greek island of Chios were famous for a sweet, heady wine that was coveted by the day’s elite. These winemakers, however, concealed how they produced it. Attilio Scienza, a professor of viticulture at Italy’s University of Milan, believes it was the grapes’ salty bath that gave the drink its special something.

Arrighi and Scienza are on a mission to re-create these wines from antiquity, and to do so as authentically as possible. That means drying the sea-soaked fruit in the sun and fermenting it in terra cotta jars. The process has its quirks: because the seawater strips part of the grapes’ natural protective coating—called the bloom—the fruit dries quickly, allowing essential characteristics to be preserved.

According to Arrighi, an analysis run by scientists at the University of Pisa in Italy showed that his so-called vino marino contained twice the amount of highly prized antioxidants, known as phenols, as a typical bottle of wine. The salt water had also acted as a preservative, leading the team to forgo the sulfites that are added to most modern wines. 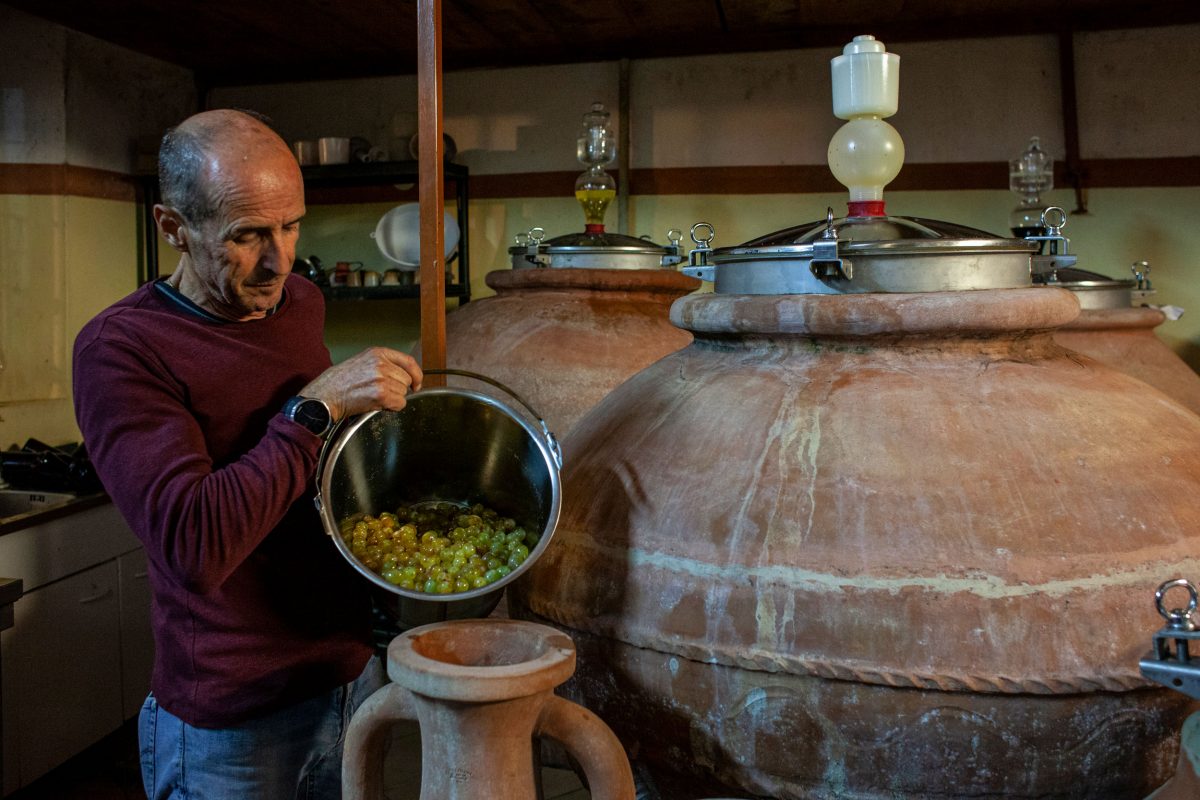 Arrighi’s initial batch of submerged grapes, which he sank in September 2018, has since yielded 40 bottles of a golden-hued wine he’s named Nesos, an old Greek word for island. This wine, says Scienza, is imbued “with a scent of Mediterranean herbs and an aroma of honey and almond.” The vintners kept these bottles for themselves, but the 2019 vintage has just finished maturing, and 200 bottles are being prepared for sale. The vino marino has a thicker consistency, perhaps because the grapes’ salt-brined skins stayed on quite long. “Nobody could have imagined it,” Arrighi says of the wine.

Patrick McGovern, an archaeologist at the University of Pennsylvania Museum of Archaeology and Anthropology and the author of Ancient Wine: The Search for the Origins of Viniculture, says this kind of experimental archaeology is vital for interpreting ancient winemaking. “Especially in antiquity, wine had many significant roles as a medicine, social lubricant, mind-altering substance, and highly valued commodity,” he says.

In ancient Greece, poor plumbing and sanitation led people to drink wine throughout the day, often mixing it into foul-tasting water to make it safer and more palatable. These ancient wines, however, were heavily sedimented and spoiled quickly. To improve flavor, vintners infused their wines with herbs, honey, or even lead—which, supposedly, added sweetness. To preserve them, they stirred in the sap of pine trees. The results must have tasted better than water, but probably not by much.