Melting permafrost is sending soil slumping into the sea—bringing nutrients and pollution with it. Photo by Boris Radosavljevic/Alfred Wegener Institute

On a small island in the Beaufort Sea, brown muck slides down tall cliffs, oozes into mud pools, and slithers into the ocean. It’s summer, and the permafrost is thawing. As the sediment enters the sea, it clouds the coastal waters, releasing organic carbon, nitrogen, and phosphorus. But that’s not all.

“We find large amounts of mercury and other pollutants,” says geoscientist Hugues Lantuit. “Anything that is caught in the soils is going to enter the coastal ocean.”

Some of those contaminants, which also include PCBs, DDT, and heavy metals, fall to the seafloor. Some will be taken into the food web. Previously, researchers have found high concentrations of mercury in polar bears, ringed seals, and beluga whales, for instance. That’s a problem not only here—on Qikiqtaruk (Herschel Island), off the Yukon coast, where Lantuit has studied for 15 summers—but also elsewhere in Yukon, as well as in Russia, Alaska, Greenland, and wherever warming air meets frozen ground.

Concentrations of mercury in marine mammals in the Arctic are 10 to 12 times greater than they were in the preindustrial period, according to a 2017 report from the Arctic Monitoring and Assessment Programme. The report also warns that the thawing of large areas of high-latitude frozen peatlands could release globally significant quantities of mercury into Arctic lakes, rivers, and oceans.

The World Health Organization (WHO) says there is a very high risk of elevated mercury levels among Arctic subsistence hunting communities that rely on seal and whale meat. The WHO estimated that consumption of mercury, a neurotoxin, may be causing an IQ loss of one to 13 points in people in these communities.

“One-third of coasts in the world are made of permafrost,” says Lantuit, a Parisian who leads yearly Arctic research expeditions for the Alfred Wegener Institute in Potsdam, Germany. “It is increasingly under stress because the summer sea ice is disappearing and that leads to greater wave forcing on the coast. The ice is not there anymore to protect the coast.” 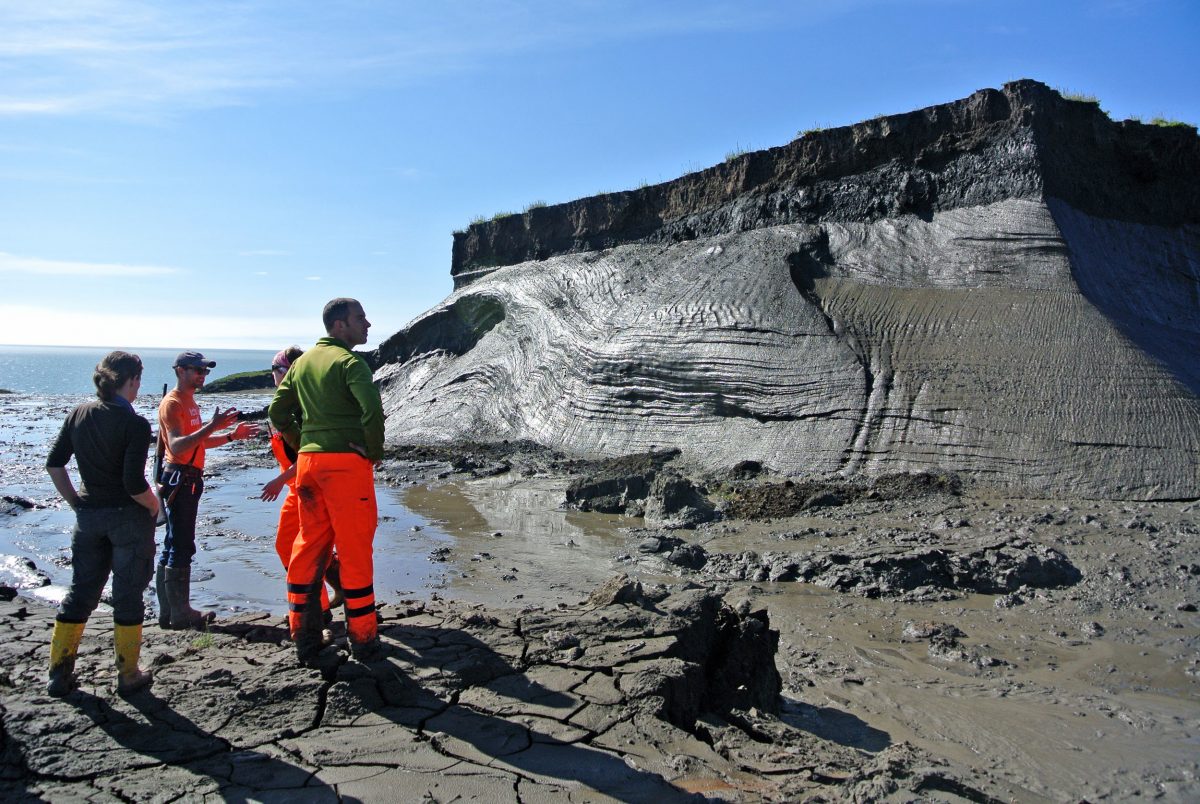 Lantuit’s most recent research reveals some startling facts about the consequences of all this permafrost melt: 8.6 million cubic meters of ice and soil—enough to fill seven Houston Astrodomes—have been carried off from a 190-kilometer stretch of the Yukon coast between 1952 and 2011. The number of landslides, also called thaw slumps, increased 73 percent during that time.

Joseph Kelley, a geoscientist and sediment expert from the University of Maine who was not involved in the Beaufort Sea study, says that movements of soil into the sea get “reworked by waves, for months perhaps, and will lead to enhanced turbidity which is local or even regional in scale.”

Turbid waters from sediment runoff reduce the amount of light that aquatic plants receive, which they depend on for photosynthesis. That affects the fish that feed on them and, in turn, indigenous communities that harvest these fish. Nutrient-laden sediments could also create better growth conditions for phytoplankton and a different set of problems, explains Michael Fritz, also with the Alfred Wegener Institute.

“Organic matter degradation in the coastal zone may also strengthen ocean acidification that causes stress on any species with carbonate shells, such as mussels,” Fritz adds.

Lantuit is looking to build on the Beaufort Sea research with a major new project named Nunataryuk, Inuvialuit for “land to sea,” which is funded by the European Union. Over the next five years, the project will see EU scientists working with Russian, Greenlandic, Norwegian, Canadian, and American researchers from 27 institutions to study the consequences of rapid permafrost thaw.

“The strength here is to start to bind all the knowledge that we have at the Arctic level, because permafrost does not have borders,” says Lantuit.