Algae in the genus Pseudo-nitzschia produce domoic acid, a toxin that can cause amnesic shellfish poisoning. Photo by NOAA Fisheries/NWFSC

In the spring of 1998, 70 sea lions showed up on California’s central coast with a mysterious illness. The animals, adults and youngsters alike, were vomiting and having seizures. At the time, the primary suspect was mercury poisoning, but Kathi Lefebvre, then a first-year PhD candidate at the University of California, Santa Cruz, suspected something else. Lefebvre remembered reading about a cluster of people in Canada who, in the late 1980s, showed similar symptoms after eating blue mussels harvested from Prince Edward Island that were contaminated with domoic acid, a neurotoxin produced by certain algae. Those people had been afflicted with amnesic shellfish poisoning, and she thought the sea lions might be suffering the same fate.

Lefebvre grabbed a cooler, blew off her biochemistry class, and headed north to the Marine Mammal Center in Sausalito, California, where the sick and dead sea lions had been transported. She collected as many samples as she could get her hands on.

“I got liver, kidney, muscle, blubber, feces, urine, all this stuff, and spent days and days and days by myself in the lab,” she says. After molecularly analyzing the samples and peering at them through a microscope, she found domoic acid and evidence of the type of algae that produces it (in the Pseudo-nitzschia genus) in the sea lions’ feces. This was the first time that domoic acid poisoning had been found in marine mammals.

Eighteen years later, Lefebvre has now detected the presence of domoic acid in marine mammals living off the coast of Alaska—a wholly unexpected result given that blooms of the algae that produce this toxin are typically associated with warmer water. 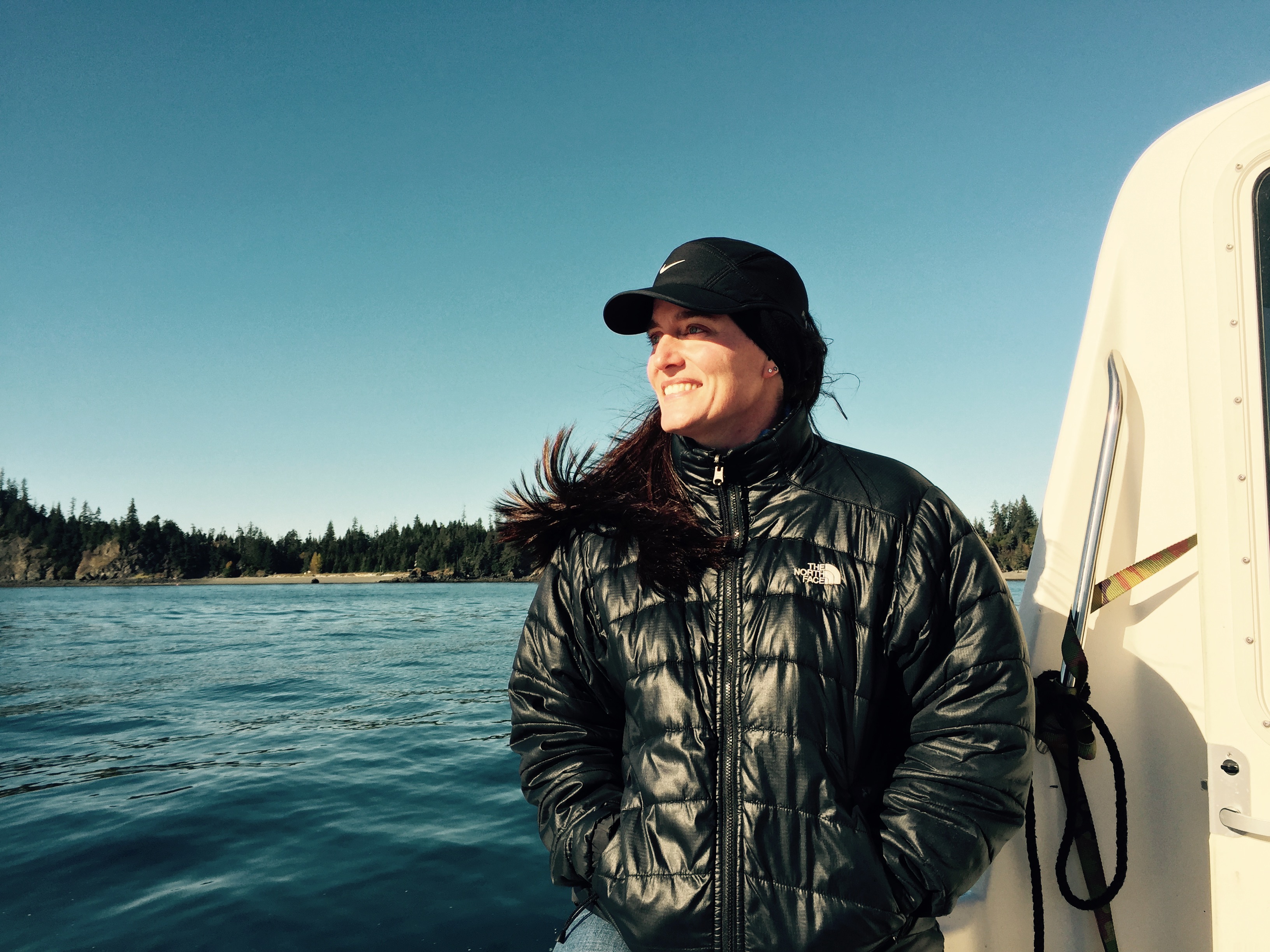 In her latest research, Lefebvre, who is now a research scientist at the US National Oceanic and Atmospheric Administration’s Northwest Fisheries Science Center in Washington State, found domoic acid in the bodily fluids and gastrointestinal contents of 13 Alaskan marine mammal species, including whales, seals, sea lions, walruses, and sea otters. She also found signs of saxitoxin (a different algae-produced toxin that can cause paralytic shellfish poisoning in humans) in 10 of the 13 species. She and her colleagues found both toxins in bowhead whales living as far north as the Arctic Ocean.

It’s not clear if climate change and a warming ocean are allowing the toxin-producing algae to move north, or if no one had noticed them there before. But if seals and sea lions are eating domoic acid, it is possible Alaskans might be exposed to it, too.

Marine mammals are an important food source for Alaska Natives, and Lefebvre speculates that the risk of amnesic or paralytic shellfish poisoning from eating the muscle or blubber of marine mammals is probably low. These algal toxins are water-soluble, so they don’t accumulate as they move up the food chain, unlike heavy metals such as mercury. While Lefebvre and her colleagues didn’t measure the toxins in the muscle or blubber of the marine mammals they sampled, she’s not convinced the team would have found them at measurable levels if they had. 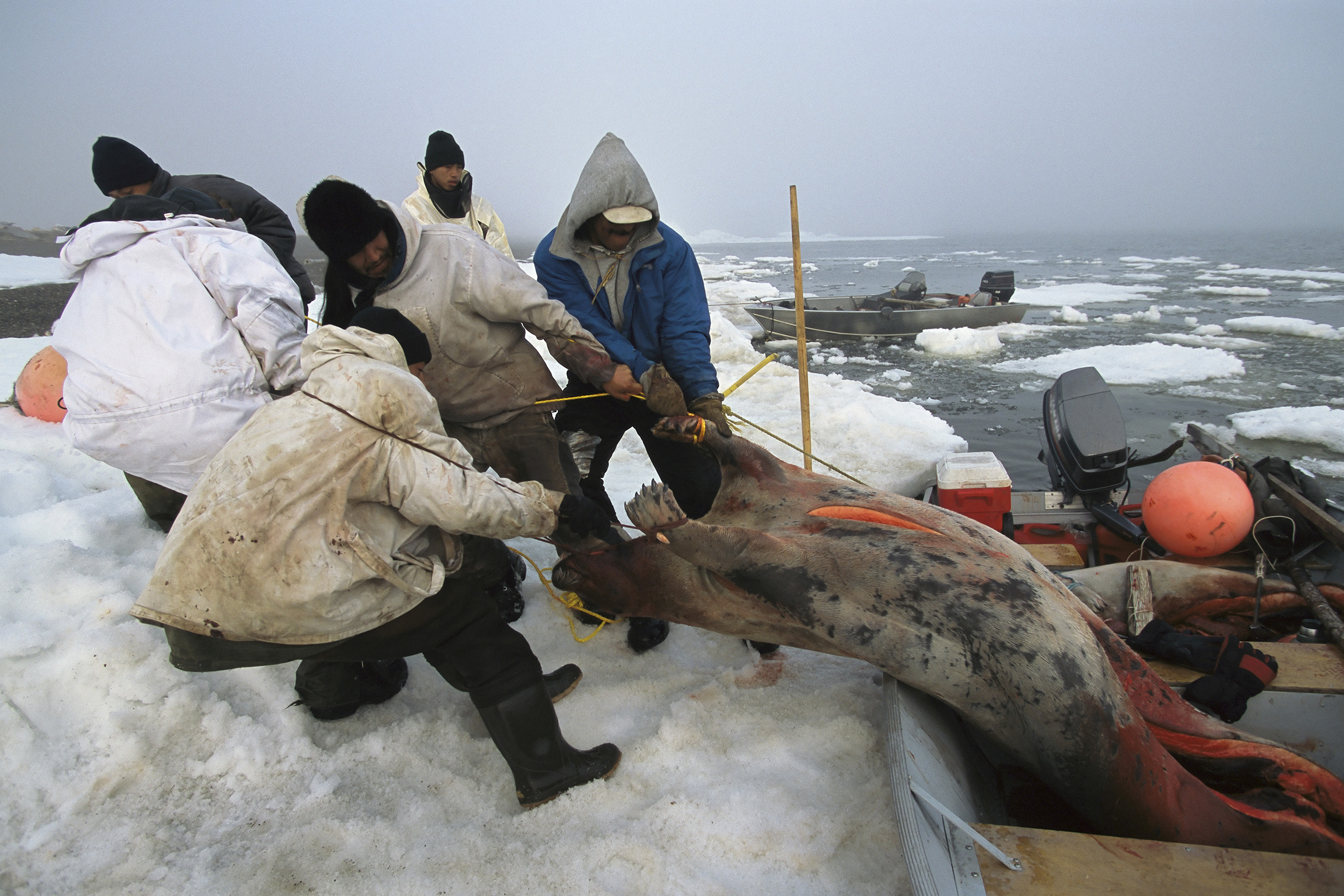 Bearded seals were one of the 13 marine mammal species found with detectable levels of domoic acid. Photo by Karen Kasmauski/Science Faction/Corbis

But that doesn’t mean the coast is clear. Domoic acid and similar toxins enter the food chain when shellfish or fish, like anchovies, feed on affected algae and become “toxic bait balls,” as Lefebvre calls them. Sea lions like to eat anchovies, but so do people. The team found domoic acid in every species of marine mammal (although not every individual animal) they tested. Odds are, people could be exposed, too. “More toxins in the food web mean more chances for exposure,” Lefebvre says.

Because this is the first time anyone has looked for domoic acid in Alaska, it’s impossible to say what it really means.

“Is this a growing risk? Is it just how things are?” asks Louisa Castrodale, a veterinary epidemiologist for the state of Alaska, who was not involved in the research. “I think everybody is very interested and obviously wants to know more, especially because it does impact food security.”

Without knowing if the toxins’ presence is new, or just previously overlooked, Gay Sheffield, a marine ecologist and co-author on the new research, is urging calm. “Putting a scare on unnecessarily is a dangerous thing to do,” she says. “You’re talking about peoples’ ways of life and their food. … Culture, nutrition, and local economics revolve around the subsistence harvest of non-commercial marine resources.”

Whatever the actual danger to the food supply may be, just the perception that wild-caught foods might be risky to eat is a threat to food security, says Davin Holen, a coastal community resilience specialist and anthropologist focusing on food security at Alaska Sea Grant. “It really makes people afraid to eat anything, from shellfish to marine fish, up the food chain to the larger marine mammals. So, I think it’s a good study to try to understand what’s going on.”

For now, Lefebvre says the key takeaway is the need for more monitoring.

“From the human health side of things, the fact that there are more toxins in the food web is something we need to be aware of and monitoring,” she says. “Especially if we start having it in areas where we’re not used to it.”