Isle de Jean Charles, Louisiana, home of the Biloxi-Chitimacha-Choctaw band, is disappearing as it loses land to the Gulf of Mexico. Photo by Coco Robicheaux/Alamy Stock Photo

It’s a sunny day in southern Louisiana, and I’m sitting on a porch listening to 91-year-old Wenceslaus Billiot, the oldest member of the Isle de Jean Charles band of the Biloxi-Chitimacha-Choctaw, describe how the island has changed throughout his long life.

“When I was a kid, my daddy and I would go to Montagut in a pirogue to get groceries,” he says, as a breeze stirs the wooden wind chime by my side. “We used to trap [muskrat]. Then when we sold the furs, we’d go make a grocery bill for the summertime.”

There is no trapping on Isle de Jean Charles anymore, and looking out from Billiot’s porch it’s easy to see why. Not even 100 meters away—beyond the protective ring levee that girds what remains of the island—is open water. The wetlands where Billiot and his father once hunted are gone. Since 1955, the island has lost 98 percent of its land to erosion, subsidence, and a rising sea. Soon it will lose most of its inhabitants, too.

Two years ago, the Isle de Jean Charles band received US $48-million from the federal and state governments to relocate the community to a new site about 50 kilometers inland, likely within the next few years. The move made the band the first government-recognized climate refugees in the country.

When it’s time for my visit with Billiot to end, I take off the virtual reality headset. Suddenly, I’m back in a classroom at the Louisiana Universities Marine Consortium in Cocordrie, an hour’s drive from Isle de Jean Charles.

In reality, Wenceslaus Billiot died in March. But in virtual reality, his memories and his stories, as well as the experience of visiting his home—to drink in the sights and sounds of the disappearing island—will live on. 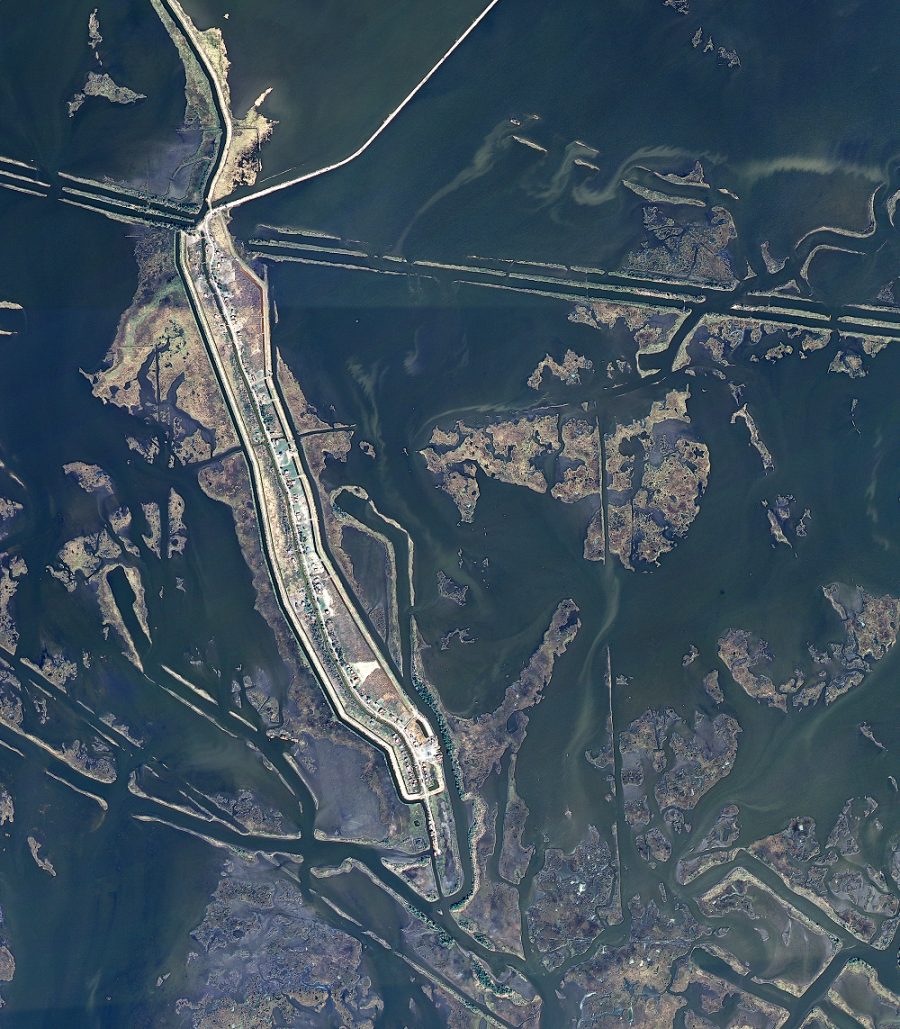 Isle de Jean Charles, Louisiana, has all but disappeared. Photo by USGS

My visit with Billiot was orchestrated by Heather Stone, a historian from the University of Louisiana who two years ago embarked on an oral history project to preserve the Biloxi-Chitimacha-Choctaw people’s culture as their land is lost beneath the waves. She’s working to capture the tribe’s memories before their move off the island is complete. “Place plays a big part in memory,” she says. “The fear is that once they leave, they … will lose the memories.”

Along with stories and interviews, the project is recording images of a landscape that will soon be gone. For future generations, a virtual visit will be the only way to experience this place. “This is where the real power is,” Stone says. “You cannot see what is lost until you know what was there.”

Albert Naquin, chief of the Isle de Jean Charles band, hopes the project will preserve memories of his community’s culture and connection to the land in a more meaningful way than a conventional historical archive. The virtual reality archive is “going to be a lot easier than reading,” he says, “when you hear it in words from some of the folks.”

Stone agrees: “You’re immersed in the environment, you can look around, see and hear everything. I don’t know how it could be more immersive.”

Stone is among the first historians turning to the immersive powers of virtual reality. But as the technology matures, the technique is becoming more widespread.

Tom Perry, who works in communications for the World Bank, collaborated with people from Fiji to showcase in virtual reality how climate change is already affecting their land and culture. That immersive experience was presented at the United Nations conference on climate change in Germany last November.

“VR is incredibly effective in reaching people who are time-poor or cynical,” Perry says. “Once you put the headset on someone, you command their attention. They can’t look away.”

At the UN meeting, for example, Perry managed to get his VR headset on former New York mayor and climate philanthropist Michael Bloomberg. “We got 10 minutes of his time, when he was completely focused on the message of the Fijians,” he says.

Many Fijians have bittersweet feelings about the recordings, says Ken Cokanasiga, the project’s community liaison in Fiji. They mourn the portrayal of places they have now—the beaches where they swim and important ancestral sites—that will be lost as rising seas force them inland. But they are happy the technology will allow future generations to see, and in some small way experience, what they had.

“They will treasure this moment, because one day it will not be there anymore,” says Cokanasiga.

But these archives can be more than a memory of a lost land, Naquin says. “What we remember, we can bring back.”