Natural disasters do not destroy buildings evenly. By studying which fall and which are left standing, engineers can develop new strategies for the future. Photo by David J. Phillip/AP Images

When you first see the sheer magnitude of destruction where a hurricane made landfall, “there’s usually a take-your-breath-away moment,” says Tracy Kijewski-Correa, a structural engineer at the University of Notre Dame in Indiana. But Kijewski-Correa and her colleagues catch their breath and begin their work surveying the damage inflicted on buildings along the hurricane’s path. Their immediate findings aid rescue operations and early responders, and their detailed examinations fill crucial gaps in engineering studies about how to build better along the coast.

Since 2018, Kijewski-Correa has been the inaugural director of the Structural Extreme Events Reconnaissance (StEER) Network, part of the US National Science Foundation’s Natural Hazards Engineering Research Infrastructure (NHERI) program, which sends volunteer engineers to assess damage from hurricanes, tornadoes, earthquakes, and tsunamis.

StEER engineers are now busily assessing the devastation from Hurricane Ida, which smashed into the Louisiana coast on August 29. Their experience in 2020 with Hurricane Laura, which hit just down the coast with 240-kilometer-per-hour winds, offers a road map for their research.

Last August, Laura marched right up its well-predicted path as various academic and government groups raced to set up equipment. “We had probably six different teams coordinating in the 24 hours to landfall, putting instruments down and then getting the hell out of there before it hit,” Kijewski-Correa says. A few wind engineers remained behind—huddled in a hotel room as the storm screamed by, cheerfully texting during the scariest gusts. 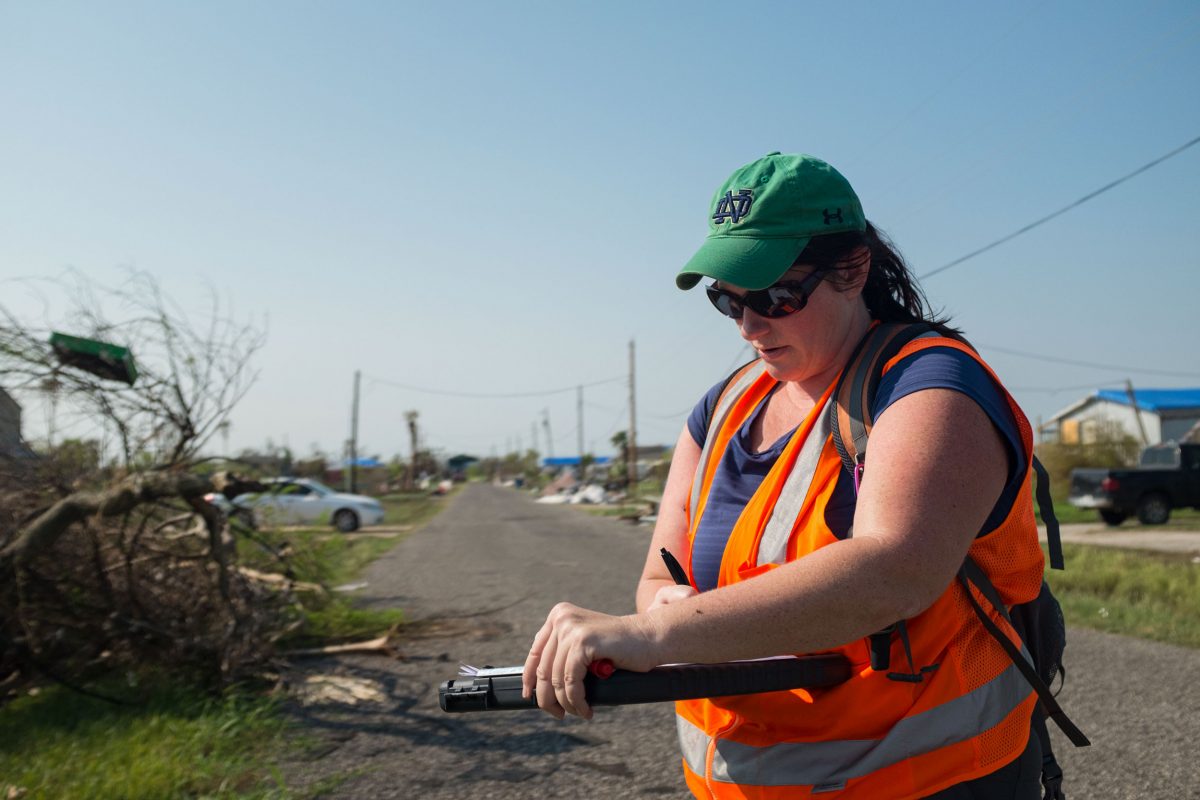 Meanwhile, dozens of structural engineers around the United States joined a StEER virtual team that mined social media, local media, reports from emergency agencies, and other sources to create a comprehensive picture of the event. Managers at the Federal Emergency Management Agency (FEMA), which couldn’t ramp up as quickly, were among those poring over StEER’s reports.

Kijewski-Correa vividly remembers watching television coverage of the 1985 Mexico City earthquake from her home in Chicago, Illinois, when she was 10, and feeling the obligation to do better by those trapped in the rubble. As she moved into an engineering career, studying how buildings react to wind, “that seed was in the back of my mind,” she says.

In 2005, a year after the Indian Ocean tsunami killed more than 200,000 people, she joined Notre Dame and Thai engineers in examining what she calls the “mind-blowing” damage along Thailand’s coast. She carried her infant son on her back. “As a mother, that one was really hard, because we were encountering parents still looking for their children,” she recalls.

Kijewski-Correa continued to lead ground surveys after extreme events, including in Haiti after the massive 2010 earthquake, and in 2016 after Hurricane Matthew.

When Hurricane Harvey hit Texas in August 2017, another group of NHERI extreme-event responders asked her to enlist a team of structural engineers, and she threw together the first such community-led hurricane response. Importantly, this ad hoc effort standardized and shared all the data it collected—not a given in academia.

This was the genesis of StEER, which has now recruited 300 researchers and covered dozens of disasters.

In disasters before Hurricane Laura, a team of StEER volunteers would have flown in as soon as the storm passed. But after Laura, because of COVID-19 restrictions, the engineers trickled in over time.

A few volunteers, such as David Roueche, a structural engineer at Auburn University in Alabama, did drive in right away. Arriving 12 hours after the hurricane made landfall, “literally nothing was changed,” says Roueche. “All the power lines were still down; all the debris was still on the road.”

Roueche strapped a 360-degree camera system (like those used for Google Street View) on his car and began gathering images cataloging hundreds of kilometers of destruction. These images then could be processed and shared with virtual teams—a cornerstone for StEER’s efforts to understand the extent of the damage throughout the region. 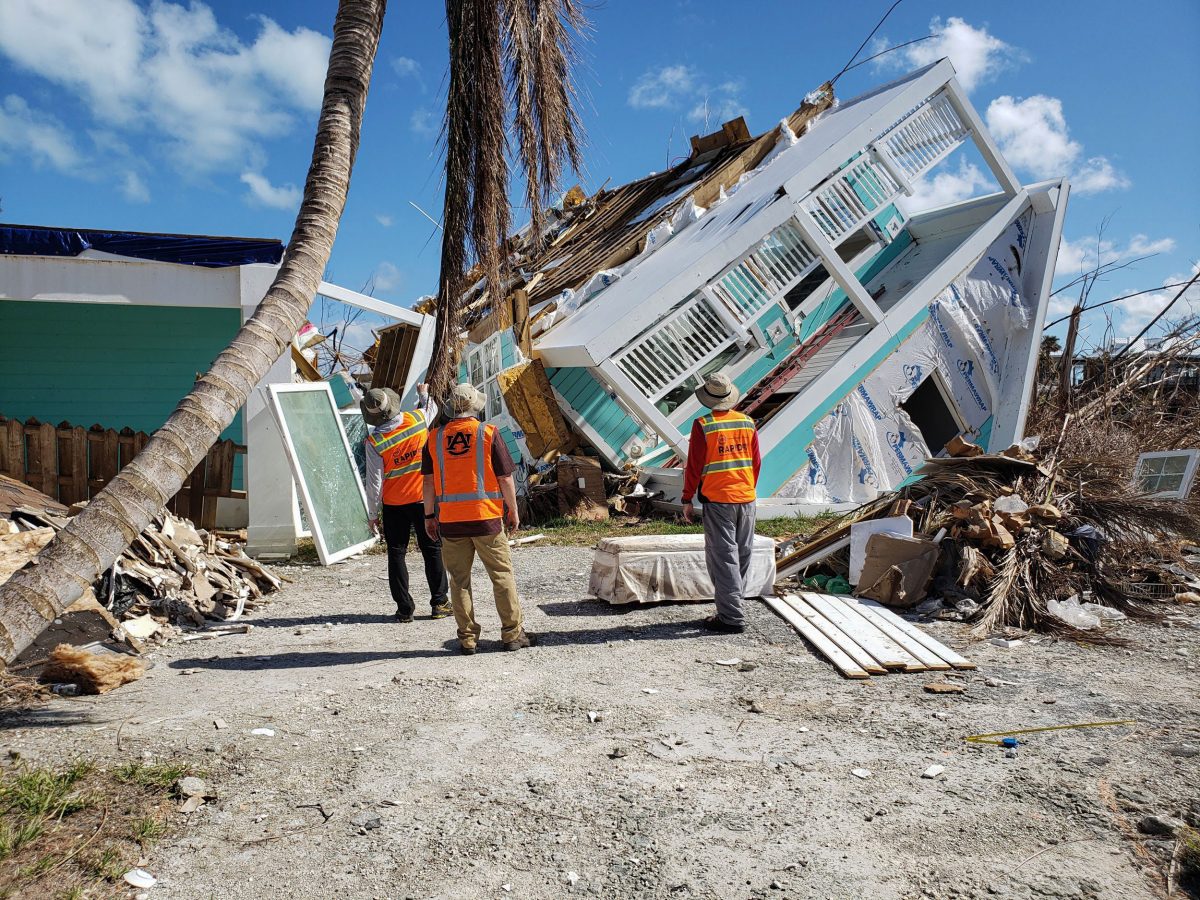 Engineers with StEER use a variety of tools, including car-mounted 360-degree cameras and drones to survey areas hit by natural disasters. Photo courtesy of StEER

StEER teams use a mobile phone app to report battered buildings and take high-resolution images tagged with GPS location data, which they share with the public. Some teams deploy aerial drones, taking thousands of photographs and using them to generate 3D images of the scene, says Ian Robertson, a structural engineer at the University of Hawaiʻi at Mānoa. Automated imaging analysis software can also pore over drone images—for instance, to estimate the number of damaged roofs.

The engineers try to capture the details of a representative sample of buildings, rather than targeting the most spectacular wreckage. All of this information and analysis is helping them learn the sometimes-subtle reasons why two adjacent, seemingly identical, homes often meet radically different fates, perhaps because of hidden differences in their construction or because one was hit by a highly local force such as a tornado-like microgust.

But it’s no simple job to pick apart how combinations of wind, rain, surge, and waves together can ruin structures.

“Many of those interactions only occur during the biggest storms, when the surge and the waves inundate land and there’s heavy rainfall,” says Britt Raubenheimer, a coastal oceanographer at Woods Hole Oceanographic Institution. Raubenheimer leads a sister organization to StEER that places instruments along the shore before hurricanes to measure surge, waves, sediment flow, and other processes, and then examines how the coast is changed. “We really, really need measurements during these big storms to understand how these processes affect each other,” she says.

Kijewski-Correa and her colleagues are using the data collected for Laura, Ida, and other storms to develop much more powerful simulations of how hurricanes affect different kinds of buildings, and to help them learn new things about designing structures to withstand them.

Even after more than 15 years of racing to respond to one disaster after another, Kijewski-Correa says the work remains highly personal.

When she does house-to-house surveys, she always makes a point of talking with the inhabitants, rather than simply photographing their houses, quickly assessing the damage, and moving on.

“I learn a lot by taking a moment to talk to a family,” she says.

“I do genuinely care. I want to extend compassion and respect for the idea that I’m now walking through your loss—of everything you’ve worked so hard to build,” she says. “I’ve held hands. I’ve cried. I’ve hugged. I’ve made sure that sick people were able to get help. But I’ve also received beers and high fives.

“We show them that we’re here for you,” says Kijewski-Correa. “And we’re going to do our best so this never happens again.”