In the Netherlands, replanting vegetation in tightly spaced groups and adding an iron-based fertilizer resulted in better success in coastal restoration. Photo courtesy of Ralph Temmink

Over the last six years, a group of marine scientists has built up evidence that the vast majority of coastal restoration projects globally are designed and planted incorrectly. A simple change of layout, they say, could dramatically multiply success rates for restoring everything from oyster reefs to mangrove forests.

Today, the team is using the mudflats of the Netherlands’ Eastern Scheldt as a testing ground to work out how to best replant large areas of coastline across the world, employing surprising tools including a 3D-printed mesh made from potato chip waste and frozen sticks of fertilizer the rust-red color of blood.

The vast majority of marine restoration projects take their cue from land-based agriculture and commercial forestry, says Brian Silliman, a marine conservation biologist at Duke University in North Carolina. They are planted in dispersed patterns, he says, in “sort of a HairClub for Men fashion, where you spread everything out, plantation style.”

In 2015, Silliman and colleagues at Duke surveyed 25 restoration organizations in 14 states—working in a wide variety of ecosystems, including salt marshes, mangroves, and oyster reefs—and found that more than 95 percent used this strategy. The guiding logic is the same as in a farmer’s field: that evenly spaced, well-dispersed planting reduces competition between transplants for light and nutrients.

But Silliman says that in stressful environments, such as nearshore environments where plants are battered by crashing waves and harsh storms, positive interactions between plants are more important than the downside of competition.

Silliman’s 2015 paper showed that when marsh grass transplants were planted together in clumps of nine plants side by side, their densely tangled roots and stems stabilized sediments and made them more resilient. The plants also drew down oxygen into the soil, helping each other to avoid soil anoxia, which can lead to the formation of toxic compounds. The clumped strategy led to increases of 100 percent or more in growth and survival rates.

Since then, their evidence base has grown: a 2020 paper showed that clumping enhances the return of seagrasses, which have declined by 30 to 60 percent globally. Tjisse van der Heide, a professor of coastal ecology at the University of Groningen in the Netherlands who works with Silliman, says a forthcoming paper will show that mussel and oyster reef restoration also benefit from clumping.

David Burdick, a marine scientist at the University of New Hampshire who was not involved in this research, says the work is exciting, but warns that more evidence will be needed to win over decision-makers who value low-risk, uncomplicated, low-cost projects. Changing the planting strategy to clumps would be “a little harder to execute,” he says.

Van der Heide and postdoctoral researcher Ralph Temmink at the Royal Netherlands Institute for Sea Research say the biggest concern with clumping is cost. Simply replacing each of the dispersed plants with a clump requires many more transplants. And while planting the same number of plants in widely spaced clumps has proven more successful, it does increase the time needed to recolonize a whole shoreline.

In recent experiments, van der Heide and Temmink aimed to mimic the natural benefits of clumping without needing large numbers of living transplants. 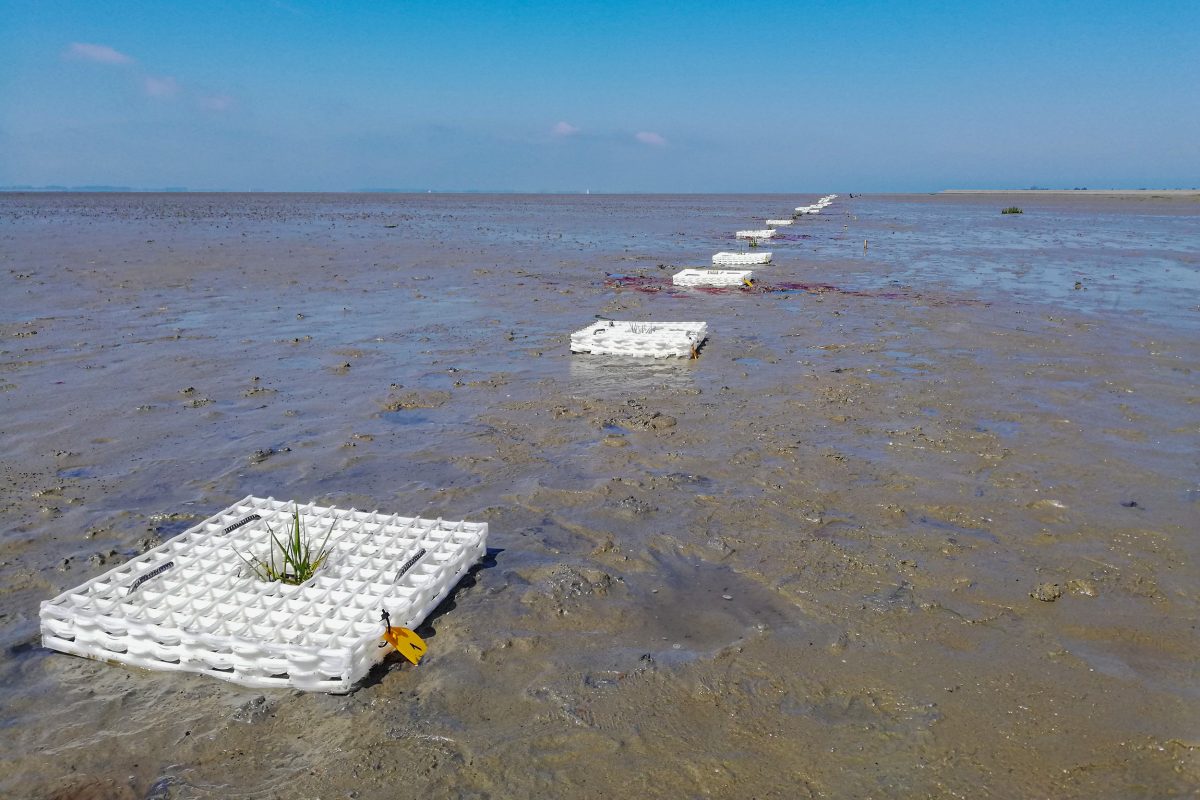 In a test plot, a research team at the Royal Netherlands Institute for Sea Research replanted cordgrass inside mesh structures made from biodegradable starch. Photo courtesy of Ralph Temmink

In June, in their Eastern Scheldt test plot, the team planted cordgrass within a half-meter-wide mesh structure they’d 3D printed using biodegradable starch (from potato scraps) bound in polymers. The cage-like structures replicated the effects of dense root mats of cordgrass, stabilizing the sediments and limiting the physical stress on the transplant. They added frozen sticks of iron chelate, typically used as fertilizer in agriculture, to help fight anoxia. The sticks are like gory popsicles, which melt quickly once planted says Temmink. “It looks a bit like a bloodbath.”

The team is also interested in testing impacts of co-planting different species to help transplants. Introducing lucinid clams alongside seagrasses, for instance, has been shown to clear toxic sulfides from the sediments. “You can get another free 100 percent” boost in survival rates this way, says Silliman. “And if you plant plants around predators, you get another 100 percent increase, because the grazers that eat the seagrasses are kept in check by the predators.”

On Derawan Island, a marine reserve in Indonesia, for example, conservationists brought back sharks to stop turtles from overgrazing the seagrass. This kind of restoration is closer to some ambitious experiments of multispecies rewilding now being pursued on land. “That is something that could be interesting also in the future,” says van der Heide, “although I would not know at this point how to reintroduce sharks.”