The decision by Nauru to accelerate the timeline for deep-sea mining will affect everyone. Photo by Seaphotoart/Alamy Stock Photo

Nauruans have suffered a legacy of destructive extraction. Like many other small South Pacific nations, Nauru was devastated by colonial powers. Over time, Germany, Great Britain, Australia, New Zealand, and Japan stripped the country of white gold, or phosphates, leaving large swaths of the land uninhabitable moonscapes of white pinnacles. The roughly 10,000 people who live on the island crowd along the coastline, the only fertile land left, and are threatened by erosion and climate change. For over a millennia, nesting seabirds sought refuge on Nauru and ensured the richness of phosphate, but now, they don’t come as often.

The geographically isolated country is roughly a third the size of Manhattan, New York. But Nauru has recently taken up an outsized spot on the world stage. It used an obscure clause in the United Nations Convention on the Law of the Sea to give the International Seabed Authority (ISA), the independent body tasked with regulating the ocean floor in international waters, a two-year deadline to finalize the exploitation regulations of the Mining Code—the set of rules that will determine where, when, and how the deep sea can be mined.

The ISA must now work to either finalize the exploitation regulations, or provisionally approve mining licenses under the draft regulations. Nauru kick-started the race on behalf of Nauru Ocean Resources Inc., a wholly owned subsidiary of DeepGreen, a deep-sea mining company based in Vancouver, British Columbia.

That Nauru has pulled this trigger is not much of a surprise, says Pradeep Arjan Singh, a legal scholar at the University of Bremen in Germany. But it is the timing that has onlookers wondering, Why now? 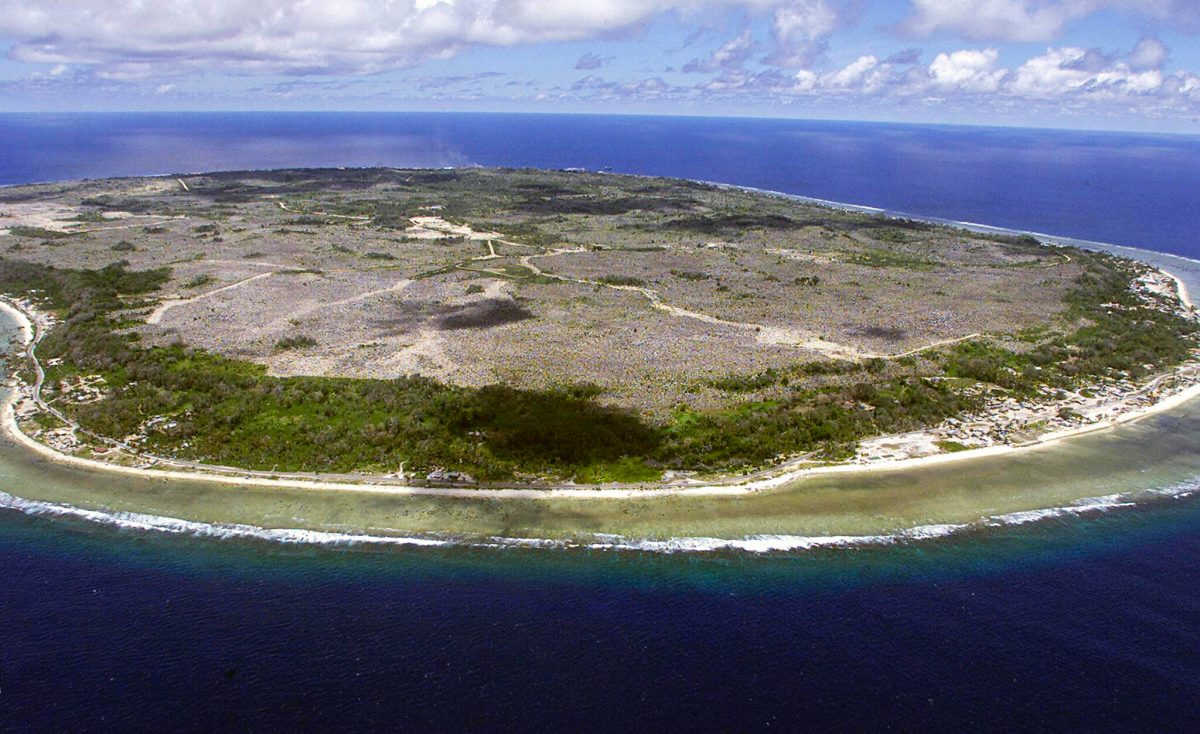 Starting in the early 20th century, a series of colonial powers extracted vast amounts of phosphate, and wealth, from Nauru. Photo by Torsten Blackwood/AFP/Getty Images

The ISA was expected, though not required, to finalize the exploitation regulations in 2020, but the ongoing pandemic significantly slowed the process. For Nauru, says Singh, “there must have been some frustrations on their part, because not much has happened since the last in-person meeting in February.”

DeepGreen has an incentive to get things moving, too. The company plans to merge with the Sustainable Opportunities Acquisition Corporation to form a new entity called the Metals Company, and go public on the Nasdaq stock exchange in the third quarter of 2021.

“In terms of timing, [the trigger] could be a step to ensure market confidence to build up your value and to convince shareholders that okay, within two years, roughly speaking, the regulations should be there,” says Singh.

“There is pressure because contractors have investors,” says Saleem Ali, a professor of energy and environment at the University of Delaware and an adviser to DeepGreen. “If you’ve invested money, you want some return on the investment or at least some idea of what the timeline is. … But that shouldn’t be thought of as something subversive.”

In a filing to the US Securities and Exchange Commission in March, DeepGreen wrote that “the ISA has committed to completing and adopting the regulations on an expedited basis and we expect the code to be adopted no later than 2023.” The use of the two-year rule is a major step toward ensuring that will be the case.

In response to interview requests, a spokesperson for DeepGreen referred to Nauru’s public statement on the two-year notice. In that statement, the Nauruan government stressed that the decision to invoke this rule was made by the government of Nauru alone. The government says it took this step as Nauru stands to lose the most from climate change, and the deep sea-mining industry offers “a rare opportunity for […] social and economic development.”

“They have a terrible history of phosphate mining which was inflicted upon them during the colonial era,” says Ali. With deep-sea mining, he adds, “their own land is not going to be impacted, and they will have the ability to have revenue.”

But the move comes at a controversial time for deep-sea mining. Observers are concerned the ISA delegates will struggle to negotiate regulations appropriately because of pandemic restrictions that limit in-person meetings. More than 420 marine scientists recently petitioned for a pause on deep-sea exploitation out of concern about impacts on the marine environment. Civil society organizations, such as the Pacific Network on Globalisation, meanwhile, are calling for an outright ban.

“In our view, DeepGreen stands to gain the most from pulling this trigger,” says Maureen Penjueli, coordinator at the Pacific Network on Globalisation. “There are other industry players and industrialized countries that are waiting in the background. … I think it’s really unfortunate that Nauru was the country to pull this trigger and set this precedent.”

Michael Lodge, secretary general of the ISA, told the BBC that despite this push, the earliest mining could begin is 2026. Even that could be a conservative estimate, according to Singh. Even if a contractor, such as the Metals Company, can file an exploitation application in two years, that application would still need to be approved and the contractor would need to test equipment and undertake environmental impact assessments.

But with the clock now ticking, the ISA has a tremendous task ahead to finalize the regulations, particularly around the financial structure. The ISA is mandated with regulating the deep sea on behalf of all humankind, and so some of the proceeds from deep-sea mining are required to benefit everyone. How exactly that will work is, predictably, very complicated. In the meantime, nations, conservation groups, and observers are strategizing about how to respond to Nauru’s move.

“[The trigger] is like throwing a hammer up in the air and seeing where it lands,” says Duncan Currie, a legal adviser to the Deep Sea Conservation Coalition. “It’s just injecting all this uncertainty into what’s already a very difficult negotiation.”