Eight kilometers off the coast of Palm Beach, Florida, with the city lights a constellation on the distant horizon, I roll backward off the side of a boat and am immediately enveloped in darkness. Only my flashlight slices a path through the inky water, and I feel like an untethered astronaut on a spacewalk. It can be spooky to be suspended in liquid night with restricted vision, especially when the water is murky after a storm. But over the last few years, I’ve overcome my apprehension, and night diving in the raging Gulf Stream current over abyssal depths is now something I enthusiastically do with a small group of talented divers every week, weather permitting.

We embark on these nighttime excursions, known as blackwater dives, to photograph small, free-floating marine organisms that migrate up to the ocean’s surface after dark, along with their predators. This type of extreme wildlife photography—at night and in deep water—originated in Hawai‘i and is now popular worldwide including off the southeast coast of Florida, where the narrow continental shelf, deep water, and powerful Gulf Stream current provide the right ingredients for an abundance of marine animals.

Traditionally, a lot of the creatures I’m drawn to, ranging in size from a dime to a saucer, have only been photographed lifeless and colorless in a lab, underneath a microscope or soaked in formaldehyde. But now they have gone mainstream, and a growing body of photography, built by many gifted photographers in the field, is finally showing how spectacular these Lilliputian species really are.

After I’ve plunged into the pitch black ocean, my eyes have adjusted to the darkness, and I’ve rechecked my air supply, I go on the hunt for some of the most challenging subjects in underwater photography: bizarre larval fish, squid, and invertebrates that are typically highly mobile and near impossible to photograph. They hide in plain sight, in a thick soup of marine snow—particles of organic or inorganic matter that filter through the water—zooplankton, seaweed, and plastic. Sometimes I get lucky and find more traditional fare near the surface: seahorses, sea turtle hatchlings, and flying fish. The latter are my absolute favorites, coming in several hard-to-identify species, shapes, and colors.

When I find my elusive subjects, the fun begins. Challenges include illuminating them with my flashes (most of the organisms are transparent or shiny and easy to expose incorrectly); focusing (my lens has a shallow depth of field with no room for error); and most importantly, maintaining situational awareness (not going too deep or too far from the group, which uses a large illuminated buoy as a reference point for safety).

Back on board after nearly two hours underwater, we’re a noisy bunch, sharing photos and trying to identify what we’ve photographed. The excellent company and camaraderie on the boat, kilometers offshore when most sane people are asleep, is unbeatable. And as the driver finally eases the boat back into its slip, I’m already anticipating the next trip and what it might reveal. 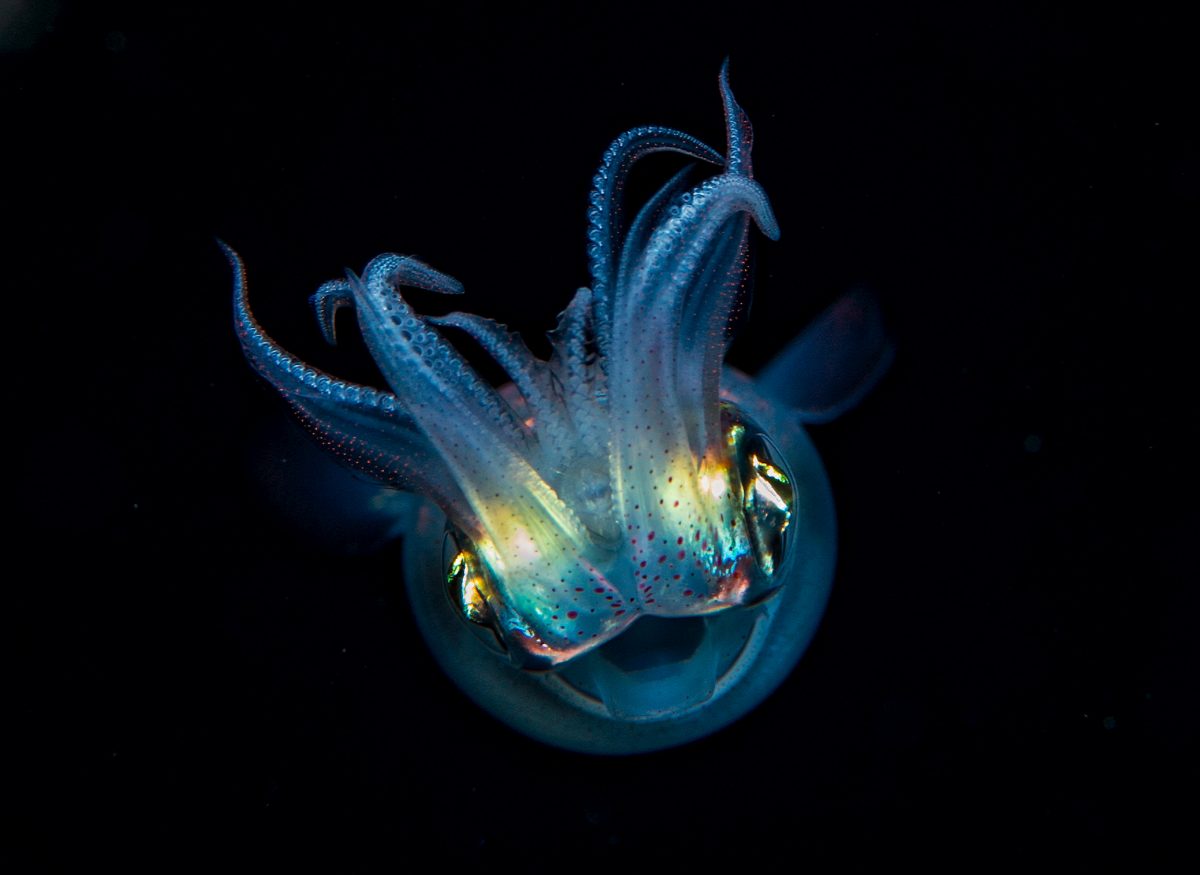 An arrow squid (Doryteuthis pleii) roughly the size of a AA battery drifts in the Gulf Stream current, illuminated near its eyes by my two flashes. Last year there were so many arrow squid near Palm Beach, Florida, where all images in this collection were taken, that I stopped photographing them—this year I’ve seen very few. 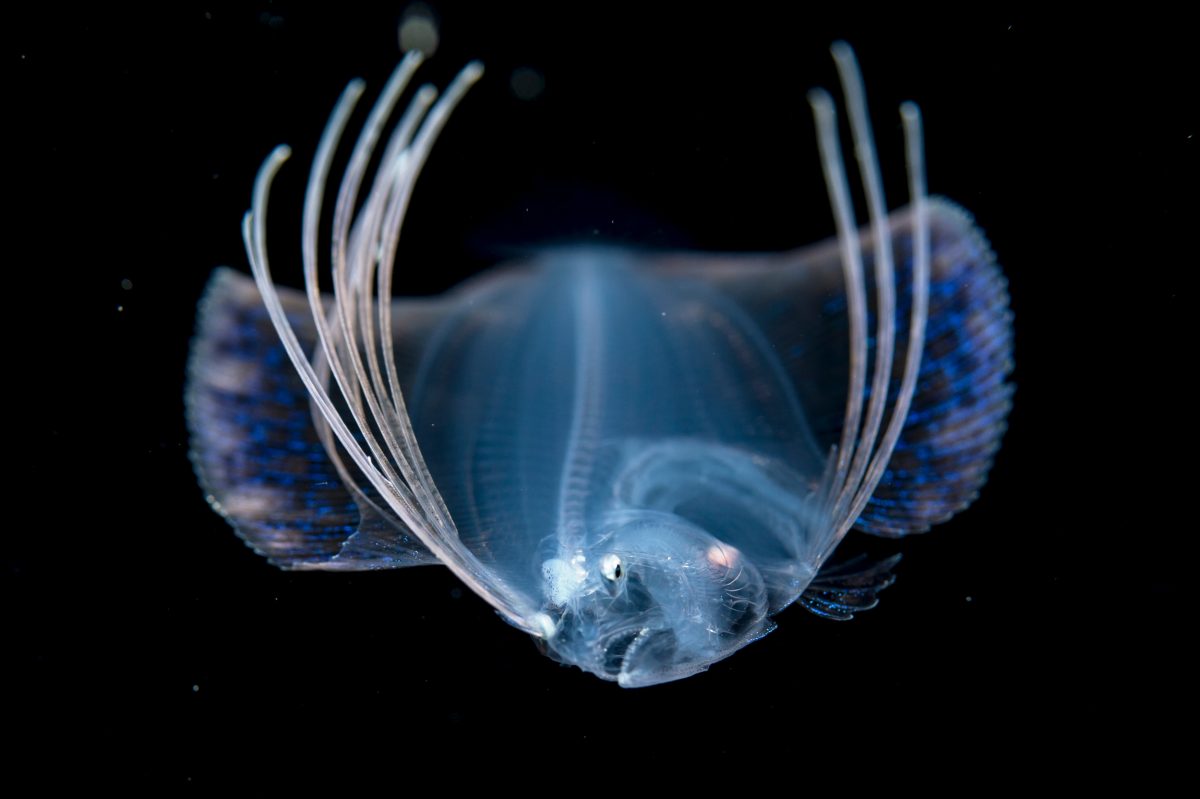 This larval flounder, possibly a spotfin (Cyclopsetta fimbriata), the size of a potato chip, was one of the most beautiful things I’ve seen in the ocean; it was like a silk handkerchief drifting in the wind. 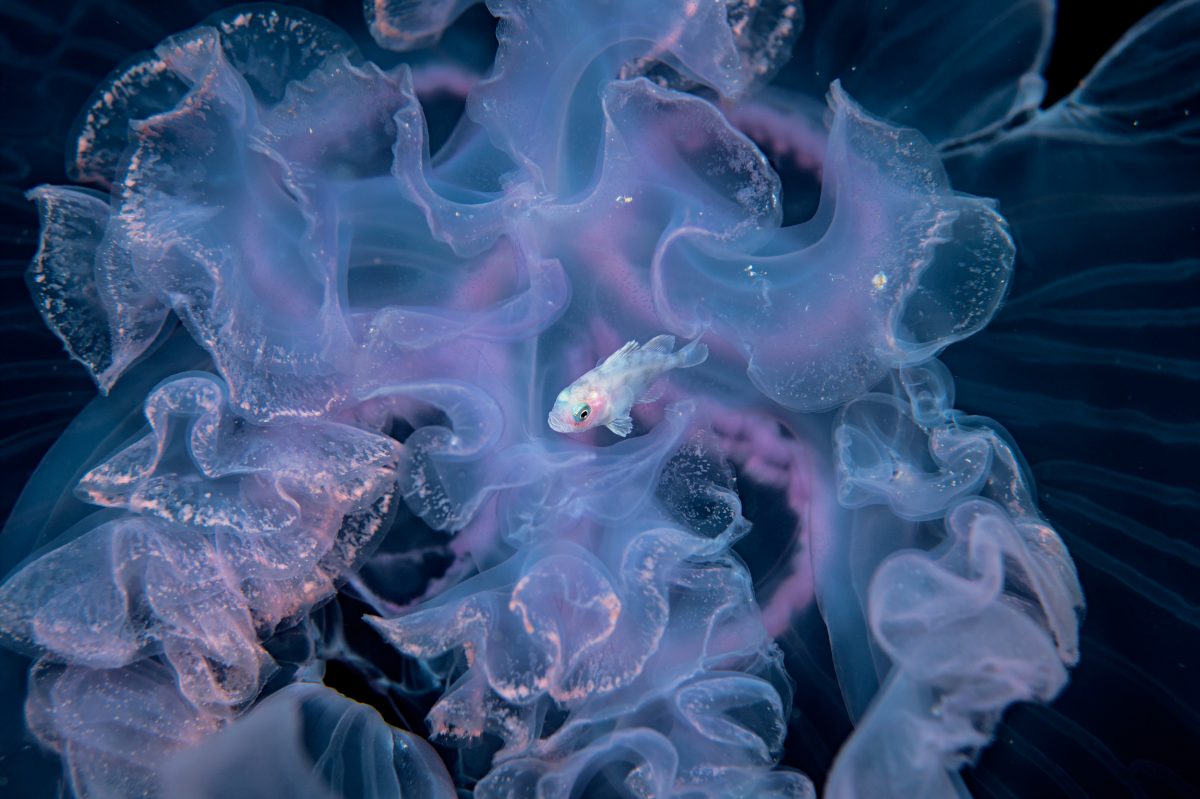 An unidentified jack (Caranx sp.) seeks protection inside a moon jellyfish (Aurelia aurita) the size of a small pizza. It’s common to find jellyfish with many little jacks hiding inside. 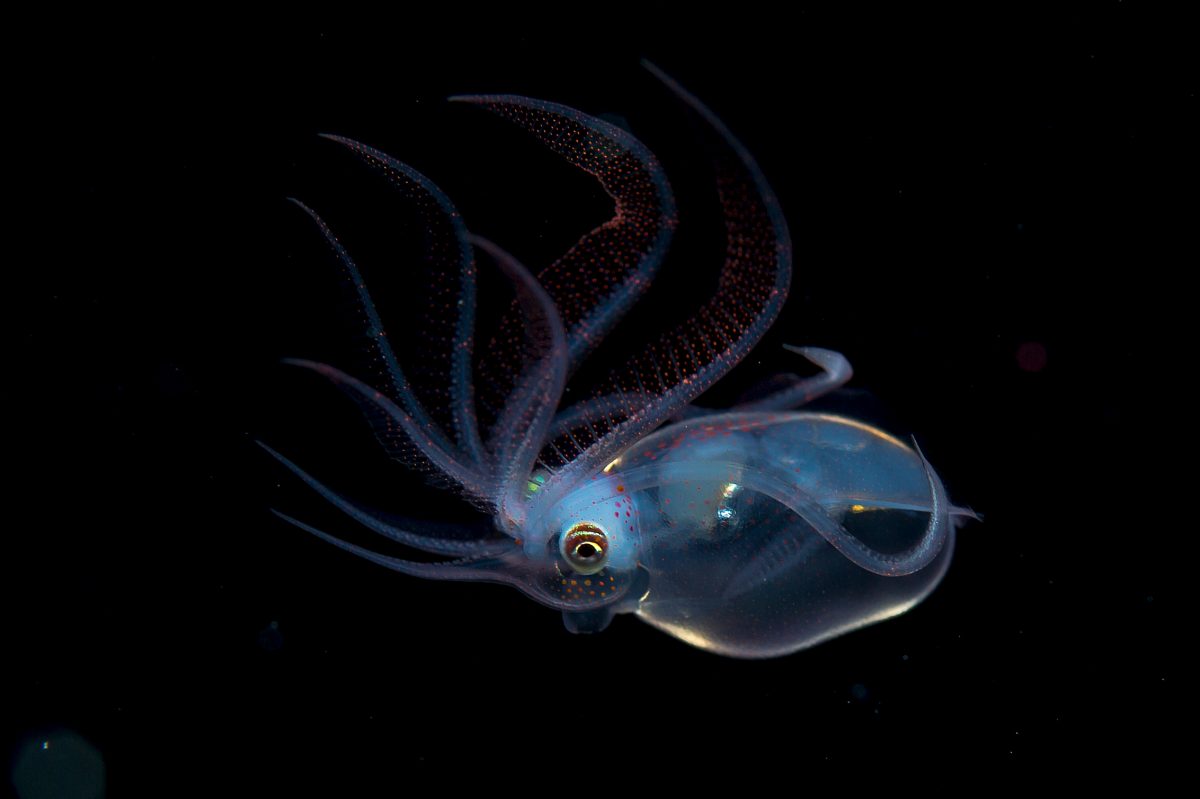 This juvenile diamondback squid (Thysanoteuthis rhombus) was a particularly challenging subject. It was extremely beautiful, but only the size of a quarter. As adults, diamond squid, found in tropical and subtropical waters around the world, can grow as long as a couch. 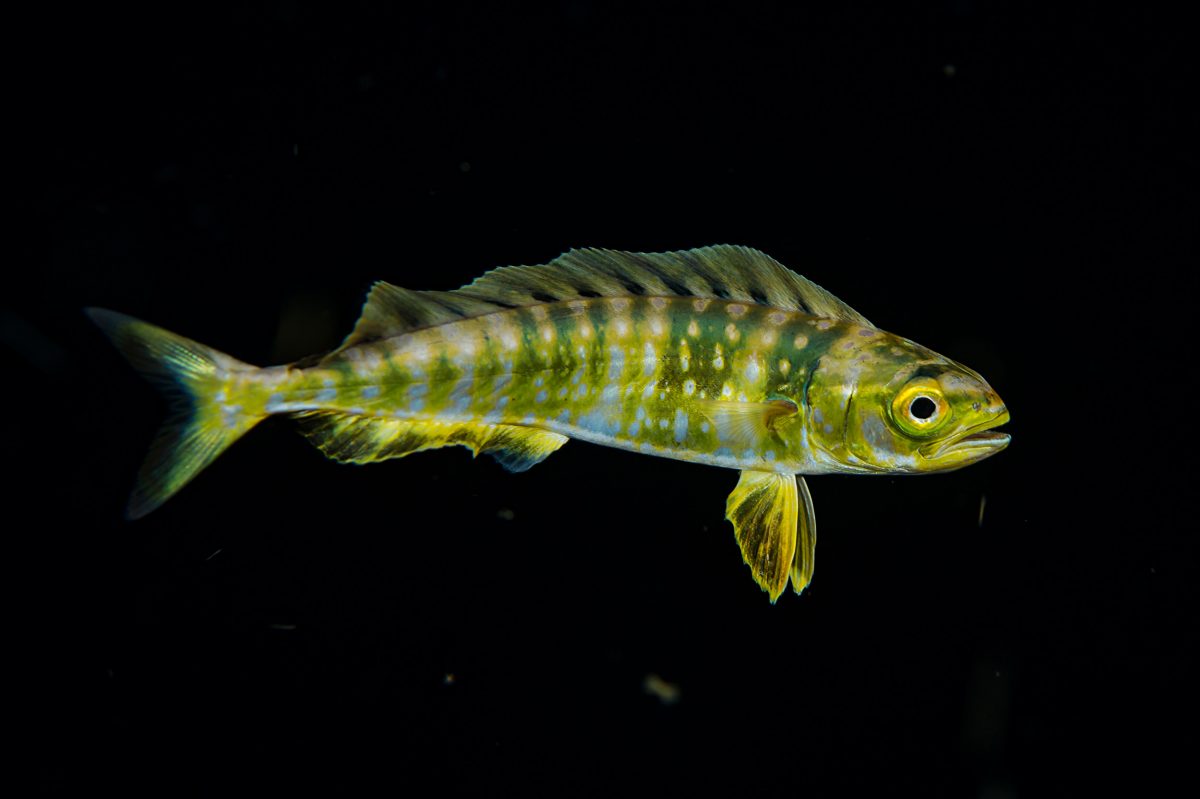 This juvenile dolphinfish or mahi mahi (Coryphaena hippurus) was no bigger than an iPhone. Yet by the time a dolphinfish is four years old, it can be as long as Danny DeVito is tall. 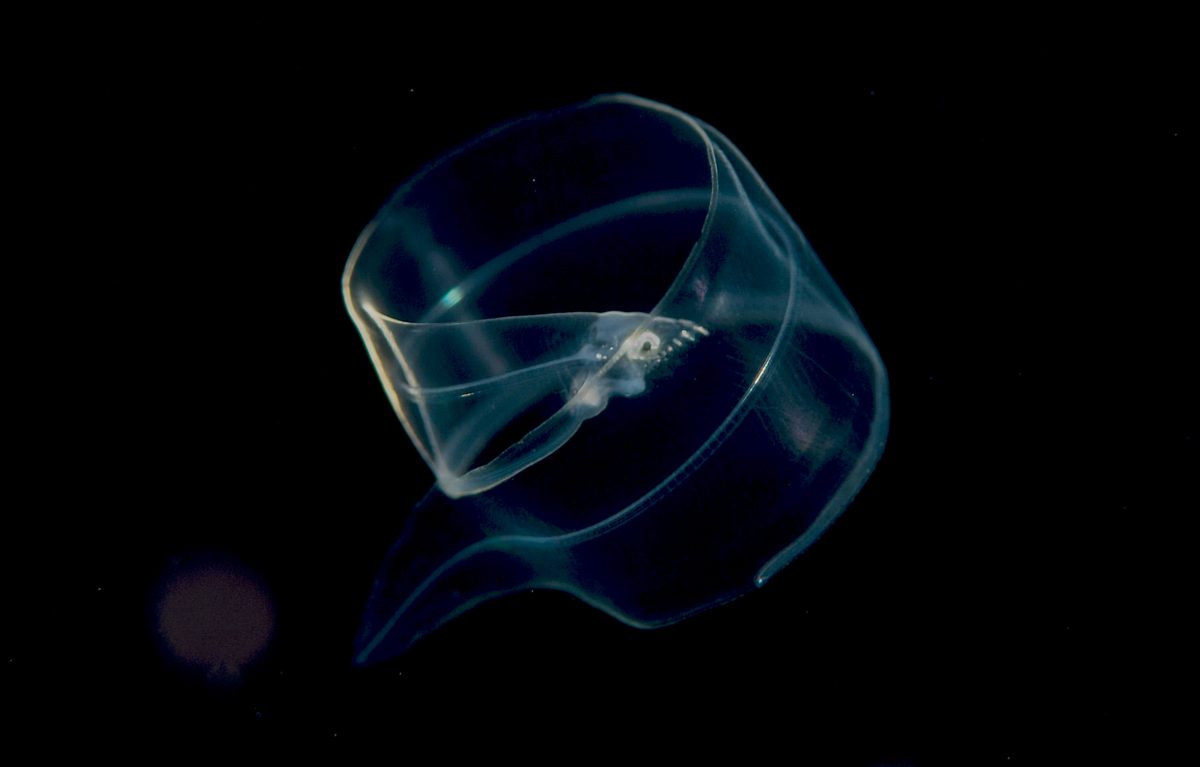 When I shine my light on them, eel larvae (Leptocephalus sp.), like this one found swimming less than a meter below the surface, often curl up and wait, motionless, as I photograph them. 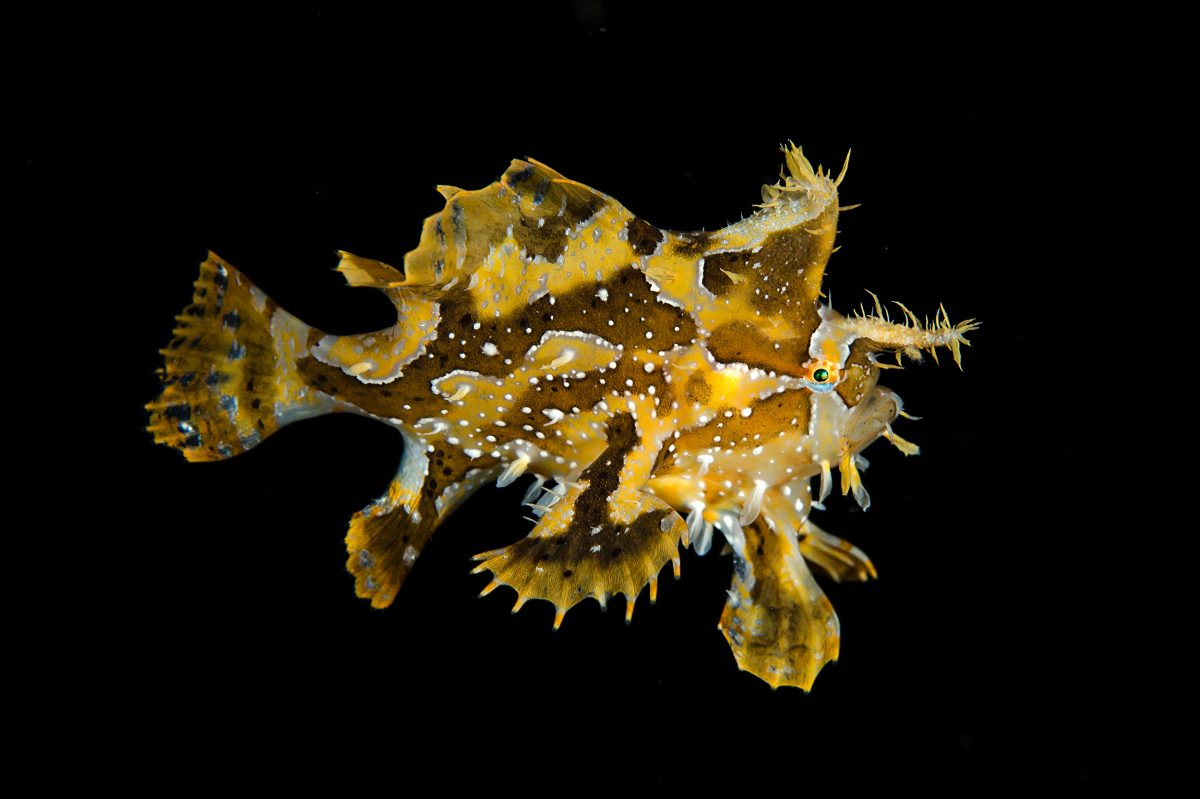 The sargassum fish (Histrio histrio), a type of frogfish, was high on my bucket list for years. To finally photograph one felt like hitting a home run. They grow to about the size of a smartphone and keep well camouflaged in mats of floating sargassum. To find this one, I had to pick apart the seaweed. 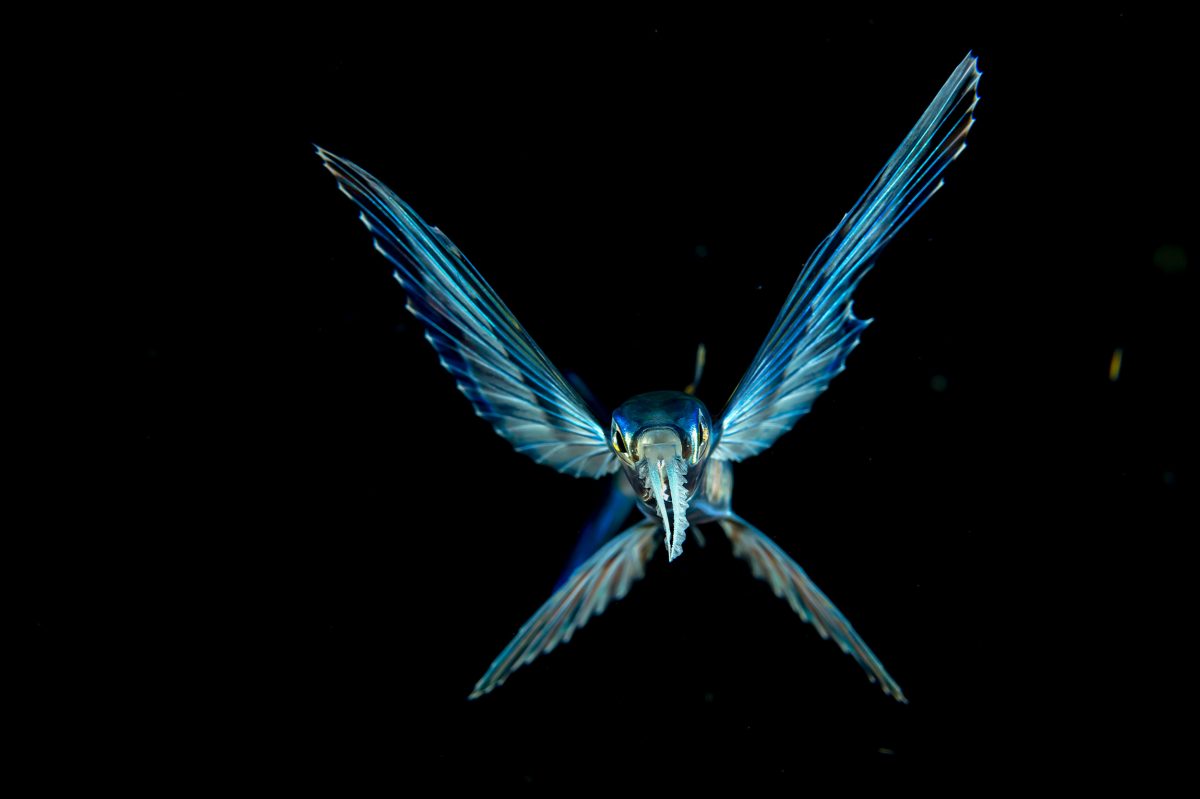 Flying fish seem part fish, part hummingbird, and part dragonfly. They come in multiple colors, and their fins look just like insect wings. During the day, flying fish are highly active, but at night they rest just below the ocean’s surface. 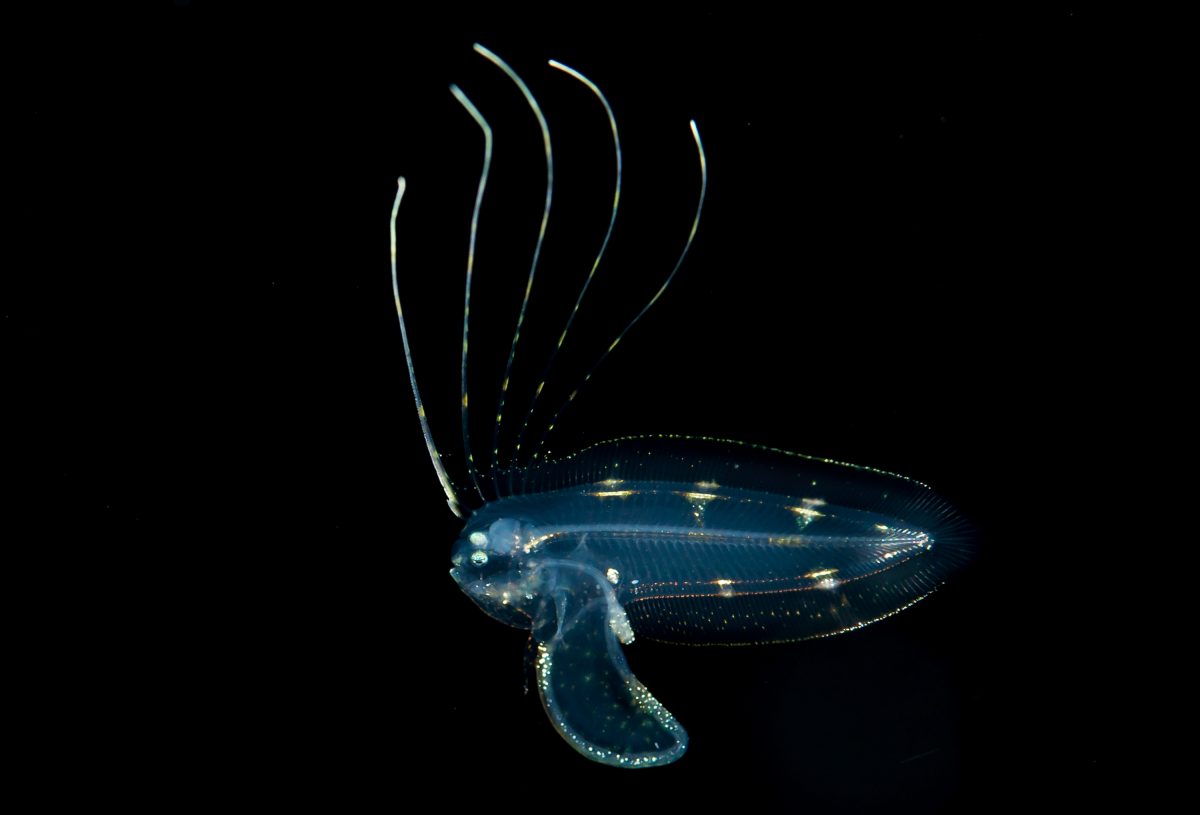 This translucent, dime-sized tonguefish larva (Symphurus sp.) was especially difficult to photograph. In most cases, for every good blackwater photograph, there are hundreds of rejects. 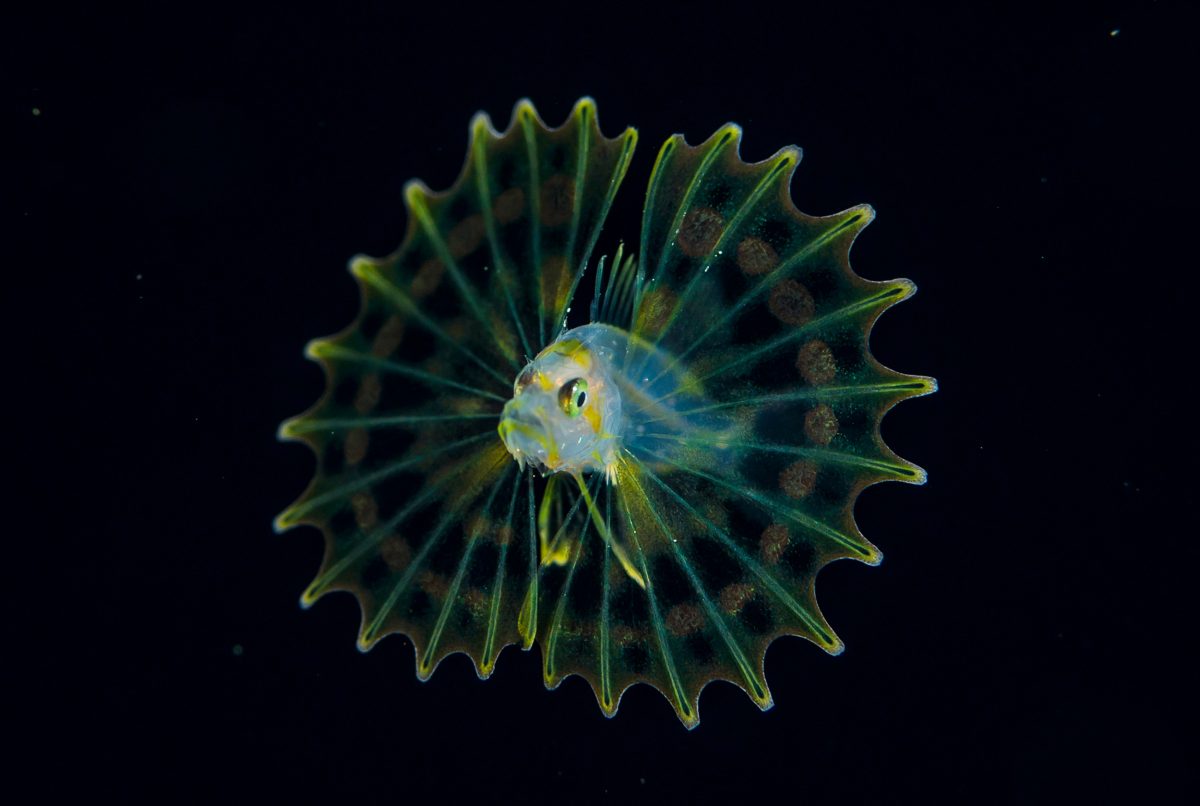 As juveniles, lionfish (Pterois sp.) swim a little like jellyfish, with their fins pulsating open and closed. Lionfish originate in the Indo-Pacific but have become invasive in the western Atlantic, encroaching on the food and habitat of native fish. This one was about the size of a nickel and may grow bigger than a football. 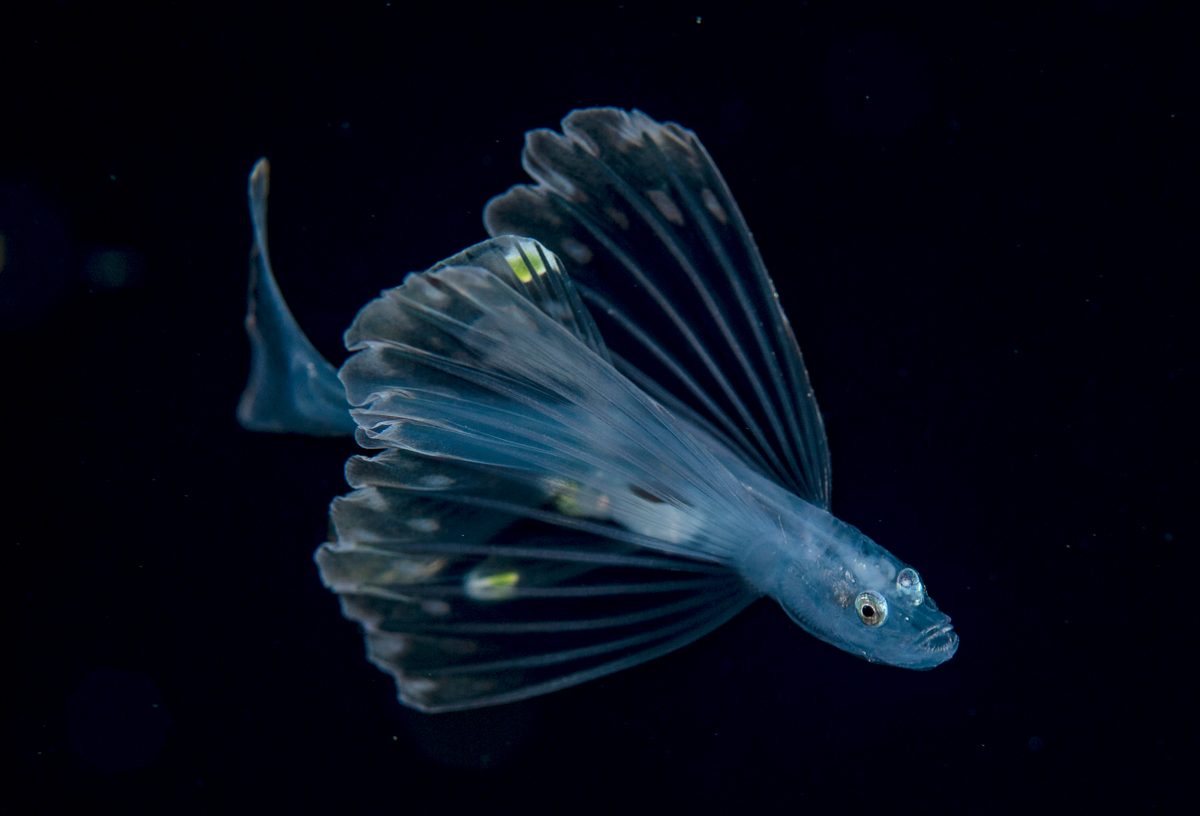 I found this juvenile tripod fish (Bathypterois sp.), the size of a AA battery, drifting far offshore, late at night. As an adult, this bizarre fish can be found living in extreme depths exceeding four and a half kilometers—to see one at the surface was incredible. 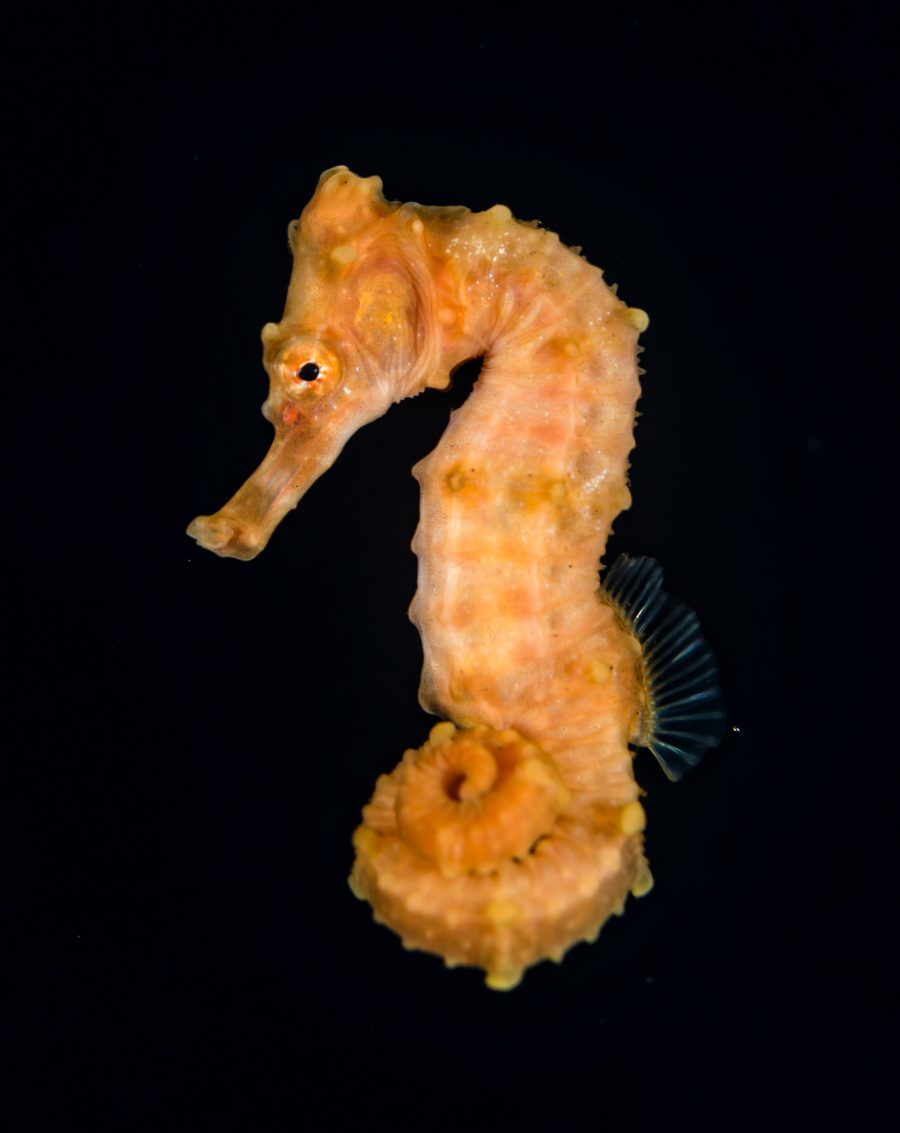 I make an effort to not touch my subjects, but this slender seahorse (Hippocampus reidi)—the first I’ve seen—charmed me when it wrapped its tail around my finger at one point. The other blackwater photographers and I work as quickly as possible, so that everyone has an opportunity to take photographs and to avoid stressing our subjects. 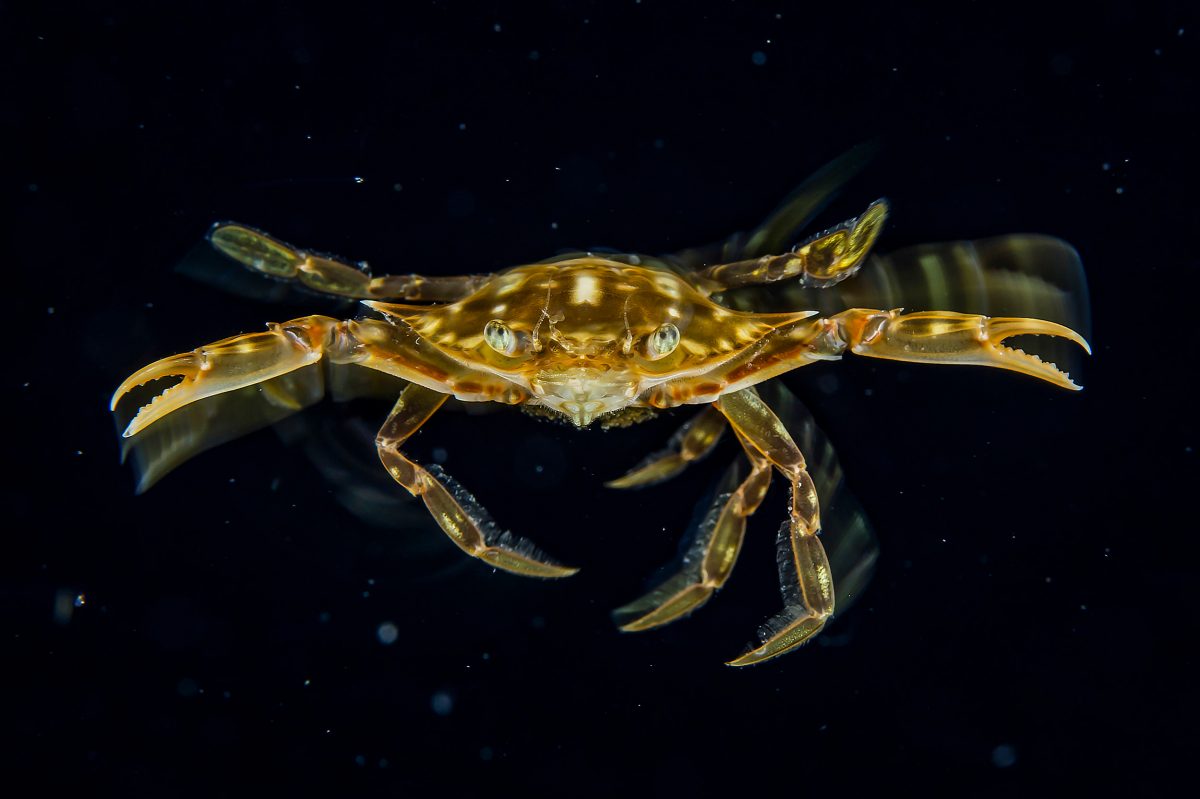 I used a slow shutter speed to give this photo of an unidentified pelagic crab, about the size of a silver dollar, a sense of movement. To me, she—I know it’s a she because of the eggs just visible on her underside—looks like a cute space monster. 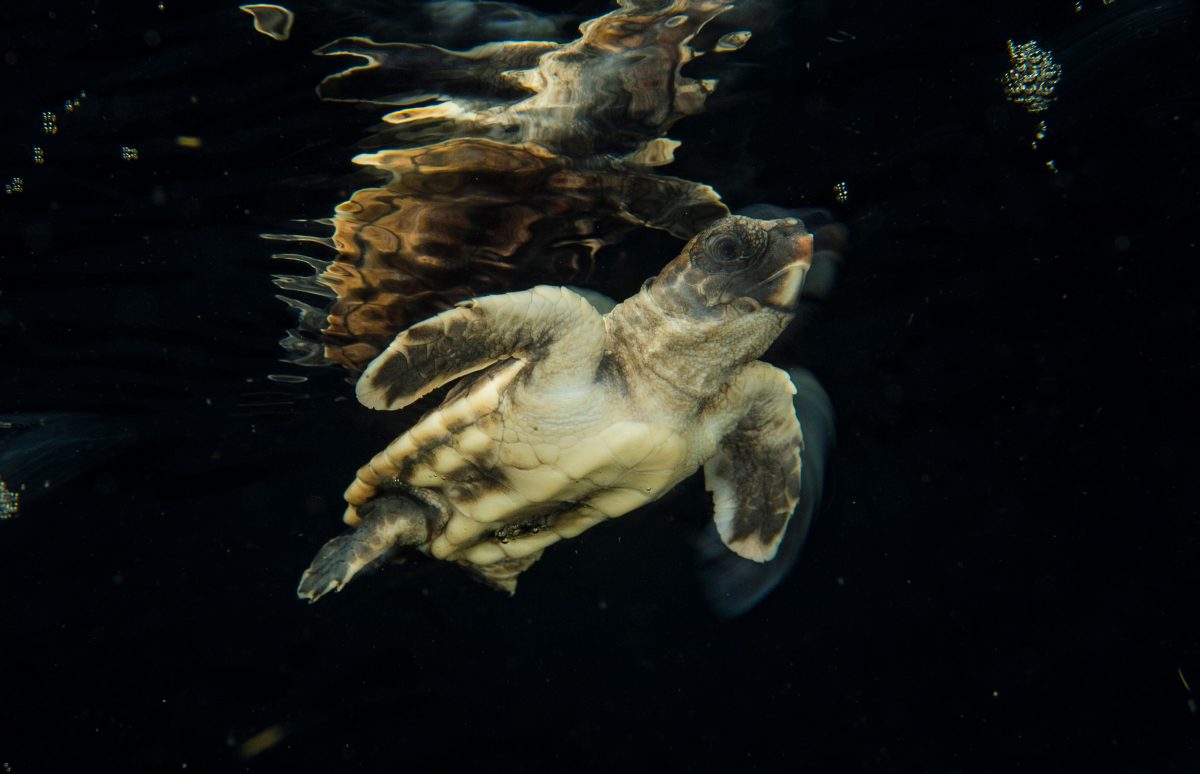 Each year, loggerhead turtles (Caretta caretta) build as many as 67,000 nests along Florida’s beaches, and the hatchlings disperse into the Atlantic to spend their lives at sea. This is the only hatchling I’ve encountered during a blackwater dive; if it can avoid predators and fishing nets, it may grow to 200 kilograms and live more than 65 years.