Humpback bubbles are beautiful, but they’re also useful as tools for feeding, defense, and perhaps even foreplay. Photo by Doug Perrine

On a breezy winter day in Hawai‘i, a team of researchers from Whale Trust Maui watched as a group of humpback whales cavorted around their boat. The wind-rippled ocean surface distorted the view through the ocean–air interface, but one whale repeatedly swished its fins at the surface to produce a vortex that flattened the chop, creating a smooth spot where it placed its eye to look up at the scientists. Photographer and researcher Flip Nicklin, having never seen vortices used in this way, dubbed them “whale windows.” At the end of the encounter, the whale used a different method to construct the window—it blew a perfect air ring from its blowhole, much like a smoker puffs a smoke ring, which again smoothed the surface. Then, as before, the whale turned its head and looked up, meeting the researcher’s eye. Was the whale using a bubble as a tool?

When primatologist Jane Goodall informed her mentor, anthropologist Louis Leakey, that she had observed a chimpanzee utilizing grass blades to extract termites from their mounds, he famously replied “now we must redefine tool, redefine man, or accept chimpanzees as human.” Prior to Goodall’s 1960 observation, tool use had been considered a sharp line demarcating humans from animals. Since that time, reports have emerged of tool use by birds, fish, reptiles, insects, crustaceans, cephalopods, and mammals, including dolphins and whales.

Just what defines a tool has nuance, but it’s generally agreed that it is a physical object other than the animal’s own body that is manipulated or oriented to affect something in the animal’s environment. Studies over the past few decades suggest that water, like a spitting archerfish’s jet of water, and air, like a humpback’s bubbles, can be tools, too.

The first bubbles to be accepted as tools by scientists, back in 1989, were the spiral bubble nets deployed by humpback whales to corral and concentrate small fish or invertebrates.

Fred Sharpe, head of the Alaska Whale Foundation and a researcher who’s studied bubble-net feeding behavior for over two decades, says that humpbacks release bubbles in many other contexts, too, including as social signals such as when a male humpback blows a giant blast of air out of his mouth to intimidate a rival. “Technically,” he says, “that [bubble] is kind of a tool.” And Meagan Jones Gray, researcher and executive director at Whale Trust Maui, notes that bubbles are used on the breeding and feeding grounds in multiple ways by multiple individuals, including in male–male and male–female interactions. “Bubble use is complex,” she says.

In over three decades of observing and photographing humpbacks, and participating in research projects, I’ve also observed these creative and adaptive whales using bubbles in various ways in different situations—some of which were previously unreported. I’m tempted to describe the air in a humpback’s lungs as a Swiss army knife because I’ve seen whales do so many different things with it. It is not actually a tool collection though, but a storehouse of raw construction material with which the whale can fashion a variety of tools. Lacking free fingers and opposable thumbs, whales are unable to create and use tools in the same way as humans, but reveal their intelligence through the manner in which they utilize other body parts for tool production and use.

In the first photo, a group of humpback whales surfaces in the middle of a bubble net in Alaska. Mouths agape, the whales gorge on the herring trapped inside the spiral curtain of bubbles. To create the wall of bubbles, one whale—or occasionally two or even three—circles a school of fish in ever-tightening loops while releasing a steady stream of air. (The second photo gives an aerial view of a bubble net made by a different group of whales.) As the bubble net is created, other members of the group perform specialized herding maneuvers that increase the efficiency of the prey capture. 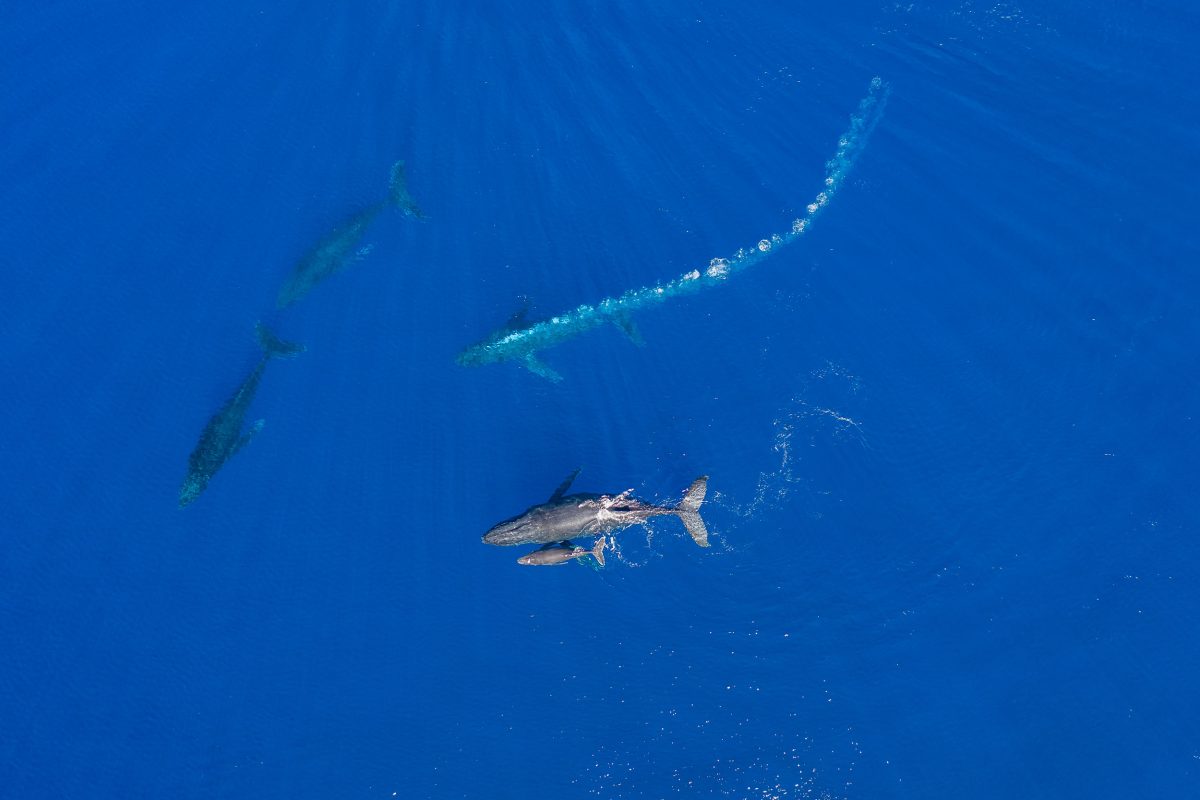 In this encounter, I watched a female swim with her young calf (lower center) and a male escort off her right side. As two male challengers moved in to intercept her, the escort charged between the female and the two challengers while blowing a massive bubble trail. Perhaps the bubbles served to partially obscure the female from the challengers or to visually disorient them, but they may have also advertised the escort’s dominance and aggression. Sometimes a challenger responds to such an encounter with a bubble trail of its own. Aggressive males may also release blasts of air bubbles from the mouth.

Christine Gabriele, a researcher with the Hawai‘i Marine Mammal Consortium, agrees that this use of bubbles could be considered use of a tool. “Absolutely,” she says. “They’ve created a structure out of nothing and are using it in a particular context for what seems to be a purpose that is clear to us.” 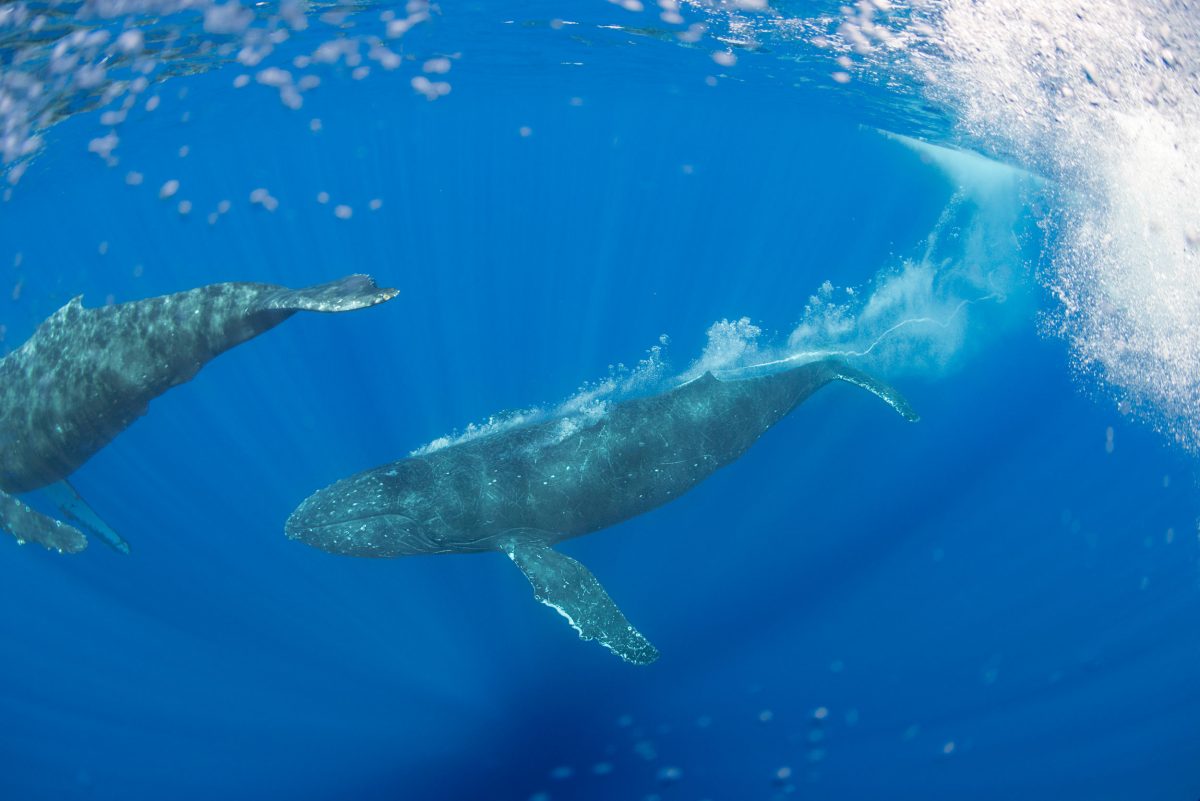 In this underwater view, a male escort blows a bubble stream while following a female with two male challengers in pursuit (out of frame). Such a case is “clearly … an antagonistic signal,” says Sharpe. “He’s saying, Back off or I’m gonna wallop you! It’s a tool signaling that you’re willing to escalate or you’re pissed or you’re coming in.” And it’s not an idle threat. Competition between male humpbacks for access to females sometimes leads to injury, and, on the rare occasion, to death. 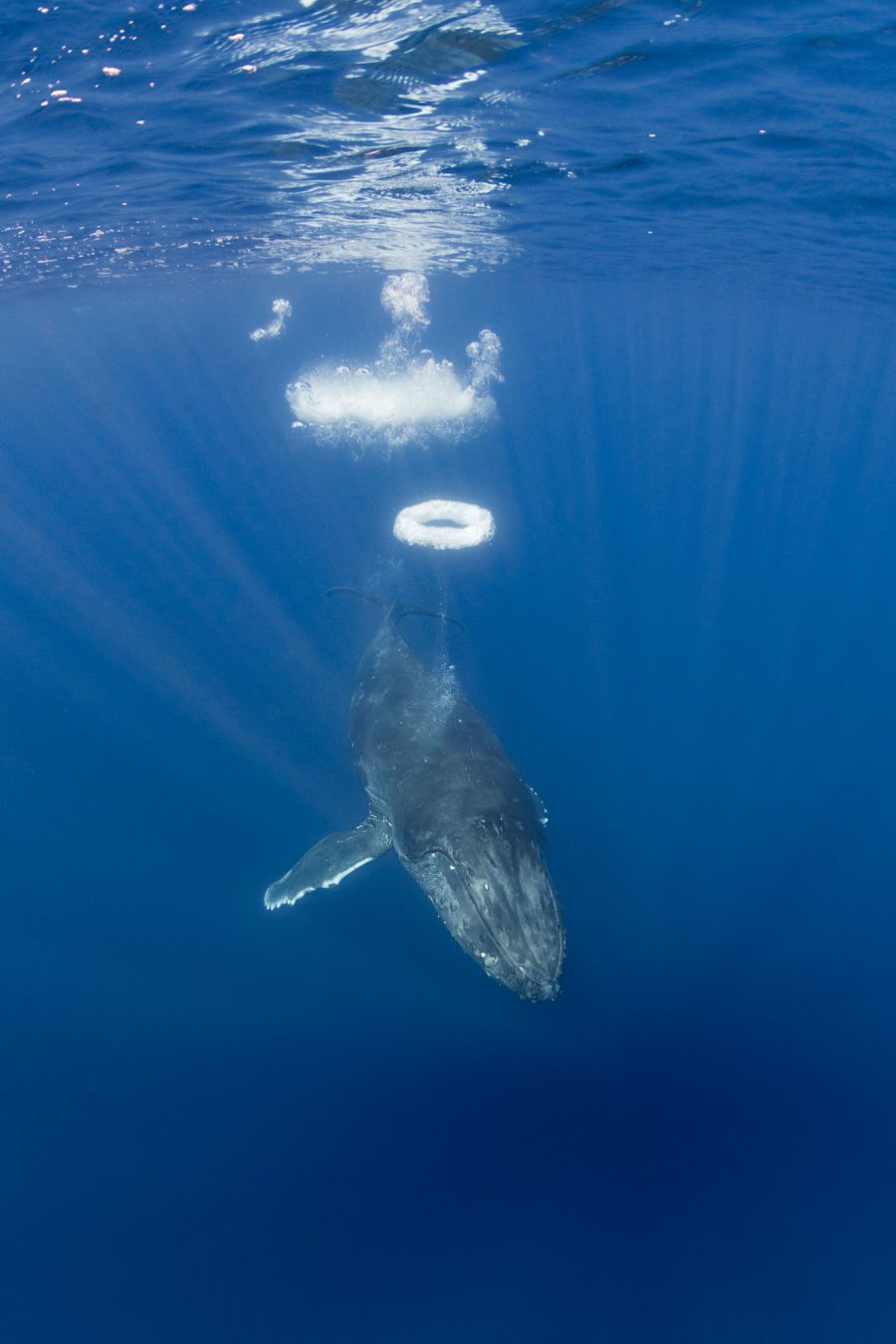 This yearling female humpback approached my boat repeatedly over a period of more than an hour, often blowing sequences of perfectly formed bubble rings. Was she attempting to communicate? Did she want to play? Why did she blow bubble rings only when approaching the boat?

Sharpe notes that in thousands of hours of drone observations of humpbacks interacting only with each other, his pilots have never seen a bubble ring. “Humans trigger this behavior,” he says. “It’s a play object but it also has an uncanny interspecies component to it.” Humpbacks have only rarely been reported making bubble rings in the northern hemisphere—and there are no reports of it in the southern hemisphere. I feel very fortunate to have seen this behavior twice, 19 years apart. 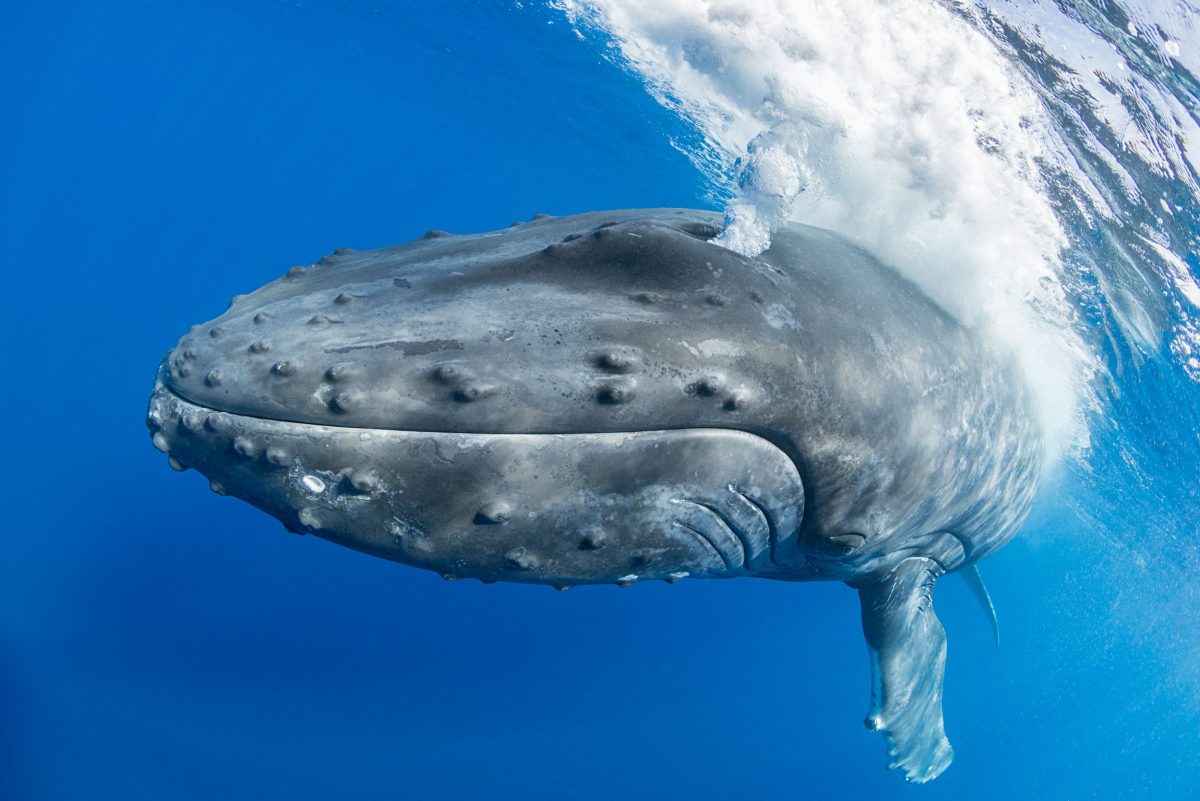 The same yearling female who created the bubble rings also released massive air clouds a couple of times when approaching our boat. Humpbacks are known to release bubble blasts both from their mouths and from their blowholes. However, these displays are usually produced by adult males during competition for a female. Was this loud and forceful exhalation aggression or play?

California State University Channel Islands professor emeritus Rachel Cartwright, who studies humpback whale mothers and calves in Hawai‘i as lead researcher for the Keiki Kohola Project, says that seen from the air, the use of bubbles “seems very orchestrated and purposeful.” Given how often adults use bubbles, she thinks that skill with bubbles would carry an advantage. “And that’s often seen by behavioral ecologists as a justification for the costs of ‘play,’” she says. 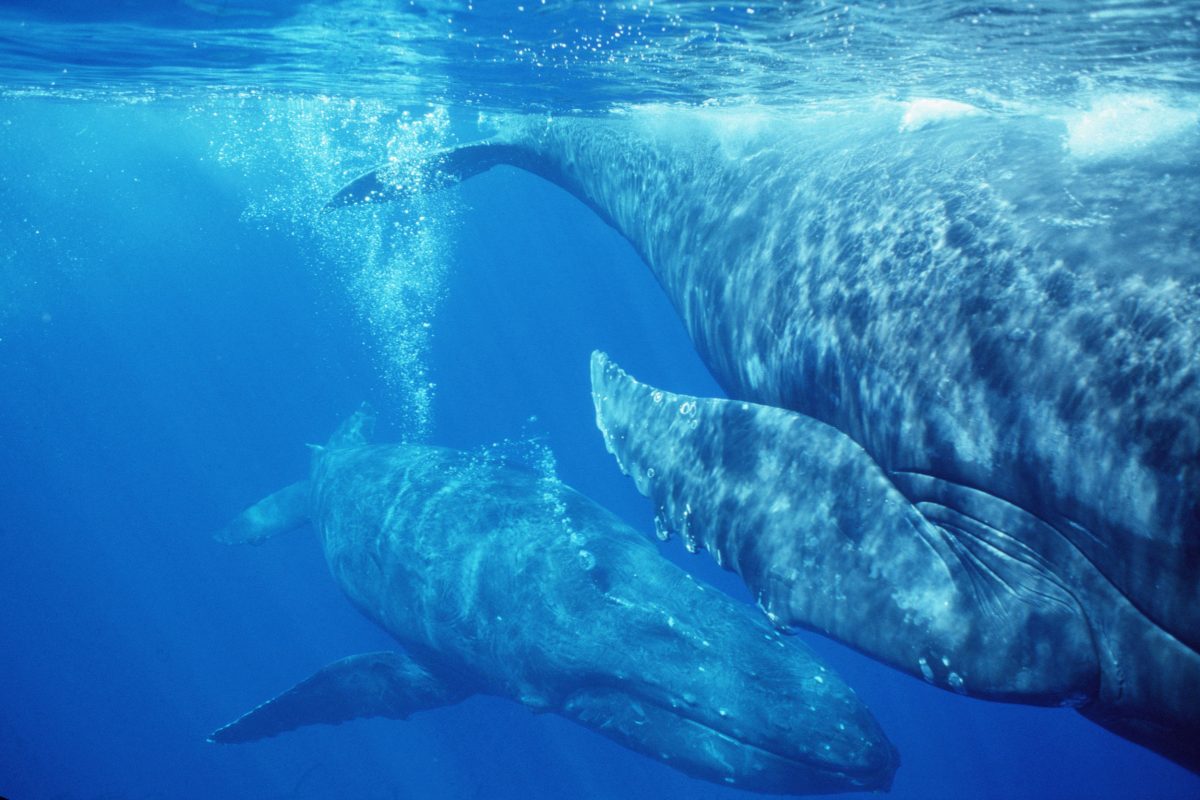 The female on the right of the frame was being followed by two males when she parked herself next to our research vessel. One of the males slowly approached her from behind, and when he was beneath her started to release a slow, thin stream of bubbles that rose up under her genital area as she floated motionless. Whale Trust Maui researchers Gray, Nicklin, and Jim Darling have documented near-identical behaviors. They propose that bubbles could be used in courtship, mating, and/or during the birthing process. Bubbles, for instance, might provide precopulatory stimulation, or, if the female is pregnant, could stimulate the release of birthing hormones such as oxytocin. (Photo taken under NMFS research permit #633 issued to Hawaii Whale Research Foundation.) 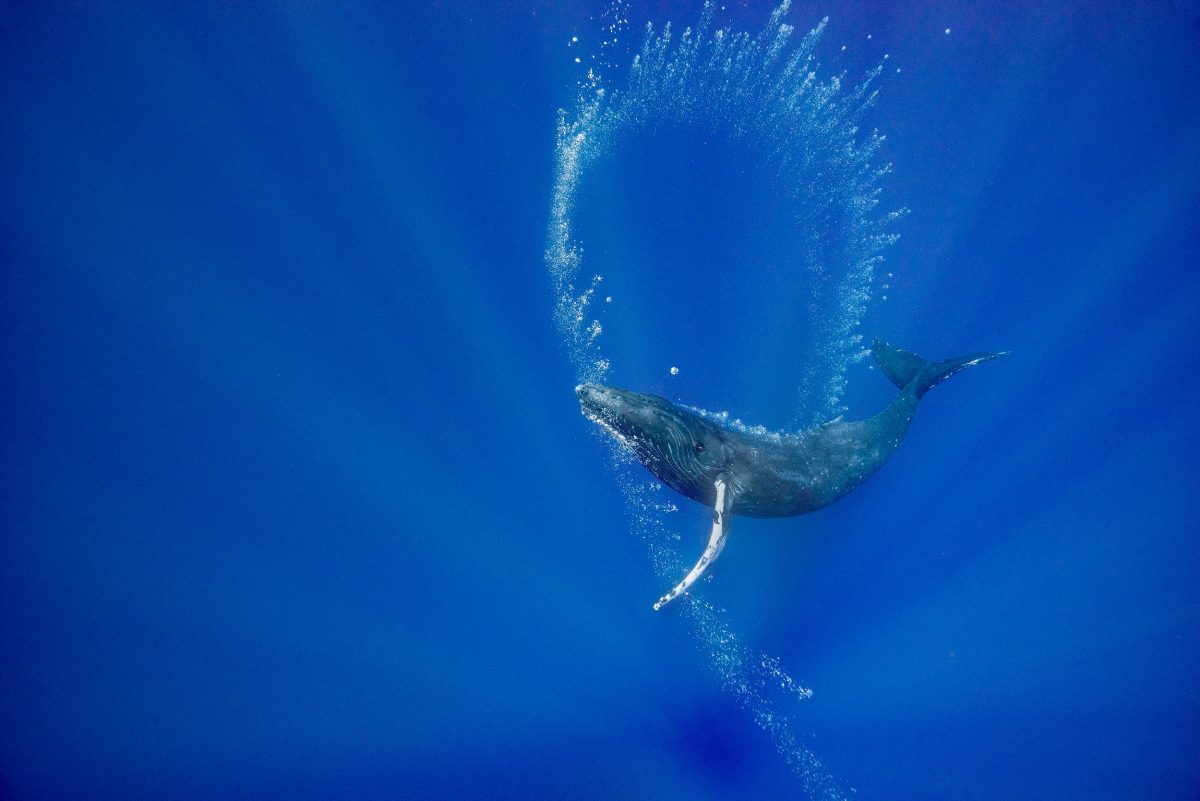 This young female whale approached my boat, then dove and began “drawing” with bubble curtains released in a thin stream from her blowhole. There was no food around and no other whales in sight. She rolled to one side so that she could look upward to admire her handiwork. Was she practicing making bubble structures that could be useful tools on the feeding grounds, or was she just enjoying the visual beauty of the scintillating bubble spirals? Was it art for art’s sake? Certainly, other animals, including captive dolphins, sea lions, rhinos, and elephants have learned to paint with brushes, and both wild bowerbirds and pufferfish produce visual art to impress potential mates.

Play in animals often facilitates the practice of behaviors that are developed into useful survival skills later in life. Perhaps this young whale’s play with bubble production was an adaptive behavior as bubble-blowing skills will be useful to her as an adult. I like to think that she may have just been satisfying a creative urge and enjoying her display as much as I did.