When the crude oil tanker Affinity V ran aground and blocked Egypt’s Suez Canal in August 2022, it seemed like an alarming repeat of last year’s Ever Given fiasco. In March 2021, the gargantuan container ship Ever Given lodged itself across the very same part of the canal and remained there for six days, causing a 350-vessel traffic jam and obstructing billions of dollars in trade. The ship that launched 1,000 memes became a pandemic-era icon and, in the process, revealed the fragility of global supply chains.

But the Suez Canal’s vulnerability to disruption was well known to those in the shipping biz. The waterway is a choke point on the primary maritime route between Asia and Europe. Vessels traveling the main shipping routes around the globe navigate other constrained passages, too: the Panama Canal, between the Atlantic and Pacific Oceans, and the Strait of Malacca, connecting the South China Sea to the Indian Ocean, among many others. “They are all vulnerable to some extent,” says Jean-Paul Rodrigue, a transportation geographer at Hofstra University in New York and author of a recent study that examines pandemic-related problems in container shipping around the globe. 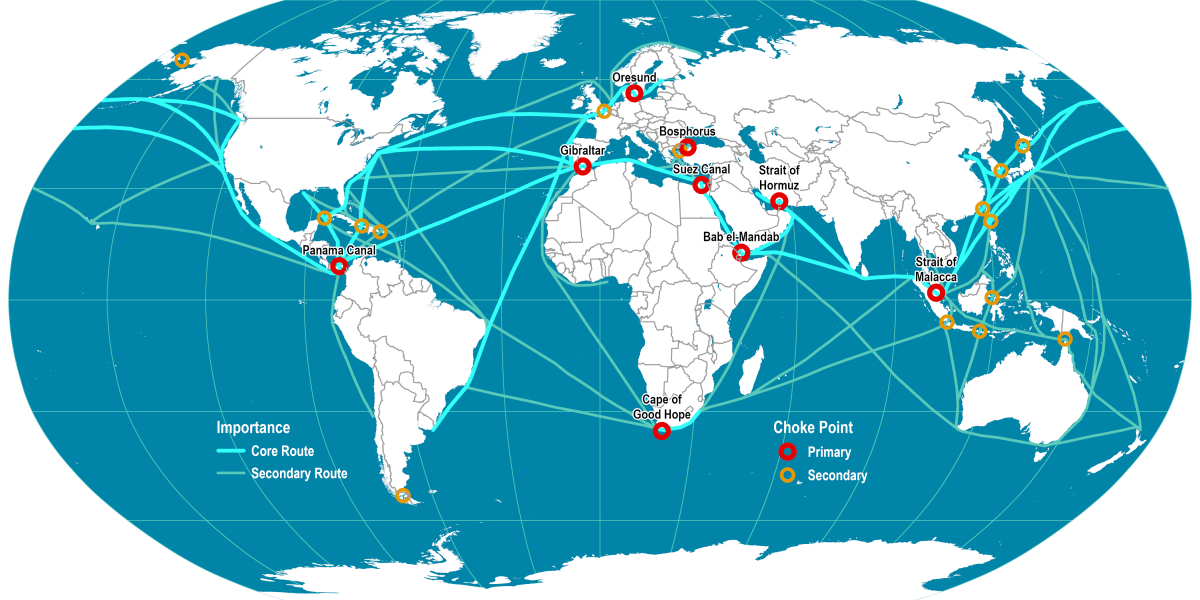 Canals, straits, and ports can handle only so many vessels at a time. Delays are common, but when traffic comes to a standstill, as it did behind the Ever Given in 2021, supply chain disruptions compound worldwide.

At just 205 meters wide—roughly the width of three football fields—the Suez Canal is like the narrow neck of a wine bottle. Roughly 18,000 vessels use the waterway each year, organized into northbound and southbound convoys that take turns passing through the canal’s narrowest sections. The Ever Given, lodged in a single-lane stretch, acted like a jammed cork.

Although the Strait of Malacca is also a bottleneck, it has much greater maneuvering room, more like a wide-mouth pickle jar. Vessels make 60,000 trips through the passage annually, accounting for almost one-third of global trade, and the strait has capacity for many more.

As bottlenecks go, the Panama Canal is a glass ketchup bottle. The waterway is shorter and wider than the Suez Canal, making it less vulnerable to disruption. But ships ascend or descend a series of locks, a protracted process like ketchup pouring glacially onto fries. About 14,000 vessels currently use the Panama Canal each year, but climate change could curb capacity. The locks operate using water from Gatun Lake, and in years with little rain, low water prevents larger, more heavily laden vessels from navigating the canal.

Demand for passage through the Panama and Suez Canals is booming, and ships must book their transit in advance or risk waiting weeks for a spot. Since the Ever Given was dislodged in 2021, traffic through the Suez Canal has grown substantially. The authority that manages the canal recently reported a record US $7-billion in annual revenue and commenced a $191-million expansion that includes widening part of the single-lane stretch where the Ever Given and the Affinity V ran aground. And an investment in two new tugboats has already paid off: the Affinity V resumed its journey after just five hours, barely slowing the flow.