In Pakistan’s Indus Delta, crabs have become a new form of currency. Photo by Muhammad Umar

Treading toward the banks of Pakistan’s Indus River Delta, I see the landscape gradually turn from green to barren and the soil become darker and damp—evidence of the sea encroaching on what was once fertile land.

Originating in Tibet, the 2,880-kilometer-long Indus River finally ends at the Arabian Sea. Its fan-shaped delta forms a complex system of islands, marshes, mudflats, mangroves, and creeks here. But the construction of various dams on the river since 1932 has starved the delta’s zigzagged creeks of fresh water and new sediment. As a result, the world’s fifth-largest delta has shrunk from 6,200 to 1,200 square kilometers. Its 17 major creeks are now choked with salty water, and the land around them is eroding.

In turn, crops such as rice, wheat, and maize, and orchards of banana, papaya, and guava have failed; fish populations have plummeted; livestock has died; people have been displaced; and drinking water has become scarce.

“We are thirsty even at the bank of the mighty River Indus,” an old man near Sajan Wari village complains, gesturing to the silty waters.

In this depleted environment, locals struggle to make a living. But rectangular ponds carved out of the mud, bleached by sunlight at the shores of the lower delta, now brim with hope—googly-eyed, pincer-bearing hope.

WWF-Pakistan, a chapter of the World Wide Fund for Nature, introduced small-scale crab fattening ponds to the area in 2013, as part of a project designed to help communities adapt to climate change. The organization facilitated the construction of 22 ponds, and the concept took off like an algal bloom; now an estimated 150 to 200 small ponds dot the landscape around the coastal communities of Keti Bunder and Kharo Chan. Farmers stock the ponds with immature mud crabs, feed them, and keep them in captivity until they’ve reached full size and are ready to take to market. The long-term viability and sustainability of the ponds may be murky, but for now, locals embrace their mud crabs (Scylla serrata) as the key to survival. 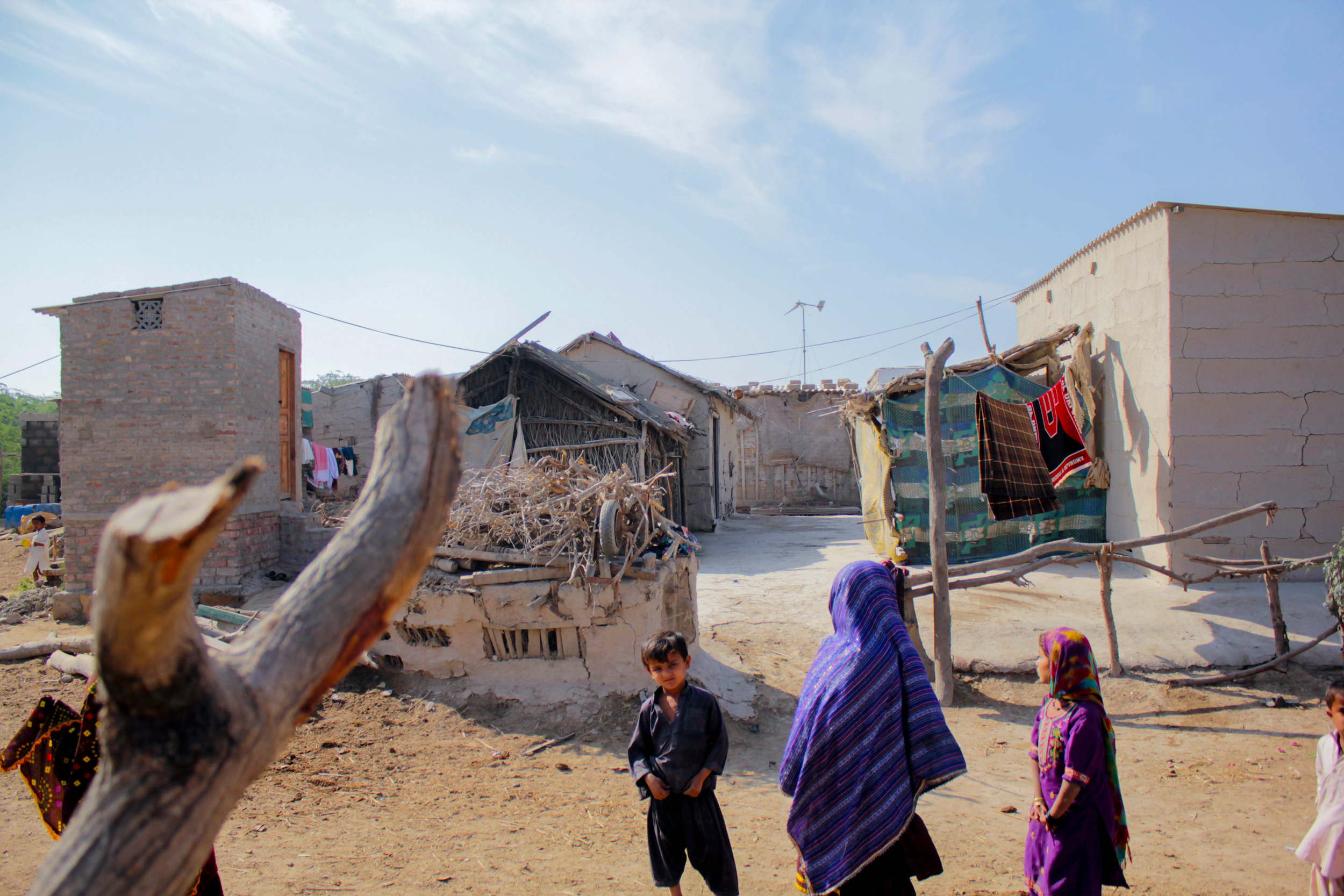 WWF-Pakistan focused its efforts on impoverished coastal villages in the region around Kharo Chan and the town of Keti Bunder in the Thatta District, a flat and muddy region with concrete homes and wooden shacks, roughly 180 kilometers from the port city of Karachi. The mangrove forest in the area is native habitat for the mud crab. 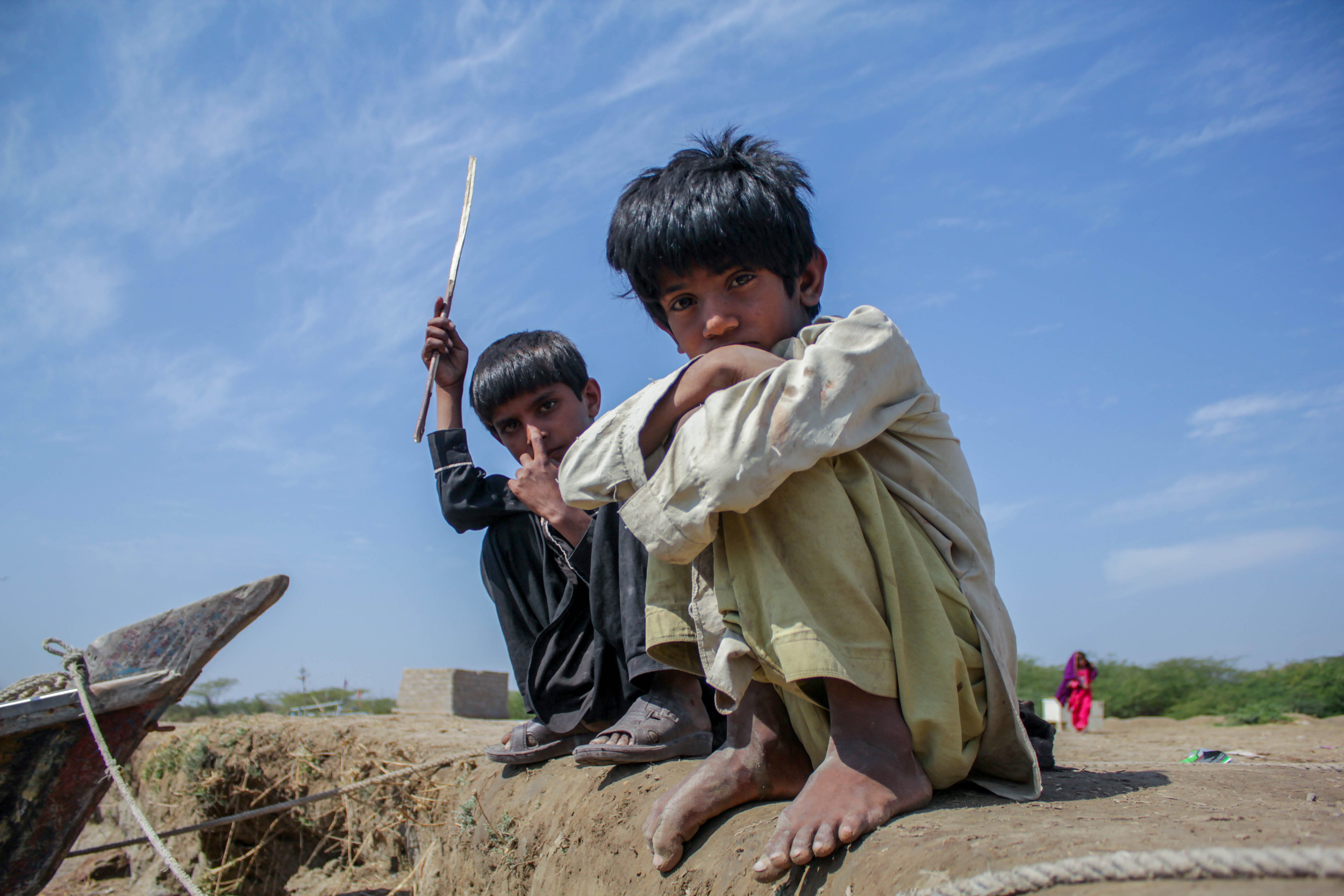 As the Indus Delta has been choked of fresh water, making agriculture nearly impossible, the 2,000 or so households in the Kharo Chan and Keti Bunder region have become almost totally dependent on fishing. 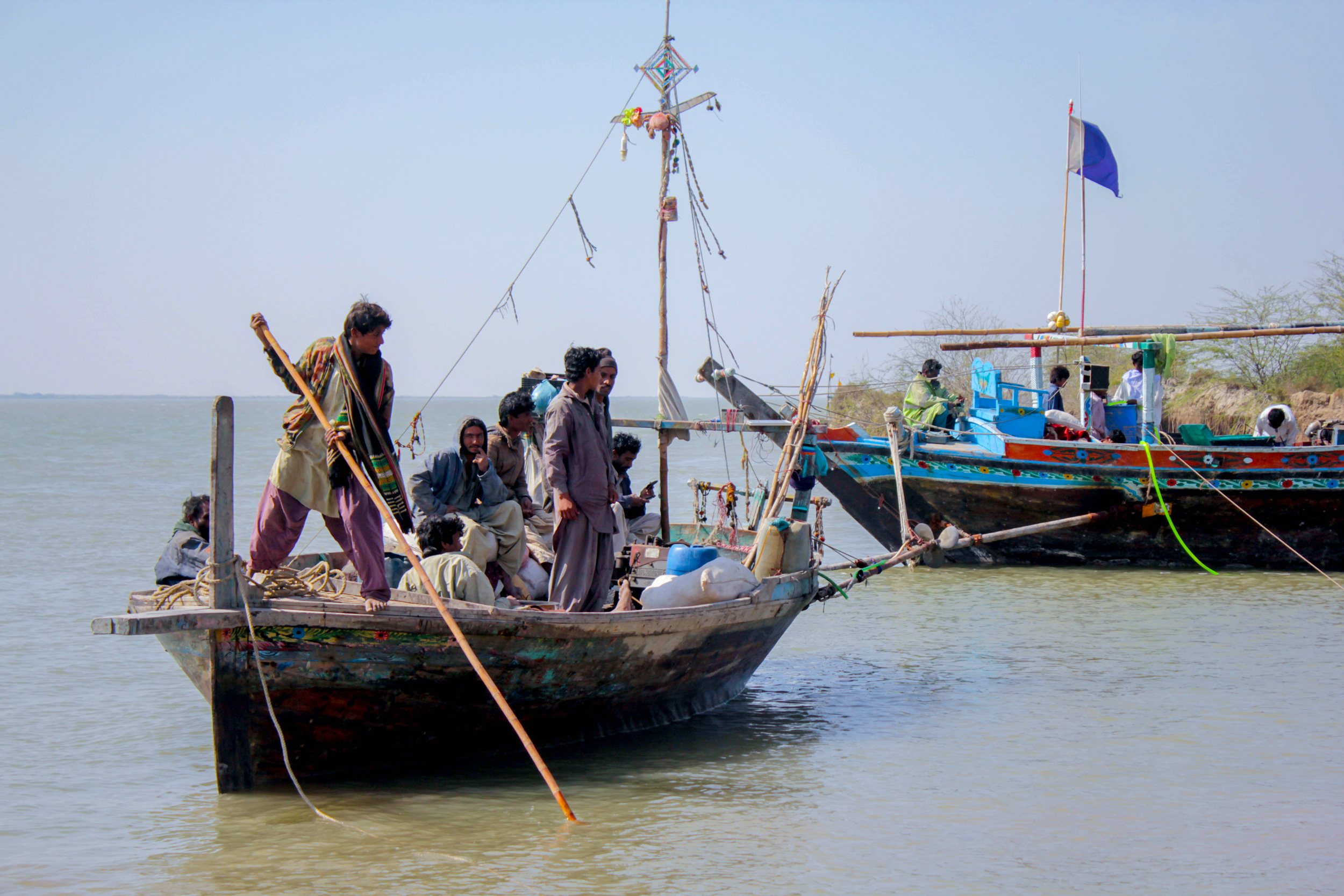 Fishermen in the Indus Delta traditionally targeted catfish, pomfret, barracuda, shad, and shrimp, among others, but catches have declined drastically in recent years, and many fishermen earn less than PKR 100 (US $1) per day. 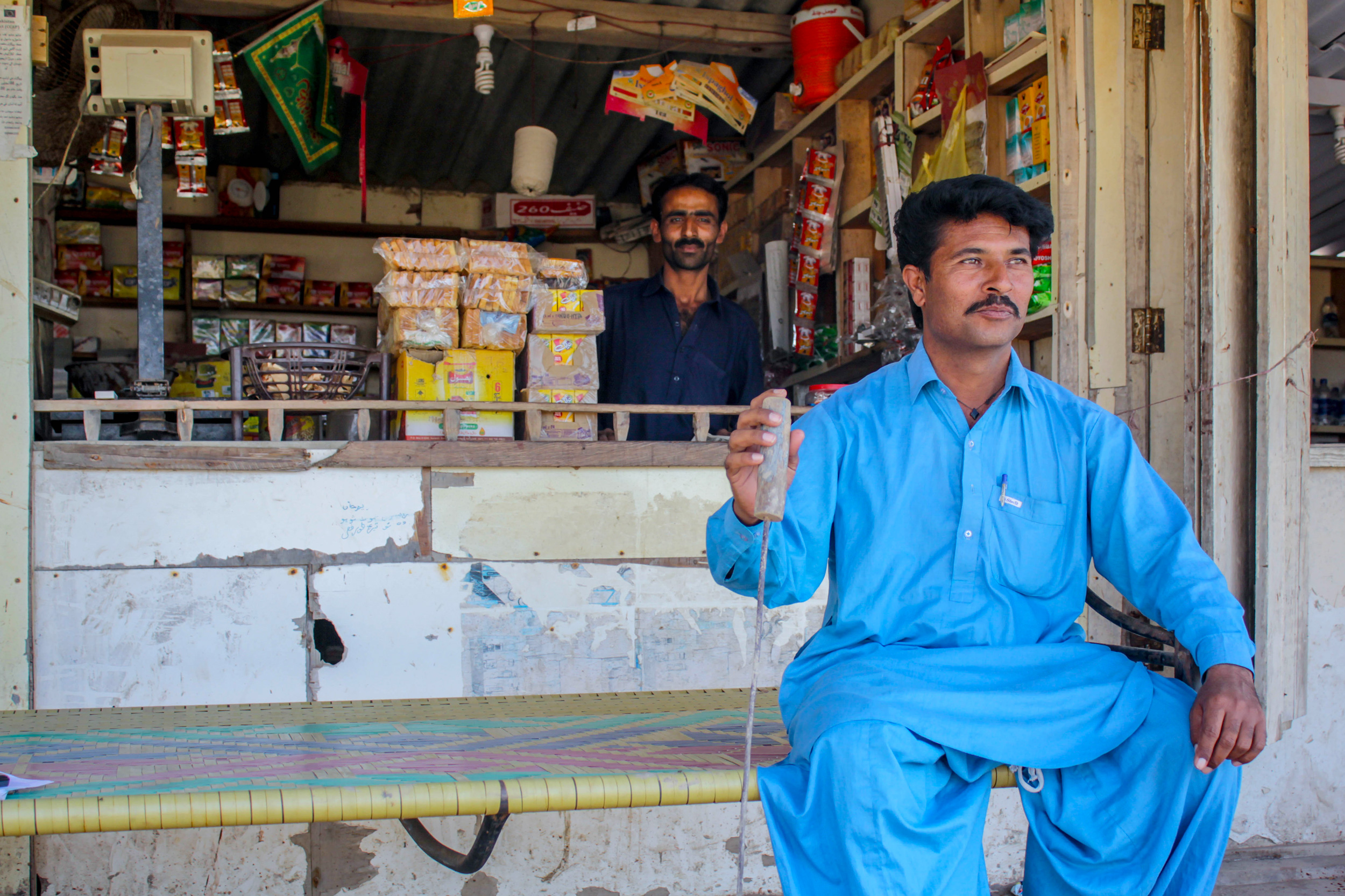 Fishermen in the Indus Delta were once unaware of the economic potential of crabs, which they often captured as by-catch and considered useless, as there’s little local appetite for crabmeat. The money local man Muhammad Saleem (front) made from his crab pond enabled him to build two shops. 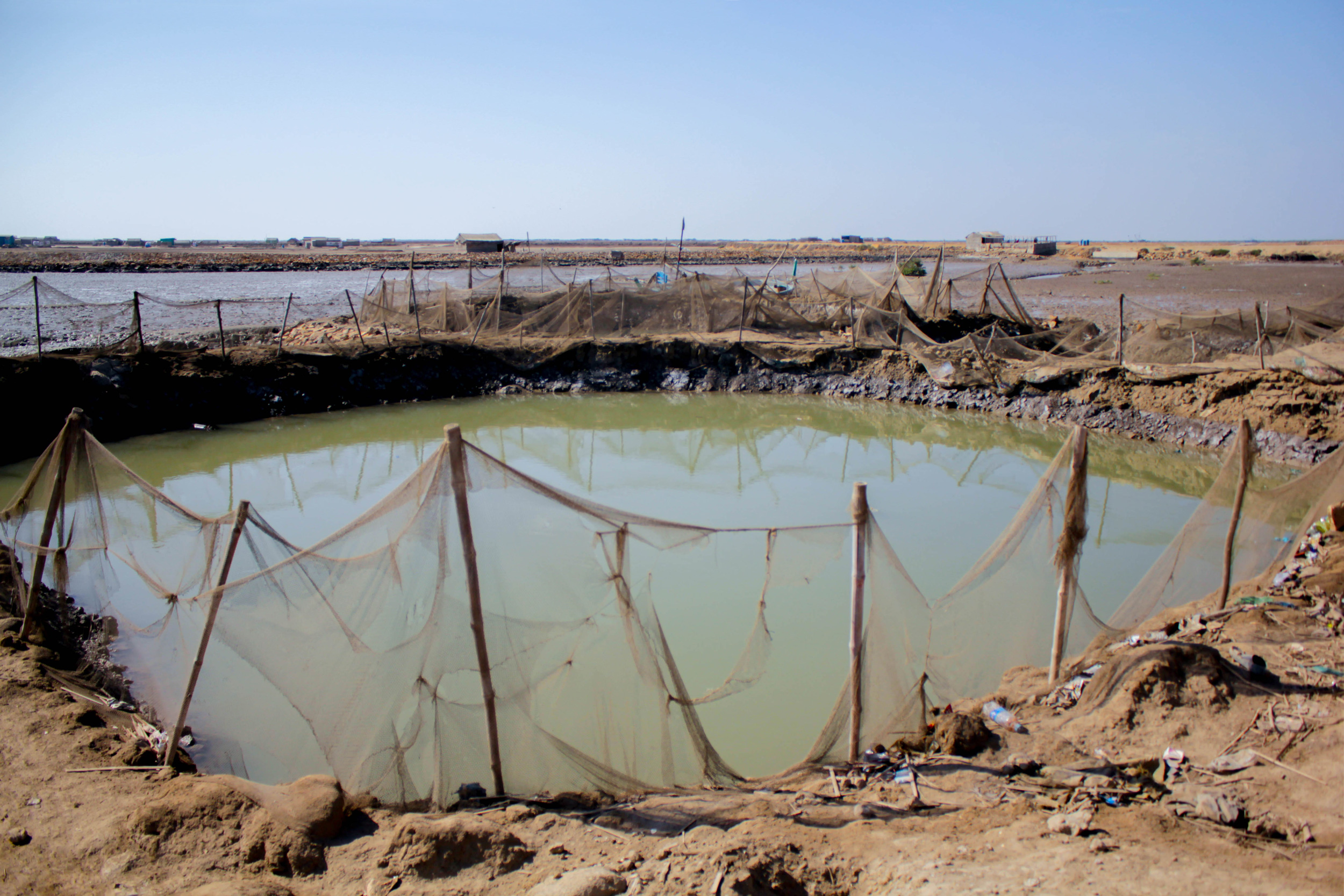 Crab ponds are simple pits, dug into the soft mudflats, ringed with mud walls and bordered with nets. Two plastic pipes (covered with mesh to prevent escapes) allow for water exchange from nearby creeks. 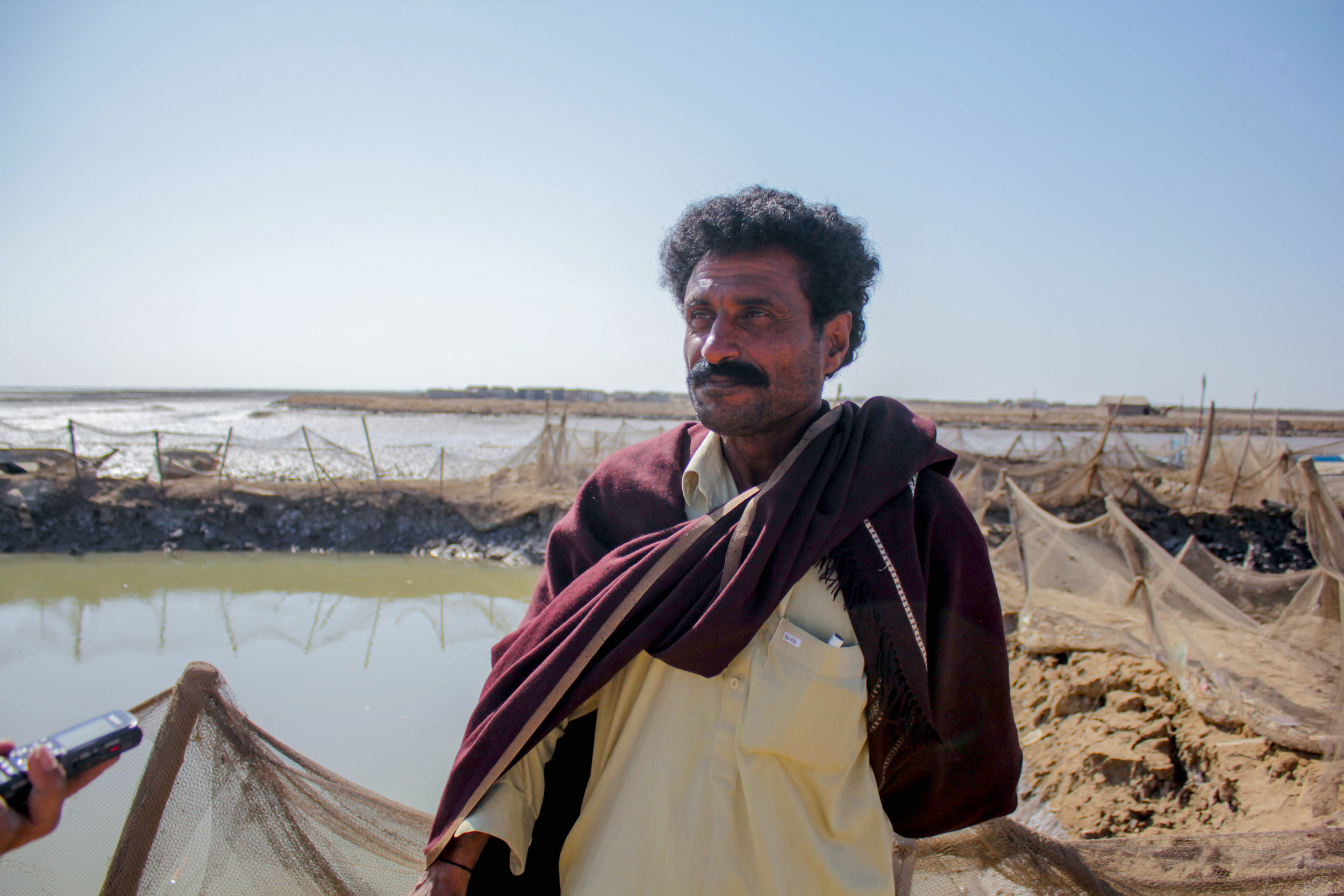 Muhammad Ali is one of the region’s new crab pond owners. Establishing a pond, roughly six by eight meters and 1.5 meters deep, for one family’s use costs around $475 in labor, supplies, and stock. Owners catch some wild juvenile crabs for their ponds and buy more from other fishermen. They fatten them with small silver baitfish—known locally as chodi—until they are fully grown, which typically takes four to six weeks. 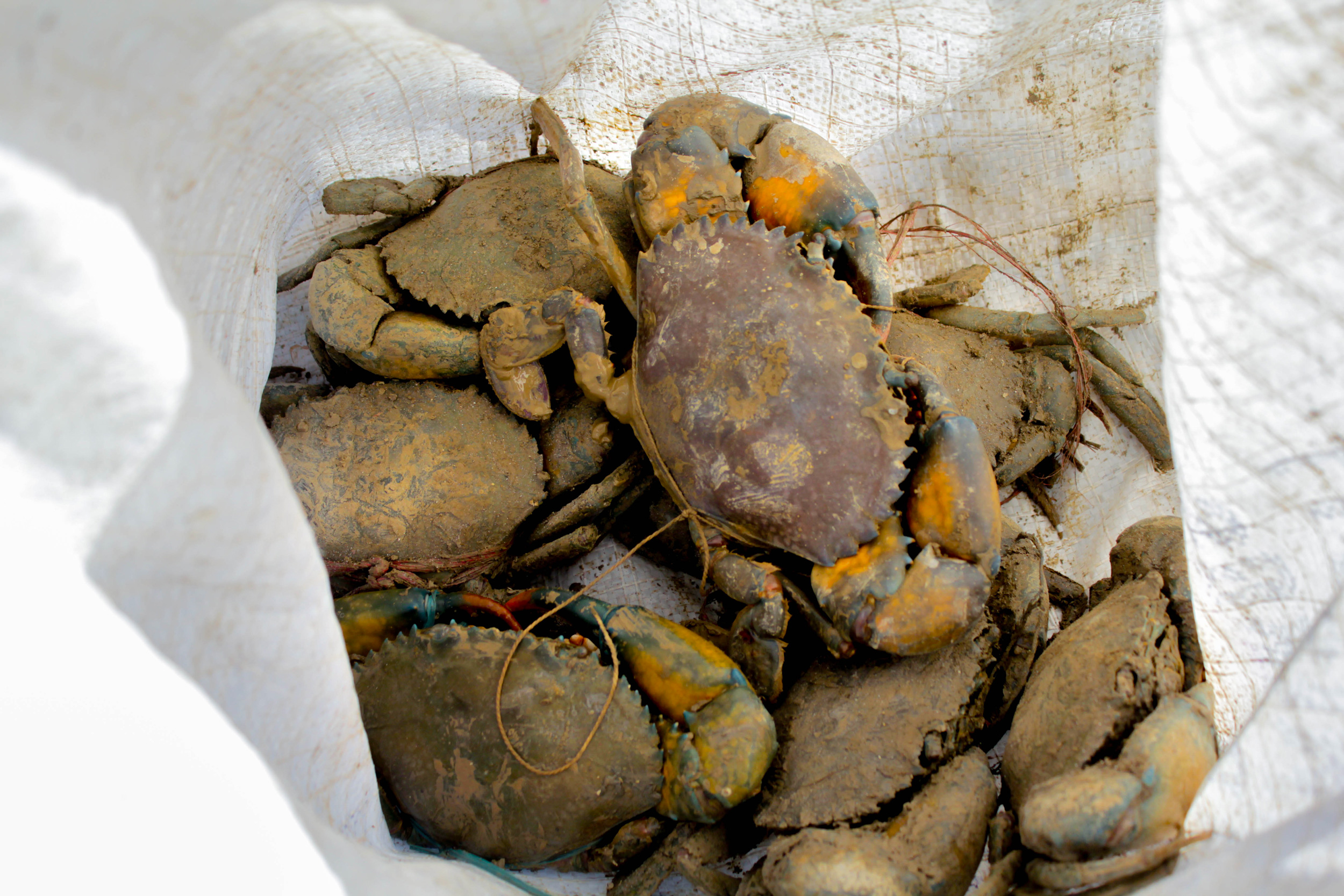 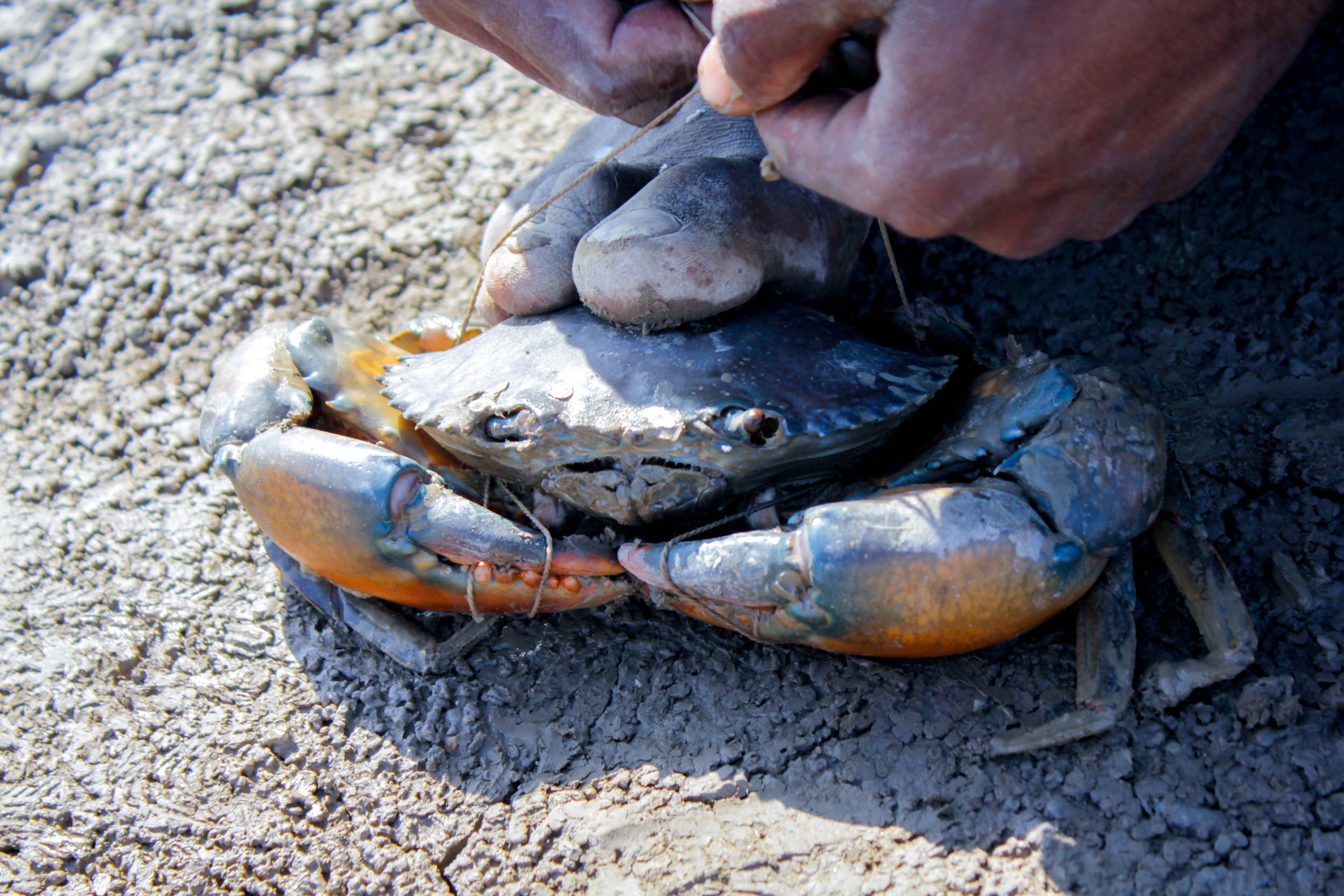 During the peak season (December to February), pond owners sell their complete stock to middlemen, who in turn export the crabs to international markets such as China and countries in Southeast Asia. Throughout the rest of the year, the owners tend to keep a smaller supply of crabs—perhaps 50 or 60—which they harvest occasionally when the need arises. 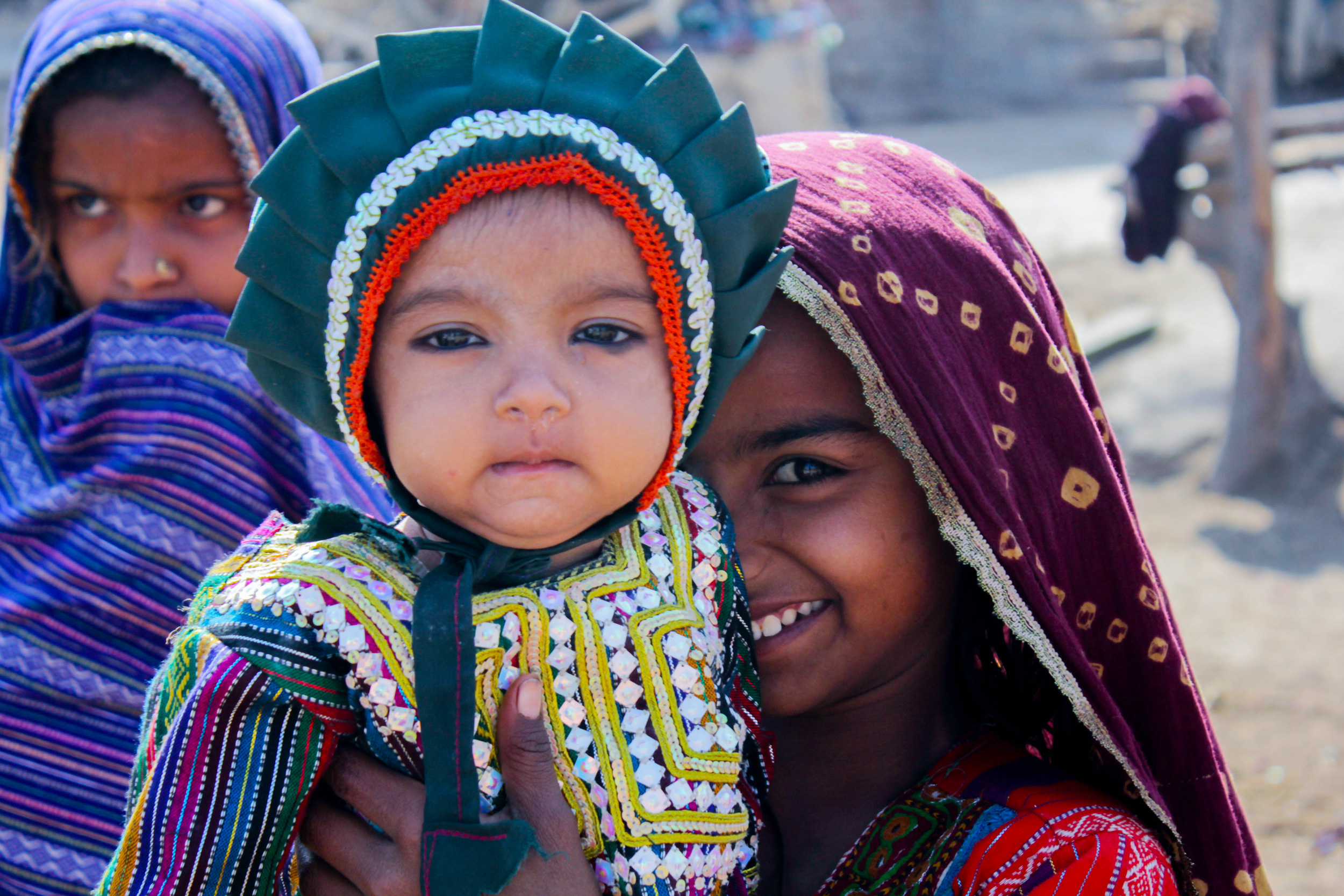 Pond owners consider the mud crabs as good as money in the bank. The simple and lucrative business has helped families reduce their need for loans and enabled them to have funds on demand for equipment repairs, food, and medicine. 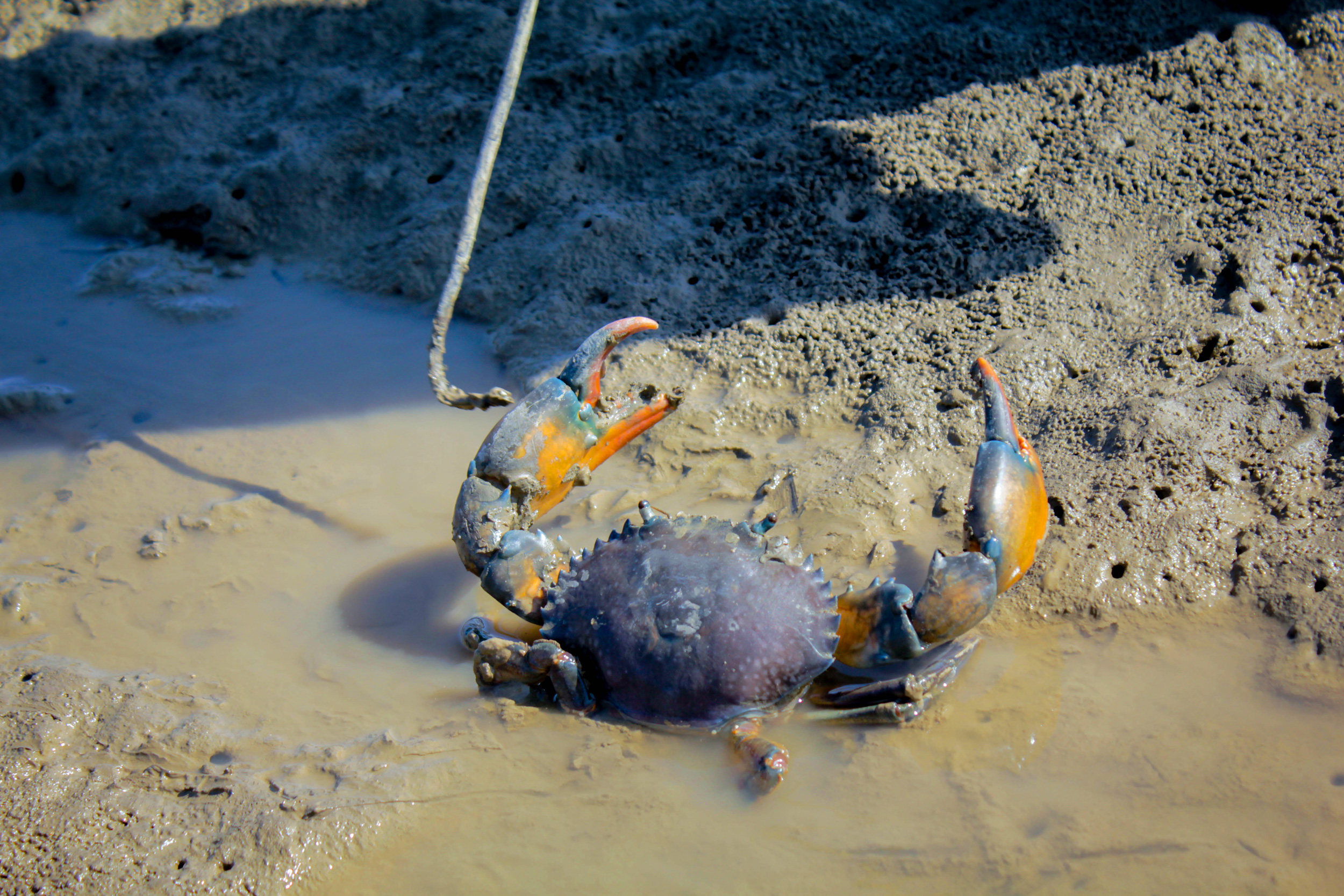 Crab fattening ponds are common throughout Southeast Asia; in other countries, they often operate in conjunction with a hatchery. Though WWF-Pakistan claims that ponds along the Indus Delta are sustainable because they are small, the long-term effects on the ecosystem have yet to be investigated. Some pond owners claim they are now struggling to catch enough juvenile crabs to stock their ponds. “In the absence of hatcheries, the natural population of crabs often comes under stress,” says Javed Mustaquim, former director (now retired) of the Centre of Excellence in Marine Biology at the University of Karachi. He urges fishermen to release egg-bearing female crabs back into the wild. The farmers insist that they rely only on males for their ponds, but there is no mechanism to check on harvesting practices. 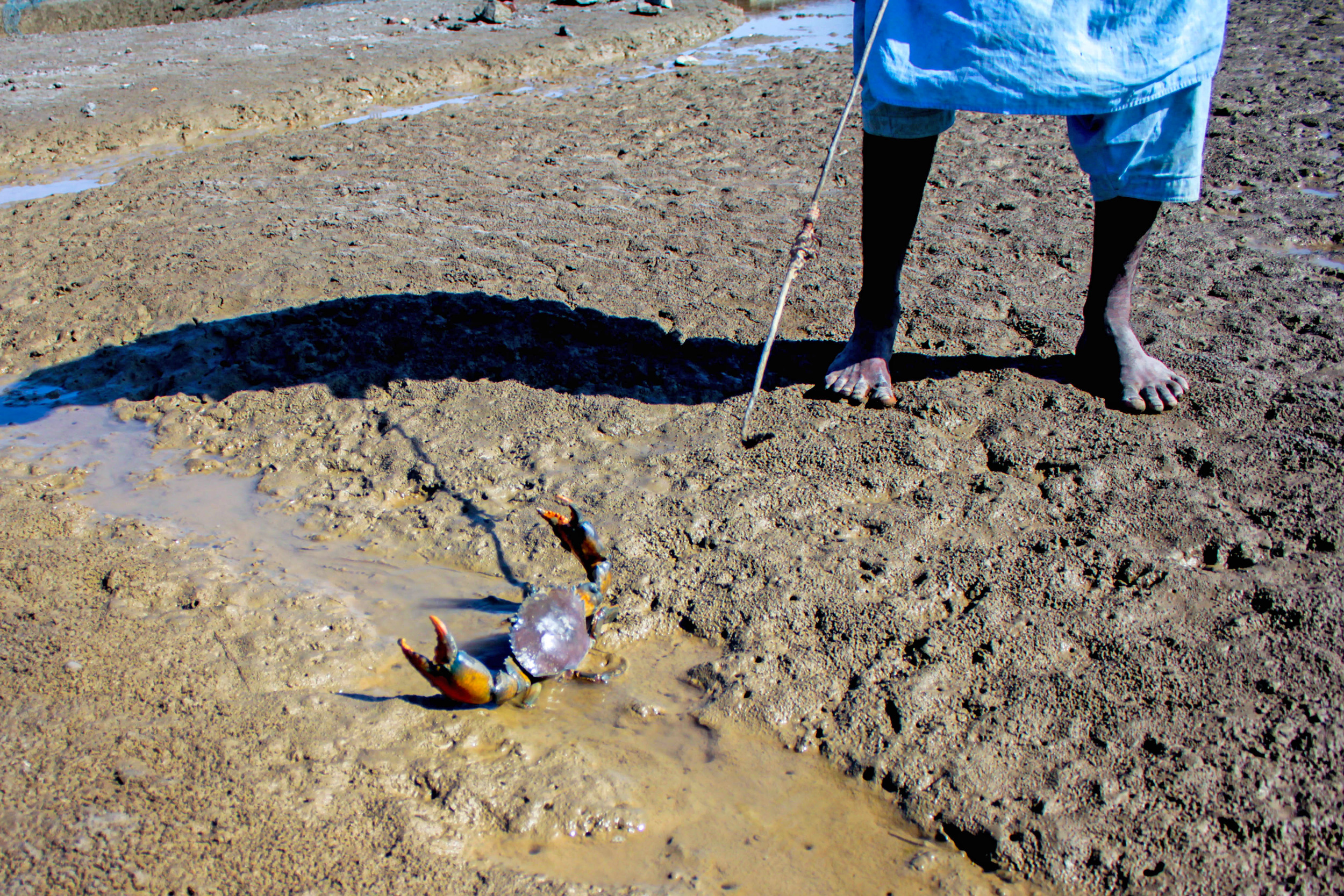 For the Indus Delta’s ponds to remain viable, Asif Inam, head of Pakistan’s National Institute of Oceanography, suggests that farmers must improve water management to prevent disease and pollution; learn to time feedings properly and provide more nutritional feed; add netting around ponds to deter predators such as stray dogs; and use proper stocking density (if ponds are overcrowded, crabs cannibalize), in addition to establishing a hatchery. It’s not clear how the ponds will fare over time, but for now, crabs have become a critical currency and a source of optimism for these farmers.