This little beauty is just one of the many species that live in the spaces between grains of sand and mud in the world's marine sediments. Photo by David Scharf/Corbis

This article is the first in a multi-part exploration of meiofauna. The others are “Here Be Tiny Dragons (and Other Micro Beasts)” , “Life Interstitial”, and “Lord of “Rhynchs.”

The Taj Mahal, the Eiffel Tower, the flash, bling, and bizarro of Times Square—it is the big and iconic that demand our attention. But it is in the spaces around these show-offs—the alleys and cafes, the thrift shops and playgrounds—where the true nature of a city plays out. “The action most worth watching,” the essayist Anne Fadiman writes, “is not at the center of things, but where edges meet.”

On a bucolic beach, the dipping Sun or a raucous eagle or the misty blast of a distant whale catches the eye, but most of the action is taking place beneath the beach blanket, in the interstitial spaces where sand meets water.

Slithering and clawing and swimming through the liquid film between individual grains of sand, mud, and other sediment, is a thriving ecosystem of microscopic organisms that spend their entire existence in a world so miniscule that, as Rachel Carson once wrote, a droplet of water separating two grains of sand is “like a vast, dark sea.” Unicellular organisms coat the sediments and ride the water between the grains. And animals, microscopic to us yet behemoths to the bacteria, algae, and protists they share these interstitial worlds with, take the roles of herbivore, carnivore, and detritivore to create rich and complex food webs.

These miniature animals constitute one of the better-studied categories of organisms in interstitial communities—the meiofauna, literally lesser animals. But they are lesser in name and size only. To be classified as meiofauna, animals must be smaller than 1,000 microns (1 mm), but larger than about 45 microns (0.045 mm), a categorization largely determined by the standard mesh sizes available in sampling sieves. (Some classifications use 500 microns [0.5 mm] as the upper limit. The precise definition is, it seems, in flux and varies between researchers. Bottom line? Without magnification, most are squirming specks to our eyes.)

Meiofauna are small in size but mighty in number. One expert, Olav Giere, estimates that under one footprint of moist sand lie as many as 50,000 to 100,000 individual animals. It strains the imagination to fathom the sheer multitudes of these organisms thriving in a seemingly lifeless beach, but it’s their diversity that’s most impressive, challenging even that found on coral reefs, an ecosystem touted as the planet’s most biodiverse. Today, of the 34 recognized phyla in the animal kingdom, 20 include meiofaunal organisms and five of those phyla are exclusively meiofaunal.

The impact of this squirming sand zoo is more Homeric than Lilliputian. The organisms are links in food chains, of course, but without them the beach would not be “the beach.” Instead, it would be a stinking mess rife with organic debris awaiting the decomposition that would never come. Interstitial organisms form the ultimate beach-cleaning crew.

Peering through an electron microscope unveils a world of stunning adaptations and body forms that help meiofauna cope with an environment that is both abrasive and dynamic. As crashing waves churn the sediment, meiofauna adapt in myriad ways—clinging to a grain of sand like a climber on a cliff, adopting elongated shapes to slip between the grains, or squeezing out a dollop of superglue to glom on tight.

Whether you’re a frequent beach walker or not, this photo essay is a chance to meet a few of the “locals” that inhabit the sand. It seems that poet William Blake had it almost right—there is a world on a grain of sand. 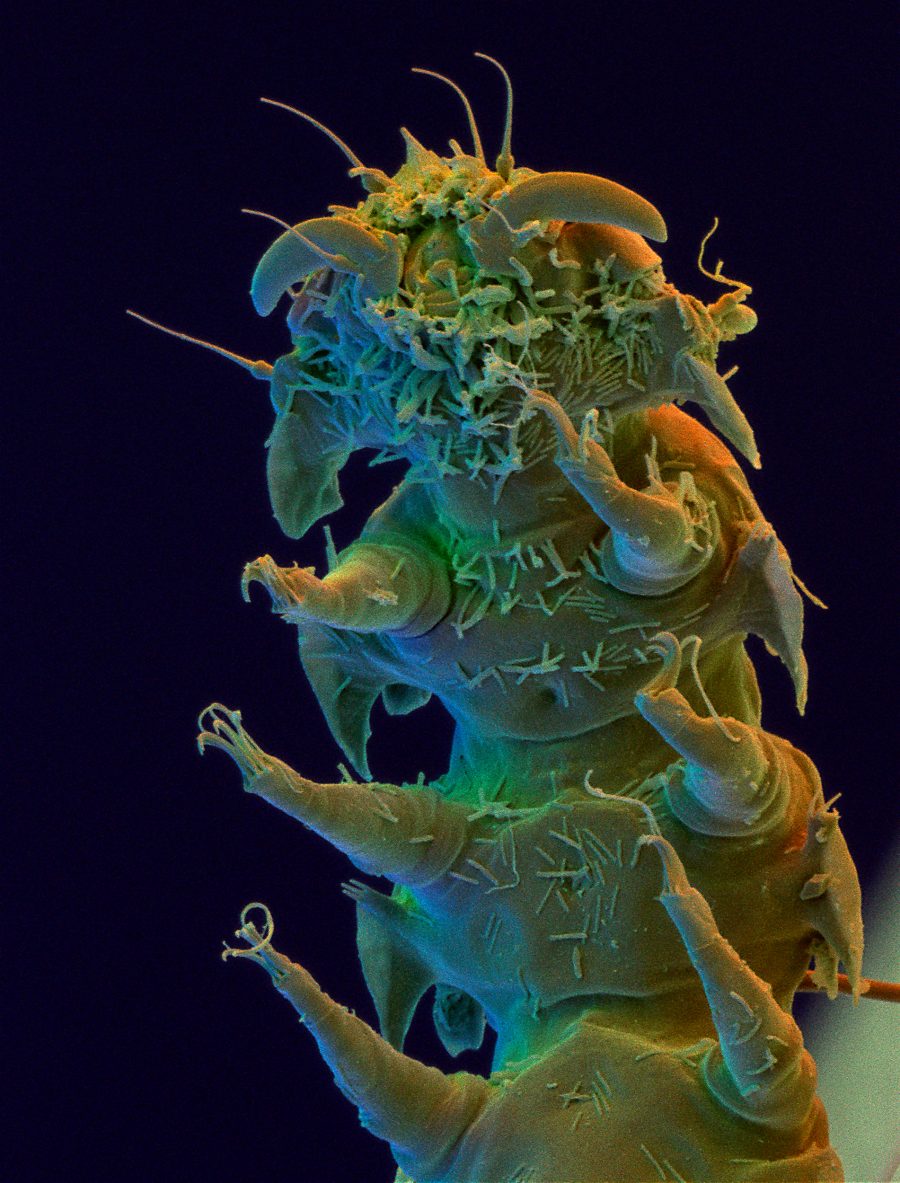 Plump, soft-bodied tardigrades use claws at the ends of their eight legs to grip sediment grains and crawl through interstitial spaces. When waves and strong currents move the sediment, they hold on for dear life. Other species of tardigrades use suction on their toes to grip, while some use both claws and suction. The name tardigrade comes from the Latin words for slow (tardus) and step (gradu), and the creatures, which can look quite charming as a chubby stuffed toy might, are also referred to as water bears. 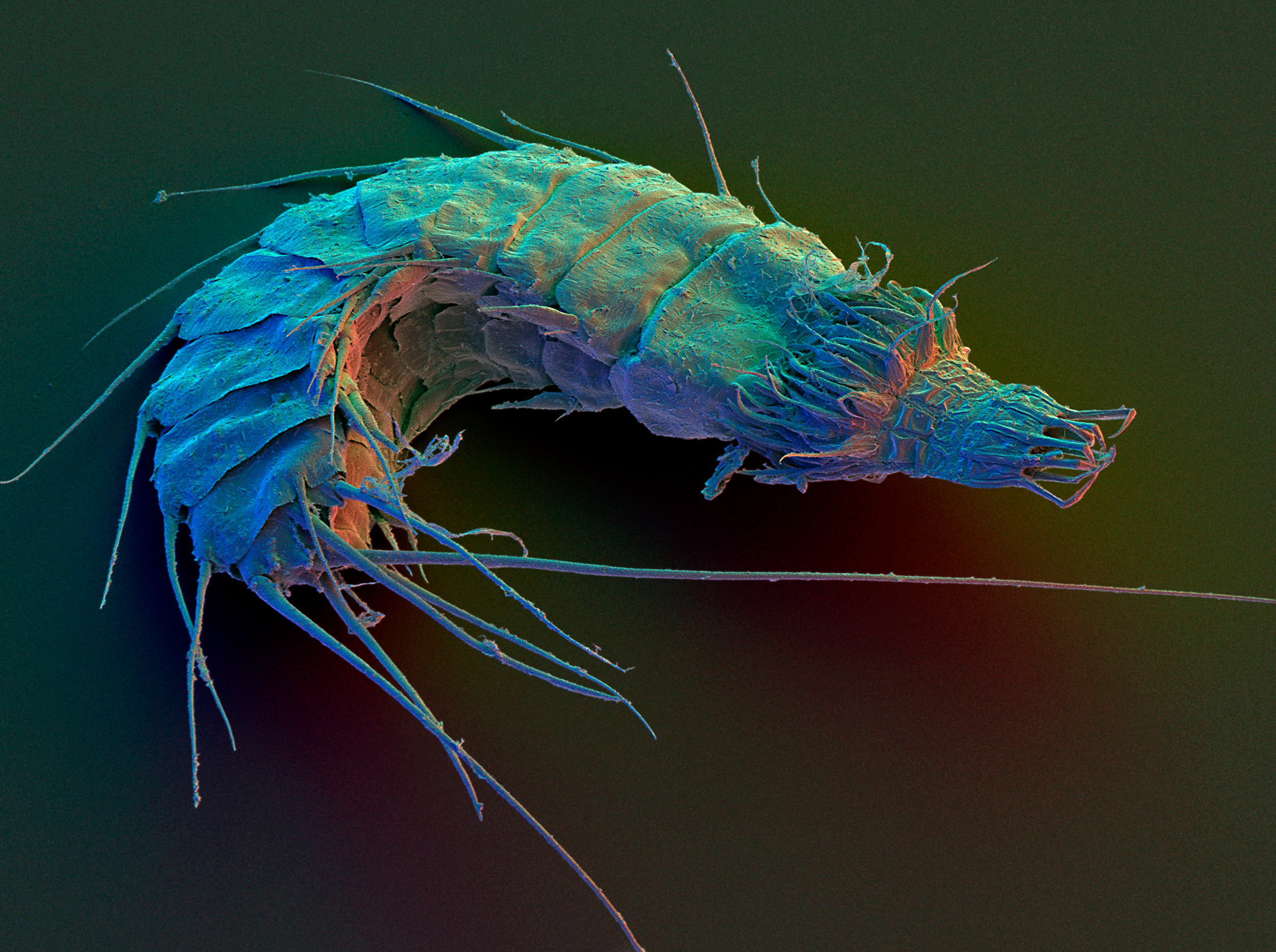 Kinorhynchs, from the Greek words for motion (kinema) and snout (rynchos), move through sediment using a protractible “mouth cone.” The animal first thrusts its head—stunningly armed with a ring of spines—from its cylinder-like body. Then, it hooks its spines into sand or mud grains and drags its body forward. Once anchored, its head retracts into its body, and the process repeats itself, the kinorhynch inch-worming its way through the sediment, exploring the world one grain at a time. (You can see a mud dragon on the move courtesy this video from Hakai Insititute researcher, María Herranz.) 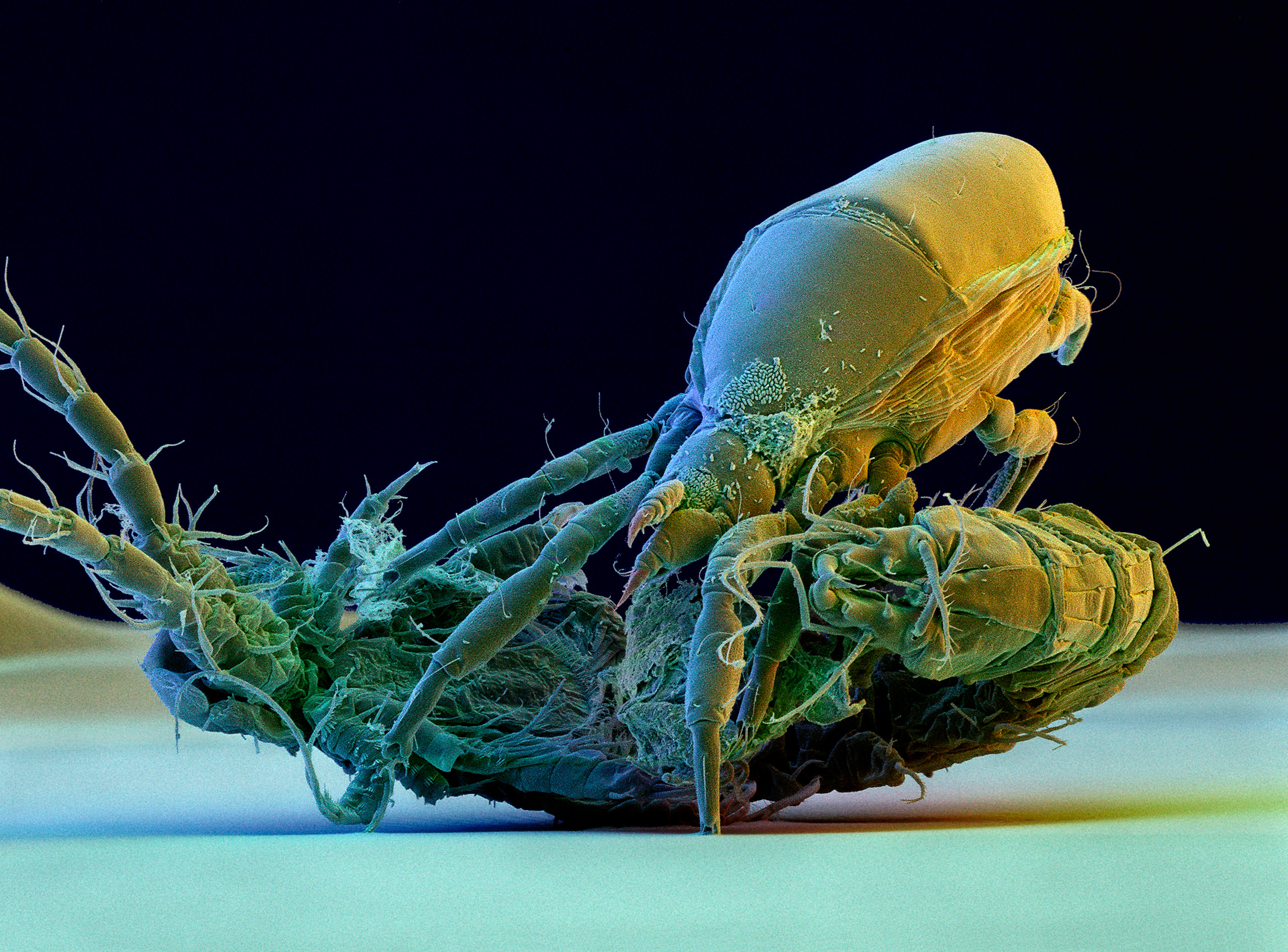 In the scheme of things, a mite in the ocean is rare. Mites are arthropods, the most numerous group of animals on Earth, but only about three to five percent of all arthropods live a marine existence. And of the 45,000 or so identified species of mites, only about 1,000 are truly marine, making them the only arachnids to live so. (Sea “spiders” are actually pycnogonids, a class entirely separate from arachnids.) Marine mites can be parasitic or free-living, such as this one, which is making a meal of a crustacean called a mystacocarid. 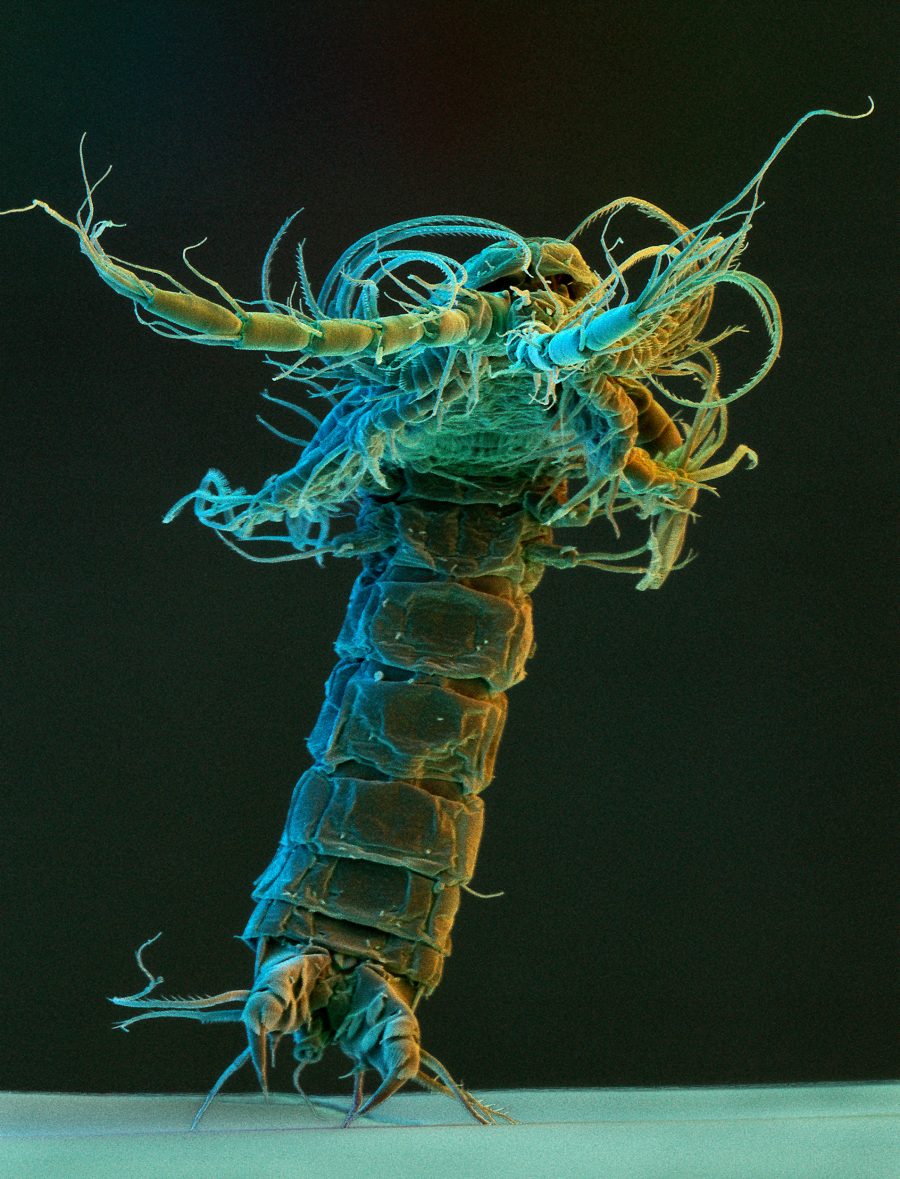 Mystacocarids are a type of crustacean that lives only in interstitial marine sediments. Their elongated, segmented structure helps them to squeeze through the interstitial spaces. To move, mystacocarids use their antennae and jaws to gain purchase on the sand grains, alternating “power strokes” on the surfaces above and below them. Researchers have calculated that one species can complete four cycles of two power and two recovery strokes per second, which results in travel of a whopping 420 microns (0.42 mm)—not bad for a creature less than one millimeter in length. Fine hairs on its appendages are used to filter detritus from the water. 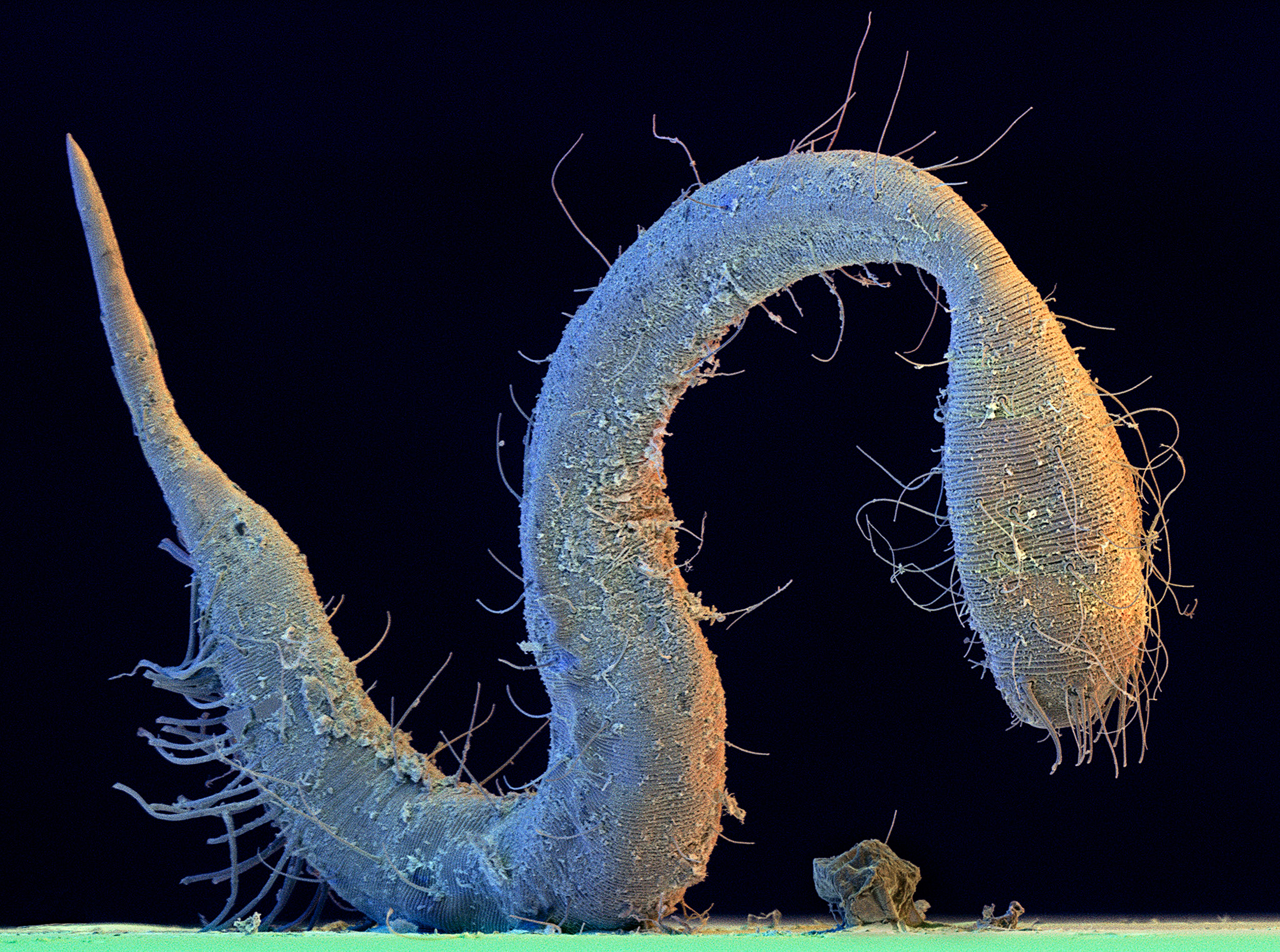 Nematodes are thought to be the most abundant multicellular animals alive today, and concentrations exceeding four million individuals per square meter have been estimated in some marine sediments. Nematodes are so ubiquitous that American nematologist Nathan Cobb famously said that if everything in the world—all the trees and mountains and living things—was swept away, “our world would still be dimly recognizable … represented by a film of nematodes.” Many of the species we’re most familiar with are parasitic—as one paper put it, “an estimated eight billion nematodes are enjoying the food, warmth, and shelter in human intestines today”—but this species is free-living. Its slender shape helps it fit within the interstitial spaces between sediments. And it belongs to a group of nematodes, the epsilonematids, that are shaped like the Greek letter epsilon (ε), which helps them travel between the grains. To move, this nematode uses the thread-like setae near its posterior to grip the substrate, and then propels itself forward in a loping, caterpillar-like fashion.

The sheer diversity and abundance of nematodes is reflected in the variety of roles they take in marine sediment ecosystems. Some feed on bacteria or algae or both, while others feed on detritus or are predators. 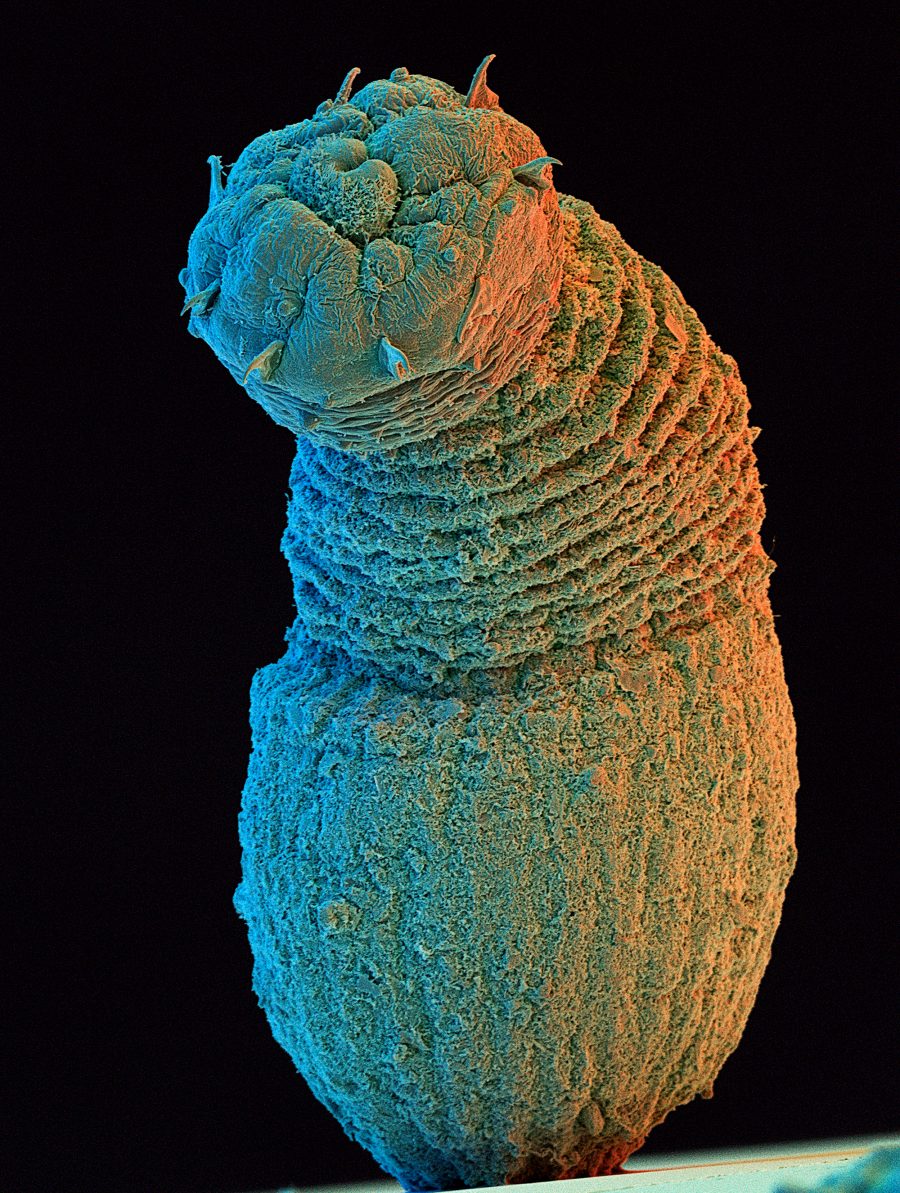 Sipunculids are a group of animals only found in marine environments, usually burrowed into sediment in shallow water. Sipuncula is Latin for “little tube” and refers to the animal’s fully retractable “trunk,” called an introvert. A fluid-filled interior cavity acts like a hydrostatic skeleton, which allows a sipunculid to extend or contract its body as needed. They often retract into a peanut shape, which gives them their alternate name, the peanut worm.

Most sipunculids are deposit feeders. They extend the introvert, with its fringe of mucus-covered tentacles, and trap small animals, microorganisms, or particles of detritus from the surrounding water. Then they withdraw the entire introvert into the body and ingest the captured food. 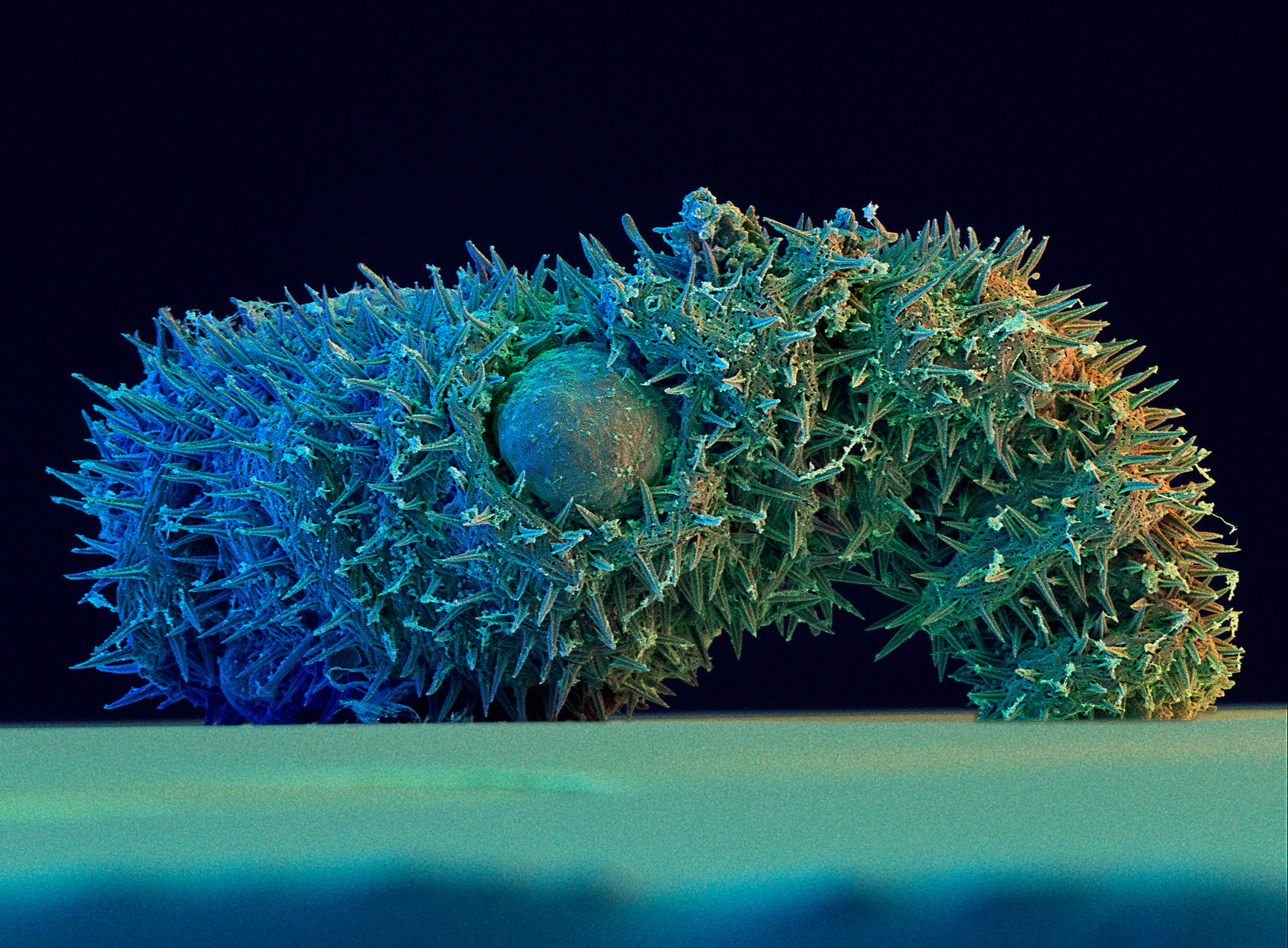 The Greek translation says it all: stomach (gastro), hair (thrix). Most of these spiny invertebrates live interstitially, in concentrations that can reach up to 100,000 per square meter of sediment. They use the bristles, in combination with strong muscles in their body wall, to glide across surfaces and sometimes even take short swims. At times though, gastrotrichs need to hang on tight, so they secrete a strong adhesive. The animals cling so tightly that, in lab situations, researchers must anesthetize the gastrotrichs before they can dislodge them from the substrate. Left on their own, though, gastrotrichs secrete a “de-adhesive” from a second gland to release the superglue’s bond. To feed, a gastrotrich creates a current by pumping its pharynx or beating the hair-like cilia around its mouth. This draws in food, such as detritus, bacteria, diatoms, and protists.

Most gastrotrichs are hermaphrodites, possessing both male and female genitalia, but a single gastrotrich does not fertilize its own eggs. Instead, two gastrotrichs meet for “reciprocal cross-fertilization,” and fertilized eggs, such as the one shown in this image, are released through a rupture in the body wall. 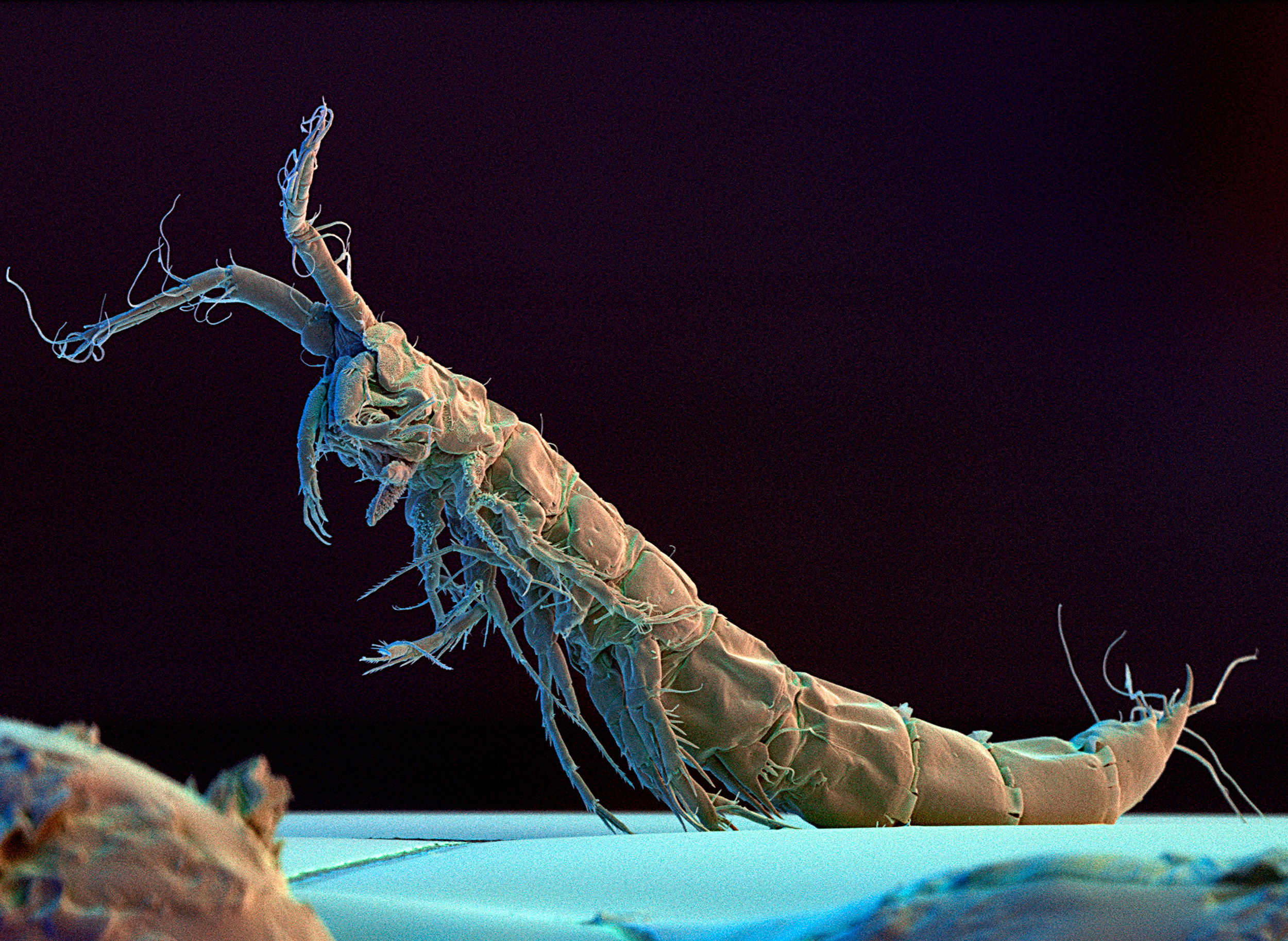 Copepods, a type of crustacean, are one of the most abundant types of marine zooplankton. They fuel everything from seabirds to fish to whales. But many copepod species, like the one shown here, are specialized for interstitial habitats. Their cylindrical, worm-like body is ideal for life in sediment, and they use pairs of jointed legs to walk across grains of mud or sand. This copepod is from the order Harpacticoida, a group of benthic copepods so abundant in marine sediments that only nematodes have greater densities. Although copepods can feed by filtering food out of the water, many benthic species eat by scraping bacteria and algae off sediment grains.

Correction: A previous version of this article misidentified the etymology of Sipuncula​ as being Greek instead of Latin.