The narrow blue beam of James Carroll’s head torch sweeps methodically from side to side over the gravel and rocks of Charmouth Beach in the county of Dorset on the south coast of England. It’s early January and at 5:30 p.m. already pitch dark, save for the twinkling lights of the town of Lyme Regis in the distance. Abruptly, Carroll stops, bends down, and picks up a dull gray stone the size of a grapefruit. With practiced ease, he hits it sharply with a rock hammer and the stone splits in two to reveal the perfect spiral of a 190-million-year-old ammonite embedded within.

Around 200 million years ago, this shoreline was entirely submerged by a tropical sea. The area was then around the latitude of Morocco, and its warm water supported a rich marine ecosystem filled with everything from ammonites (marine mollusks with a protective coiled shell) to ferocious 10-meter-long reptiles. Over time, the sea receded and the tectonic plate on which England sits drifted northward, but the sedimentary rocks and clay that formed the ancient seabed remained intact.

With each new storm or high tide, those rocks erode away from the steep coastal cliffs, revealing the spectacular remains of creatures that once swam in the ancient sea. The Jurassic Coast, as the region is called, stretches for 155 kilometers through Dorset and East Devon. It has been a World Heritage Site since 2001 and is renowned as one of the most extraordinary fossil-collecting sites on Earth, offering glimpses into an astounding range of geological epochs. 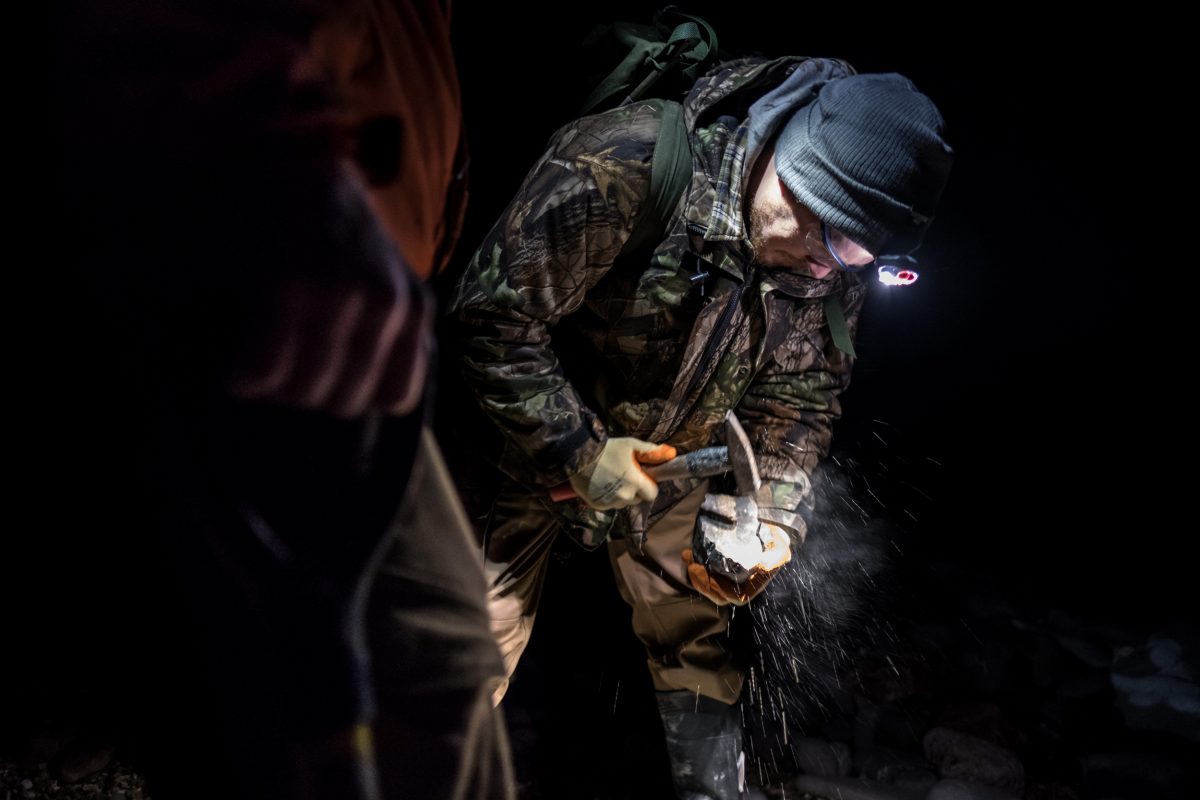 Fossil collector and preparer James Carroll uses a hammer to break open a rock on Charmouth Beach, Dorset, England. While some fossils can be found lying in the open, many professional collectors search for better finds hidden in limestone nodules.

In some parts of the world, all fossils are considered the property of the state, and even where this is not the case, regulations can make it hard for amateur collectors to take part. But on the Jurassic Coast, fossils can be revealed one day and destroyed by pounding waves or swept out to sea the next, meaning that neither landowners nor scientists can hope to save even a fraction. This means the involvement of the general public is key to ensuring the maximum number of fossils are collected for scientific research and public viewing. A progressive collectors’ code formalizes the average person’s ability to gather fossils and has contributed to a massive surge of interest in recent years, further stoked by social media and dinosaur movies.

“The most important thing is that we save the fossils,” explains Phil Davidson of the Charmouth Heritage Coast Centre, which was involved in creating the code.

The West Dorset Fossil Collecting Code of Conduct applies to a 17-kilometer stretch of coast between Lyme Regis and the village of Burton Bradstock, and was recently replicated in East Devon. Hammered out in the winter of 1998 by landowners, scientists, collectors, government agencies, and cultural and environmental organizations, the code clarifies ownership and seeks to ensure both that key specimens are preserved for posterity and that collecting happens in a safe and nondestructive manner. Collectors are free to take home small or common fossils but can only keep more significant finds—referred to as category one fossils—after reporting them. A collector who wants to sell a category one fossil has to offer it to museums before private buyers and must report the details of the sale. 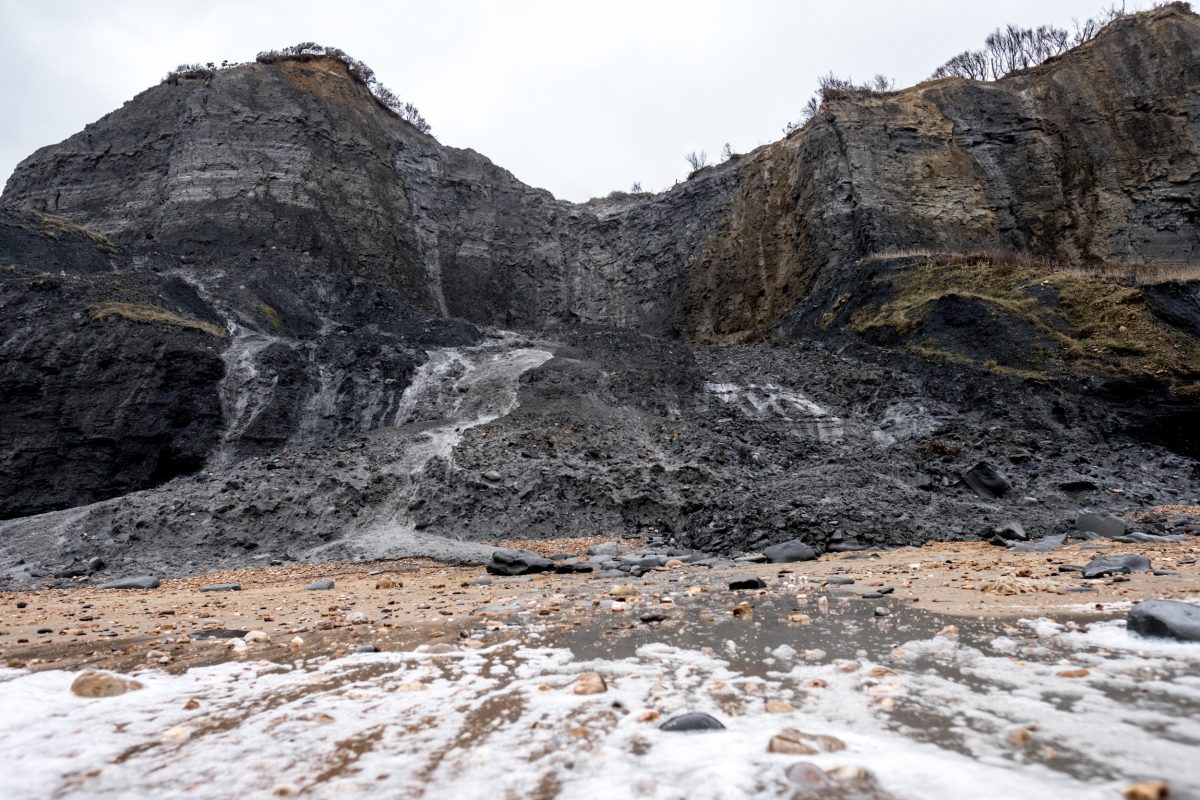 The soft rocks and clay of the Jurassic Coast on the south coast of England release a steady stream of fossils onto the beach with each new high tide or winter storm.

When there isn’t a global health crisis, hundreds of thousands of amateurs and professionals visit the area’s stony beaches each year. The Dorset Fossil Hunters Facebook group has over 2,500 dedicated members who share their finds and help identify new specimens, while enrollment in the paleontology program at the nearby University of Portsmouth has quadrupled since 2000.

Every day that the Charmouth Heritage Coast Centre is open, hundreds of people come in with fossils. Between 20 and 30 of the finds turn out to be of scientific interest each year, says Davidson, whose desk is covered with paperwork, cables, and scattered ammonites, under the watchful eye of a stuffed plesiosaurus toy. “Lots are found by professionals … but lots are also found by amateurs, even first-time fossil hunters.”

To make his point, he gestures at a small but perfectly preserved Pholidophorus fossil embedded in a limestone nodule in a public display case. “This fish was found by a five-year-old girl,” he says. Such fossils are rarely found in such good condition, and the discovery made headlines in national newspapers.

The rise of citizen fossil collecting is a fitting salute to Lyme Regis’s most famous denizen, Mary Anning. By the age of 12, Anning—with her brother’s help—had uncovered one of the world’s first ichthyosaurs. The discovery took place in the early 1800s, before the term dinosaur had even been coined. Anning, whose key role in the development of paleontology in the United Kingdom was largely obscured until long after her death, collected dozens of scientifically important specimens, some of which still take pride of place at museums around the world. In recent years, she has been the subject of several books, and a new film about her life, starring Kate Winslet, is due to be released this year, which may bring a further wave of collectors.

On the beach, Carroll examines his find with satisfaction. He has found more ammonites than he can remember, but this one is interesting, set in a wave of crystal within the limestone. He puts it into a heavy canvas backpack and moves on down the beach. Eventually, he’ll use air tools at his studio to chip away excess rock and fully expose the ancient creature inside. He occasionally sells one of his finds, though most of his income is from running tours for amateurs and cleaning up fossils for other collectors; demand for his fossil-preparation service is so high that he estimates it will take him 5,000 hours just to get through his backlog of fossilized lobsters. 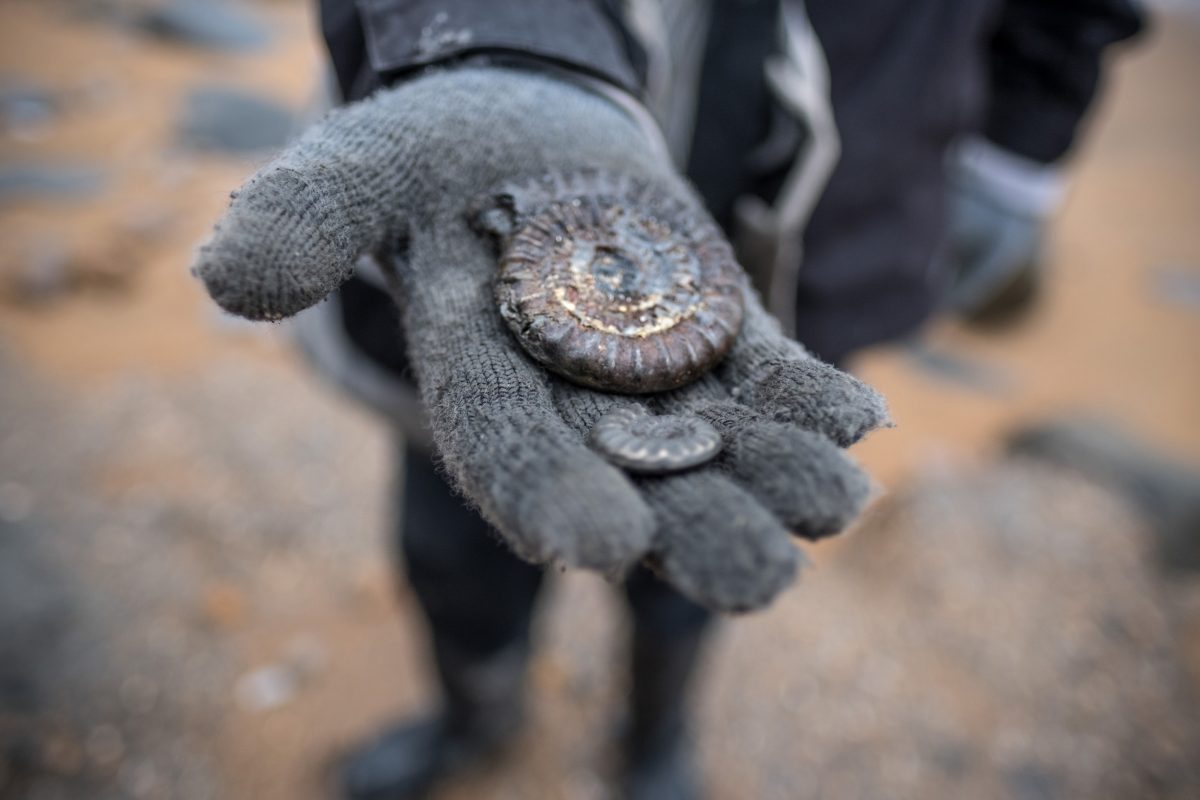 Before long, he crouches again and picks up a stone the size of a matchbox. To an amateur, it looks entirely ordinary. This one, he explains, contains the fossilized remains of an insect. On the rock’s surface, a barely visible fleck of light gray—an extremity of the ancient creature—is the only giveaway.

“When you look at it in your hand and say … I’m the first person ever to see it, it’s pretty cool,” says Carroll.

The growing number of visitors to the Jurassic Coast has led to some healthy competition. With so many collectors scouring the beach, ammonites and other popular fossils get snapped up quickly, encouraging many regulars to seek out new and overlooked types of fossils, such as insects and fish, many of which turn out to be new to science.

More and more people are starting to make a living from fossil collecting, selling their finds to local shops, high-end London stores, or private collectors, or putting them up for auction, where a well-preserved ichthyosaur can sell for hundreds of thousands of dollars. For Carroll, however, and others like him, the business element is no more than an unfortunate necessity. It’s the electric thrill of opening a rock and seeing 200 million years back in time that he finds motivating. He rhapsodizes about how, after hundreds of millions of years, you can look through a microscope and still see the individual hairs, no more than eight hundredths of a millimeter wide, on the wings of some prehistoric fly. And above all, with no two fossils ever being quite the same, he dreams about what may be emerging from the cliffs at this very moment.

“What else haven’t we found out there?” he asks. “It gives me goosebumps!” 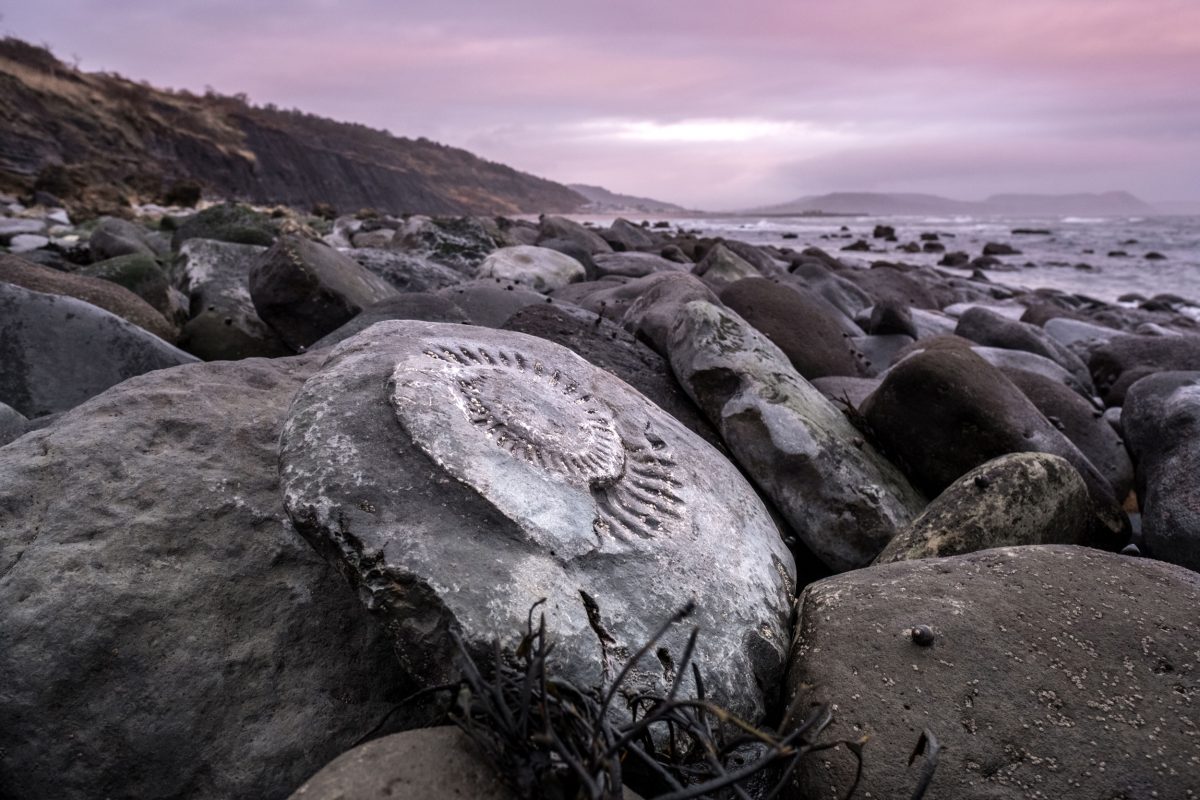 The imprint of a large ammonite is seen on Monmouth Beach in Lyme Regis, Dorset, England. A limestone shelf here, known as the ammonite graveyard, boasts thousands of ammonite fossils that can be viewed at low tide. 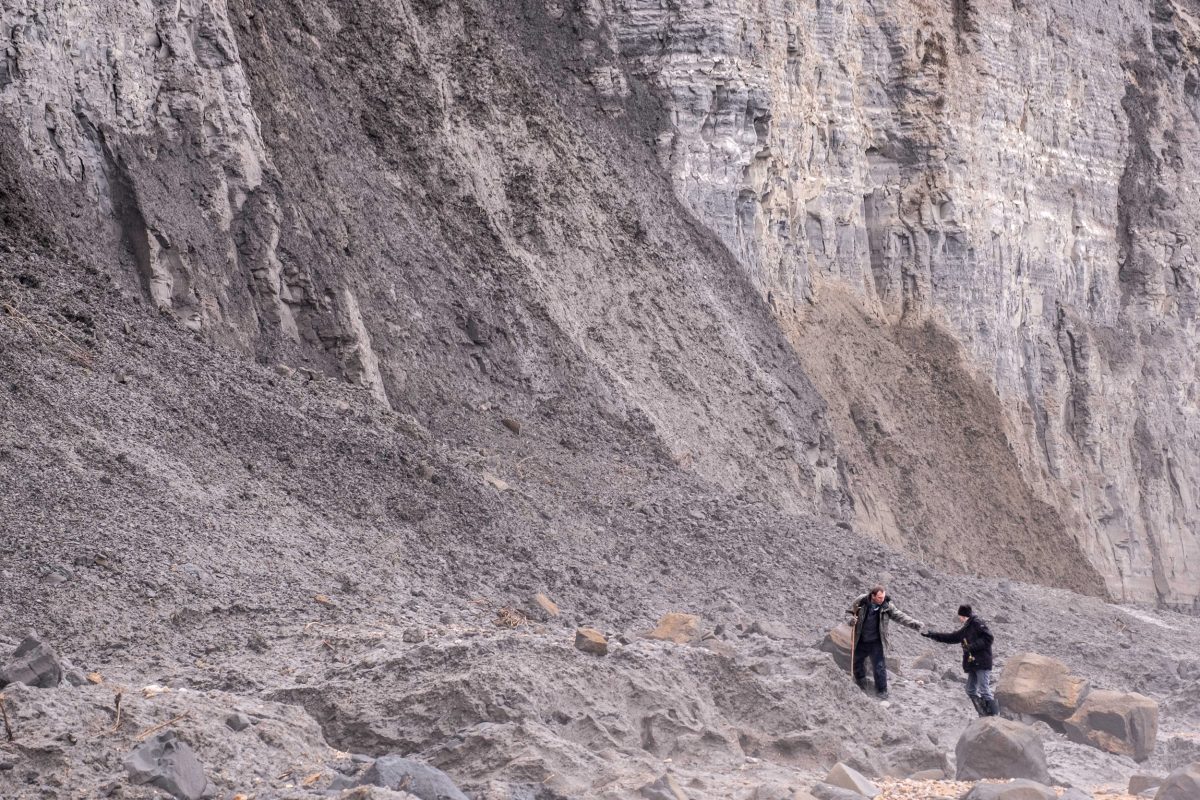 An amateur fossil collector passes a new find to his son as they scour newly exposed sediment from a landslide on Charmouth Beach. 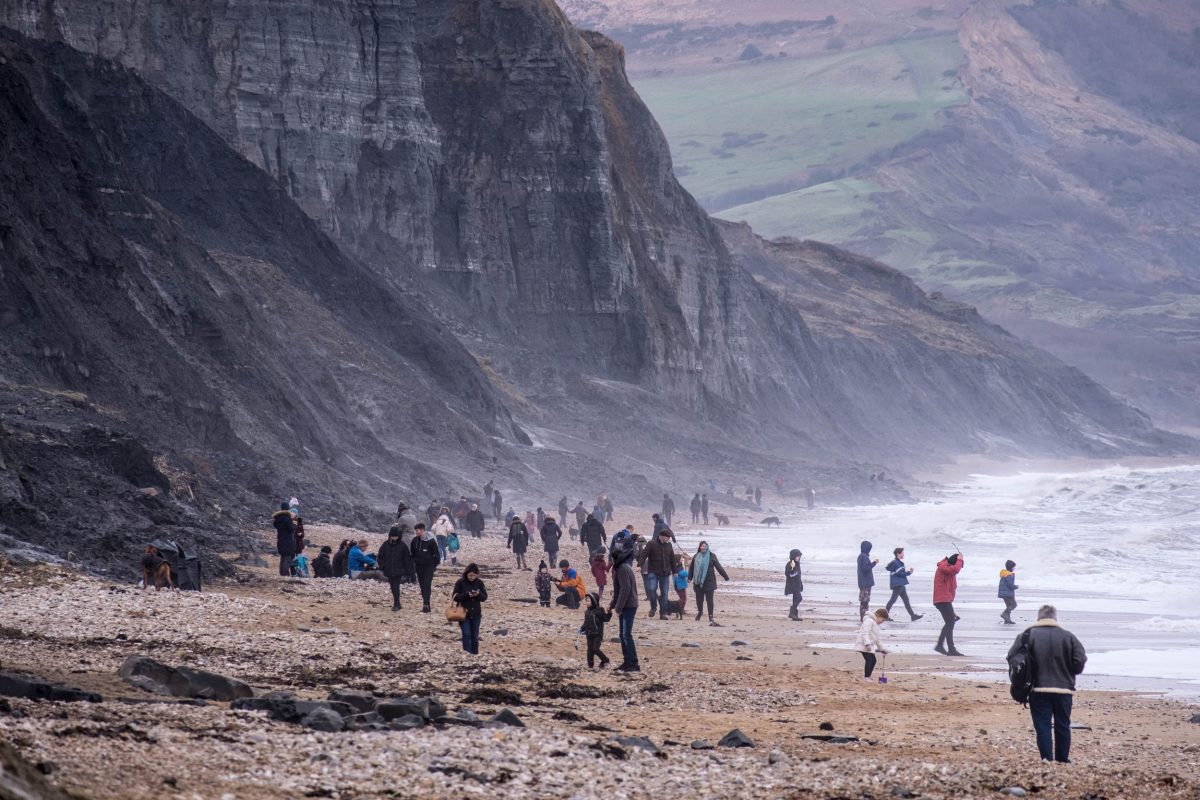 Professional and amateur fossil hunters mingle with tourists on Charmouth Beach, one of the most popular fossil-collecting sites in the United Kingdom. 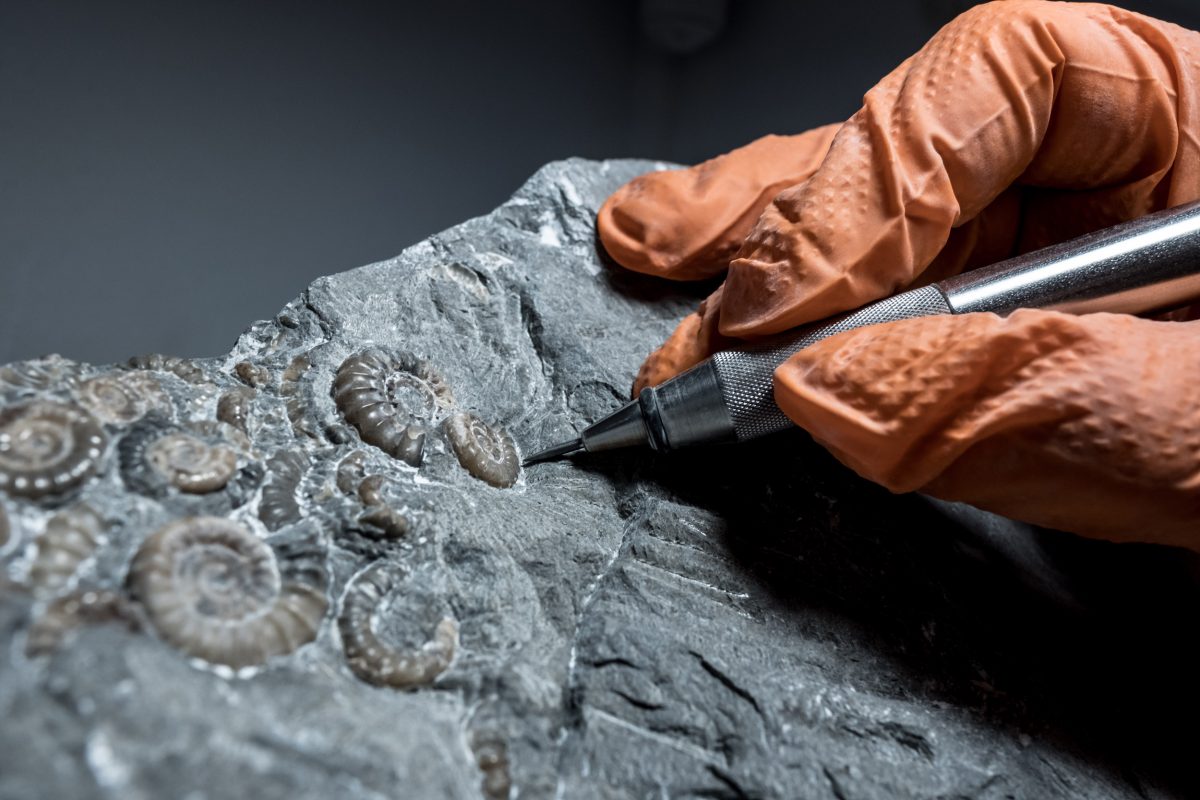 Carroll works on a piece in his studio-kitchen in Axminster, Devon, England. The work of exposing ancient creatures from surrounding rock takes extreme precision. 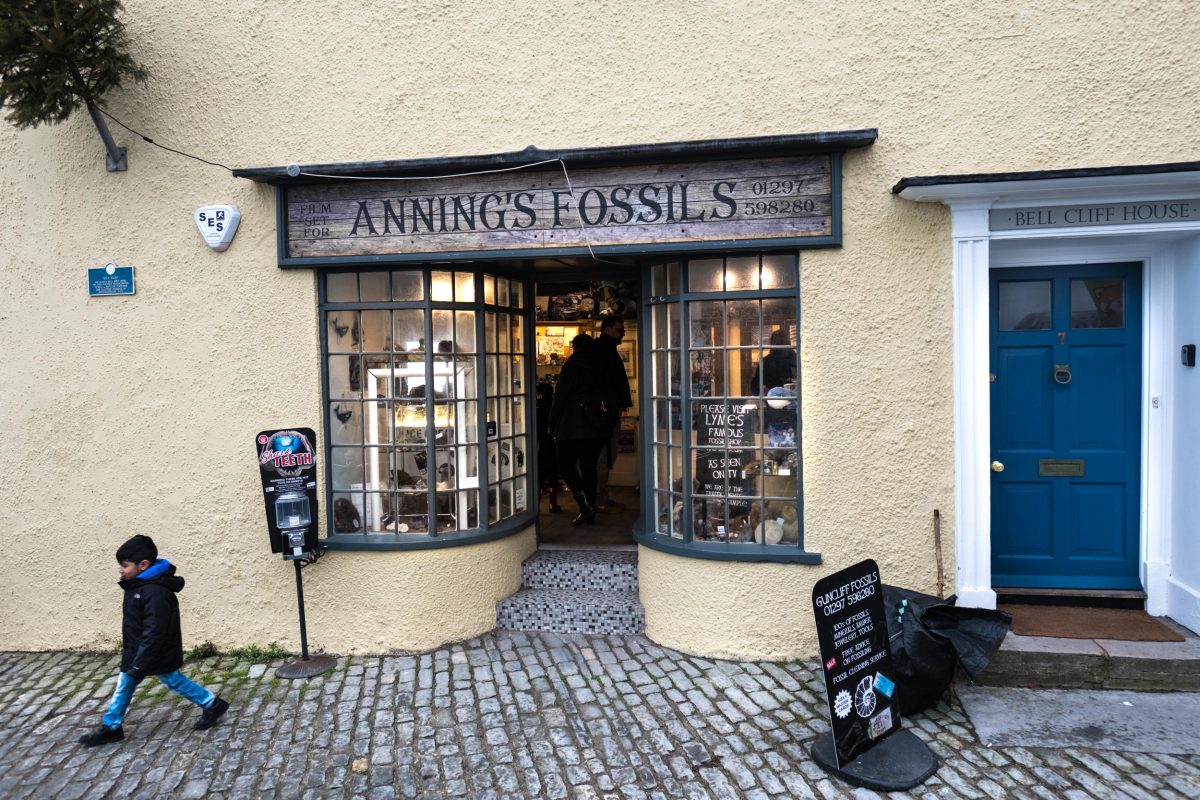 A boy walks out of a fossil and curio shop owned by longtime collector Barry Titchener. The shop was used as the setting for Mary Anning’s fossil business on the set of the upcoming biopic about the Lyme Regis–based fossil collector. Her actual shop was situated just across the street. 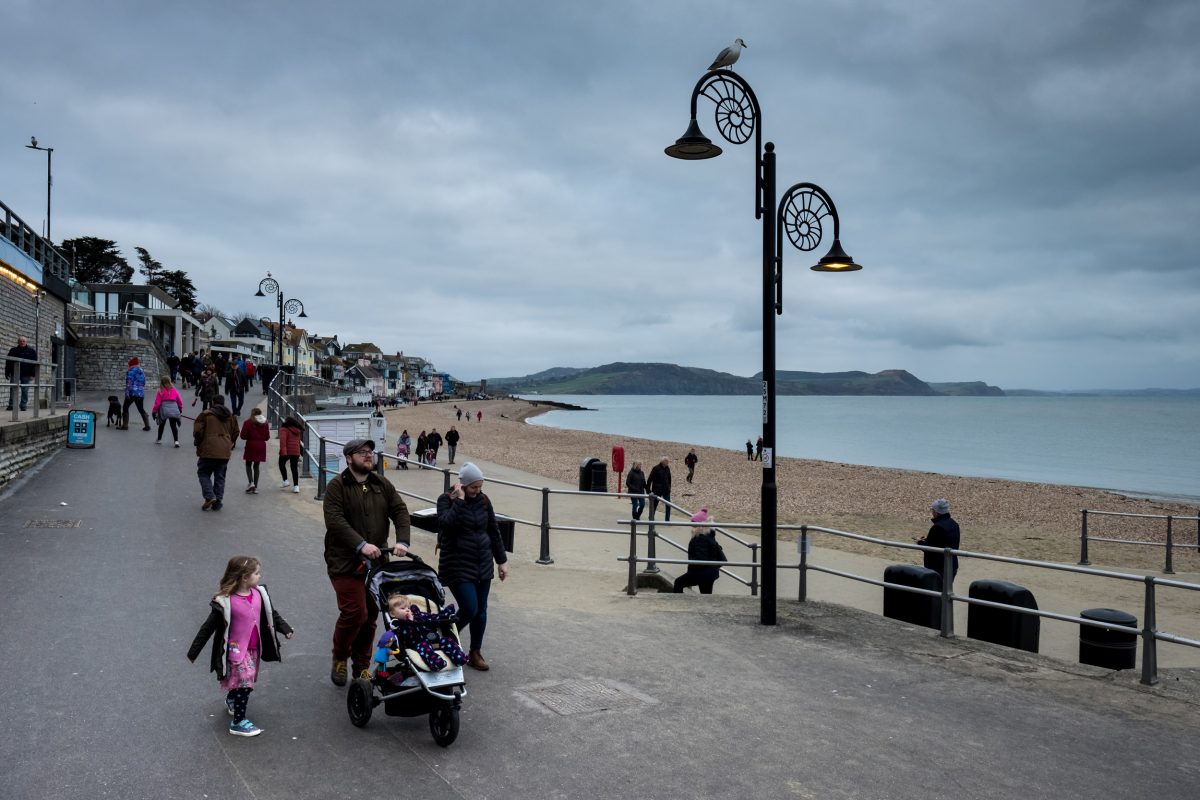 People walk along the seafront past streetlights shaped like ammonites in Lyme Regis. The town was the home of Mary Anning, and is one of the most productive areas of England’s Jurassic Coast. 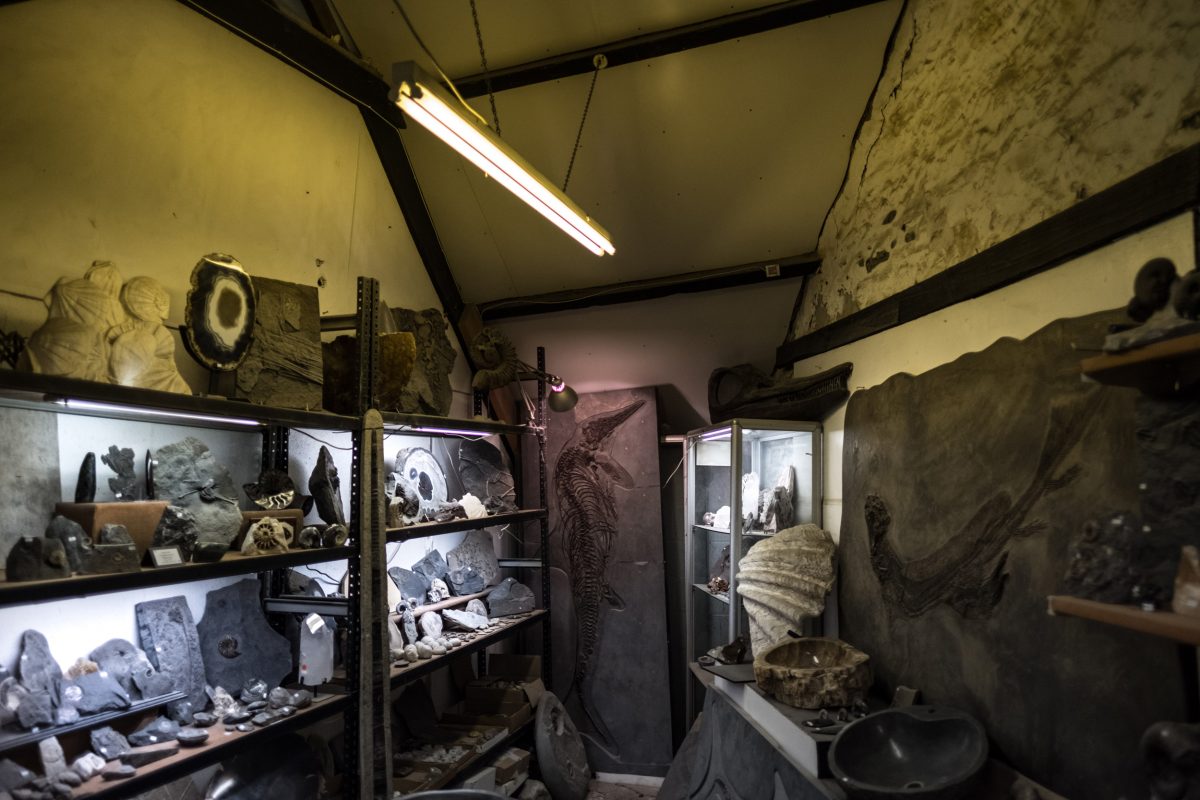 Fossils, including an ichthyosaur (center) and a shark (right), on display in a shop owned by veteran collector Chris Moore in Charmouth, Dorset. 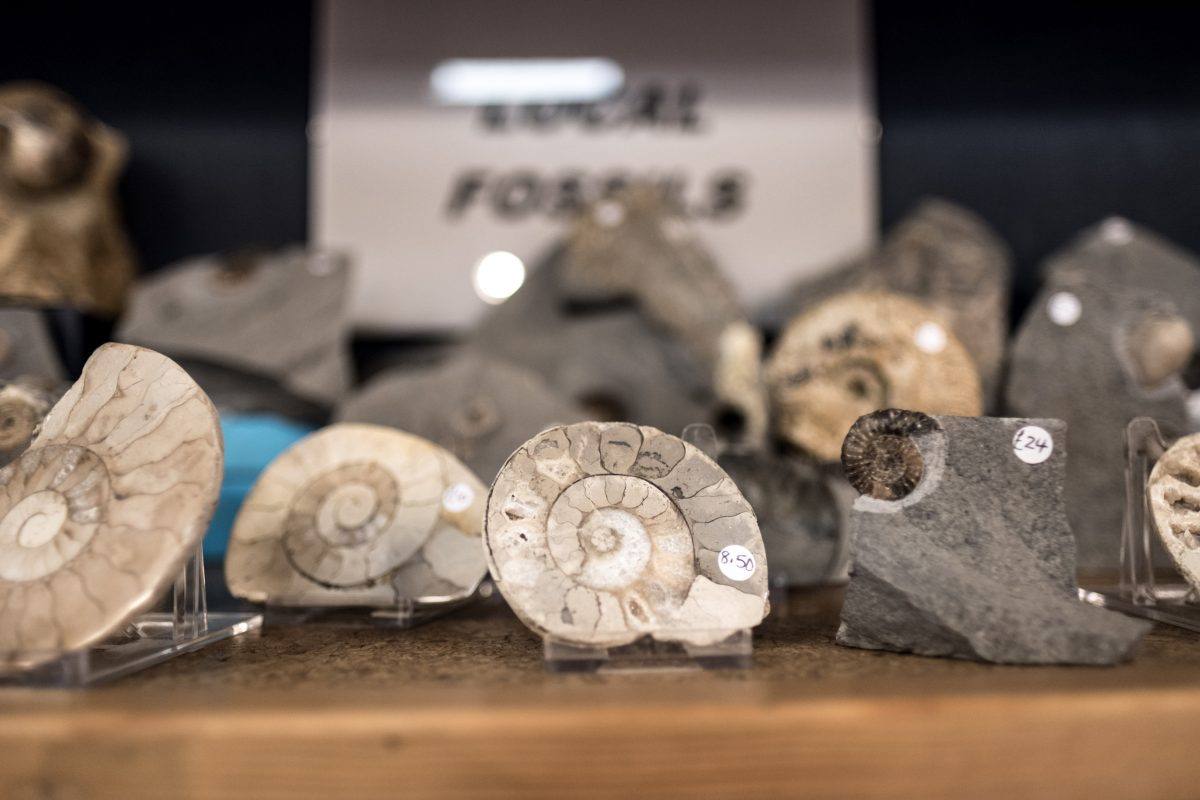 Locally found ammonites are displayed for sale in a Lyme Regis fossil shop.