A worker attends to an injured California sea lion during a rescue operation on Isla Partida, Mexico. Photo by Joanna Lentini

Lying motionless on a sandy vinyl banner serving as an operating table, a mature California sea lion named Frida has found herself in a most unusual situation. Anesthetic gas streams through an acrylic cone snug around her snout, and her wide eyes scan the human figures huddled around her. As the sun inches below the horizon, Frida falls unconscious, and a team of about a dozen wildlife experts, veterinarians, and their assistants from the Mexican navy and other governmental organizations go to work removing fishing line embedded in the flesh of her neck.

A couple of hours earlier, Frida, named after the artist Frida Kahlo, was relaxing on the sun-drenched rocks of Los Islotes. The dramatic Mexican islet, with jagged pillars that seem to burst straight out of the sea, straddles the Gulf of California and Bahia de La Paz and is home to a permanent breeding colony of California sea lions. Unbeknown to Frida, experts with Rescate de Lobos Marinos, a project run by the local nonprofit Cabet Cultura y Ambiente Asociación Civil, which specializes in sea lion rescue and medical care, had tracked her around Los Islotes for two years, waiting for the right opportunity to capture her. Time was running out for the rescue mission—the fishing line was so deep in Frida’s neck that it threatened to strangle her, prevent her from foraging or feeding, or cause infection. Project coordinator and lead veterinarian Daniela Bárcenas de la Cruz wasn’t sure Frida could survive another year without intervention. 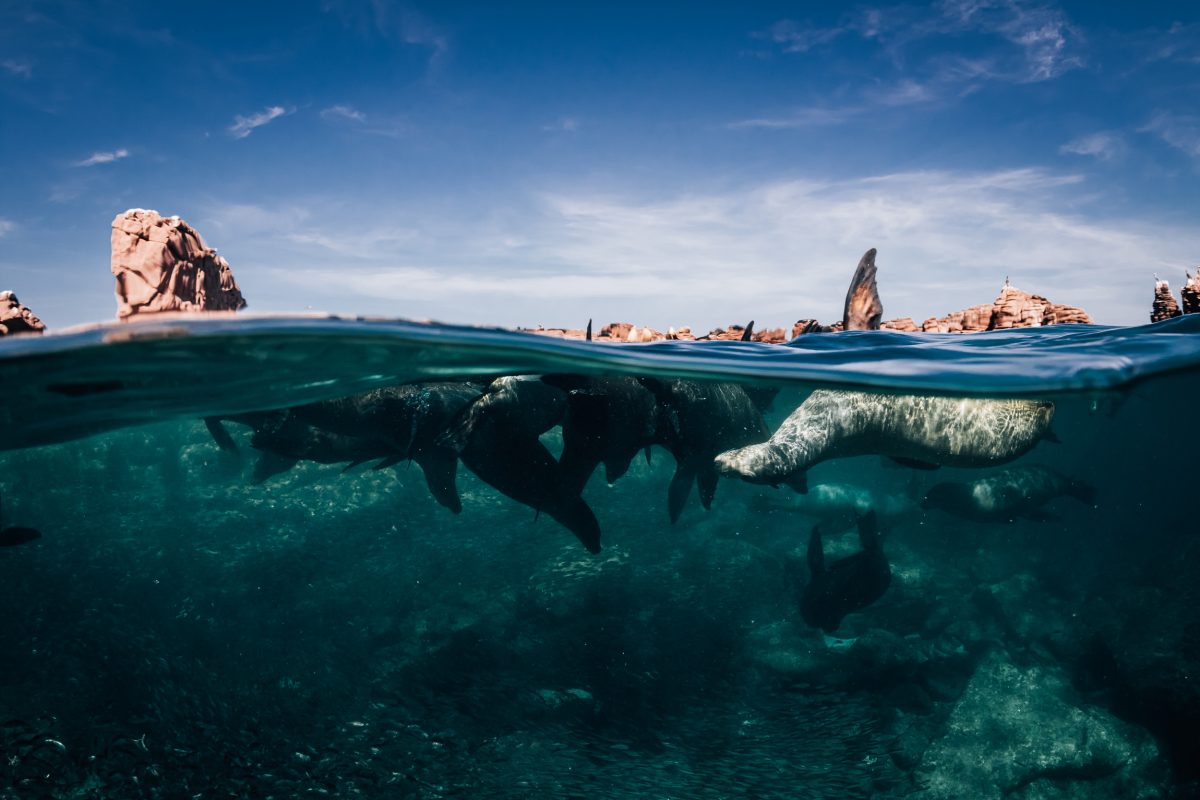 Sea lions from the Los Islotes colony float at the water’s surface off the coast of La Paz, Mexico. The animals are of economic significance to the region—tourists flock here each year to swim with them.

It’s difficult to estimate just how many sea lions get tangled in errant fishing gear in the area each year, says Bárcenas. Perhaps 30 animals out of about 600 in the Bahia de La Paz population alone have been entangled in the past five years, she calculates. Sometimes animals can survive for years with fishing line attached to them. “What we see is the accumulation of cases over time,” she says.

Some entangled animals are only spotted once and then disappear; other animals bear scars from ropes and lines they’ve escaped on their own. Since Rescate de Lobos Marinos’s inception in 2015, Bárcenas; the group’s president, Eréndira Valle Padilla; and their team have saved 35 animals during monthly monitoring and rescue missions. The animals they handle are typically ensnared by lines or gill nets that come from local, small-scale fisheries. They rarely see animals trapped in gear from industrial fishing operations, but they believe that’s simply because, in those cases, the animals die at sea. In the United States, the National Oceanic and Atmospheric Administration considers entanglement in fishing gear to be a main threat to California sea lions, which range from Mexico to Alaska.

Frida proved to be one of the most challenging cases for Rescate de Lobos Marinos. I had been invited along to witness the rescue effort after a colleague introduced me to the team while I was in the area leading an annual dive trip. 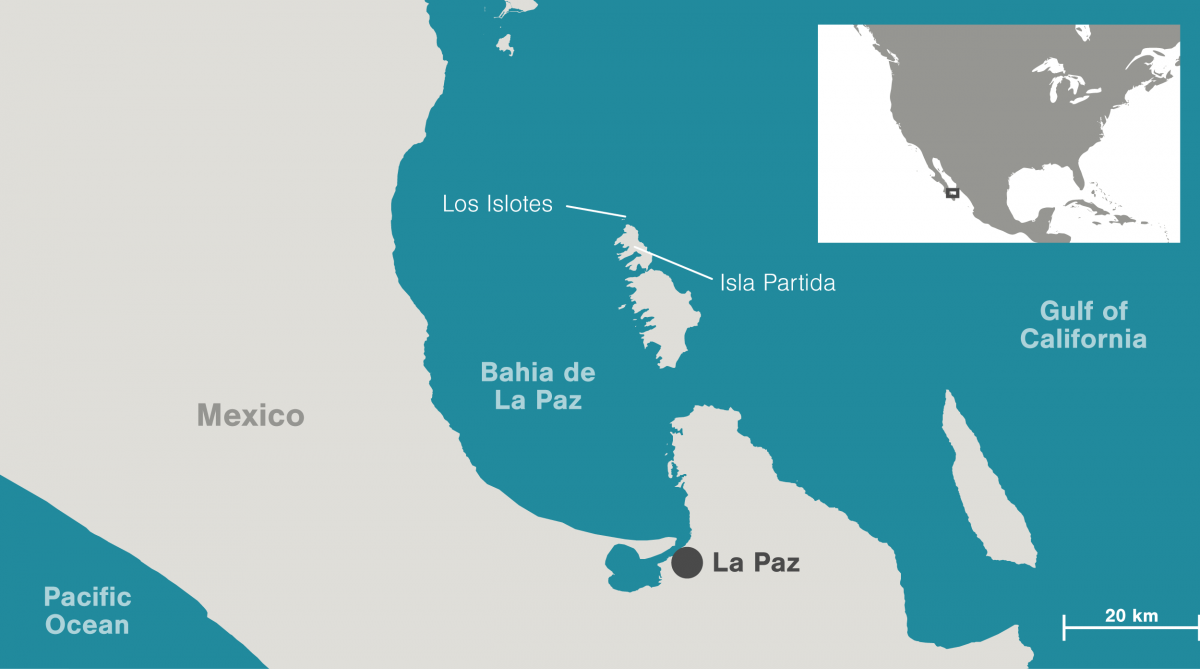 The day before her capture, the team found Frida resting on the northern side of Los Islotes. They fired a dart but it broke apart midair; when the needle struck Frida, no sedative entered her body. With the needle embedded in her back, Frida quickly fled.

On the morning of the rescue, the team located Frida in nearly the same spot and successfully darted her. Startled, she disappeared into the water once again, but the sedative would soon take effect.

The special combination of drugs used in the dart allows the animal to instinctively surface to breathe even when fully sedated. Under normal circumstances, a sedated sea lion surfaces after 10 to 15 minutes. The rescue team uses a hydrophone to help locate the animal, picking up the signal of an audio-based transmitter attached to the dart, provided they’re within 800 meters. 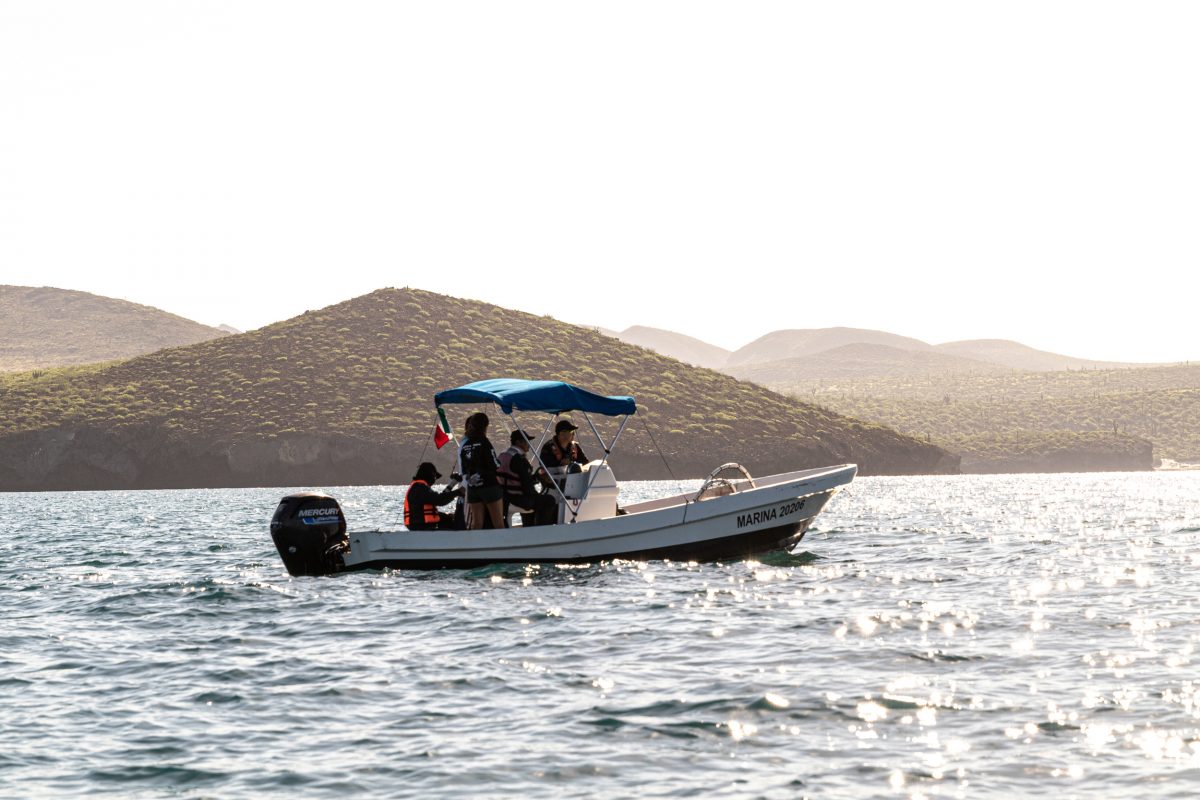 Traveling between La Paz, where Rescate de Lobos Marinos is based, and Los Islotes takes the team roughly two hours each way.

However, this day, after circling the islet for 30 minutes, the team still had no sign of Frida. With the sun setting, emotions began to rise as the team feared they wouldn’t find her before nightfall. The longer she floated in the water, the higher the likelihood a boat might collide with her. And without daylight, the tasks ahead of them would only become more challenging. After searching for another 20 minutes, they finally located Frida over a kilometer away from her colony.

By then, significant time had passed and the initial sedative was wearing off, which made it too risky to bring her on board. The team towed Frida in a net alongside the boat for about 10 minutes until they reached a secluded beach on Isla Partida where they’d set up a makeshift field station with pop-up tents, folding tables, coolers, and the soft Rescate de Lobos Marinos promotional banner that serves as the operating table. The team meticulously planned this rescue mission, as they do all of their remote fieldwork. The closest cell signal is 45 minutes away, and their home base in La Paz is two hours by boat. If they’d forgotten a key piece of equipment, they’d be facing setbacks that could cost time, money, and potentially lives. 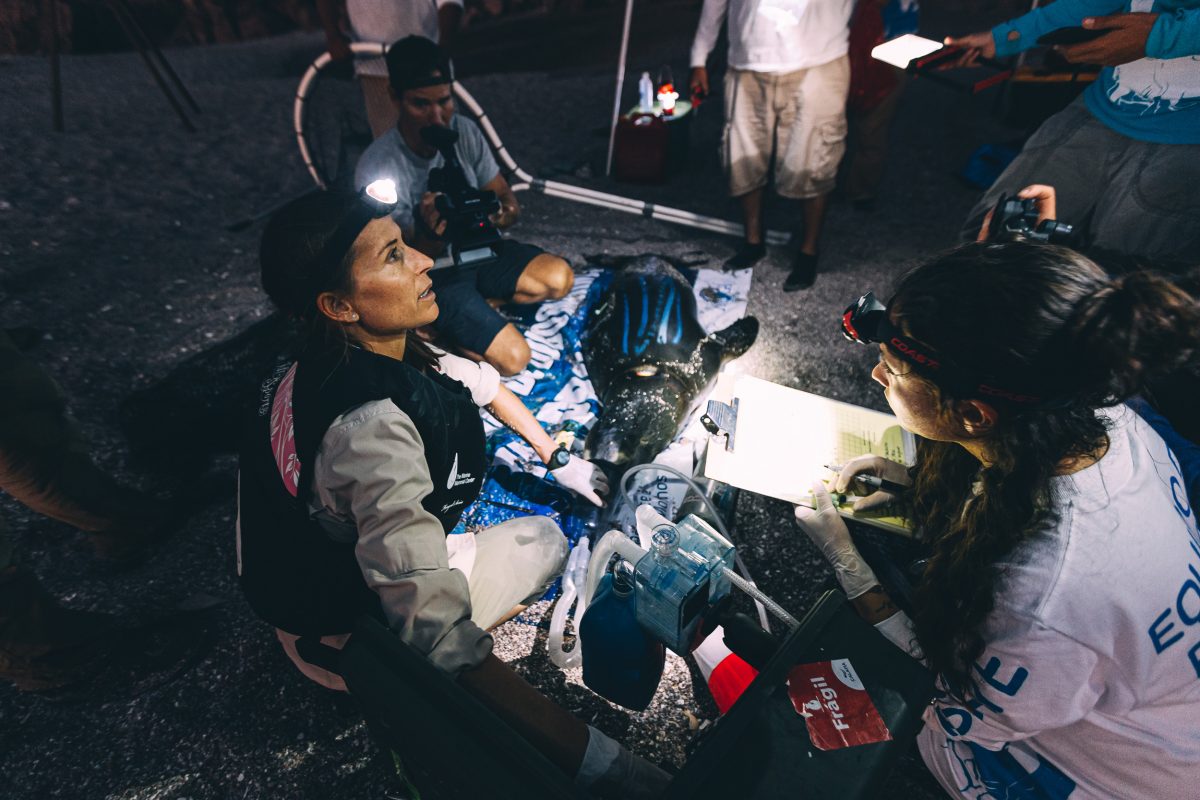 Sophie Guarasci from the Marine Mammal Center in Sausalito, California, administers a mixture of oxygen and other gases to keep the California sea lion named Frida sedated. Beside her, Jessica Martinez, an intern with the Rescate de Lobos Marinos project, keeps track of Frida’s vital signs, timing of the rescue procedures, medication administered, and other details.

Now, as Frida lies motionless on shore, Bárcenas confronts her difficult task in near darkness. She flushes Frida’s wound with antiseptic and snips apart the hard acrylic fishing line wedged in the animal’s neck. Finally, she gently threads it out of Frida’s flesh.

Within 10 minutes, the fishing line is gone and the team quickly takes whisker, fur, and blood samples to send away for analysis. Sophie Guarasci, visiting from the Marine Mammal Center in Sausalito, California, which provides training and support to Rescate de Lobos Marinos, says the samples offer insights into the health of the specific animal and can help detect trends in disease. Dave Zahniser, also visiting from the Marine Mammal Center, adds that sea lions are an indicator species: what the team learns “is important to better understand the overall health of our oceans and, in turn, human health.”

The crew leaves Frida with a memento—a tag with the number 334 attached to her flipper. The tag will help them identify her and monitor her progress in the following weeks, months, and years. Finally, they weigh her in a net from a hanging scale. Her weight will help them judge how accurately they estimated the amount of sedative she needed, and will be useful in the future if she ever needs to be re-sedated.

Within an hour of arriving at Isla Partida, Frida wakes and everyone sighs with relief. The team’s spirits are high as they watch her bolt for the security of the ocean, but they know her complicated case cost them valuable time. With the weather shifting, the team is only able to complete one more rescue the next day before heading back to La Paz.

Rescate de Lobos Marinos’s continued successes in the months following Frida’s rescue have left the California sea lions around the Bahia de La Paz in good condition for the time being. Now, the passionate team has its sights set on a remote island off of Sonora, in the northeastern Gulf of California, where they’ve identified 40 entangled sea lions in need of help. Frida, meanwhile, is doing well. The team regularly sees her on their excursions: she’ll always bear a scar, but her wound has healed. 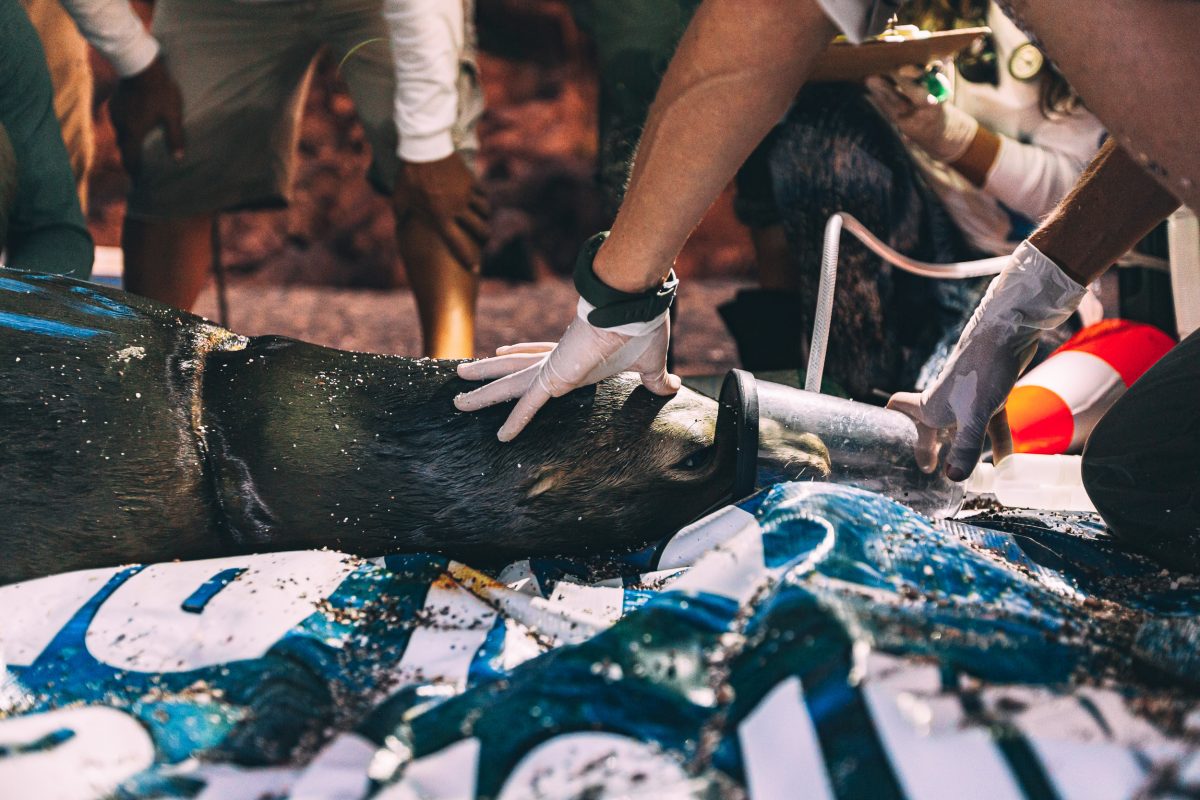 Frida receives oxygen and a sedative after workers removed fishing line from her neck. 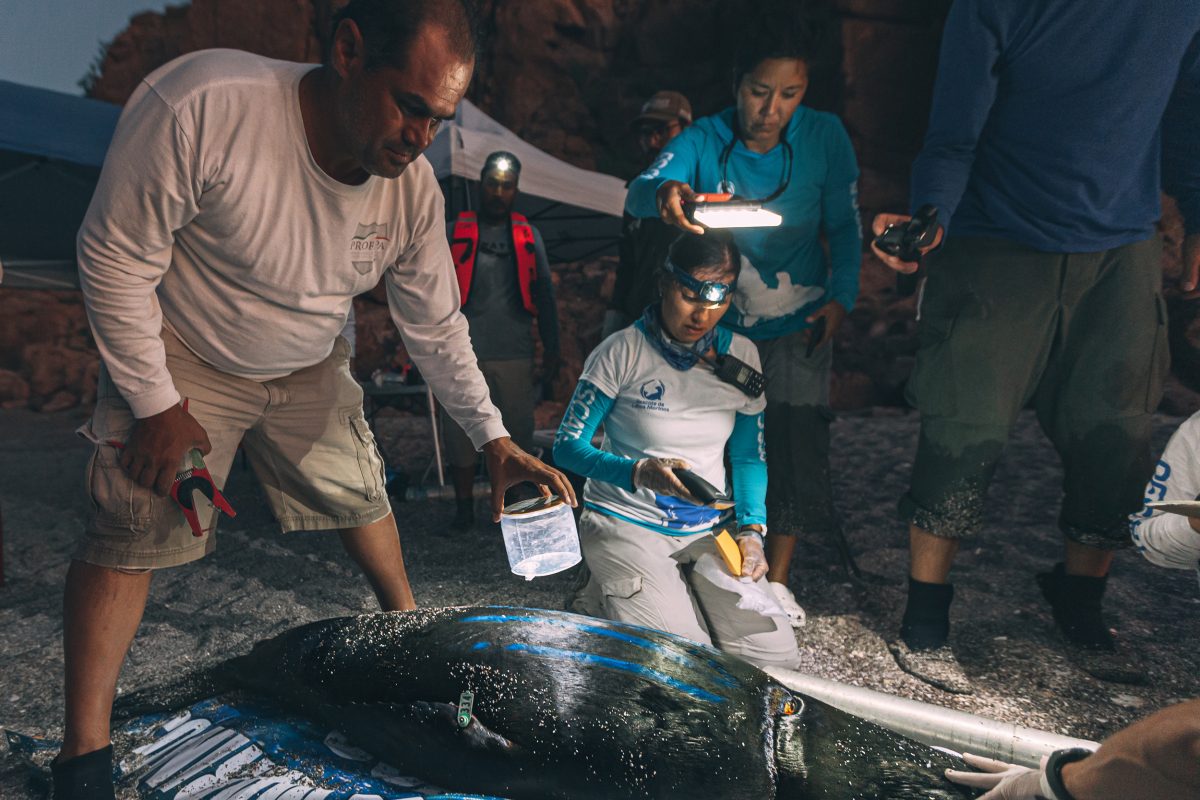 Daniela Bárcenas de la Cruz prepares to take a fur sample from Frida for a study on heavy metals in sea lions as other team members try to supply her with light. The blue paint on Frida’s back will help them identify the sea lion for the first few days after her release. 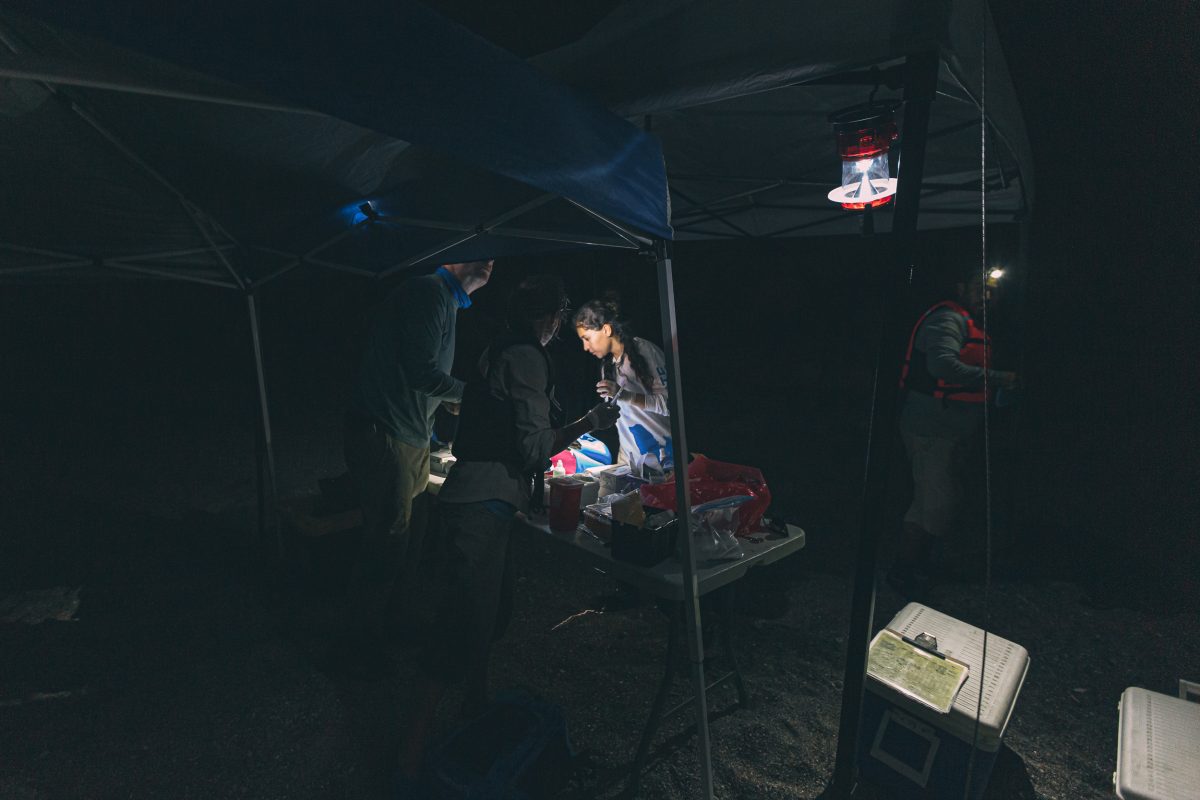 The team looks for supplies in the dark at the makeshift ER on Isla Partida, Mexico, where their temporary field station is set up. 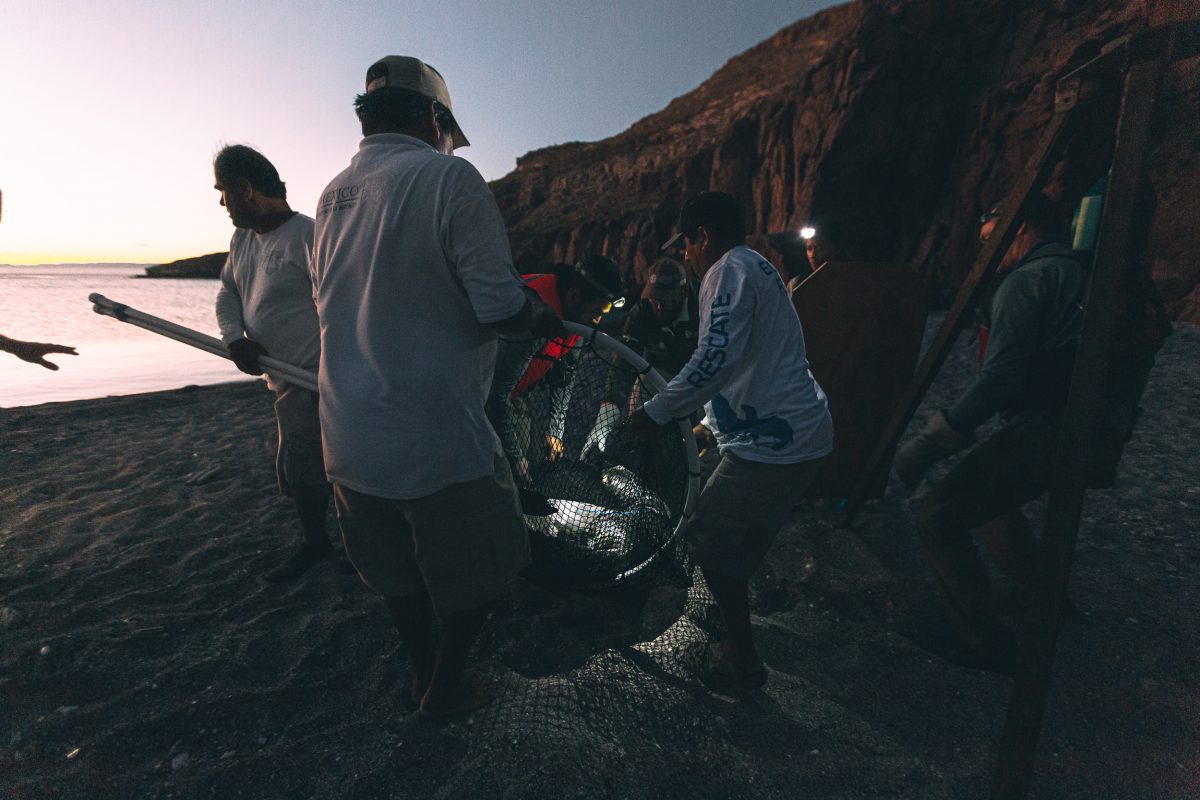 After completing the procedure, members of the rescue team carry Frida in a net back to the water’s edge on Isla Partida. 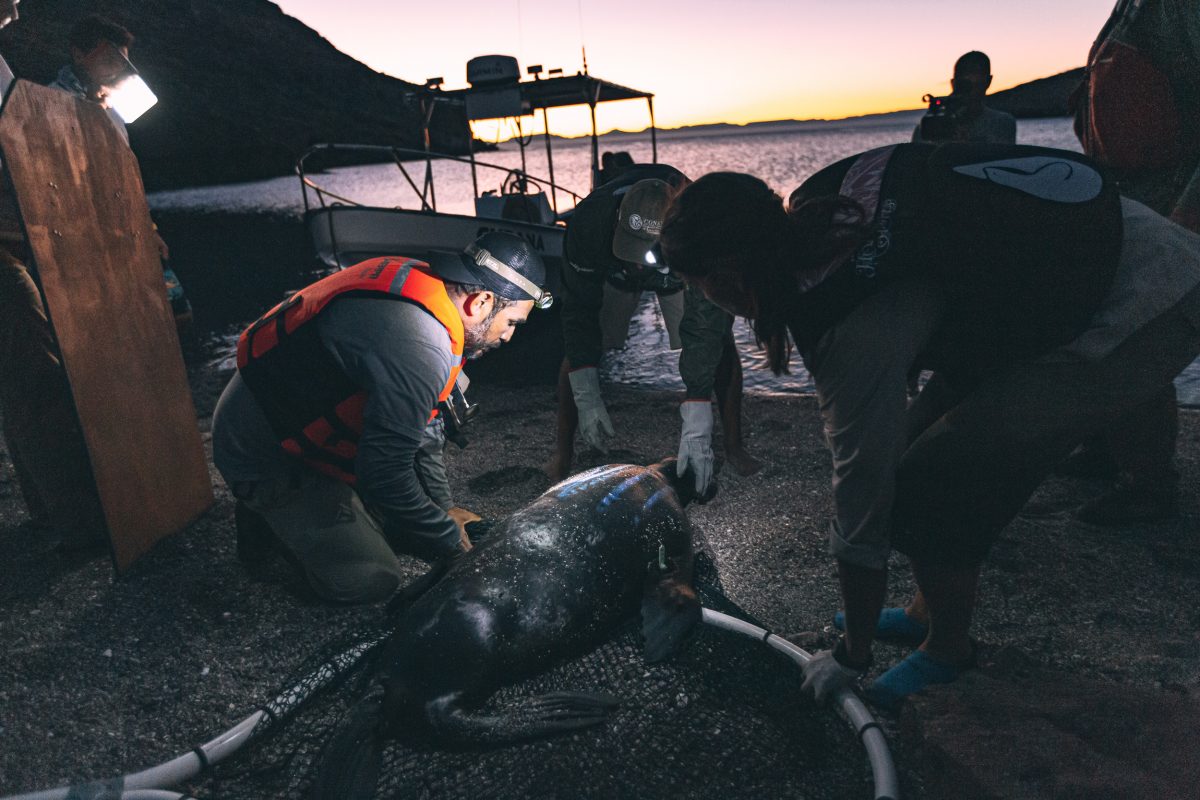 The rescuers place Frida onto the sand, so she can easily slip back into the ocean after her sedative wears off. 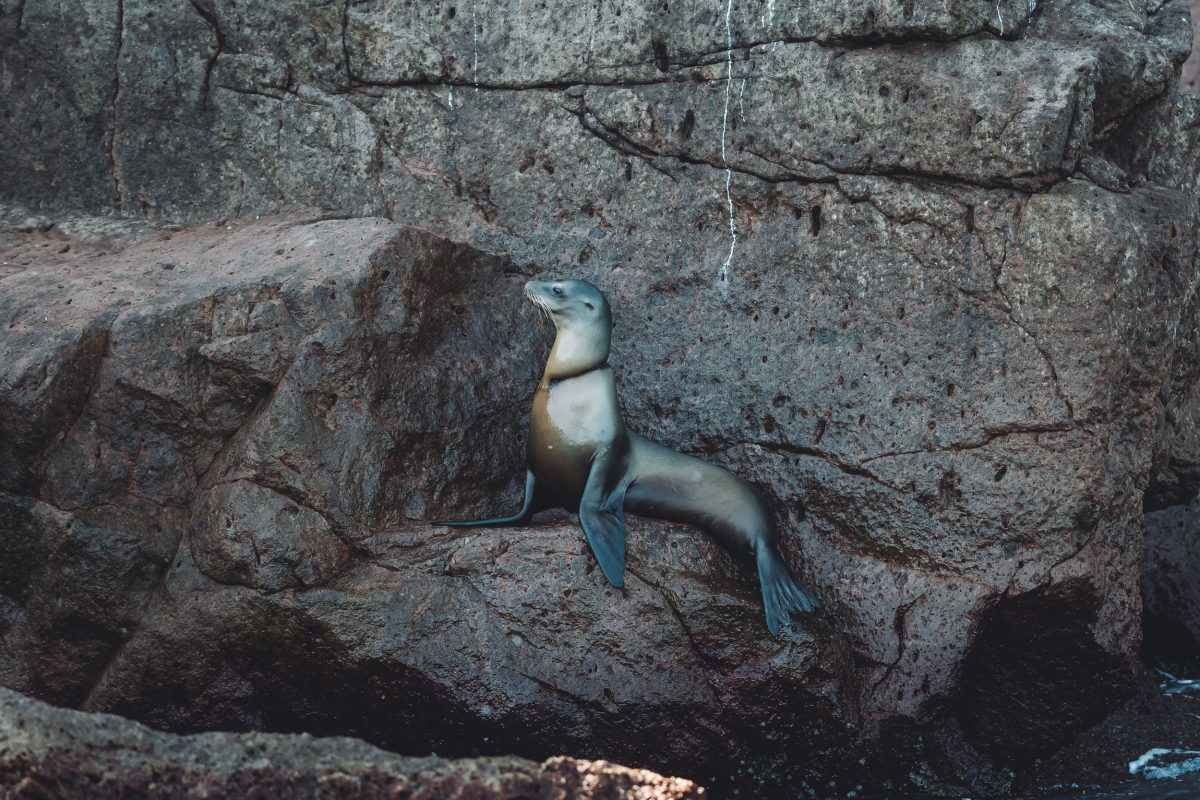 A sea lion on Los Islotes bears the scar of entanglement. The Rescate de Lobos Marinos team members say they feel a responsibility to rescue sea lions because it’s humans who leave nets and lines in their habitat. 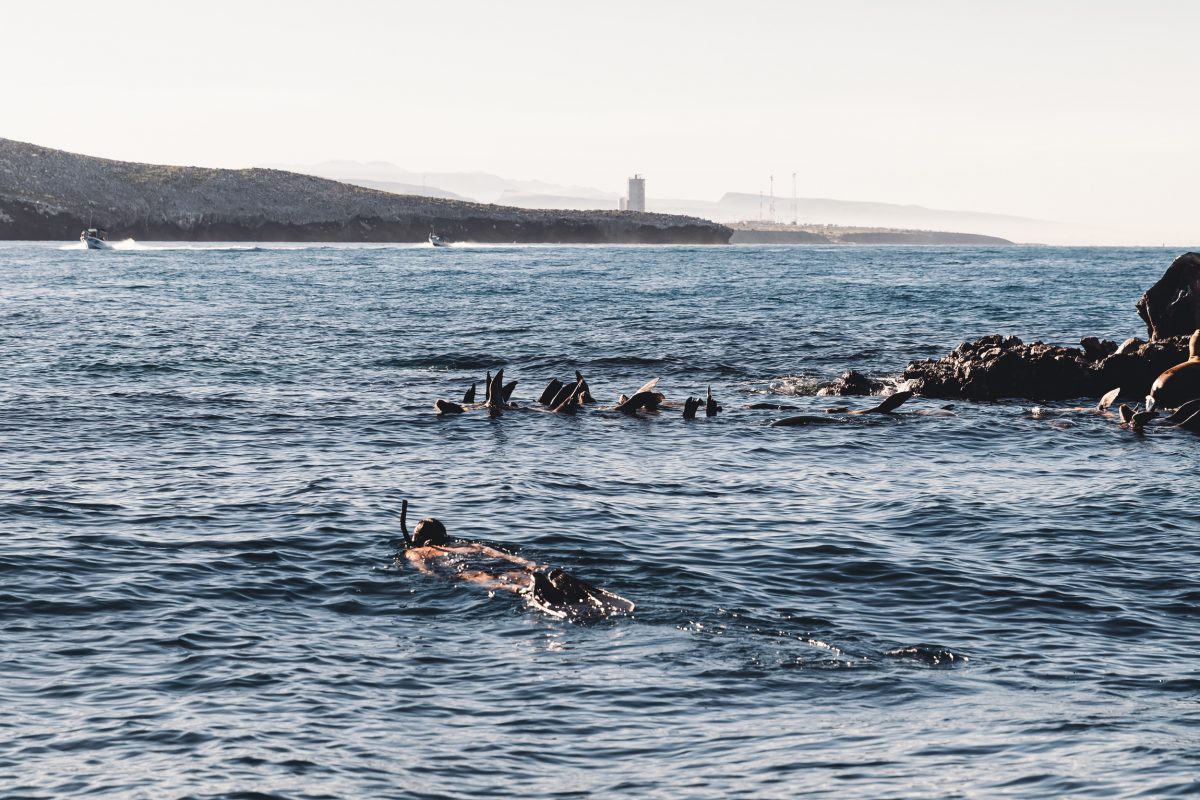 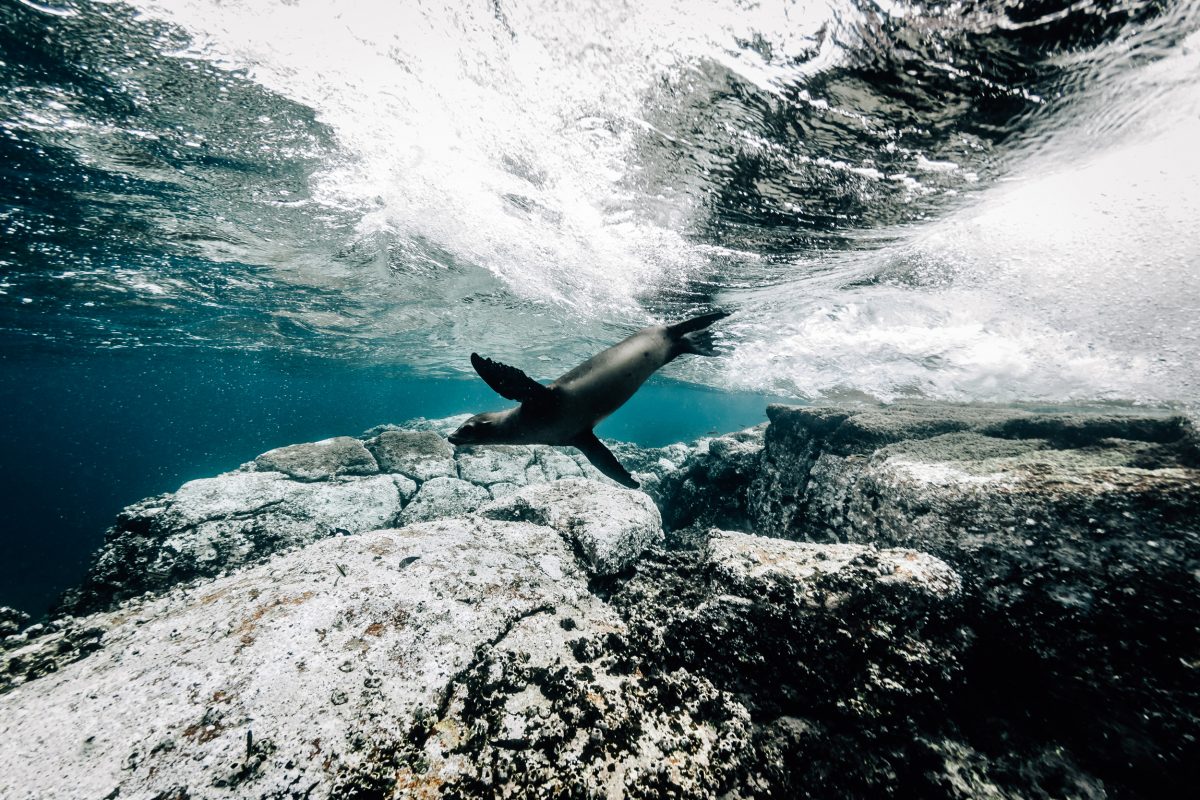 A young sea lion plays in the crashing waves at Los Islotes.