Our curiosity started with an image of an underwater mailbox in Japan. If people were putting post offices underwater, we wondered, what else had they sunk? As it turns out, a lot of things. For this photo gallery, Hakai Magazine’s art director collected images of 10 underwater experiments—poignant, frivolous, and even failed—showing some of the surprising things we sink. 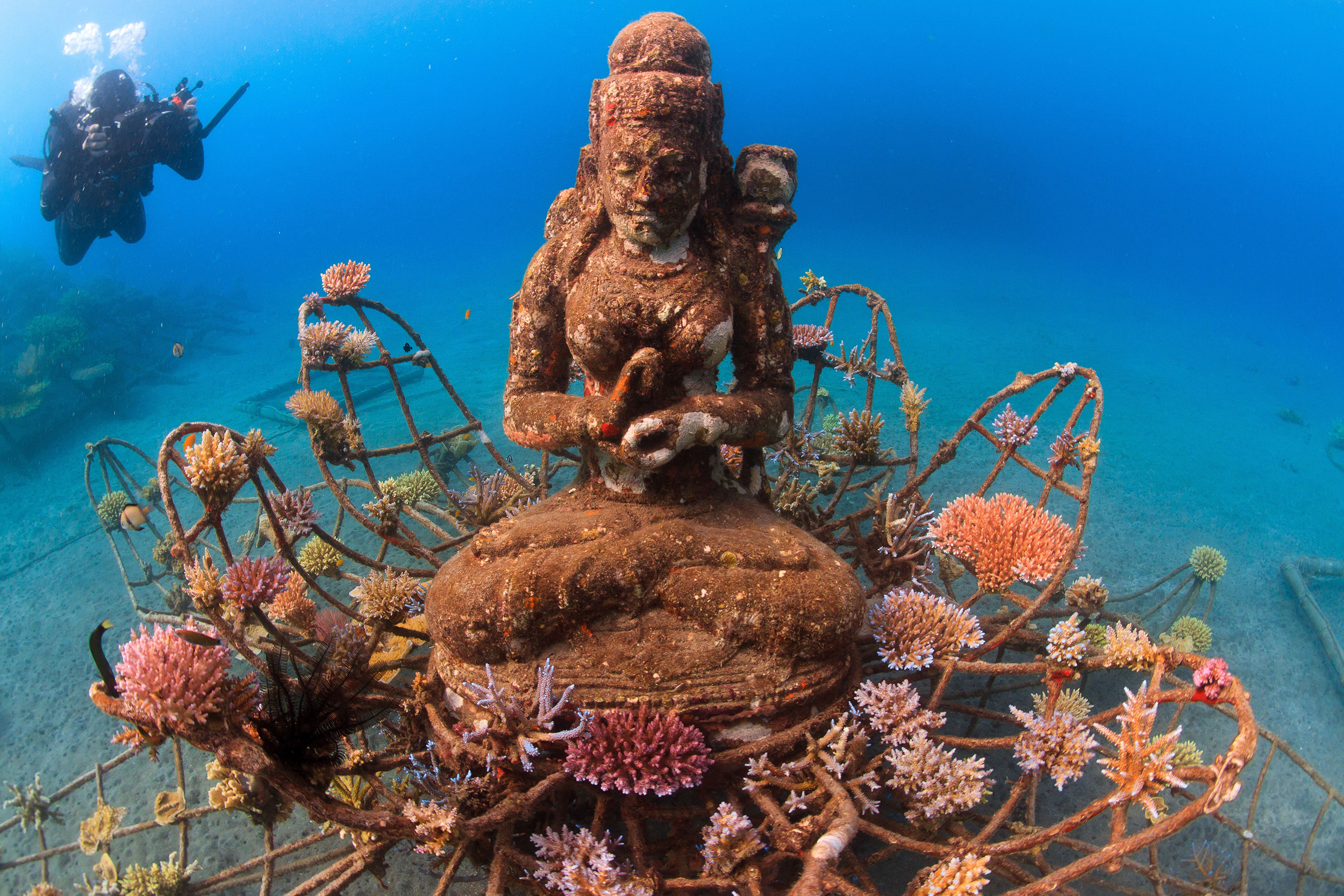 The Coral Goddess is one of many “living sculptures” in Bali, Indonesia, created by the Marine Foundation as a nursery for young coral. During its installation, the sculpture was blessed in a traditional Balinese ceremony to protect the seas and the life within them. Photo by The Marine Foundation/Eunjae Im 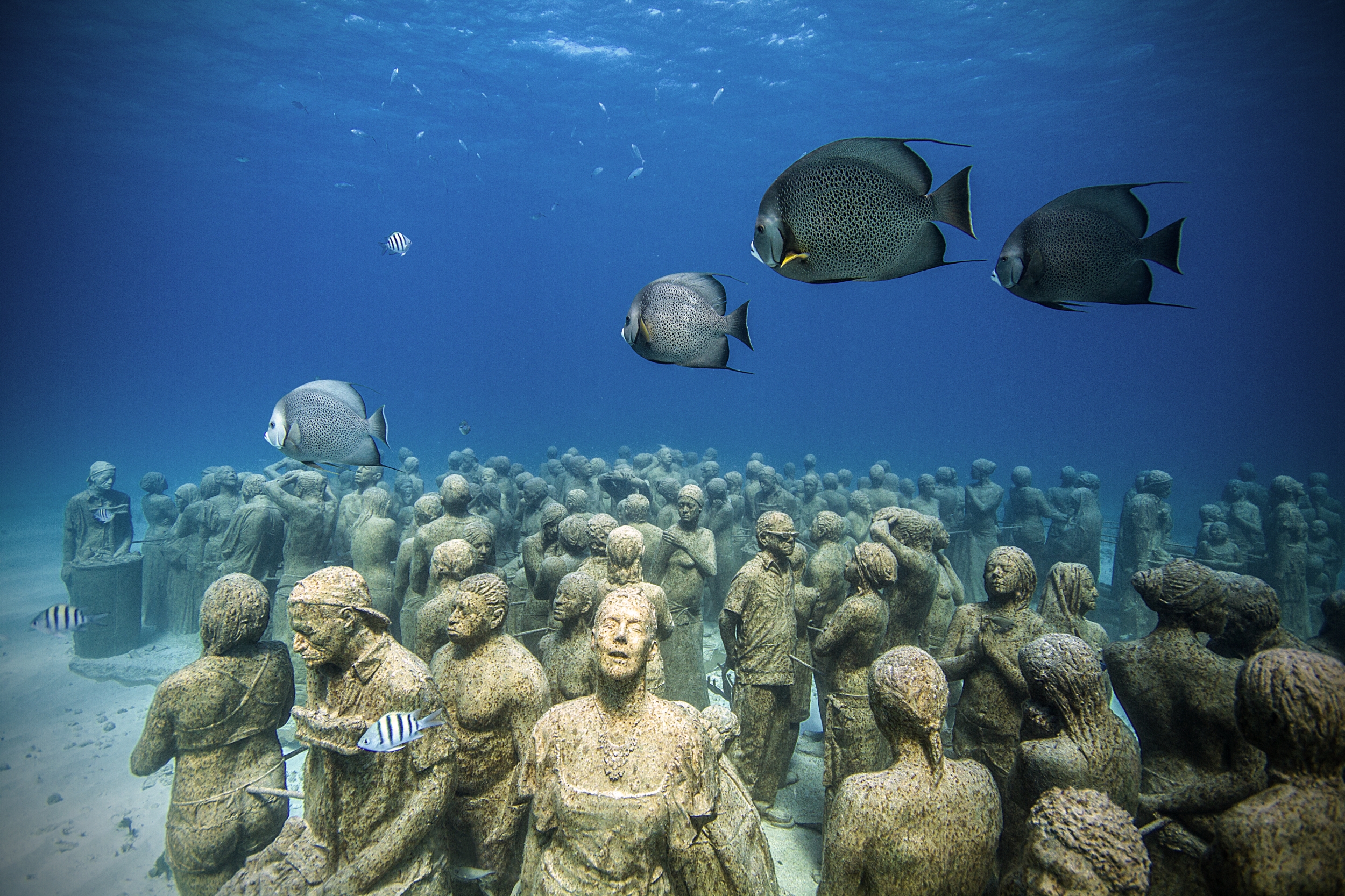 The underwater sculpture garden, The Silent Evolution, by artist Jason deCaires Taylor, was installed at a depth of eight meters off the coast of Cancun, Mexico, in 2012. Together, the 450 figures act as an artificial reef, providing habitat for sea life. Photo by Jason deCaires Taylor/jasondecairestaylor.com 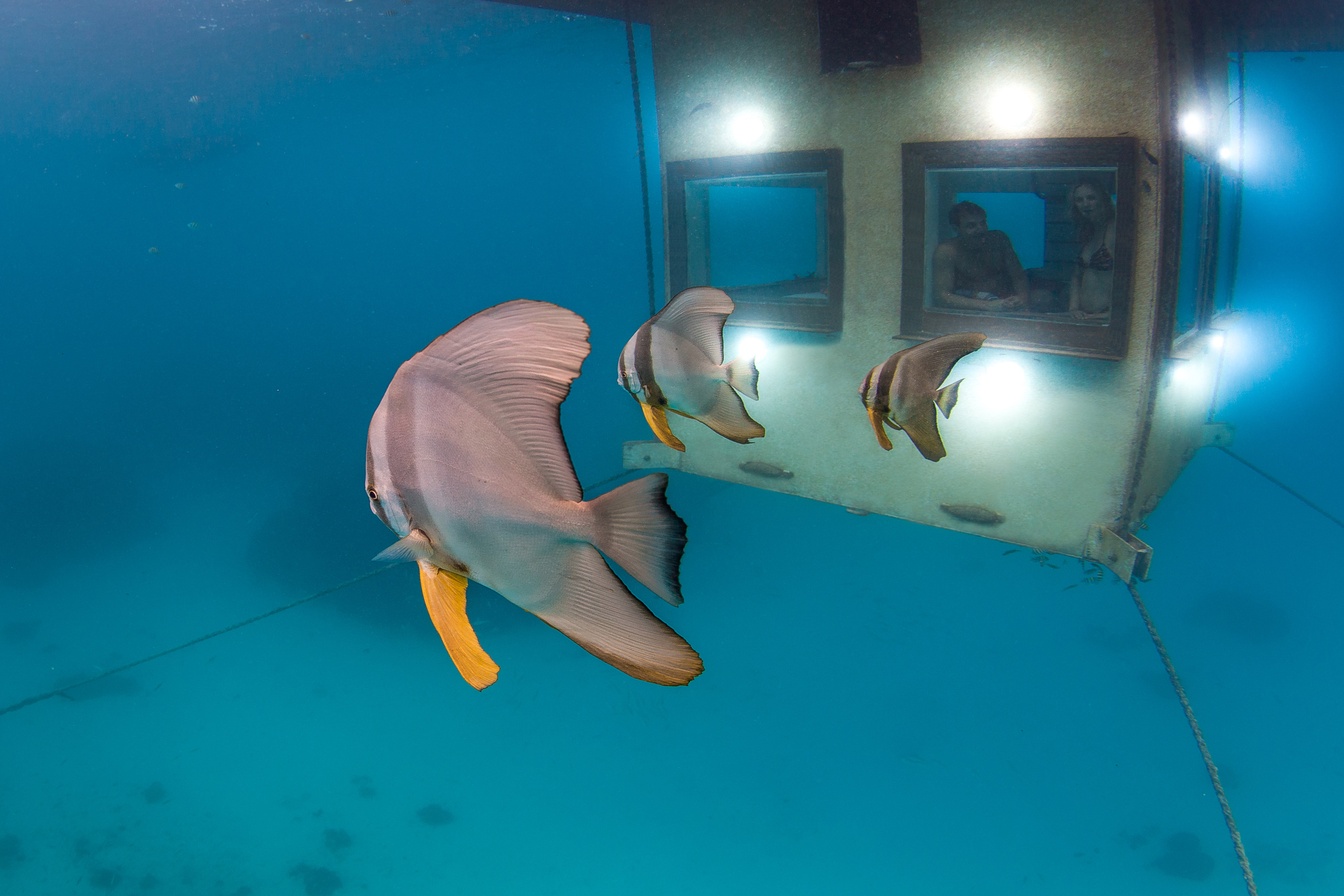 Guests at the Manta Resort on Pemba Island, Tanzania, can choose to stay in a floating suite anchored 250 meters from shore. The suite’s underwater bedroom offers a 360-degree view, replete with batfish, trumpet fish, squid, and other marine life. Photo by Jesper Anhede/Genberg Art UW Ltd. 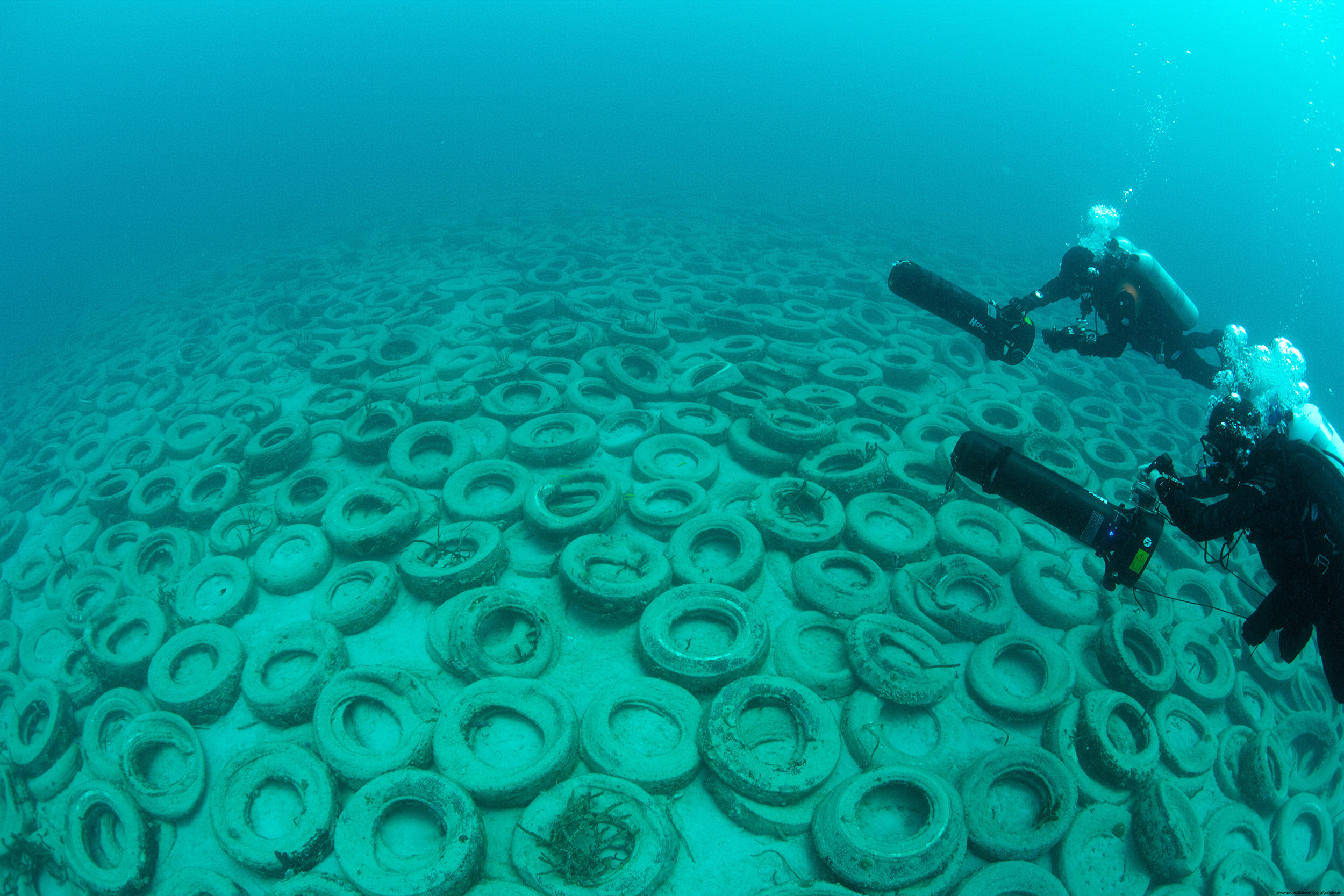 The Osborne Reef off Fort Lauderdale, Florida, was constructed in 1972 from almost two million discarded tires in an effort to create a marine habitat while diverting tires destined for landfills. Ultimately, the project failed. The tires broke loose and, despite several cleanup attempts, still cause significant damage to the surrounding natural reefs. Photo by Mikkel Pitzner/projectbaseline.org 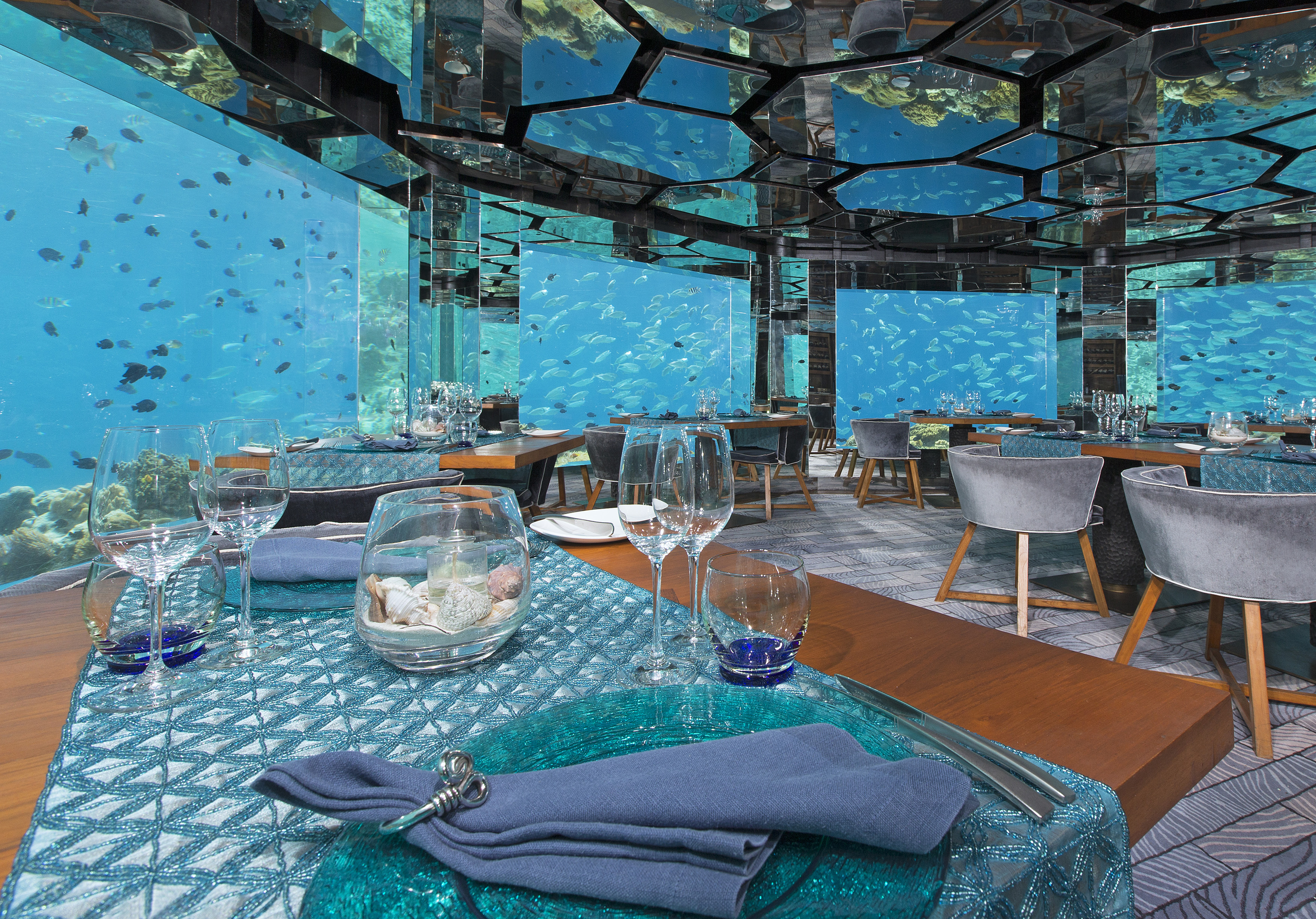 The Anantara Kihavah Villas in the Maldives is home to one of the world’s few underwater restaurants. The lower level of the resort’s four-floor restaurant is suspended in the Indian Ocean, affording diners a sweeping view of the surrounding reef. Photo by Minor Hotel Group 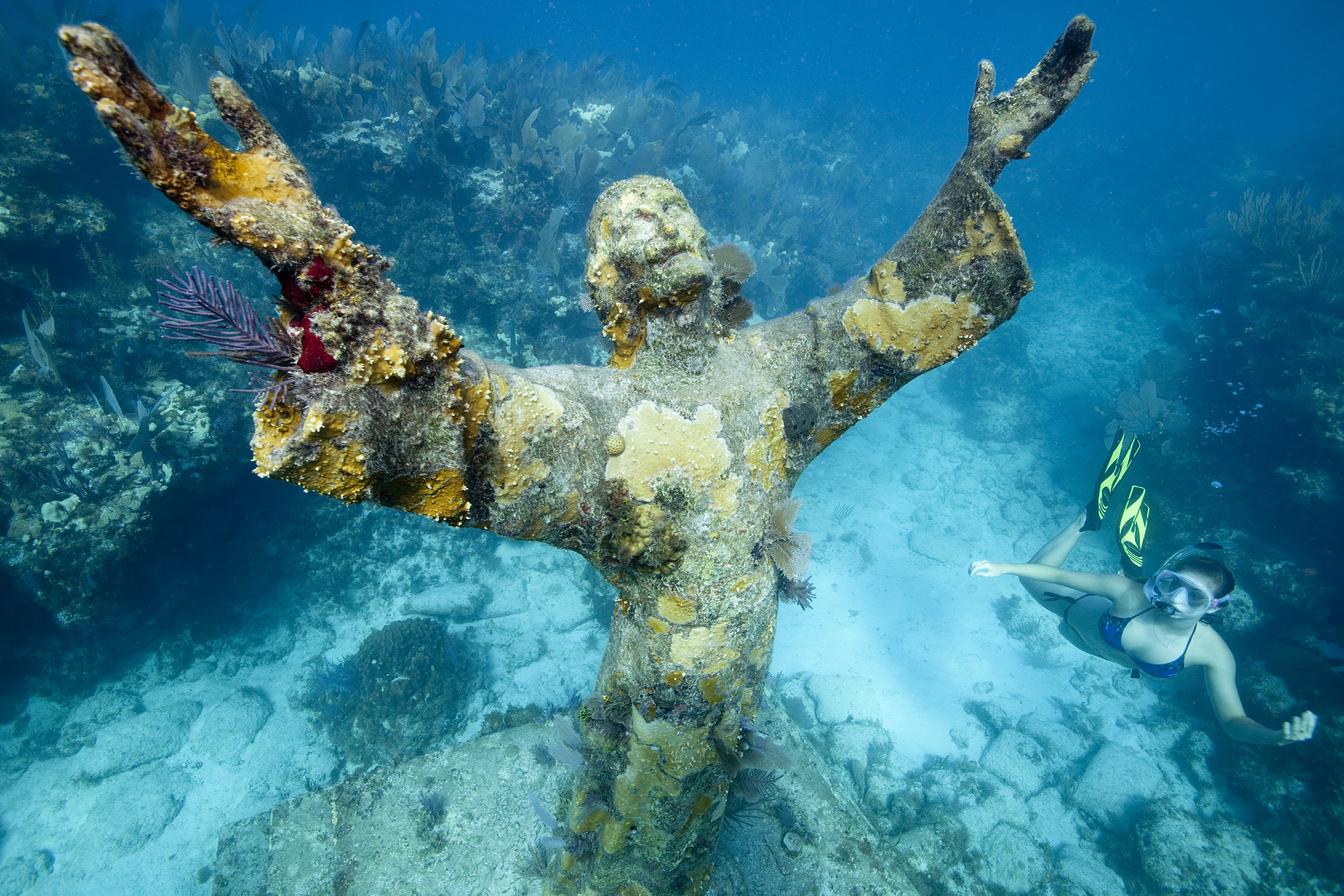 Christ of the Abyss, a three-meter-tall bronze statue, was sunk near Key Largo, Florida, in 1965. Two other statues, cast from the same mold, reside off the coasts of Italy and Grenada. Photo by Stephen Frink / Corbis 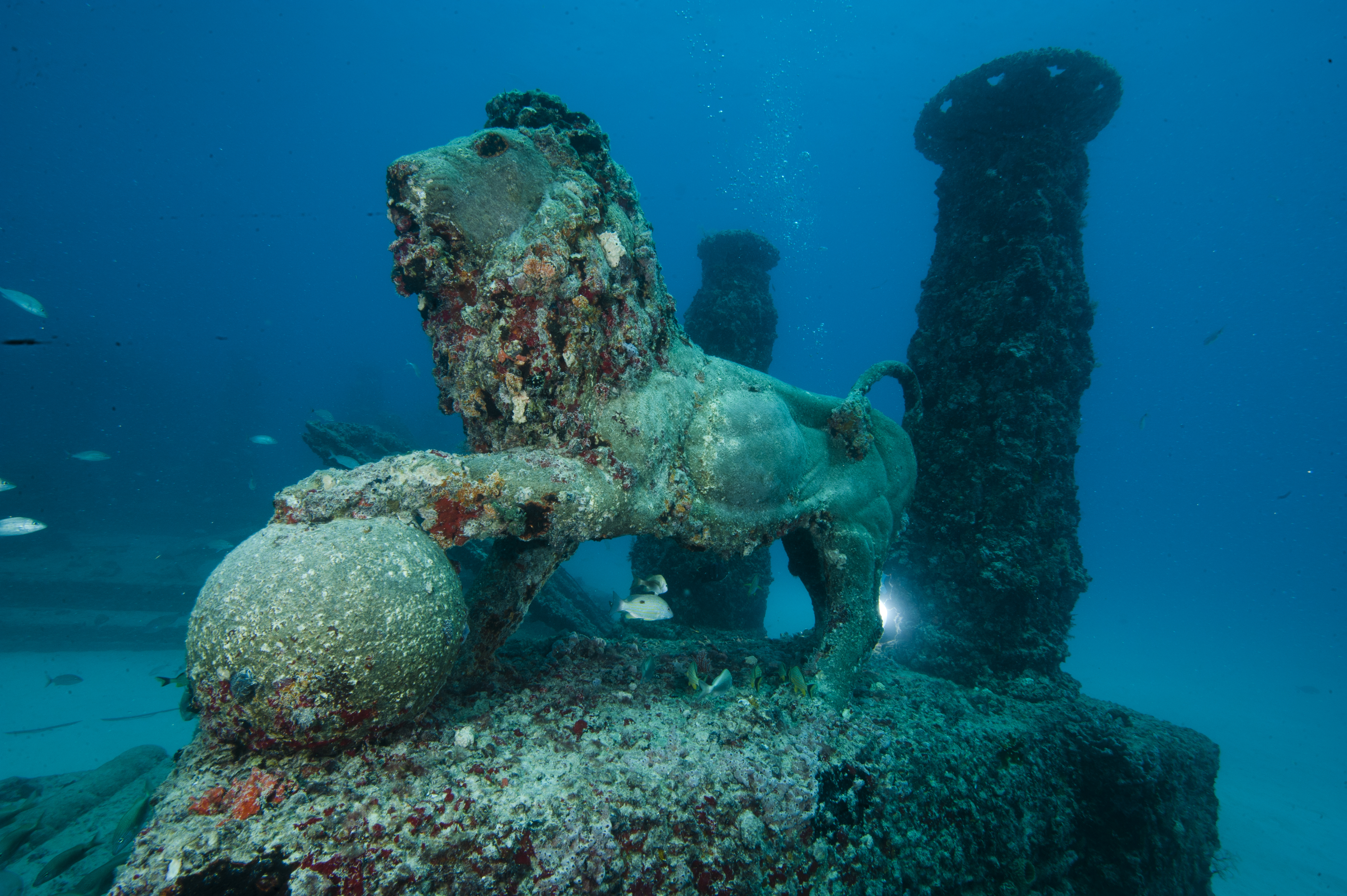 Two lion statues mark the entrance to the Neptune Memorial, an underwater memorial reef near Key Biscayne in Miami, Florida. Cremated human remains were mixed into the cement and shaped into the image of a “futuristic Lost City of Atlantis.” Photo by David Doubilet/National Geographic Creative/Corbis 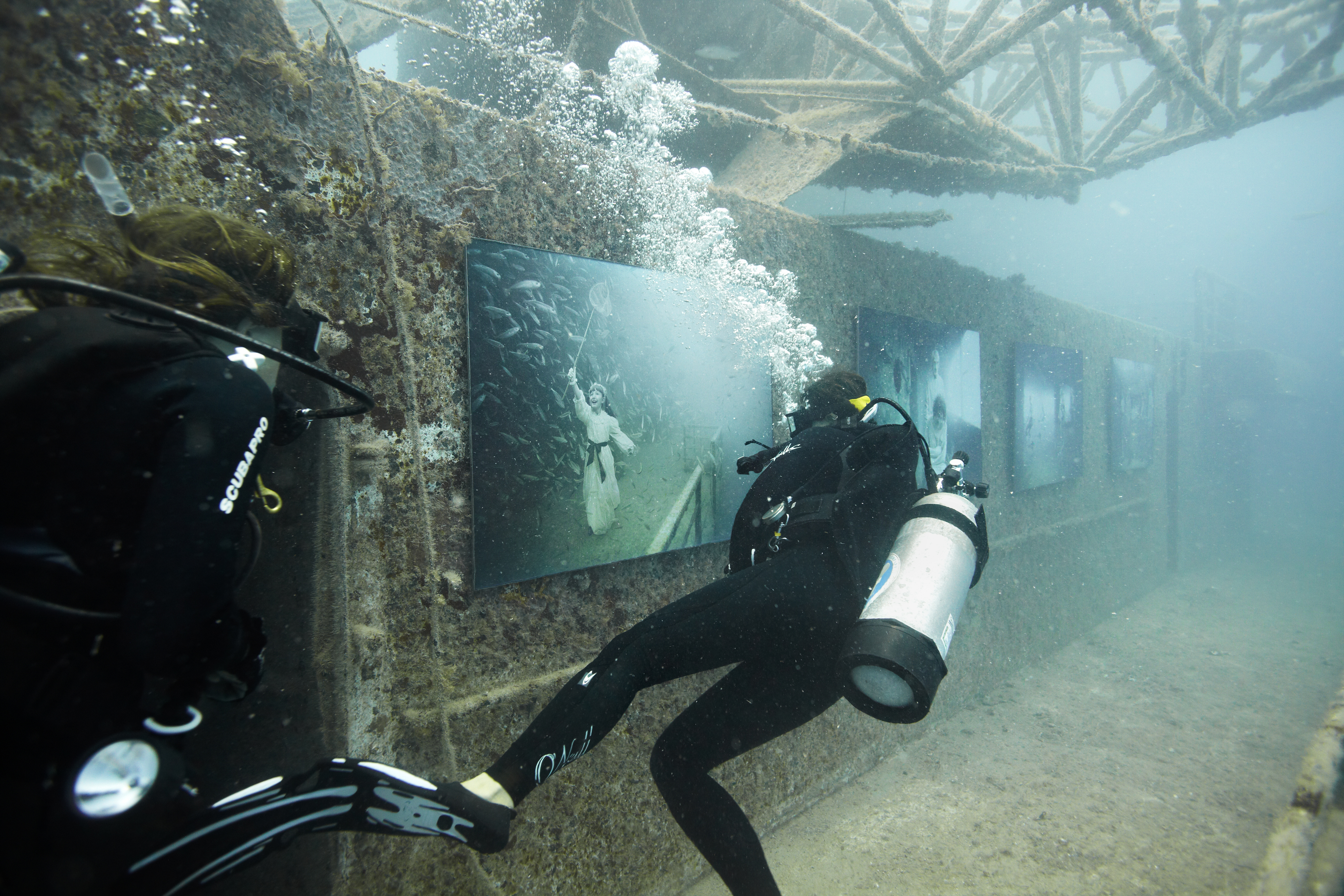 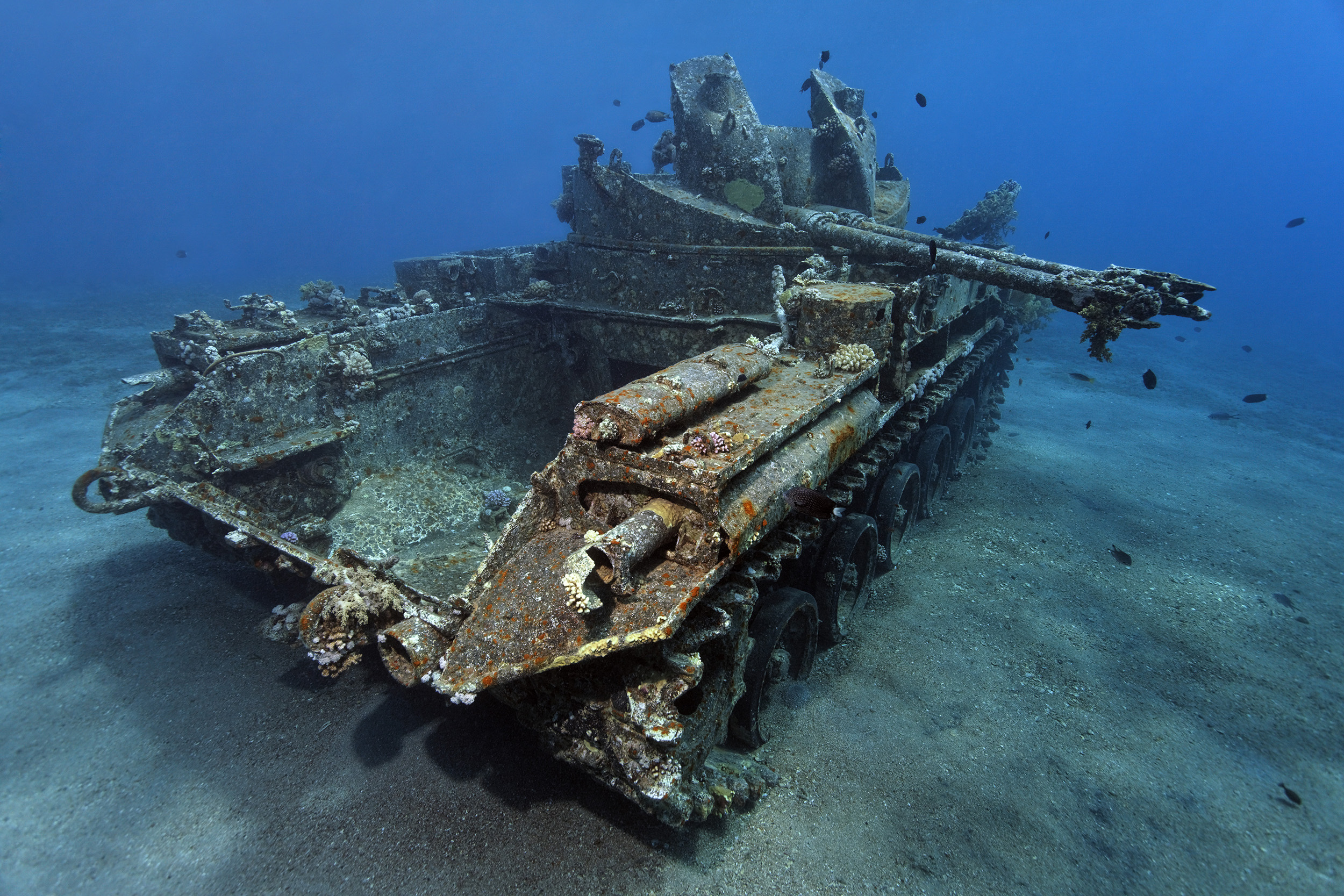 This American-made tank was once used by the Jordanian army. In 1999, it was sunk in the Gulf of Aqaba by the Jordan Royal Ecological Diving Society to create a marine habitat and tourist attraction. The tank lies at a depth of five meters, just 30 meters from shore, making it accessible to both divers and snorkelers. Photo by Norbert Probst/imageBROKER/Corbis 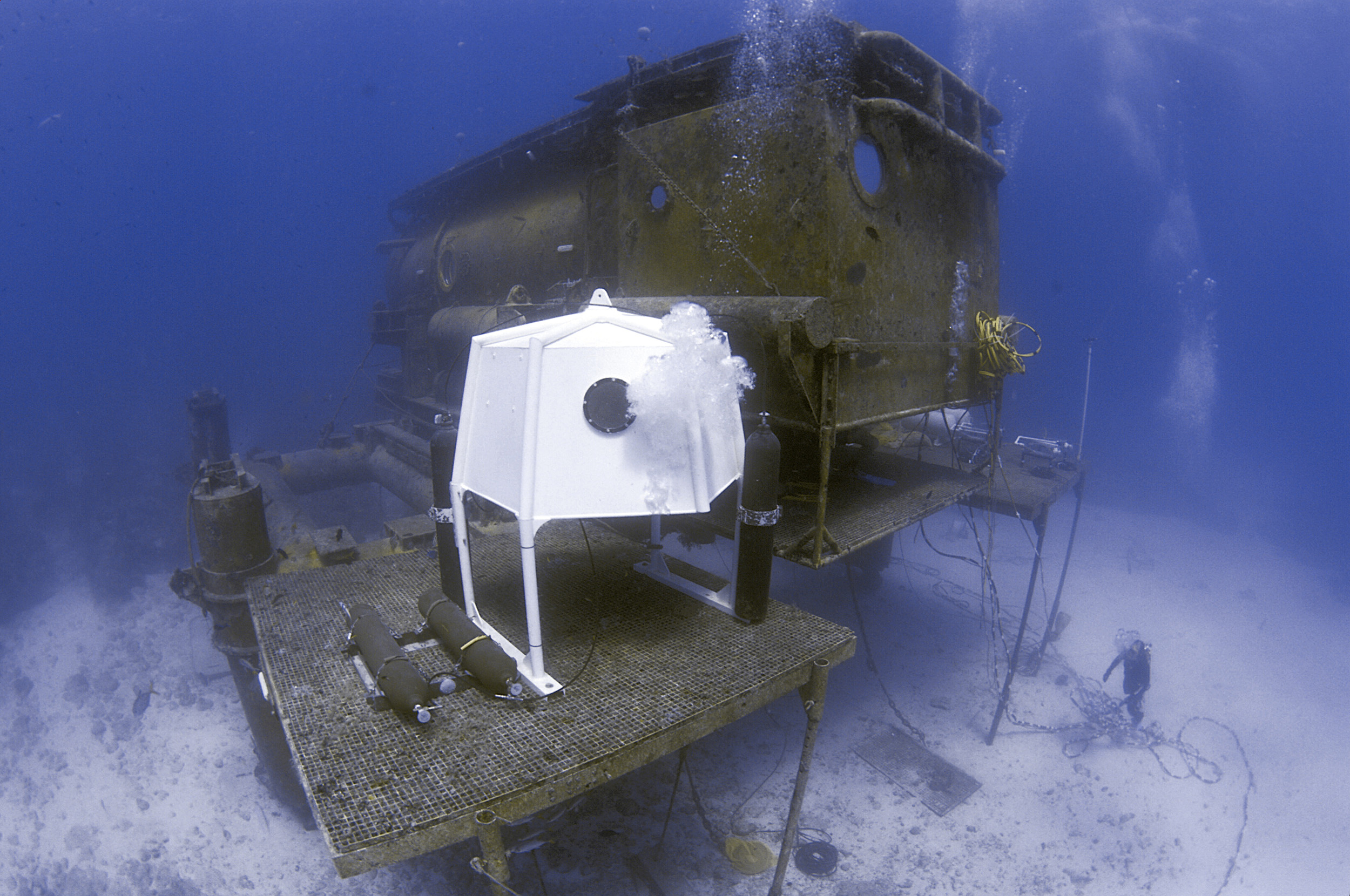 The Aquarius Reef Base in the Florida Keys was originally put in place in 1986 by the National Oceanic and Atmospheric Administration. The research station, now operated by Florida International University, is moored about 20 meters below the surface and has living and laboratory space for six “aquanauts.” Photo by Aquarius Reef Base/NOAA