Launched in April 2015, Hakai Magazine explores science, society, and the environment in compelling narratives that highlight coastal life around the world.

Our mandate is to foster a global conversation about coastlines, the places where much of the world’s population lives. These environments filter toxins, buffer erosion, and support vibrant communities of people, plants, and animals. To understand this land- and seascape, people need access to accurate, unbiased, and engaging information.

We practice journalism in the public interest and publish all of our stories exclusively online, without paywalls or ads.

Our name is inspired by Hakai Pass in the Hakai Lúxvbálís Conservancy, one of the largest protected marine areas on the west coast of Canada, located about 400 kilometers north of Vancouver. It’s a place of rare beauty and it breathes with marine life. Our stories span remote places like Hakai Pass, bustling urban centers, and occasionally, extraterrestrial oceans.

Read and share our stories. Hakai Magazine is free to all and doesn’t require a subscription, but sign up for our weekly newsletter and you’ll receive links to all of our stories.

Hakai Magazine has won numerous awards for our work. See all awards » 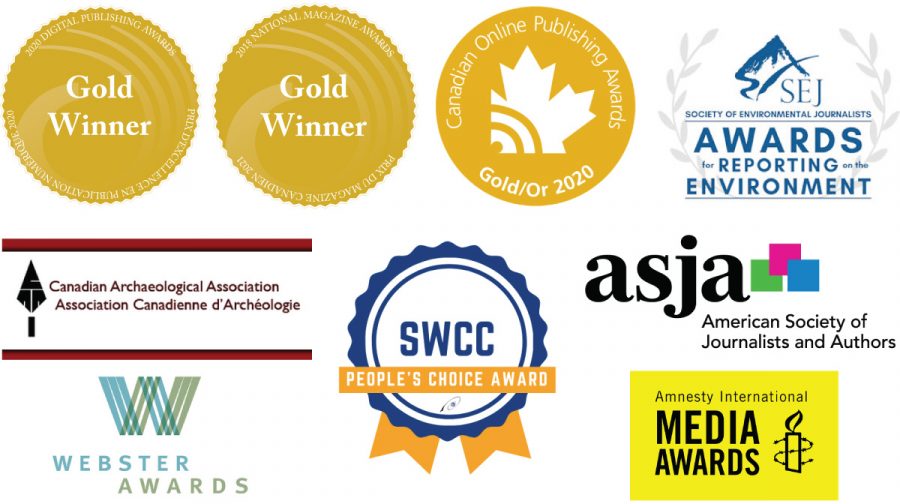 Our offices are on Wharf Street in Victoria, British Columbia, Canada. Visit our Contact Us page to get in touch.

If you are a writer, illustrator, artist, photographer, or videographer and are interested in contributing, please see our Submission Guidelines.

We believe strongly in helping to develop young journalists. Learn more about our internship and fellowship opportunities.

A man steps from the dock and onto a bobbing boat that, if it were toy-sized, would look at home in a bathtub. He pushes away from the dock, and the canary yellow “H20 taxi” putts away, shuttling tourists to their next destination. The smell of fried fish floats on the breeze and the chatter of people enjoying their lunch or strolling the wooden boardwalk punctuates the air. The scene from the deck of our office overlooking Victoria’s Inner Harbor is ever changing, the only punctual and reliable event in our busy office being the baritone blasts of the M/V Coho, a ferry that sails between Victoria, British Columbia and Port Angeles, Washington several times a day. 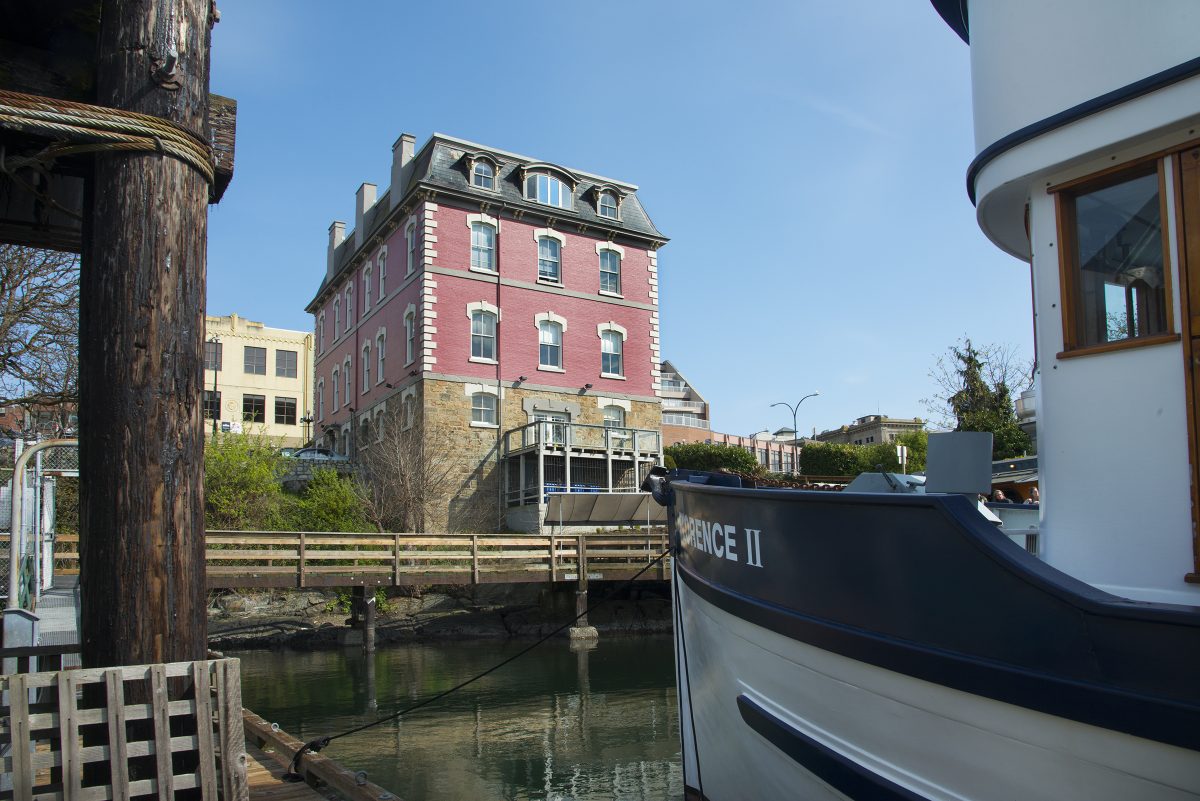 Hakai Magazine’s office on Victoria’s Inner Harbor is in the historic Custom House, built in 1874-75. Photo by Shanna Baker

From the roof of our office building, we have a 360-degree view of the ancestral home of the Lekwungen People. The harbor provided shelter from the open ocean as well as rich fishing and intertidal habitat, while the surrounding forests were prime hunting grounds and a ready source of timber and edible plants. What was good for the Lekwungen was good for the Hudson’s Bay Company (HBC), too. The company’s Chief Factor, James Douglas, recognized that the harbor’s geography and abundant resources, combined with a capable Lekwungen workforce, made a “perfect Eden,” and an ideal site for a trading post.

Were our offices here in 1843, our day’s work would be accompanied by the sound of construction as the trading post—and what would eventually be called Fort Victoria—rose next door. Trade in this corner of the HBC’s empire flourished and before long Victoria was the busiest harbor north of San Francisco.

When British Columbia entered confederation in 1871, Victoria was an established commercial center, but had no federal presence, at least in the physical sense. A building of brick and stone was one way to flex some federal muscle, so in the spring of 1874, construction of the Victoria Custom House began. The Second Empire architectural style was popular for government buildings of the era and the substantial square structure, with its mansard roof, hooded dormers, and “restrained details” established a permanent federal presence in the city.

The Custom House had a lower receiving floor, an upper level for offices, and a clear view of the harbor. The lower floor—where we work today—was the warehouse. When gold was found in the Klondike in 1897, prospectors rushed to Victoria and lined up by the hundreds at Custom House, spilling out along Wharf Street, as they waited for a mining license. After the initial rush for gold, the Collector of Customs and his staff worked out of these offices for two more years, ensuring that the federal government’s regulations were enforced and closely monitoring the goods entering and leaving the city.

As Victoria prepared to welcome a new century, the custom offices moved and the harbor master and other federal departments took over the building. In the mid-1940s, the Custom House was renamed the Marine Building and became the navy’s mess hall. In 1952, the building was renovated yet again to house the headquarters of the HMCS Malahat Naval reserve, a volunteer “citizen navy,” and given its current name, the Malahat Building.

Today, the Malahat Building is privately owned and houses four floors of offices, including those of Hakai Media. It remains the oldest surviving example of a 19th-century Second Empire federal building in western Canada and is federally recognized through the Historic Sites and Monuments Board of Canada.

Curious about what lives beneath the water in Victoria’s Inner Harbor? We were, too. Take a dive with us.

The harbor is part of the traditional territory of the Lekwungen People. The Lekwungen were attracted to the harbor area to harvest plants, including cherished camas bulbs and seafood. Sites of cultural and spiritual significance, including a burial ground on what is now Laurel Point, stud the harbor’s shoreline.

Although the Lekwungen modified the land through regular burning—a technique for maintaining camas meadows—the arrival of the Hudson’s Bay Company (HBC) in 1843 ushered in the manufactured landscape of the industrial revolution. The forests came down as Fort Victoria—with its eight buildings, two octagonal bastions, and 5.5-meter stockade—went up. As the HBC’s “grand depot” west of the Rockies, vessels regularly sailed into the harbor, unloading supplies for the company’s extensive network of interior trading posts, and loading furs and other products for export.

The settlement of less than 600 people suddenly hummed with activity in 1858 when up to 30,000 gold miners flooded through on their way to the Fraser River Gold Rush. Over the next few years a series of other gold rushes in the British Columbia interior drew more people, but by 1864 the frenzy for gold had fizzled.

By the time the last vestige of Fort Victoria was finally dismantled in 1864, Victoria was the capital of the Colony of Vancouver Island and later, in 1871, the capital of British Columbia when it became the sixth Canadian province. Just below Hakai Magazine’s offices, on land sloping toward the harbor, remains a trace from the days of the fort: three ship mooring rings. 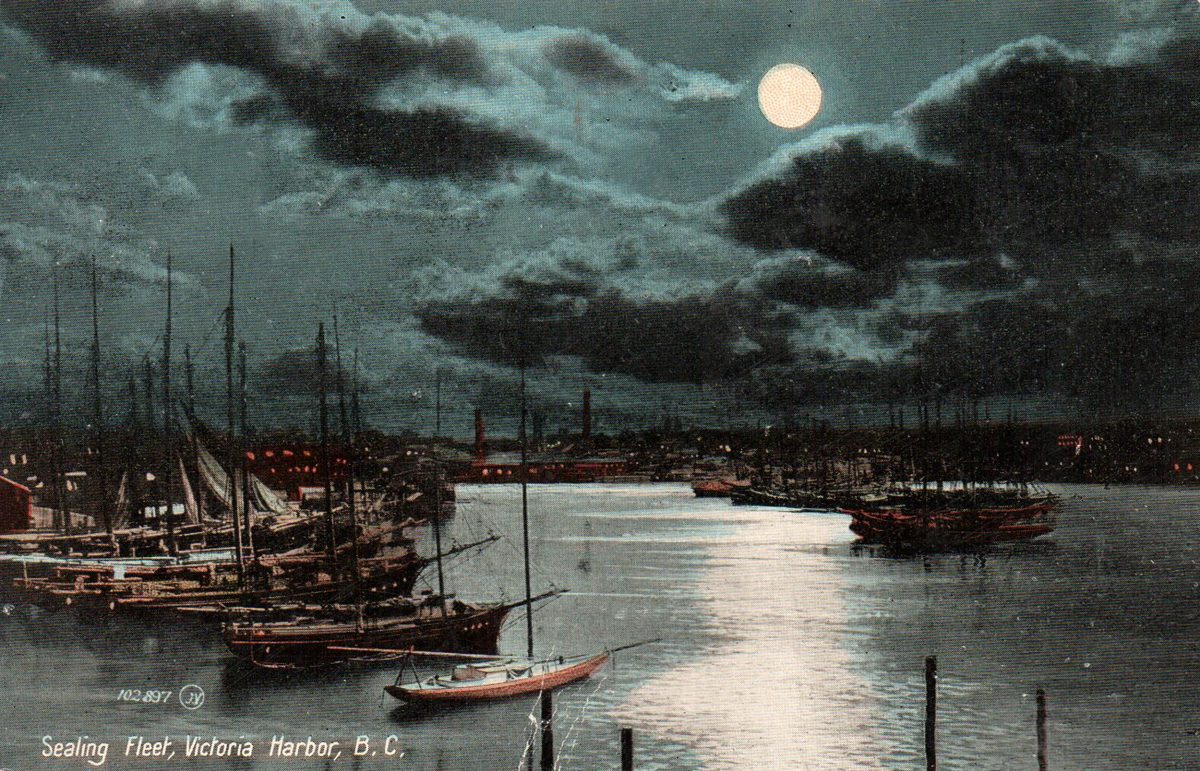 In the late 1800s, Victoria’s Inner Harbor was home port to about 100 schooners involved in the commercial fur sealing industry.

Victoria and its protected harbor continued to grow as a commercial center. By the late 1800s, the harbor was the off-season home to the Pacific fur sealing fleet. Warehouses, piers, shipyards, and iron works crowded the shores of the inner and outer harbors over the years, the assemblage morphing as real estate shifted from one venture to the next.

By the early 1900s, Victoria’s harbor was already transitioning to tourism. A regular steamship service—the Canadian Pacific Railway’s “Princess Line”—delivered people, mail, and supplies to coastal communities on a regular schedule. Ferries to Vancouver and the United States, and floatplanes, also added to harbor traffic in time. Today, condos and hotels have replaced most warehouses and industry. The harbor’s purposes may have metamorphosed, but it still remains a focal point for the city. And a great place for a magazine office.

On this urban shore in Victoria’s Inner Harbor where Hakai Magazine’s office stands, it’s easy to miss the natural world when you’re doling out dining advice, giving directions to Chinatown, or dodging tourists with selfie sticks. Out on the water, gulls scream, herons glide, and the odd seal breaks the water’s surface, but much of the harbor’s natural history is hidden. You must sleuth it out.

Below the water’s surface exists a surprisingly rich undersea metropolis populated by marine invertebrates. Much of the eelgrass that once lined the shallows is gone, but, in the murky water, shrimp wave their antennae rhythmically, “tasting” the water for food. Crabs scuttle among sedate anemones and human detritus, such as discarded cans and plastic forks. Mussels, barnacles, and feather duster tube worms stud the wharf’s creosoted pilings.

Then there are the old creeks, hidden not beneath waves but below the brick and asphalt of Victoria’s downtown core. Just north of Hakai Magazine’s office, near the Johnson Street Bridge, lies the grave of the Johnson Street Ravine. More than a century ago, the ravine drained a marsh about 500 meters inland, and ran along the south side of what is now Canada’s oldest Chinatown. As the urban landscape grew, city workers filled the ravine and rerouted the creek underground. Today, it unglamorously drains into the harbor below the bridge via a storm water outfall.

Here, too, a determined sleuth could find one of the last exposed stretches of the original shore. Past the sidewalk near the bridge, a narrow, neglected strip of bedrock slopes to the water, shrouded in moss, sprigs of licorice fern, and snowberry shrubs. The scant greenery is not the botanical bonanza of the past, when a mosaic of Douglas fir, rusty arbutus, gnarled Garry oak, willow, salal, and other vegetation covered the land.

Heading south, the outcrop vanishes beneath Victoria’s old seawall, which extends to the causeway in front of the Empress Hotel. In the city’s early days, a wooden bridge connected downtown Victoria to James Bay, providing a muck-free passage over an expansive mudflat, which was rich habitat for marine invertebrates and wading birds. In the early 1900s, a stone causeway replaced the bridge and over 300,000 tonnes of fill spread over the landward side, converting the mudflat to a building site for the Empress Hotel. At the same time, a creek that once flowed onto the flats was yoked into storm water service.

But those mudflats still exist—sort of. A peek into the hotel’s basement reveals 55 huge concrete pillars and, beneath them, about 2080 Douglas fir pilings driven deep into mud support the hotel. The still-muddy ground keeps the wood wet and the rot at bay. 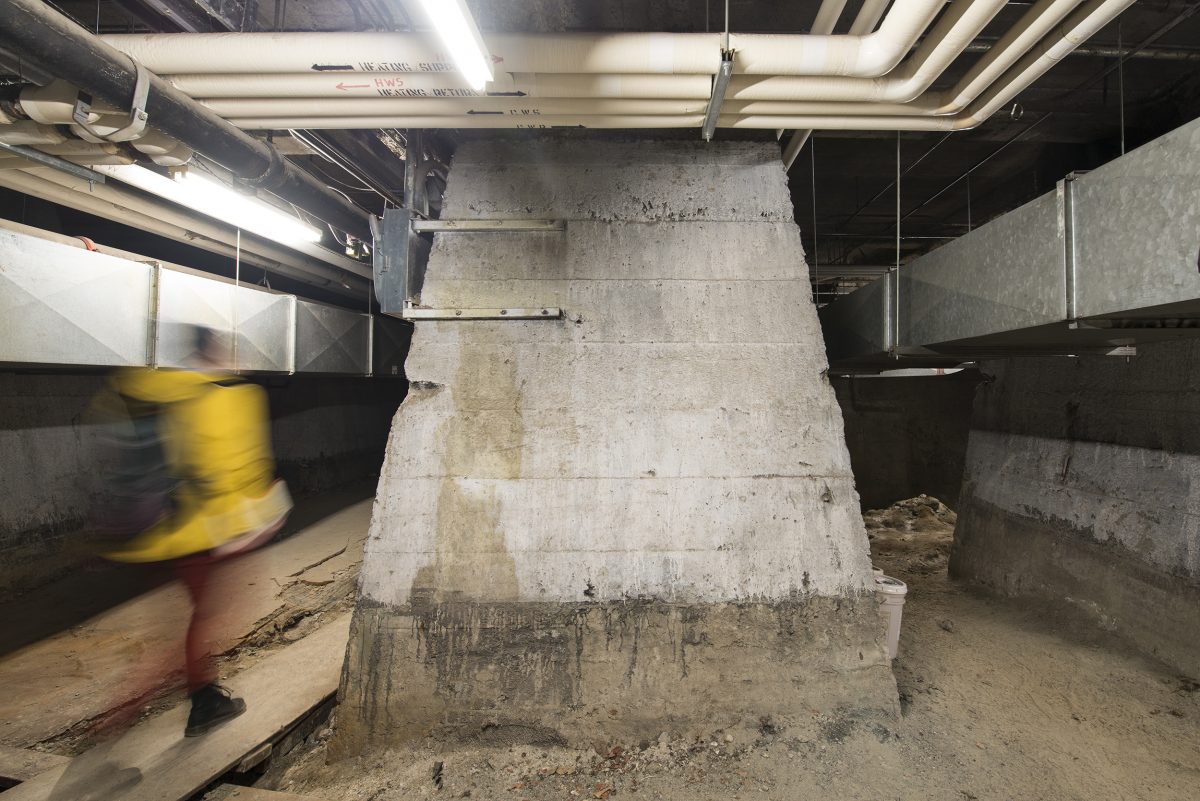 The land beneath the iconic Empress Hotel, on the shore of Victoria’s Inner Harbor, was once tidal mudflats. Photo by Shanna Baker

Wander inland from the Empress and you find Beacon Hill Park, an urban park that protects a small patch of the rare Garry oak ecosystem, with its distinctive twisted trees and wildflower meadows. The Lekwungen People have lived in the area for thousands of years, and they used controlled fires to maintain these meadows and cultivate important plants, including camas with its edible and highly prized bulbs.

It may look completely urbanized, but amid the ferries, seawalls, and storefronts, you can still spot clues to the ancient shore beneath. You just need to pay attention.