The Florida reef gecko could lose up to 85 percent of its wild habitat as the ocean rises. Photo by Nature Picture Library/Alamy Stock Photo

This story originally appeared in Mongabay and is republished here as part of Covering Climate Now, a global journalism collaboration strengthening coverage of the climate story.

At just five centimeters from nose to tail, the Florida reef gecko is so frail that handling it with bare hands is enough to tear its skin. That makes catching it a tricky task: to do so safely, biologists wiggle their fingers in the leaf litter and look beneath cover—such as sabal palm fronds or debris, like wood—to spook any geckos-in-residence. Once they spot movement, they block off the area with their forearms and clear as much litter as possible, creating a trap. Then, they gently guide the gecko into a vial not much bigger than itself—all touch-free.

“These geckos are really, really fast,” said Emily Powell, a gecko expert and evolutionary biology doctoral candidate at the University of Miami in Florida. “Your eyes have to be trained to [catch] that movement.”

It’s difficult, taxing, sometimes frustrating work, but it may just save the species from extinction, because while the reef gecko may be able to dash away from curious scientists, chances are it’s not outrunning climate change.

“If we hadn’t been interested in [this species] we would have just continued going about having absolutely no idea that they were potentially declining,” said Stephanie Clements, the lead author of a recent study in Biodiversity and Conservation and a doctoral student at the University of Miami studying conservation biology.

Clements and Powell’s paper is the first to assess the status of the Florida reef gecko (Sphaerodactylus notatus notatus) in Florida. The animal is a subspecies of the brown-speckled sphaero (S. notatus), a member of the dwarf gecko family that occurs in the Bahamas, Cuba, and the southernmost part of Florida, including Miami and the Florida Keys.

By comparing its vulnerability with that of other at-risk reptiles and amphibians in the United States, the authors concluded it’s the most vulnerable reptile in the nation to sea level rise due to its dependence on low-lying coastal habitats.

Clements and her team surveyed 58 sites from Miami to the Florida Keys, including sites where the geckos were documented in the past and those with suitable habitat. They found geckos at just 41 percent of the sites in total, and discovered the geckos are absent from nine historical sites, indicating a population decline over the past century.

The authors estimate that a sea level rise of 2.2 meters, based on a 2015 forecast study looking at carbon emissions and energy infrastructure, would put 85 percent of the gecko’s suitable habitat underwater. The finding may help inform the International Union for Conservation of Nature Red List database’s regional population information, where the conservation status of the species across its entire range is ranked as least concern.

The Florida reef gecko may be a master at surviving periodic flooding, according to researchers. It displays habitat versatility and its eggs are more salt-tolerant than adults. The geckos have also been found taking refuge in trees and urban structures, such as parking lots and buildings.

“But sea level rise is a whole different ball game because that would be a permanent habitat change,” Powell said. 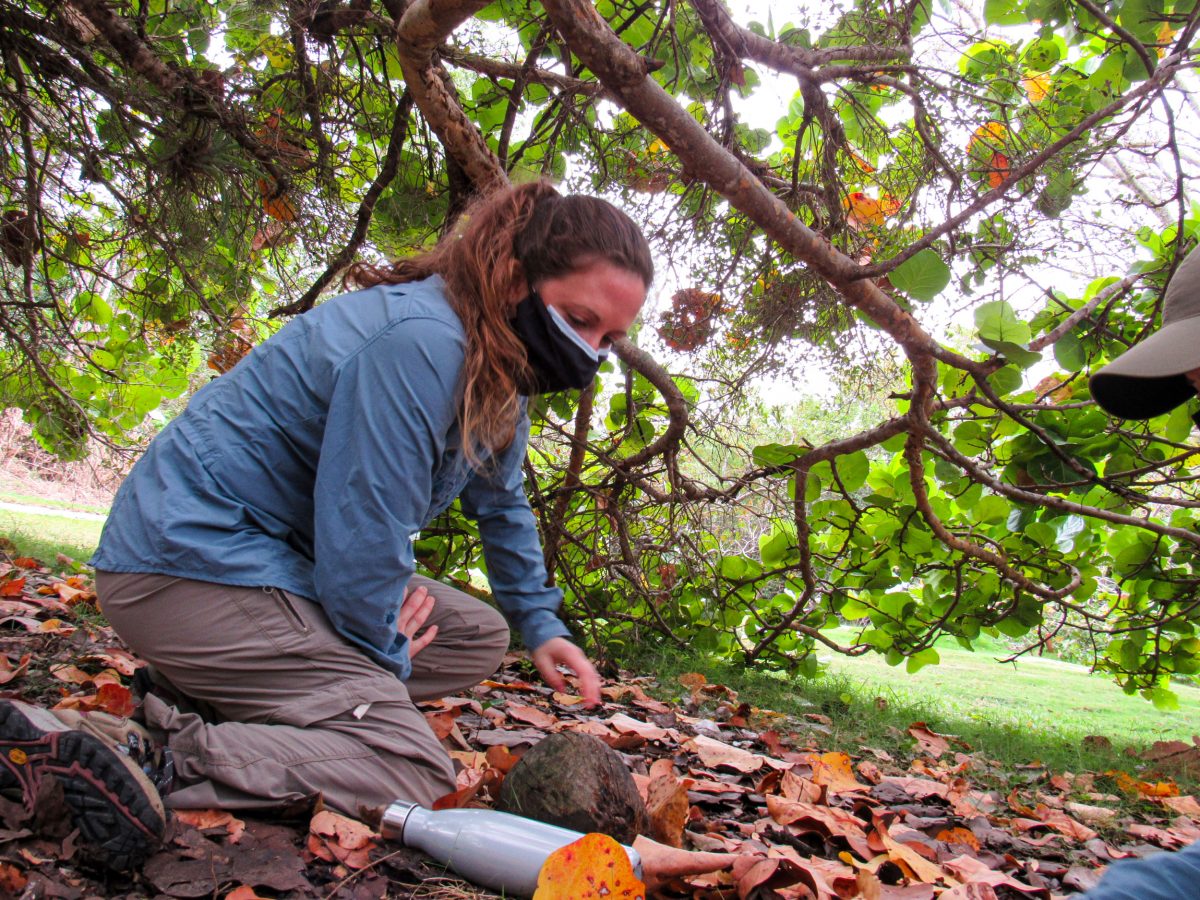 Stephanie Clements searches for geckos beneath a seagrape tree. Photo by Marlowe Starling

Life as a Gecko

The Florida reef gecko is an underdog: small, vulnerable, unpopular, but surprisingly robust.

Dwarf geckos have binocular vision, meaning their eyes work independently, sort of like a chameleon’s, to spot prey while keeping one eye (literally) on predators. Round, sticky toepads give the lizards their grip, and these charismatic toes also give the genus its name, roughly translating from Latin to mean “ball-fingered.”

“[The genus is] mega-diverse, they have this really cool biology, they’re charismatic,” said Tony Gamble, a herpetologist and assistant professor of biology at Marquette University in Wisconsin. “And from a scientific standpoint, they’re really good models to study evolution.”

Powell, who jokingly refers to herself as “Lady of the Geckos,” has spent hours in the field searching for, catching, and collecting data on brown-speckled sphaeros across southeastern Florida and the Bahamas. She said there are several differences between the Bahamian populations and those in Florida, including their size and coloration. For example, both male and female geckos in Florida can have three stripes on their heads, making it difficult to visually tease the sexes apart. Subspecies in the Bahamas, however, exhibit stronger sexual dimorphism, or differing characteristics between sexes. Bahamian populations also tend to be more colorful.

The brown-speckled sphaero lays one massive egg that can weigh up to a third of its body weight. While this implies a slow reproductive process, the geckos also occur in high densities, making for a complicated assessment of how well populations may be capable of rebounding after catastrophic events like a hurricane.

For the tiny gecko, it’s a big world out there. Survival in a rapidly changing coastal environment, imperiled by rising seas due to climate change is no easy feat. 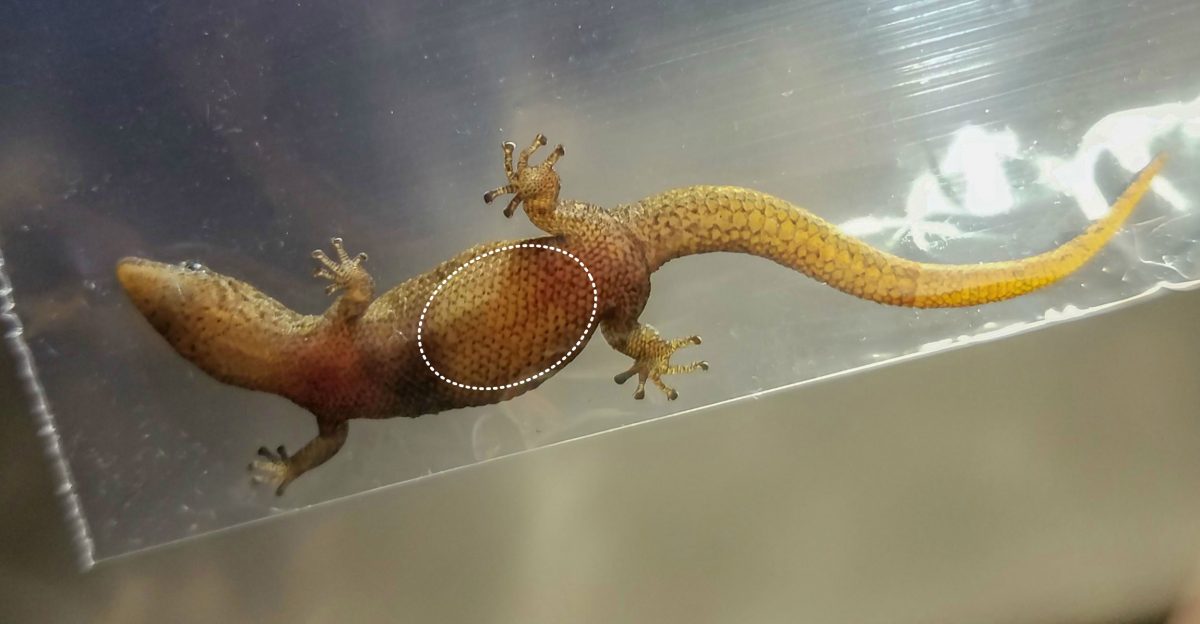 The Florida reef gecko lays only a single egg in a reproductive season. Photo by Emily Powell

Sea level rise is the most obvious threat to the Florida reef gecko, a coastal specialist that desiccates easily and thrives on humidity. But the combined effects of other factors could make for an even more uncertain future.

The gecko’s small size makes it an attractive snack for virtually any animal that can fit it in their mouth, Powell said. Other lizards, birds, snakes, even centipedes are all potential predators—many of which happen to be invasive in Florida. Invasive brown anoles, for example, are known to eat Florida reef geckos.

Other invasive species pose threats beyond predation. The Australian pine (Casuarina equisetifolia), a tall species of she-oak, smothers native plants and shrubs in shade and needles, killing the plants that reef geckos depend on. Another invasive species, the ashy gecko (Sphaerodactylus elegans), may be outcompeting its Florida reef gecko cousins for habitat and resources in Key West.

Lots of species living in coastal habitats are also vulnerable, Powell said, because those areas are often heavily impacted by human activity, such as development for desirable real estate. Every three in four Florida residents live on the coast, according to data from the National Oceanic and Atmospheric Administration, with nearly 1,000 people moving to the Sunshine State every day.

The geckos do have one advantage, according to Nielsen, who was not involved with the study: “They can live in lots of different types of habitats, both natural and disturbed.”

Still, without more research, many factors remain unknown. For example, scientists know little about the geckos’ salinity tolerance, how far they can travel, their resilience to storm surges and flooding, or even their full genetic profile.

Although their study focuses on Florida, Clements said the population decline and threats could imply that conservation efforts are also required throughout the rest of the species’ Caribbean range. Island nations at high risk of climate change impacts, she said, often lack the funds and resources to conduct research on an obscure dwarf gecko species.

“There are these compounding effects of us just not knowing anything, and then also having all of these extra risks,” Clements said.

And the reef gecko continues to keep scientists on their toes. Biologists have documented surprising fluctuations in population densities, especially before and after hurricanes. Nielsen said the geckos’ reliance on microhabitat might play a role, such as their affinity for seagrape (Coccoloba uvifera), a native coastal plant with broad leaves that block sunlight, creating a damp understory with plenty of leaf litter to shelter in.

Nielsen said he didn’t spot a single gecko in a park on Key Biscayne, off the coast of Miami, for a couple of years after Hurricane Irma in 2017. But once seagrapes returned to the park, so did the geckos.

“As long as seagrape survives, I think it stands a chance,” Nielsen said. “I think they’re far more resilient than we probably give them credit for.”

The invasive ashy gecko from Cuba may be outcompeting the Florida reef gecko in Key West, Florida. Photos by Stuart Nielsen

Saving a Species at Risk

If the Florida reef gecko is indeed as threatened as the authors’ data imply, that means we may need to act fast to protect what’s left of them. But how do you save a species hardly anyone knows about?

“If you don’t know what it is, you won’t want to protect it,” said Rangel Diaz, a recreation specialist in the Conservation and Learning Department at the Deering Estate in Miami.

Diaz said visitors to the 180-hectare Deering Estate protected area rarely know what Florida reef geckos are. “Most people don’t ever see them,” he said, though the geckos have been known to make their way into the bathrooms and staff offices. Preserved areas like Deering Estate, a tropical hardwood hammock ecosystem, still foster thriving populations. The preserve is elevated above sea level, making it less at risk to storm surges during hurricanes than other nearby coastal areas.

The reef gecko population at Deering Estate supports the idea that a micro reserve conservation approach may help protect local populations. Micro reserves are small patches of protected area, which seem well-suited to the geckos, the authors say.

However, Clements said it’s still uncertain whether the approach would be successful. Small habitat patches have greater “edge area,” which could invite unintended consequences like higher rates of predation. Indeed, maps of the gecko’s existing habitat show severe fragmentation, which can increase these “edge effects,” isolate populations, and limit genetic diversity by restricting breeding opportunities.

The researchers submitted a listing petition making the case that state officials include the Florida reef gecko as an endangered or threatened species. Based on International Union for Conservation of Nature criteria, the gecko’s Florida populations could be endangered, Clements said. But while state and federal criteria include variables such as population size, range size, and distribution, she said they do not include variables accounting for climate change or sea level rise.

“It’s easy for a population that is potentially genetically important to just go extinct without anyone noticing, if the whole species is considered to be not at risk,” Powell said.

Others in the scientific community are unsure the state will grant conservation status to the species, because the question of its origins—and whether it is in fact native—remains up in the air.

Historical accounts of the species in Florida date back to the 1850s, not long after Key West officially became a US territory in 1822, supporting one theory that humans accidentally introduced the geckos from Cuba via cargo ships. Another hypothesis is that it was a “wave species,” Nielsen said, blown to the Florida mainland from the Caribbean islands via hurricanes.

“The genetics suggest that they are native … that originally they colonized Key Largo, not Key West,” said Powell, who studies speciation.

While the data still require DNA samples from Cuban populations, her findings could refute the existing hypothesis that the species was introduced to Florida.

“Sphaerodactylus geckos are great colonizers, they’re really good at getting across bodies of water, and they’ve done it all over the Caribbean,” Gamble said. “Depending on how unique they are, that will determine what level of effort is necessary to keep them a part of the fauna of South Florida.”

For now, gecko enthusiasts can only hope the nimble S. notatus will stick around long enough for people to learn its name.

“We should probably start doing things now to protect it,” Diaz said, “because [if not] we’re going to lose it.”